In recent years, Tucson has begun to emerge from the shadow of Phoenix. Tucson's temperate winter and spring and its five-star resorts contribute to making tourism the third-largest industry of the local economy. In this article, we provide an overview of Tucson and the recovery over the past two years during the pandemic, provide a snapshot of overall existing supply in both Tucson and Phoenix, and analyze transaction trends in both cities. 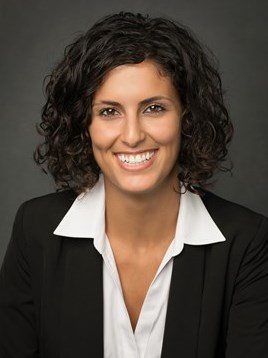 Prior to the onset of the COVID-19 pandemic, Tucson’s lodging industry was reaching new heights. After eight years of growth spurred by a large-scale expansion at Raytheon Technologies, the relocation of Caterpillar and Hexagon to Tucson’s revitalizing downtown, and growth at the University of Arizona, performance had reached a new peak. This positive trend reportedly continued through the first months of 2020, which included the Tucson Gem & Mineral Show in February; however, the hotel industry begun to be affected by the COVID-19 pandemic mid-March. As travel restrictions were enacted across the world and nation, and within the state, companies suspended travel, and groups canceled or postponed events. Locally, the Jehovah’s Witnesses convention—the city’s second-largest citywide convention—was shifted to a virtual, online event. Occupancies dropped to historical lows as a result of the sudden dearth of lodging demand.

Nevertheless, lodging activity began to pick up following the expiration of the state’s stay-at-home order in the summer of 2020, as Arizona hotels benefited from having fewer restrictions than neighboring states. Furthermore, the State of California did not permit any sporting events to be held during 2020; as a result, many leagues relocated tournaments to private facilities in Arizona. Additionally, many people chose to relocate to Tucson temporarily or permanently during the pandemic. This factor, combined with Raytheon’s continued hiring efforts and Tucson’s increasingly limited housing supply, contributed to a surge in extended-stay demand. Moreover, hotels on Tucson’s south side have benefited from expansions within the logistics and manufacturing industries, due in large part to the growth of online shopping during the pandemic. Tucson’s full-service hotels and luxury resorts were affected the most by the COVID-19 pandemic, similar to national trends, given their dependence on meeting/group demand and business travel.

The Tucson Gem & Mineral Show was canceled for 2021, and while many of the smaller ancillary shows still took place throughout the city, hotel operators reported demand far below typical in early 2021; in addition, the Jehovah’s Witnesses convention was again held virtually. However, with the rollout of vaccines in 2021 and the resulting decline in COVID-19 infections and deaths, leisure demand continued to grow, and corporate and meeting demand began to return to the market. Furthermore, the Kino Sports Complex, which underwent a $31.2-million expansion project that was completed mid-year 2020, and other attractions reopened in 2021, boosting tourism.

In the third and fourth quarters of 2021, leisure demand was registering well above 2019 levels, while corporate and meeting/group demand was experiencing a more robust recovery than the months prior. ADR growth was strong through the second half of the year, primarily attributed to the influx of higher-rated leisure demand, as well as the ramping up of the recently opened, higher-end, fresh product offerings, such as the Graduate Hotel Tucson in October 2020, Home2 Suites by Hilton Tucson Airport in March 2021, DoubleTree by Hilton Tucson Downtown Convention Center in March 2021, and the dual-branded Hampton by Hilton and Home2 Suites by Hilton Tucson Downtown in August 2021. Prior to the pandemic, Tucson had been struggling with the lack of new, fresh product in the market, limiting ADR growth and the city’ ability to attract larger conventions. The opening of these hotels has already started to illustrate the market’s ability to command higher rates, as older products are being shifted out of inventory and converted into other uses, such as multi-family, affordable housing, and homeless shelters.

In the year-to-date period through April 2022, Tucson experienced tremendous growth in both occupancy and ADR levels, according to the Arizona Office of Tourism and STR. Per the Statewide Lodging Performance Report for the first quarter of 2022, Metro Tucson experienced a 40% (rounded) increase in demand and a 50% (rounded) increase in ADR over the levels registered during the same quarter in 2021, and well above those attained in 2019. Hoteliers are beginning to report a flattening in leisure demand following Tucson’s peak season, which extends from late February through April. During that time, the number of scheduled events throughout the area spiked, drawing thousands of travelers to the area. We note that the Tucson Gem & Mineral Show, which was held in early 2022, achieved about 75% attendance and economic impact of its pre-pandemic levels.

The month of May and the fall months represent shoulder periods but still attract strong levels of visitation given the favorable climate. The hot summer months and cooler period of December through early January are considered the area's off-season. During the off-season, weekend occupancy can still remain high; however, hotel operators typically offer significant rate discounts and group incentives to attract travelers. We note that the Jehovah’s Witnesses convention is being held virtually again in 2022, but the event is planned to return to the market in 2023. Officials at Visit Tucson report a strong booking pace through the remainder of the year to make up for the loss of this significant convention business.

As we close out the spring season and enter into summer, local hoteliers report that ADRs have begun to flatten out, and the rate of growth for the remainder of the year is expected to be lower than what was achieved earlier in the year; nevertheless, ADR growth for the entire year is projected to be notable. Given recent trends, Tucson’s occupancy should fully recover by 2023, and ADR is anticipated to grow at the rate of inflation thereafter. Our conversations with Visit Tucson, the Tucson Metro Chamber, and hotel owners and operators throughout Tucson have revealed no major shifts in demand fundamentals; additionally, market participants are optimistic for the future of the industry in Tucson.

According to STR, the Pima County lodging market consists of 160 hotels with roughly 16,200 rooms, including full-, select-, and limited-service product types of all classes, representing branded and independent options. The following chart illustrates the mix of current hotels in Pima County by percentage of market share.
Pima County Existing Hotel Supply by Chain Scale 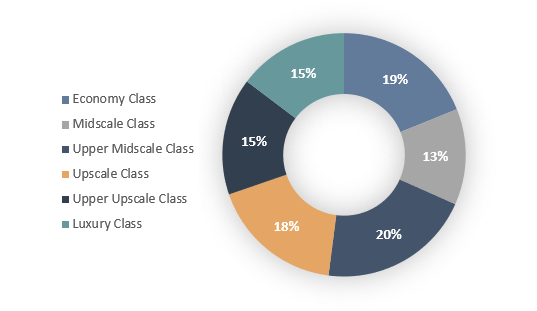 Source: STR
While there is an even distribution mix of market share for all chain scales in Pima County, Maricopa County contains a higher percentage of upscale and upper-upscale hotels in the greater market. The Maricopa County lodging market consists of 505 hotels with roughly 67,000 hotel rooms.
Maricopa County Existing Supply by Chain Scale 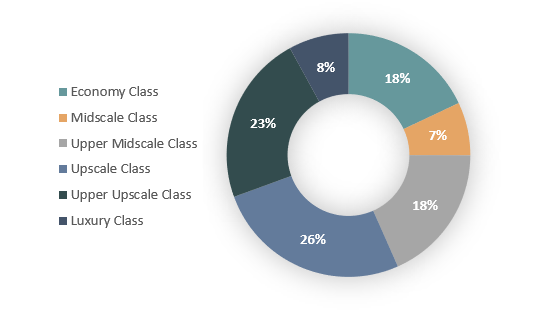 Tucson has begun to evolve in terms of expanding its higher-end hotel supply. The majority of recent openings have been in the upper-upscale range, while many of the hotels under construction, planned, or speculative within the market are in the upscale and higher chain-scale classes. These projects, although some speculative in nature, illustrate a high level of interest in the Tucson market. The addition of higher-end properties should also support strong ADRs, particularly during peak season. Based on our conversations with the planning offices in Tucson and Pima County, hoteliers and developers across the region, and our development reports, we have created the following map to illustrate the hotel developments in the pipeline, including speculative, under construction, approved, and projects on hold in the region. While BuildCentral typically includes projects that may be speculative or that may solely comprise a pad site in a larger development, the data provide a good representation of development in a region.
Regional Development 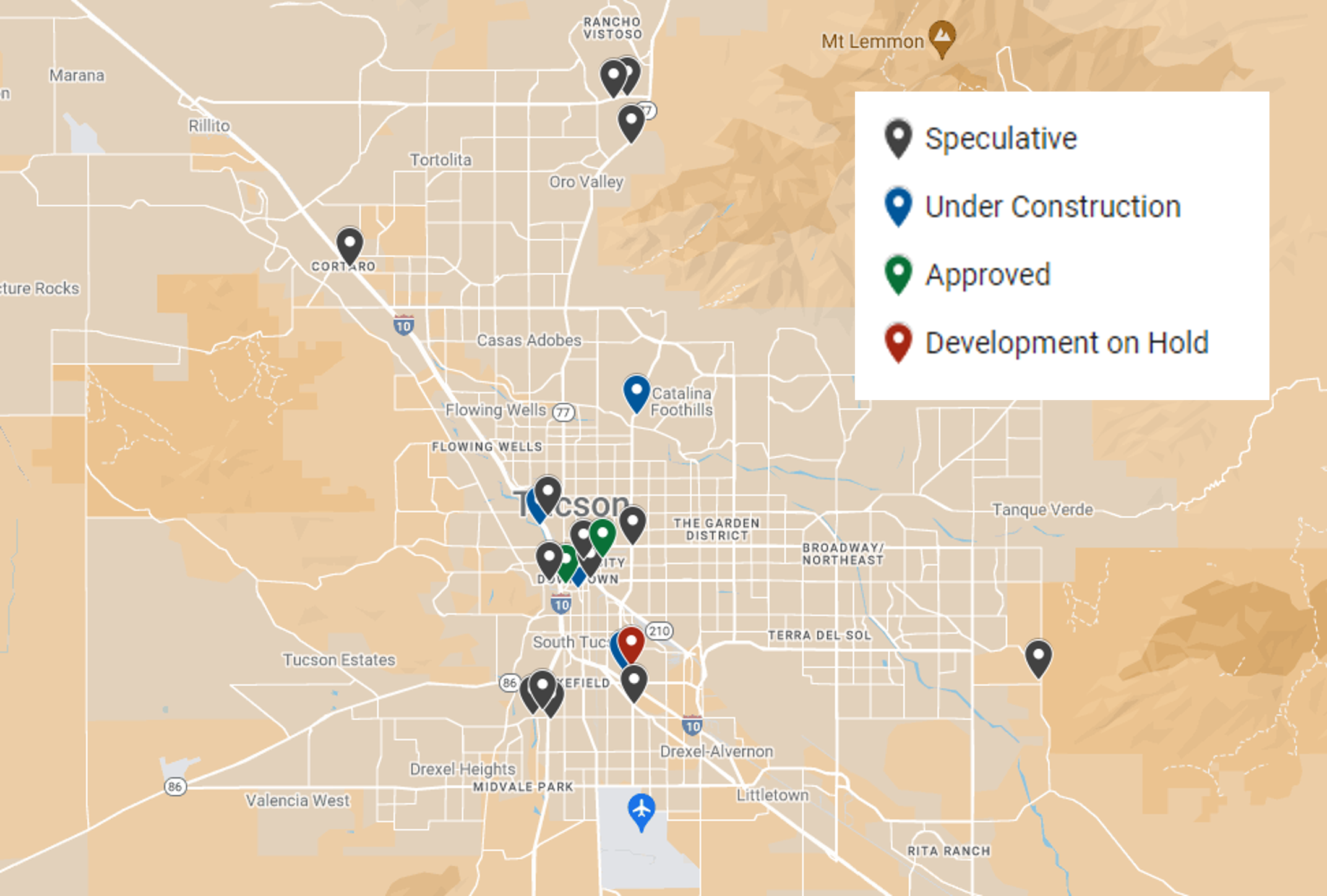 Hotel transaction volume in Pima and Maricopa Counties has fluctuated over the past seven years, from a high of 12 hotel sales in Pima County and 40 hotel sales in Maricopa County in 2015, to a low of 3 hotel sales in Pima County and 15 hotel sales in Phoenix in 2020. Both markets experienced a notable rebound in 2021, with many of those transactions related to property conversions, including multi-family, affordable housing, or homeless housing investments. The average price per key has also fluctuated given a range of factors including the mix of limited-service, full-service, and resort hotel sales, as well as a number of properties that were purchased for renovation; many hotels in the market had some level of deferred maintenance related to Tucson’s delayed recovery from the Great Recession, which allowed them to be bought at a discount before major renovations were undertaken.
Pima County Transactions

While slow to recover from the last recession, Tucson has experienced growth over the past few years. Our market interviews and research revealed that the stability of the healthcare sector and growth in student enrollment at the University of Arizona prior to 2020 helped support the market through the heights of the COVID-19 pandemic. Furthermore, many of the institutions and corporations within this area, such as the University of Arizona, IBM, Caterpillar, and Raytheon Technologies, are world-renowned entities working with a multitude of clients or partners. The market has nearly recovered from the pandemic, with a strong return of leisure demand despite key special events being canceled or downsized in 2021, including the Tucson Gem & Mineral Show. Sporting events at the Kino Sports Complex and the return of tourism from Mexico since the reopening of the U.S. border have been other key contributors. Thus, the outlook for the greater Tucson market is positive.

This article was originally published in the June 2022 issue of TREND report (available with a subscription).

Zabada Abouelhana, a Senior Manager based out of our HVS Dubai office, graduated from the School of Hotel Administration at Cornell University in 2017; she holds a Bachelor of Science in Hotel Administration. In 2019, Zabada joined HVS in the HVS St. Louis office, working on a wide variety of assets in both the Heartland region and across the USA. In 2021, she relocated to Phoenix, Arizona in order to lead that office, working across the Southwest region of the USA, primarily in Arizona, Utah, and Nevada. In mid-year 2022, Zabada relocated to the Dubai office, where she works on a wide variety of complex hospitality assignments across the Middle East and Africa. Zabada focuses on consulting, valuation, and advisory for hotels in the greater region.

HVS is the nation's leading consulting firm that is laser-focused on the hospitality sector. The firm provides expertise through every phase of ownership across a wide range of hospitality assets. We help clients succeed in the complex consulting arena, from feasibility studies to exit strategies and everything in between.

In recent years, Tucson has begun to emerge from the shadow of Phoenix. Tucson's temperate winter and spring and its five-star resorts contribute to making tourism the third-largest industry of the local economy. In this article, we provide an overview of Tucson and the recovery over the past two years during the pandemic, provide a snapshot of overall existing supply in both Tucson and Phoenix, and analyze transaction trends in both cities. %%ViewCount%% Views Comments
Share:
Subscribe To Newsletter