On Track for Recovery in Indianapolis

Following the devastating effects of the COVID-19 pandemic on Indianapolis’s hospitality and tourism industries, a recovery is well underway, led by leisure demand generated by the city’s sporting and entertainment events and the return of meeting and group demand.

Following a record-breaking year in 2019, the hospitality sector in Indianapolis experienced a devasting blow in 2020 because of the COVID-19 pandemic. Downtown Indianapolis was particularly hard hit due to its heavy reliance on citywide conventions, sporting events, and other events to fill hotel rooms. However, as restrictions were lifted and leisure travel, in particular, began to rebound, the market saw improvement in 2021. While occupancy levels remained well below 2019 levels, average rate increased significantly, resulting in healthy RevPAR growth. This rate growth was driven largely by the opening of the Bottleworks Hotel in late 2020 and the Hotel Indy, a Tribute Portfolio Hotel in October 2021. 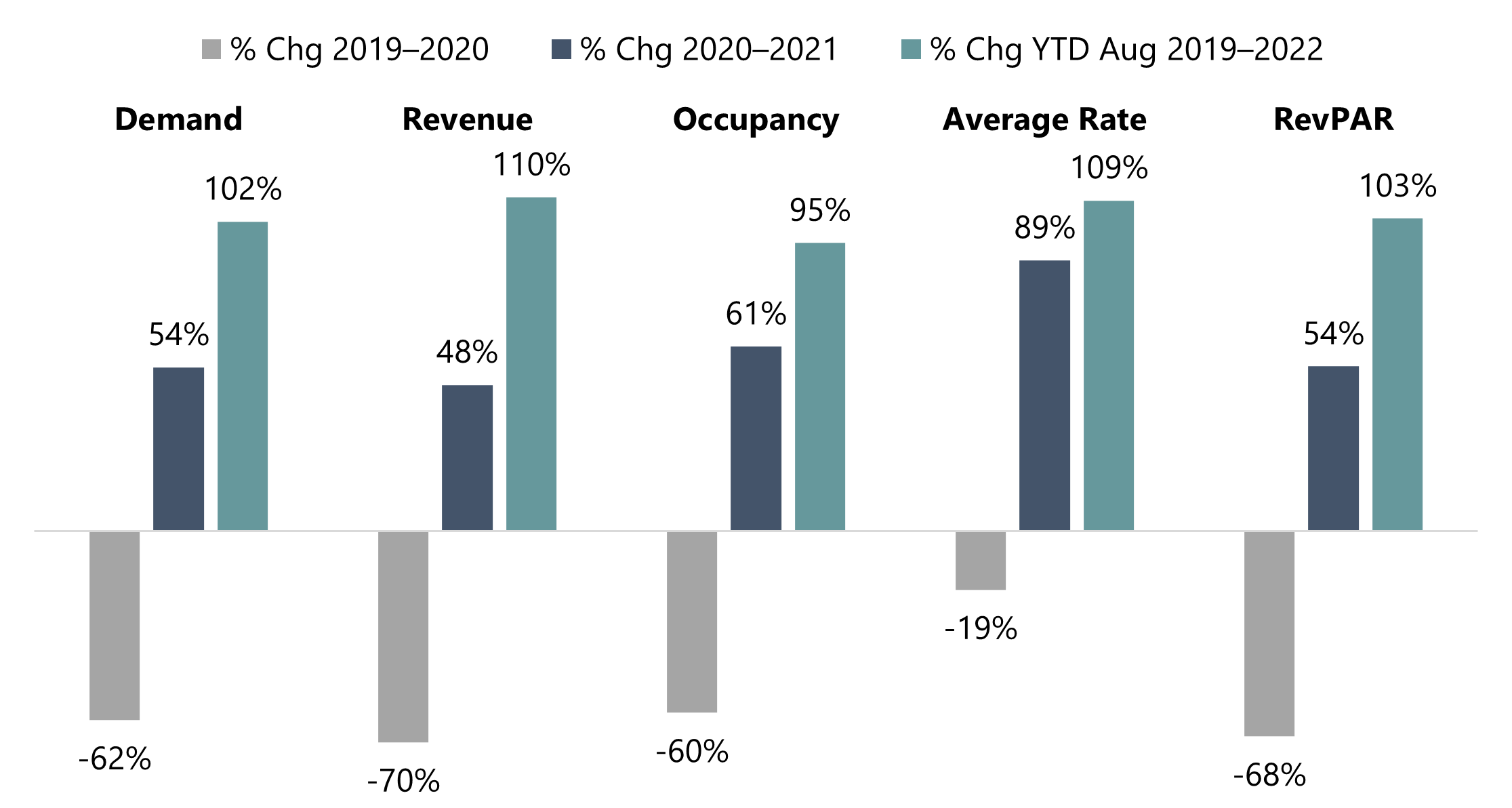 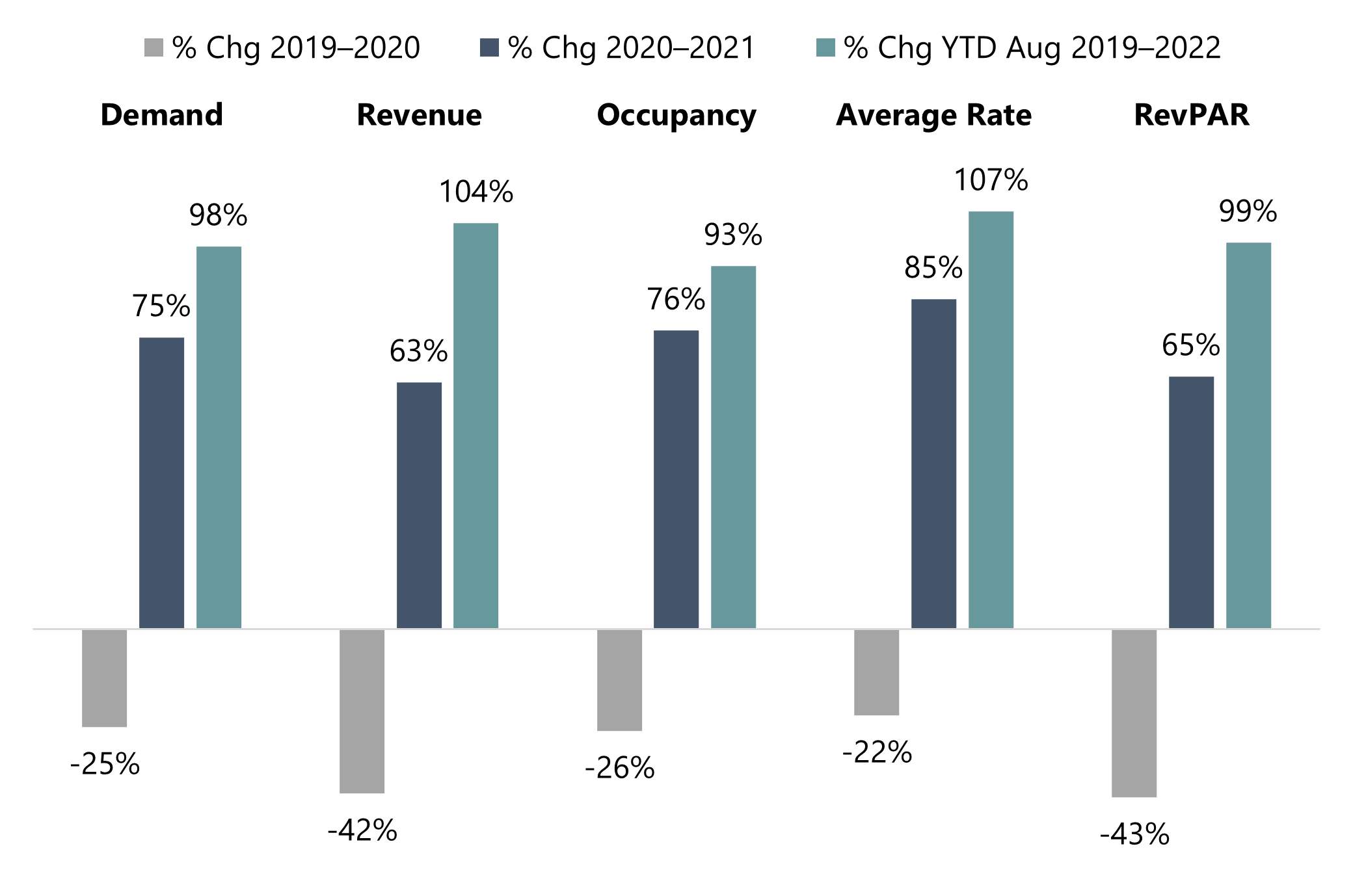 Indianapolis is on track for an even stronger recovery in 2022, bolstered by strong leisure demand and increased meeting and group demand. Some events that have generated significant room nights this year include the Indianapolis 500, NCAA March Madness, and the 2022 College Football National Championship game. Most notably, the Indianapolis 500 was held without capacity limitations for the first time since 2019. More than 325,000 people attended the race, making it the highest-attended single-day sporting event in the world since the beginning of the COVID-19 pandemic. 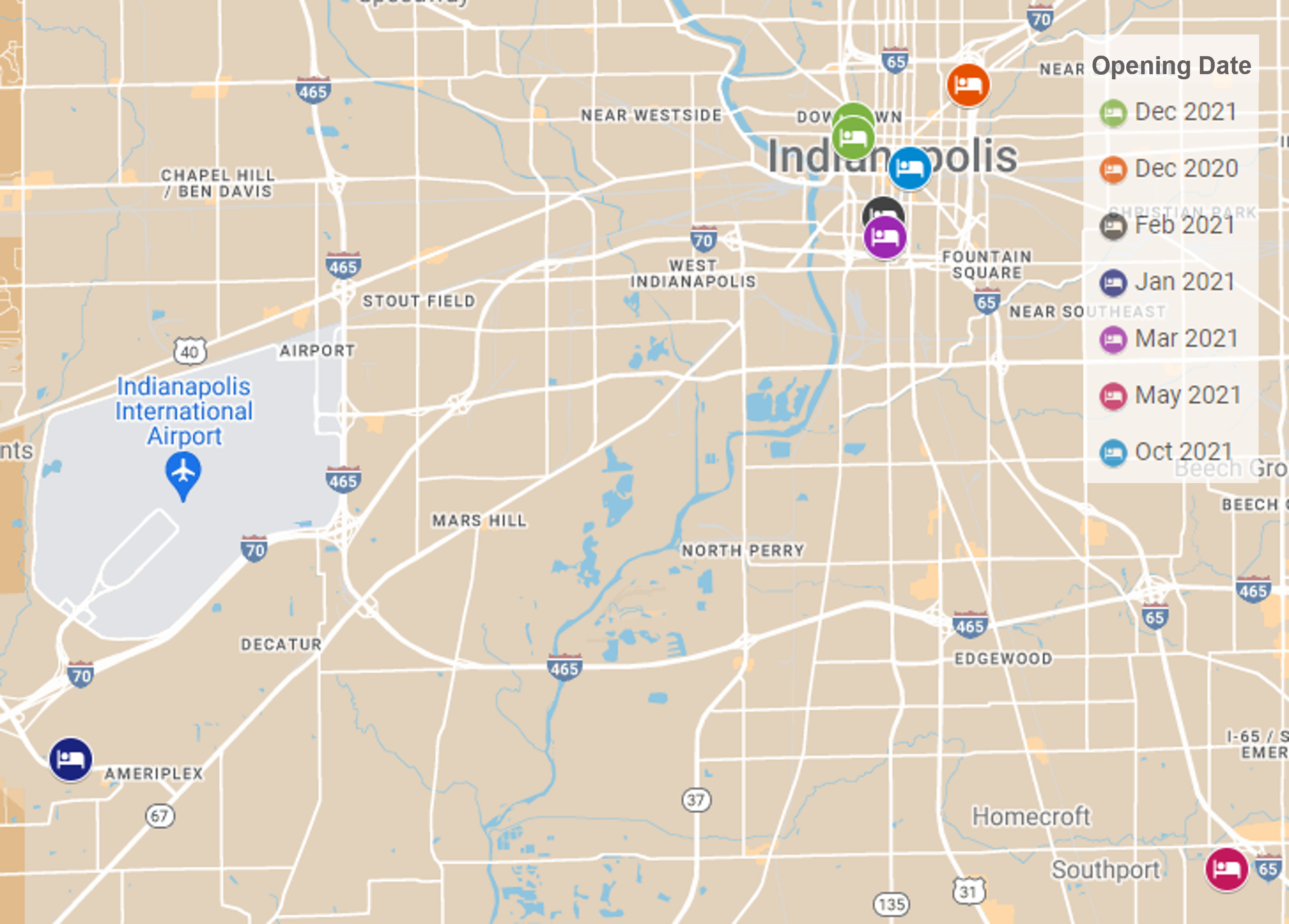 The supply pipeline has slowed, with no new projects expected to open in 2022; however, several notable projects are either already under construction or expected to break ground in the near future, including the 800-room Signia by Hilton hotel, which is being developed by Kite Realty Group in conjunction with the expansion of the Indianapolis Convention Center. According to Inside Indiana Business, Kite is expected to complete all pre-construction and financing work by the end of this year. The hotel and convention center addition should open in early 2026; a later phase is anticipated to include a 600-room Hilton-branded hotel adjacent to the Signia. Multiple major conventions, including the American Dental Association and GenCon, have committed to the city, contingent upon the completion of the expansion and opening of the Signia.

The following map shows the proposed new supply in various stages of development. 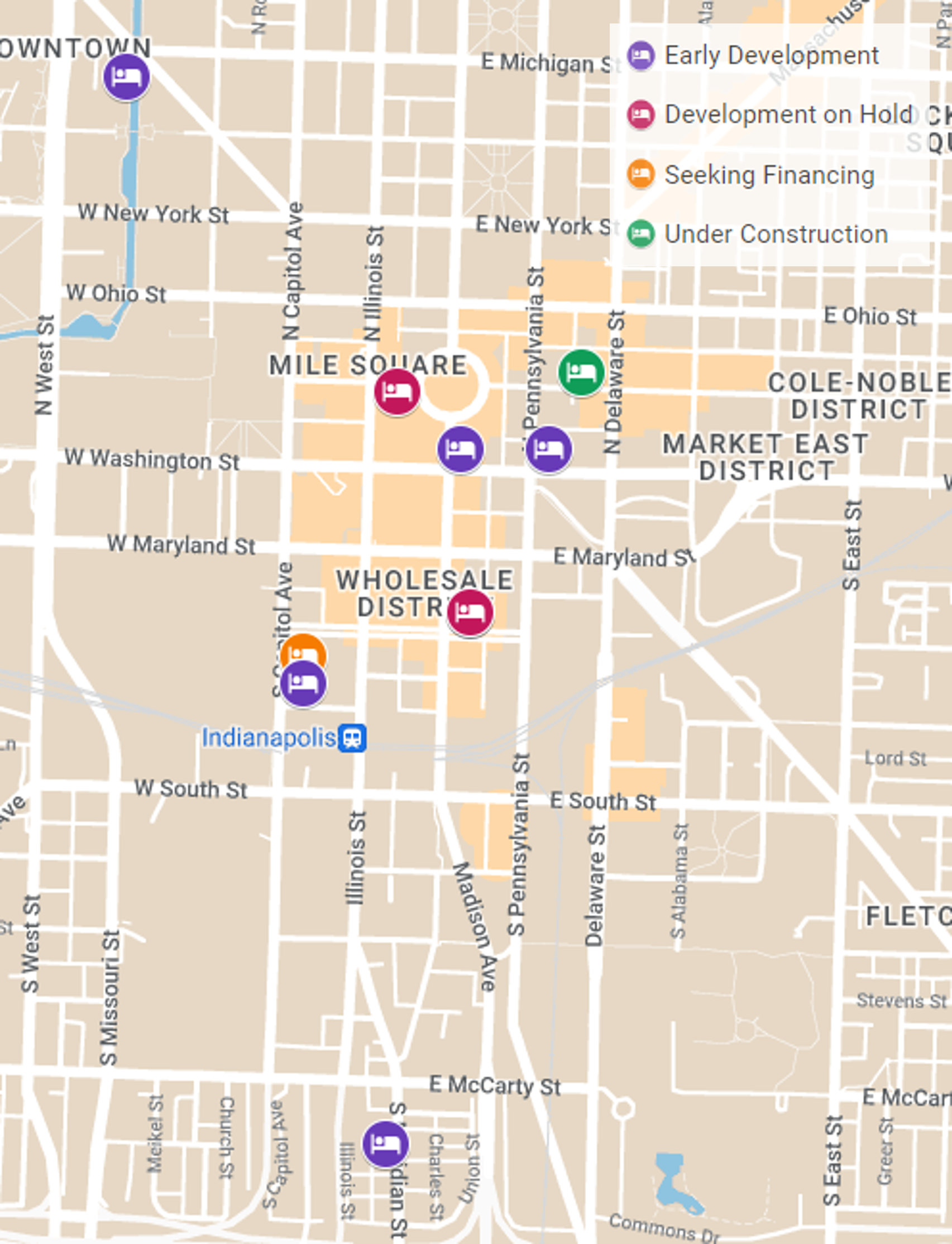 Other projects under development that will further drive increases in demand are listed as follows.

$30 million – Estimated Opening 2023
Bicentennial Unity Plaza will feature a community basketball court that will be converted seasonally to an ice rink, community-based public programming, and new public art thanks to a $28.47-million grant from Lilly Endowment Inc.

$50 million – Estimated Opening 2023
The Fall Creek Pavilion at the Indiana State Fairgrounds will include a 196,000-square-foot, multi-use building that will host a variety of livestock, consumer, and sporting events throughout the year.

$1 billion – Estimated Opening 2025
The Eleven Park site comprises 20 acres of land southwest of the convention center. The development will be anchored by a 20,000-seat professional soccer stadium, which will be the home of the USL soccer team the Indy Eleven. This development is also expected to include retail and office space, apartments, and a boutique hotel.

$175 million – Estimated Opening 2025
The historic City Market will be redeveloped with an improved parking garage and the conversion of alleyways into walking trails. A new 10,500-square-foot glass enclosure of the City Market building will offer more event and entrepreneurial space.

For more detailed forecasts or to inquire about a specific hotel project, contact Brian Arevalo.

Jane Rogers contributed to this article.

Brian Arevalo, Senior Vice President with HVS, is the leader of the HVS Chicago office. Brian earned his masters degree from The University of Texas at Austin’s McCombs School of Business. Brian’s prior work in hospitality includes roles in hotel operations and corporate finance. In addition to work in Chicago, he contributes to and helps manage engagements throughout the Midwest, including markets such as Indianapolis, Columbus/Dayton, Cincinnati, and Louisville, among many others. Contact Brian at (817) 680-7666 or [email protected].

Following the devastating effects of the COVID-19 pandemic on Indianapolis’s hospitality and tourism industries, a recovery is well underway, led by leisure demand generated by the city’s sporting and entertainment events and the return of meeting and group demand. %%ViewCount%% Views Comments
Share:
Subscribe To Newsletter