Despite several headwinds such as inflationary pressure, the possibility of a recession in the US and Europe, and a manpower shortage, the Indian hotel industry’s performance outlook remains positive. Read on to know more.

After months of low occupancy and falling average rates due to the pandemic, the Indian hotel industry is finally witnessing renewed growth. The upcycle is clearly underway and is expected to last for the next 4-5 years, as demand is spiraling while supply growth is relatively low, which is a significant difference from the previous upcycles in the industry. This augurs well for the industry because, as shown in the graph below, hotel performance in India is highly sensitive to supply and demand dynamics.

The industry’s golden age was from the calendar year 2000 to 2005. Following the September 11 attacks in 2001, the industry began to experience unprecedented increases in both occupancy and average rates, unlike any that had ever happened before. Domestic travel in the country began to increase as outbound travel was disrupted by the SARS epidemic in 2002 and the beginning of the US-Iraq war in 2003. As a result, demand increased at a CAGR of more than 11% during this period, while supply increased at a slower pace of 6.3%, which helped drive up occupancy by nearly 15 percentage points and RevPAR by almost 13%.
Indian Hotel Industry: Supply, Demand, and RevPAR Trend 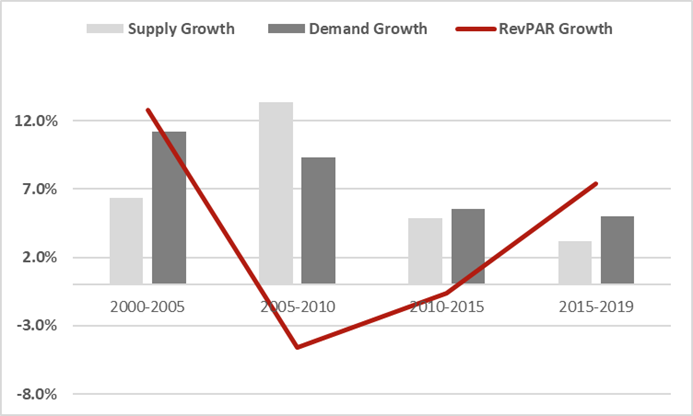 Source: HVS Research
The 2005-2010 period was a mixed bag for the industry. The strong economic growth in India began to fuel hotel demand, which increased by double digits during the first three years of this period, helping average rates to peak in 2007. The strong demand growth and industry performance prompted hoteliers across the country to set up new properties. However, the Great Financial Crisis in 2008 set the stage for the sector's decline, which, combined with the terror attacks in Mumbai that year, resulted in slower growth in demand until 2009. This, combined with the overhang of supply growth, which was largely concentrated in the country's key hotel markets, began to put pressure on hotel occupancy and average rates. As a result, while demand increased by more than 9% from 2005 to 2010, supply growth was significantly higher at 13%, which caused RevPAR to decline by almost 5% during this time. This pattern persisted throughout the 2010–2015-time frame.

The performance of the industry reached a turning point in 2015 when demand reached a peak of almost 10% and the supply growth rate began to slow down after years of rapid growth, resulting in a 6% increase in RevPAR. Beginning 2015, the industry witnessed continuous growth in RevPAR with a CAGR of 7.4%, however, the COVID-19 pandemic abruptly ended this upcycle in March 2020. Since then, the industry has come a long way, with demand and performance consistently improving over the last year, implying that the next growth cycle is underway. Despite a myriad of headwinds such as inflationary pressure, the possibility of a recession in the US and Europe, and a manpower shortage at play, the industry’s performance outlook remains positive because, unlike previous cycles, supply growth will be lower than demand growth.

According to the most recent industry data, while room demand increased by more than 60% year on year between January and July 2022, room supply increased by only 1-2%. While demand will continue to grow by double digits due to the strong domestic travel segment and a rebound in inbound tourism, we anticipate supply to grow at a CAGR of only 3-4% over the next six to seven years. Additionally, thanks to the growth of domestic leisure travel, the upcoming supply will be spread out across several locations rather than concentrated in a select few key markets, preventing a performance slowdown. These factors, combined with India's strong economic outlook, will drive continued strong performance growth in the Indian hotel industry.

Despite several headwinds such as inflationary pressure, the possibility of a recession in the US and Europe, and a manpower shortage, the Indian hotel industry’s performance outlook remains positive. Read on to know more. %%ViewCount%% Views Comments
Share:
Subscribe To Newsletter