While the hospitality industry is going through one of the roughest years of recent history, it is crucial that strategic decisions are taken considering all aspects of an owner – operator partnership. This guide features 100 operators in over 47 countries and territories in the Middle East & Africa, and aims to guide owners in understanding the scale, presence and capabilities of operators in this region. 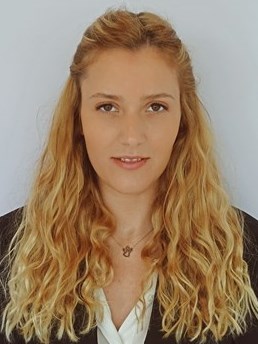 This publication aims to guide owners in understanding the scale, presence and capabilities of operators in the region. Amidst the year of the COVID-19 pandemic, owners, more than ever, need foresight in selecting the right operator to run their hotel properties. While the hospitality industry is going through one of the roughest years of recent history, it is detrimental that strategic decisions that shape the future are done with all aspects of an owner – operator partnership considered.

HVS has advised numerous owners in the decision-making process to select the right structure and operator and assist in negotiating favorable terms. Great importance is ascribed to the confidence an owner can take in the operator being familiar with the intricacies of doing business in the locale and the brand delivering the topline performance according to its positioning.

We greatly appreciate the support from all participants of this guide to provide a more comprehensive profile of our industry in the region. Should you want to participate in the next edition of the guide, please do reach out to us.

In this publication, we have captured over 346,000 existing and more than 223,600 pipeline rooms. This guide features 100 operators, in which the sample size is only including international and regional operators with more than 10 properties. Our analysis covers 47 countries and territories in the Middle East & Africa.
Figure 1: Operational Status

During the peak of the COVID-19 pandemic, we looked at the Operational Status of properties in the Middle East & Africa. Between the two markets about half of the properties remained fully operational with about a fourth of the properties closing temporarily or remaining partially operational. Among the operators considered for this publication, no permanent closures have been reported.
Figure 2: Pipeline Status (2021-2023)

Similarly, we have analyzed the status change of upcoming hospitality projects in the pipeline. Just under half of the projects in the region have been delayed or put on hold due to the implications of the COVID-19 pandemic. Additionally, about five percent of upcoming hotel projects have been cancelled all together.
Figure 3: Top 5 Existing Rooms Supply Middle East 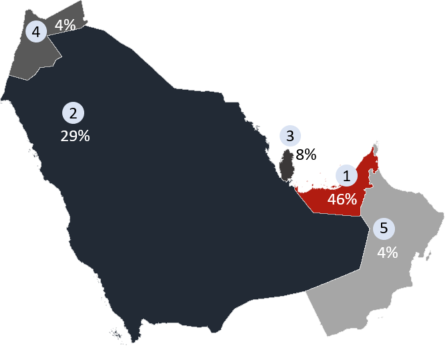 Source: HVS
Within the Middle East, the United Arab Emirates remain the strongest market in terms of existing room supply. Saudi Arabia provides the second highest number of rooms in the market on account of strong supply growth rates over the last years. Qatar falls into third place as a significant hotel market in the region followed by Jordan and Oman.
Figure 5: Top 5 Existing Rooms Supply Africa 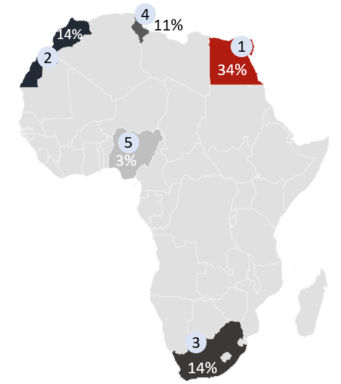 Source: HVS
Within continental Africa, the North-African countries present the highest number of rooms supply with the exception of the Republic of South Africa. Egypt represents the strongest market with 53,000 rooms. Morocco provides the second highest number of existing rooms on the continent with 21,000 rooms followed by South Africa with 20,000. Tunisia and Nigeria complete the top five with 16,000 and 5,000, respectively.
Figure 7: Top 5 Pipeline Rooms Supply Middle East (2021-2023) 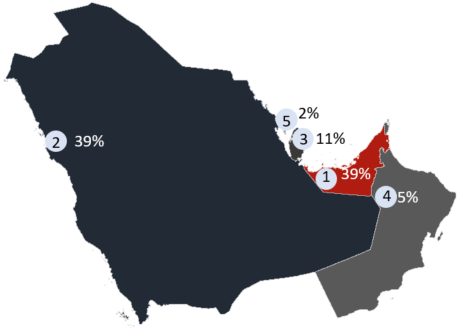 The United Arab Emirates and Saudi Arabia share the top spot of pipeline supply with about 78% of the regions upcoming hotel rooms. Qatar follows third with about 11% of the regions expected upcoming supply.
Figure 9: Top 5 Pipeline Rooms Supply Africa (2021-2023) 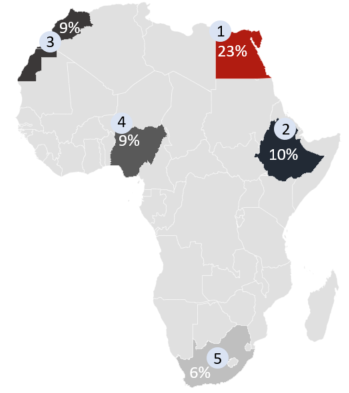 Looking at the geographical distribution of pipeline supply, Egypt leads the way with around 13,000 new hotel rooms signed, representing 23% of the total upcoming supply of the top five markets. In second place, with about 10% of upcoming rooms, sits the Federal Democratic Republic of Ethiopia.
Figure 11: Existing Rooms Supply Middle East 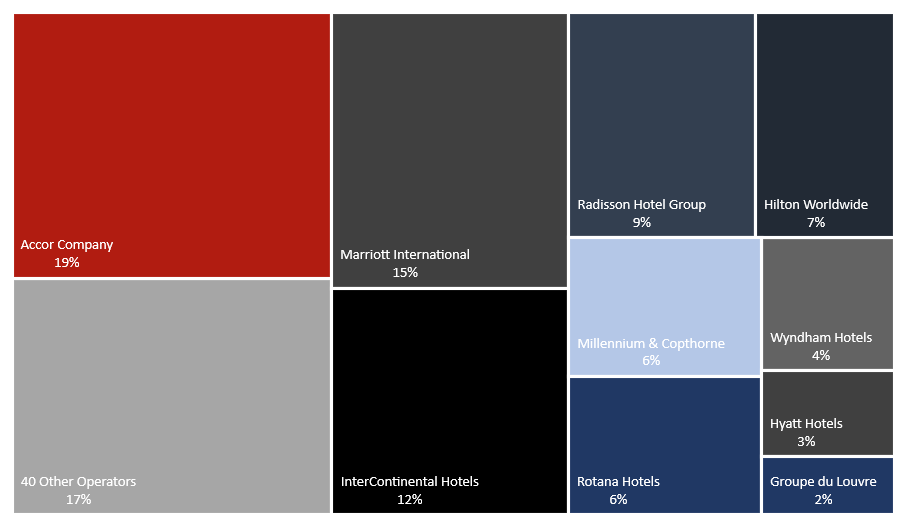 The top three recorded a market share of 46% by existing room inventory. Accor leads the way in terms of supply with about 19% of total market share. Marriott and Intercontinental Hotel Group trailed behind Accor by four percent and seven percent, respectively. The remaining supply of 54% is shared between 47 operators.
Figure 12: Pipeline Rooms Supply Middle East (2021-2023) 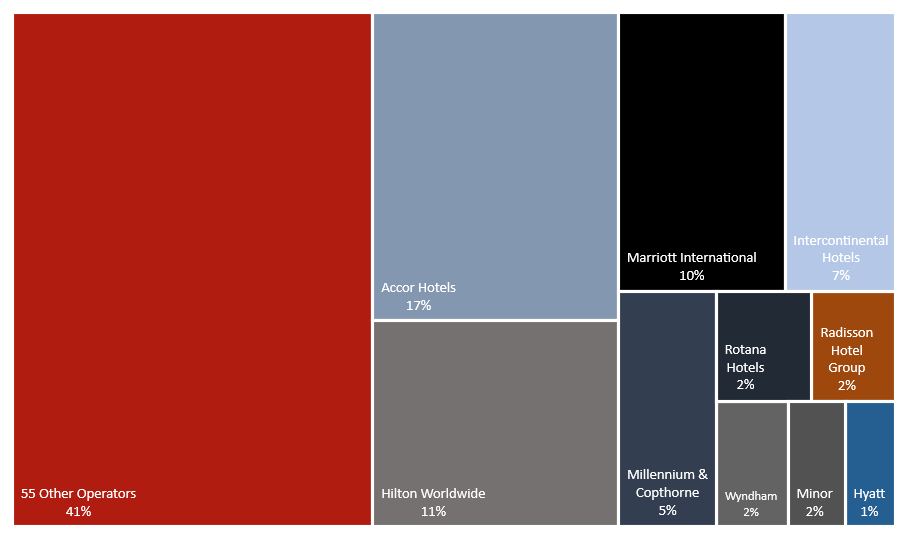 In terms of pipeline room supply, Accor leads the way with about 17% of incoming rooms under their brands. Accor is followed by Hilton and Marriott with 11% and 10% of upcoming rooms, respectively. The remaining 62% are split between 62 operators. 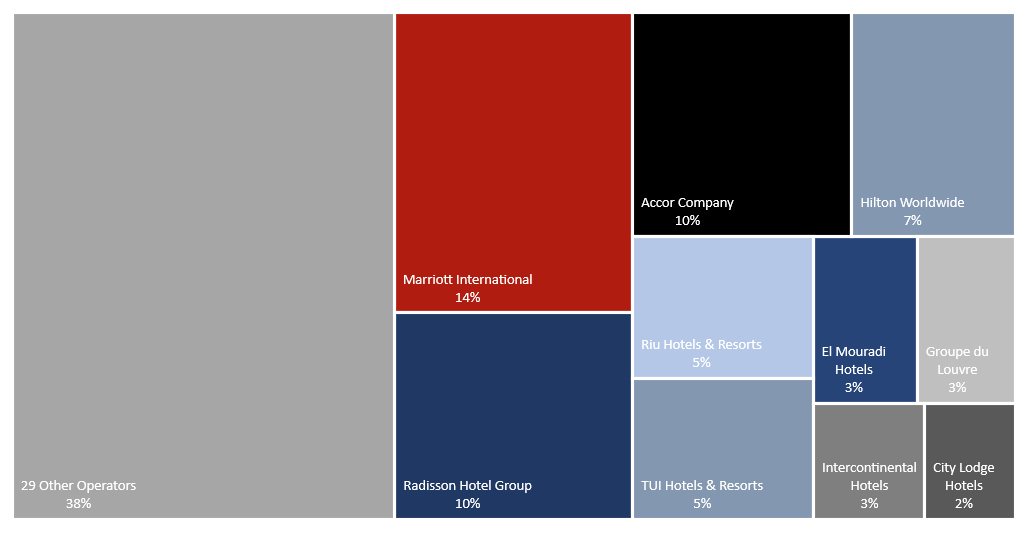 The top three recorded a market share of 34% by existing room inventory. Marriott leads the way in terms of supply with about 14% of total market share. Accor and Radisson Hotel Group trail behind Marriott by four percent. The remaining supply of 66% is shared between 36 operators including Hilton with seven percent of rooms in the region.
Figure 14: Pipeline Rooms Supply Africa (2021-2023) 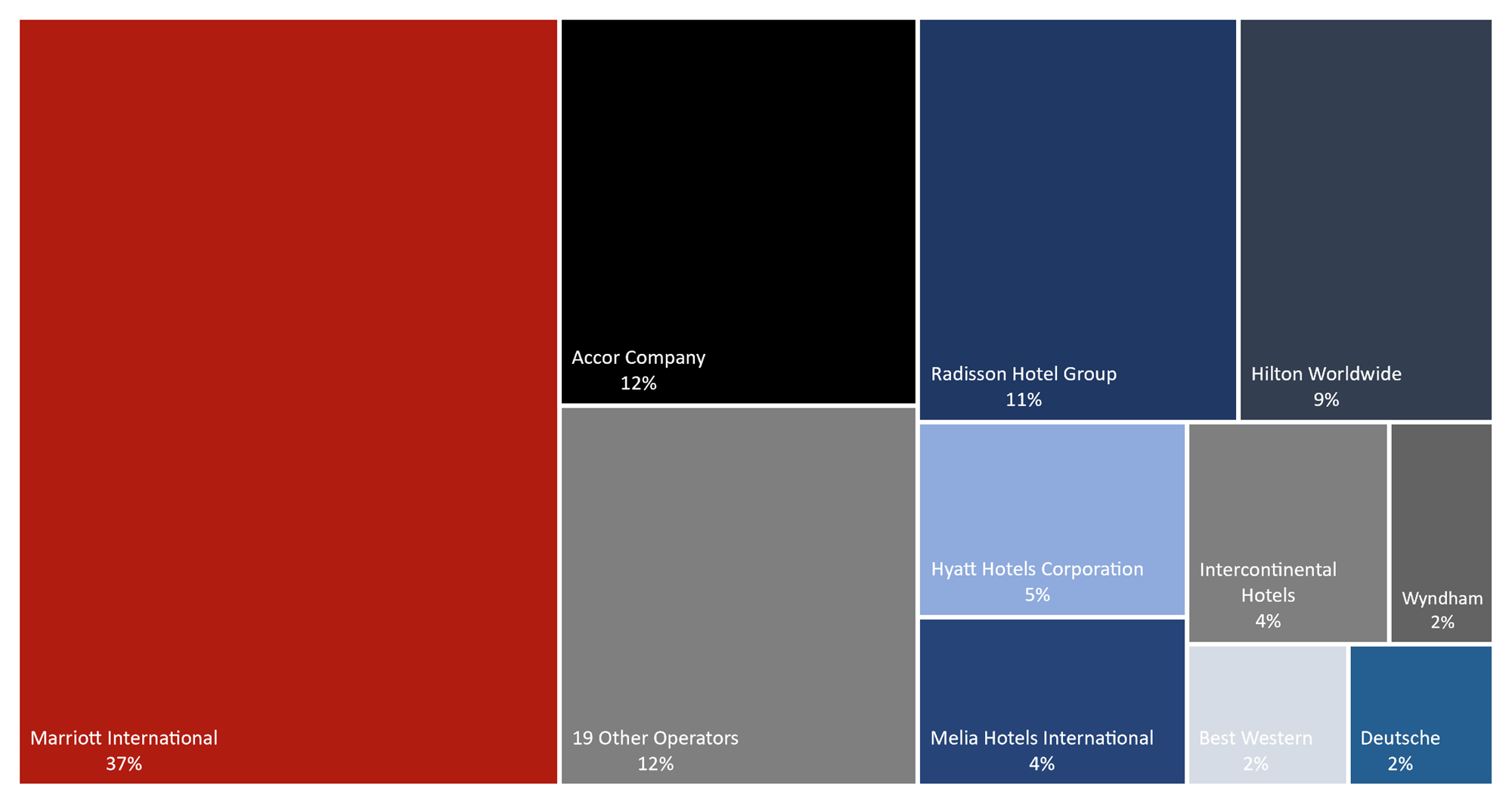 Source: HVS
In terms of pipeline room supply, Marriott International leads the way with about 37% of incoming rooms under their brands. Similar to the existing supply, Marriott is followed by Accor and Radisson with 12% and 11% of upcoming rooms, respectively. The remaining 40% are split between 26 operators. 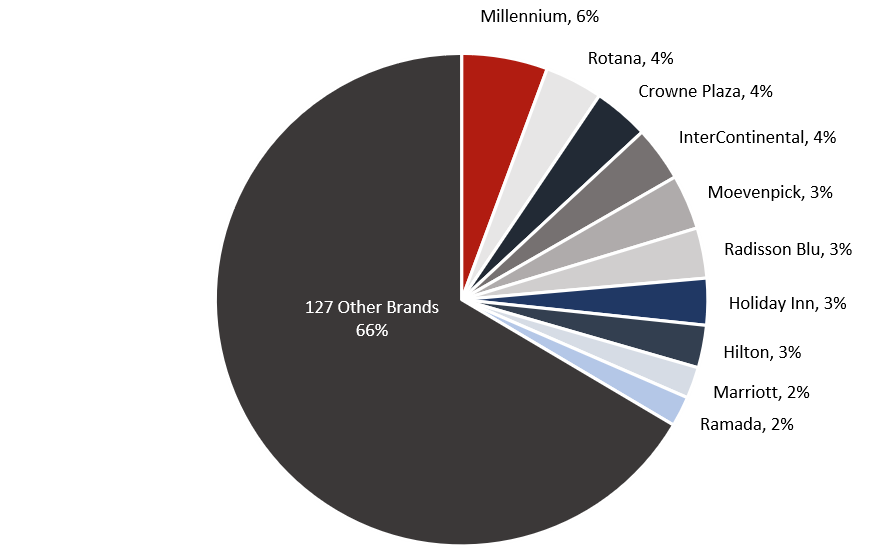 Source: HVS
Given the prevalence of multi-brand operators, the brand landscape is subject to a higher degree of fragmentation. With its notable presence in the Middle East, Millennium has the largest market share of 6%, followed by brands such as Rotana, Crowne Plaza and InterContinental Hotels, accounting for 4% each, respectively. 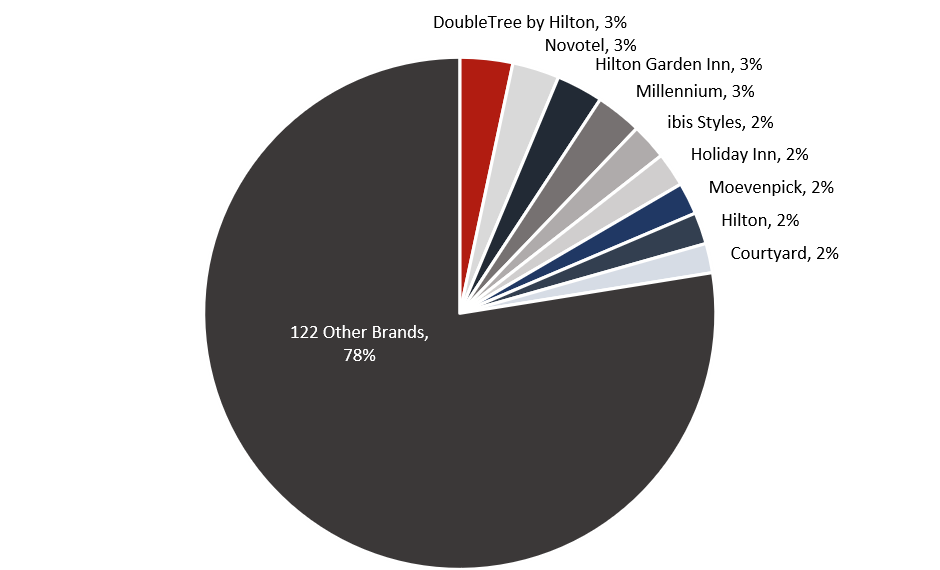 The brands prevailing in the pipeline of room supply are leading towards a midscale positioning topped by DoubleTree by Hilton, Novotel, Hilton Garden Inn and Millennium. None of the notable brands falls into the upper-upscale or luxury segments.
Figure 17: Existing Rooms Supply by Brands - Africa 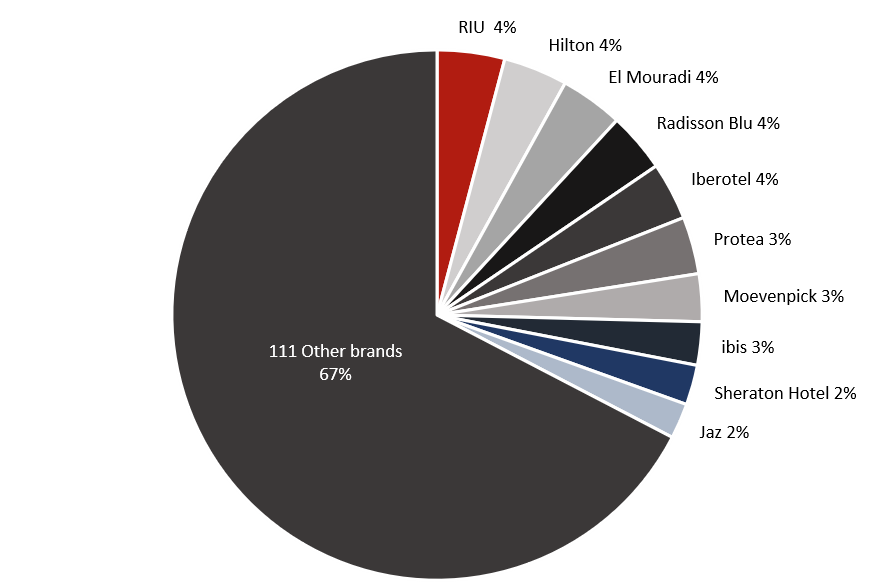 Similar to the Middle East, the brand landscape in Africa is highly fragmented. Existing room supply is dominated by upscale brands such as RIU, Hilton, Radisson and the Tunisian brand El Mouradi.
Figure 18: Pipeline Rooms Supply by Brands - Africa 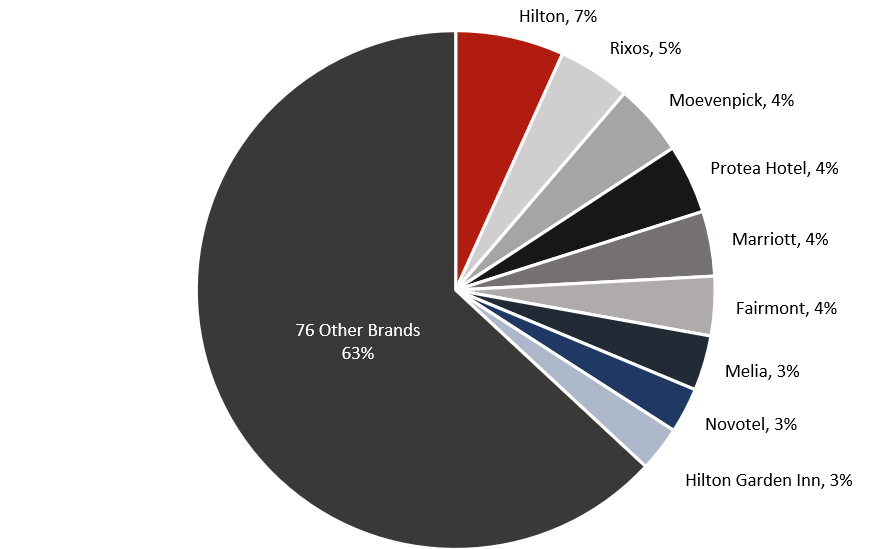 Source: HVS
The pipeline of supply is dominated by Hilton and Rixos with 7% and 5%, respectively. The remaining supply is made up of mostly midscale and upscale brands.
Figure 19: Top 10 Existing Rooms Supply by Markets - Middle East 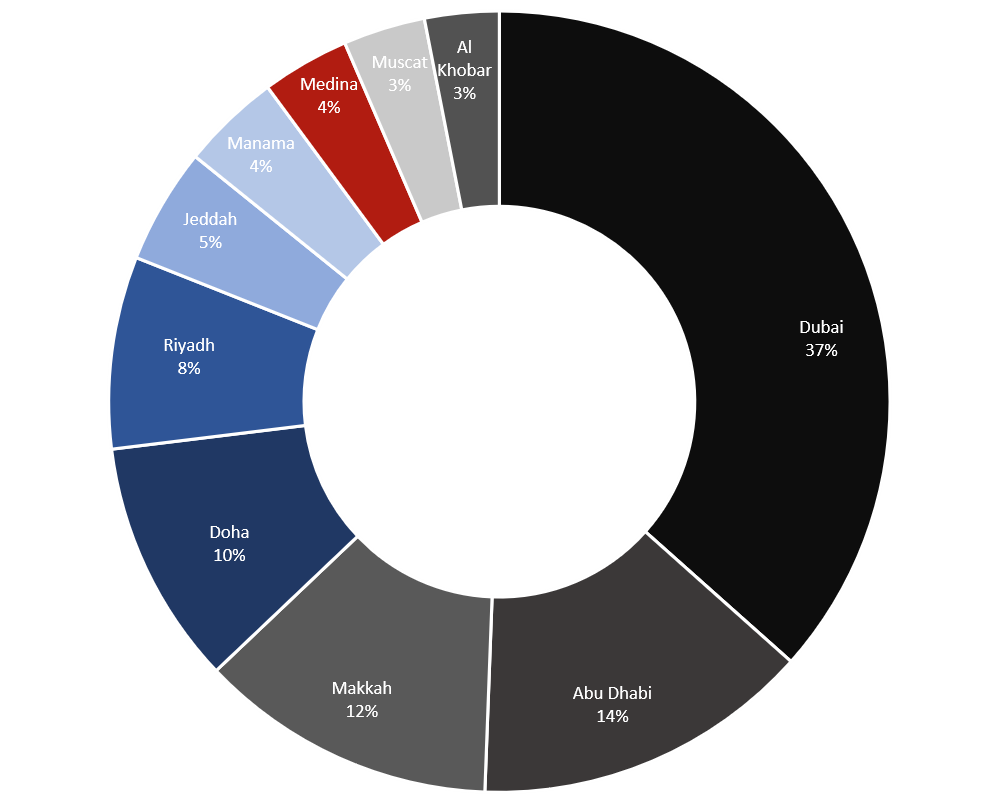 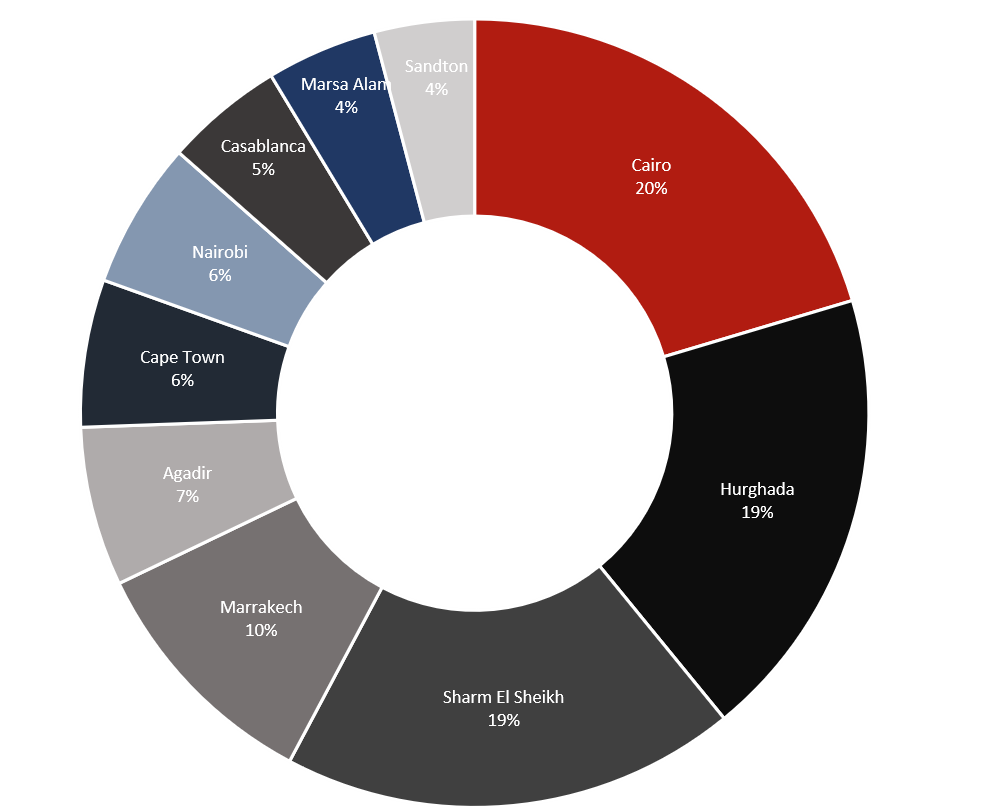 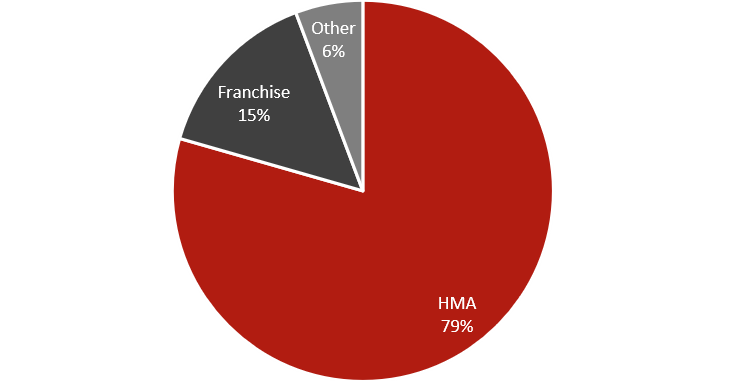 Most properties are being operated via a Hotel Management Agreement (HMA), followed by Franchise Agreements. Others management structures may include owned-operated or leased*. Taking a closer look at franchising,  most franchise agreements are established in the United Arab Emirates, Oman and Saudi Arabia. The brands strongest in franchising are typically in the budget and midscale segments.
Figure 22: Top 5 Franchise Brands by Number of Rooms - Middle East 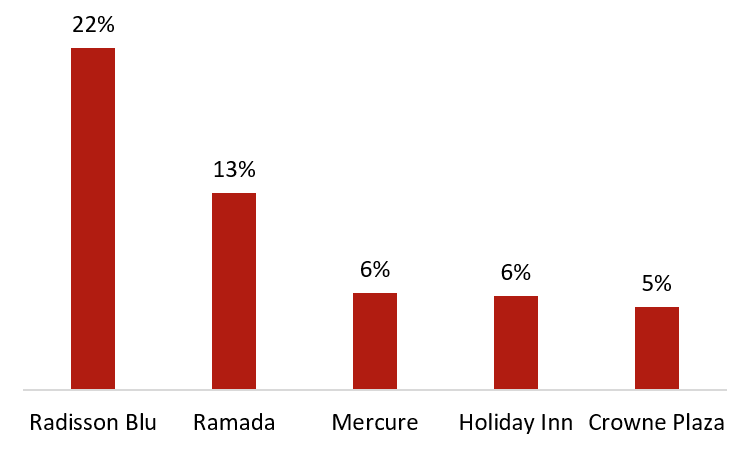 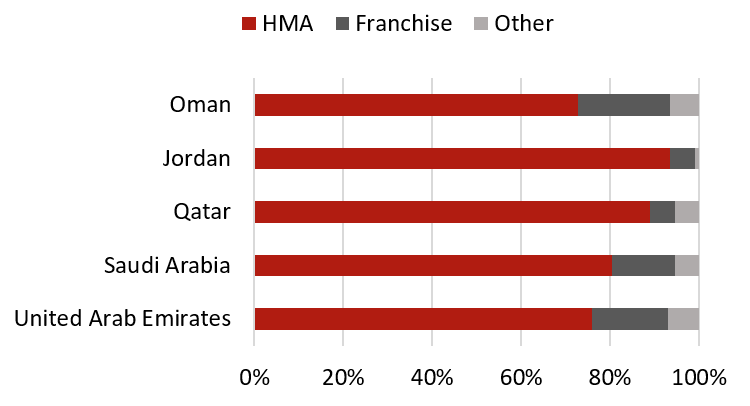 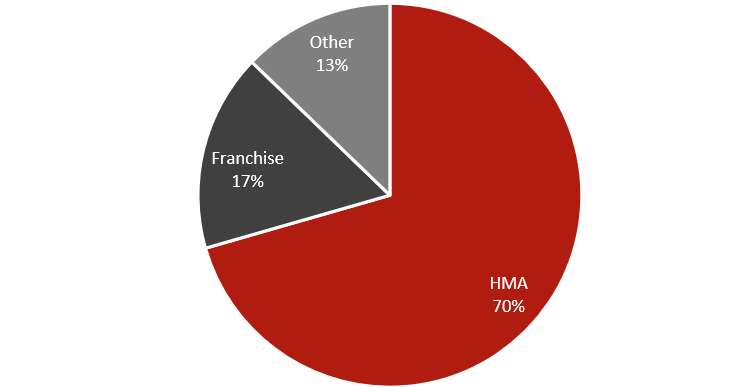 In Africa, most properties are being operated via a Hotel Management Agreement (HMA), followed by Franchise Agreements. Others management structure may include owned-operated or leased*. Radisson Blu, Iberotel and Protea represent the most franchised brands on the continent in terms of number of rooms.
Figure 25: Top 5 Franchise Brands by Number of Rooms 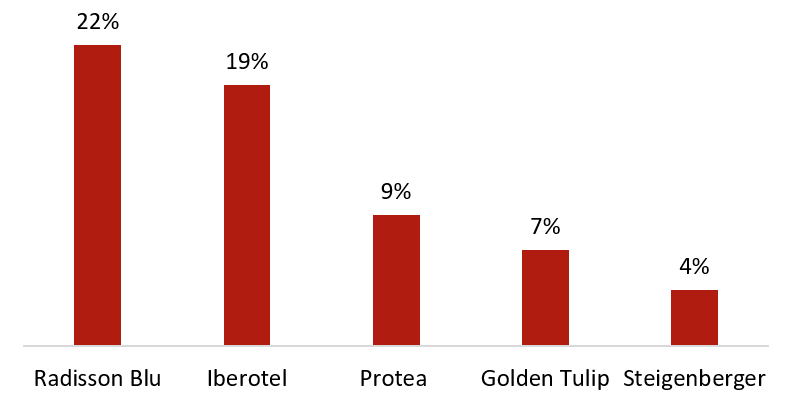 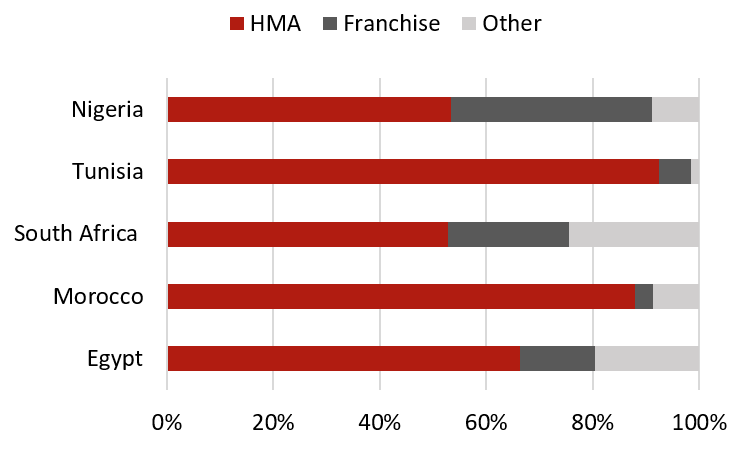 Question: Post COVID-19, do you believe there will be a major shift in trends in terms of brands' operating model in the Middle East & Africa? (management contracts, lease, franchise, etc.) 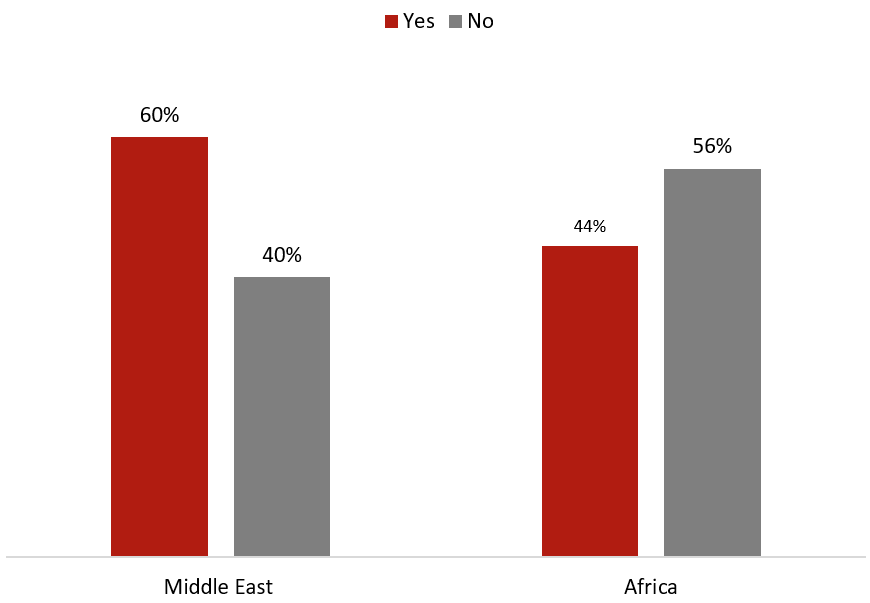 A survey conducted by HVS has asked the leading operators in the region a set of questions that look at how they see the region develop going forward. Eleven international operators have answered the survey conducted in the month of August. 60% of the respondents see a shift in operating model throughout the Middle East post the COVID-19 crises. HVS observed a trend away from hotel management to franchise agreements over recent years and most of the respondents see the current market situation as an accelerator to this trend.
Figure 27: Renegotiation of Contracts

When asked for the most likely clauses to be renegotiated, most of respondents indicated a review of operator fees followed by clauses around performance tests and termination rights. Yet again, a significant number of respondents see a potential migration from management contracts to franchise agreements as likely. 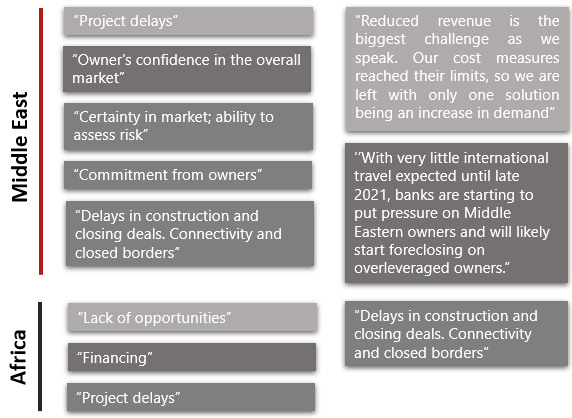 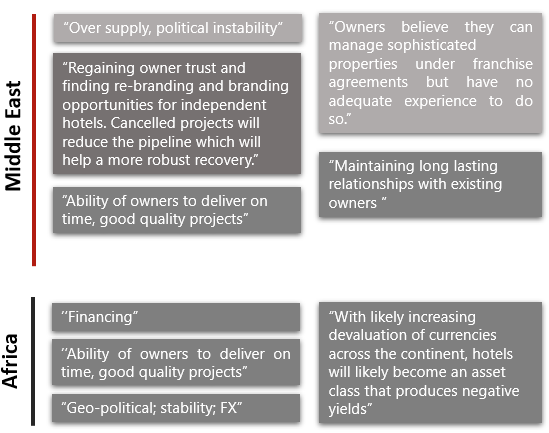 Source: HVS
When asked about challenges in the near, and long-term, respondents were mostly concerned with the uncertainty and inability to plan and forecast. Likewise, project delays and a lack of financing were mentioned frequently.

*All information is available as of 1st September, 2020
Disclaimer
HVS does not provide legal or other regulated advice or guarantee results. The publication findings reflect general insight based on information available at a certain date on a selected sample size. These findings should be viewed as indicative only and not relied upon for future course of action. These findings may be subject to change and therefore HVS has no obligation to update these findings and makes no representation or warranty and expressly disclaims any liability with respect thereto.

Irmak Sen is a research analyst working with HVS Middle East & Africa. Irmak is bilingual in Turkish and English and obtained her Bachelor of Science degree in International Hospitality Management from Ecole Hôtelière de Lausanne with concentrations on Hotel Development and investments. Prior to joining HVS, Irmak has held various operational and administrative internship positions in hotels and hospitality related sectors across Europe, Asia and Middle East. Since joining HVS, Irmak has been supporting the team with research for projects and publications.

While the hospitality industry is going through one of the roughest years of recent history, it is crucial that strategic decisions are taken considering all aspects of an owner – operator partnership. This guide features 100 operators in over 47 countries and territories in the Middle East & Africa, and aims to guide owners in understanding the scale, presence and capabilities of operators in this region. %%ViewCount%% Views Comments
Share:
Subscribe To Newsletter