Amazon in Music City: The Anticipated Impact on the Lodging Industry

In 2018, Amazon announced the locations for its coveted HQ2. Along with this announcement, the company also disclosed a new Center for Operational Excellence to be built in Downtown Nashville, bringing with it 5,000 new high-paying jobs. But how will this impact the local lodging industry, especially amid a massive number of new hotels flooding the market? 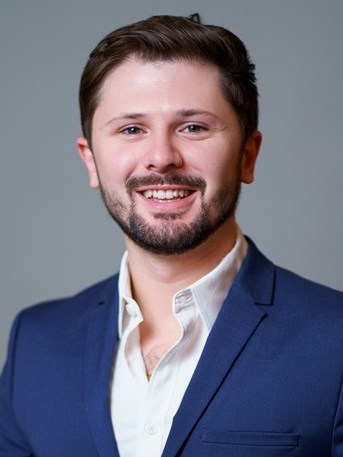 Following a nearly year-and-a-half Request for Proposal (RFP) process, Amazon announced that it would split the location of its new HQ2 campus between Long Island City, New York, and Crystal City, Virginia. The company also unexpectedly announced an additional, smaller office called the Center for Operational Excellence in Nashville, Tennessee. Following intense pushback from residents and local politicians in NYC, Amazon withdrew from Long Island City, which left just Crystal City in Virginia as the company’s new HQ2 location. Among the many anticipated benefits of the new HQ2 and the Center of Operational Excellence is the potential for a significant influx of lodging demand, comprising both transient and group travelers. The intent of this article is to provide an understanding of the potential effect on the lodging industry in Nashville. HVS also examined the potential effect on the Northern Virginia market.

Amazon already has a major footprint in Metro Nashville, operating four distribution facilities in Murfreesboro, Lebanon, Madison, and adjacent to the airport, totaling over three million square feet. In 2019, speculation about the possible tenant of a large industrial project, known as “Project Sam,” in Mt. Juliet began swirling. Encompassing 75 acres, the planned 3.6-million-square-foot facility will also include 80,000 square feet of office space. Amazon was naturally at the top of everyone’s mind as a possible tenant given its highly publicized new downtown presence. Based on Wilson County records, Amazon appears to have purchased the land in November 2019, thus confirming speculation. If current plans move forward, it will nearly double Amazon’s Greater Nashville distribution footprint to roughly 6.5 million square feet.

The company’s new Downtown Nashville Center for Operational Excellence will be the anchor tenant of a $1-billion, 15-acre, mixed-use development known as Nashville Yards. The development site is positioned between Church Street and Broadway in Downtown Nashville—one of the most popular areas in city. Other significant components of the development will include a 4,500-seat Anschutz Entertainment Group-managed event venue, a 591-room Grand Hyatt hotel, a 315-room MGM Grand hotel, 400,000 square feet of retail space, over 1,000 residential units, and a greenway park adjacent to the CSX tracks.
The following illustrations depict the planned Nashville Yards Project. 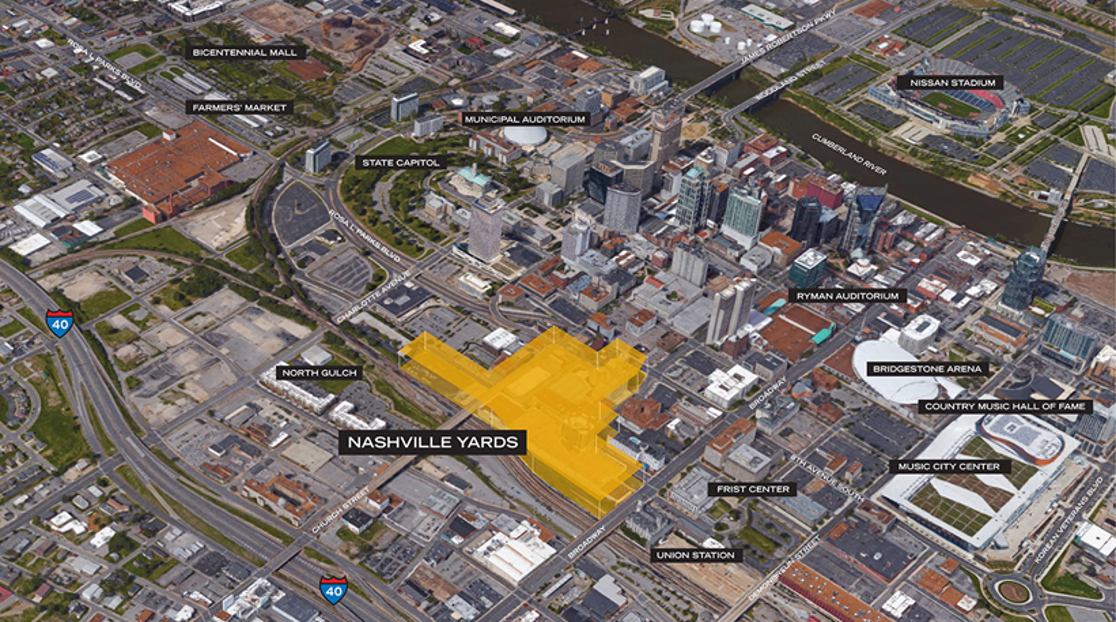 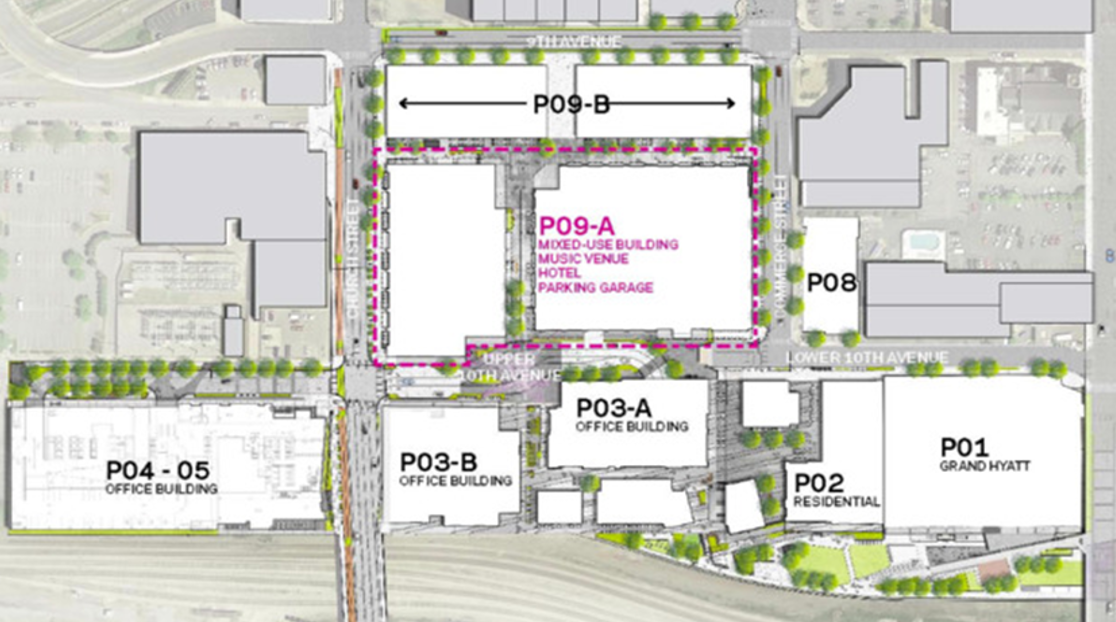 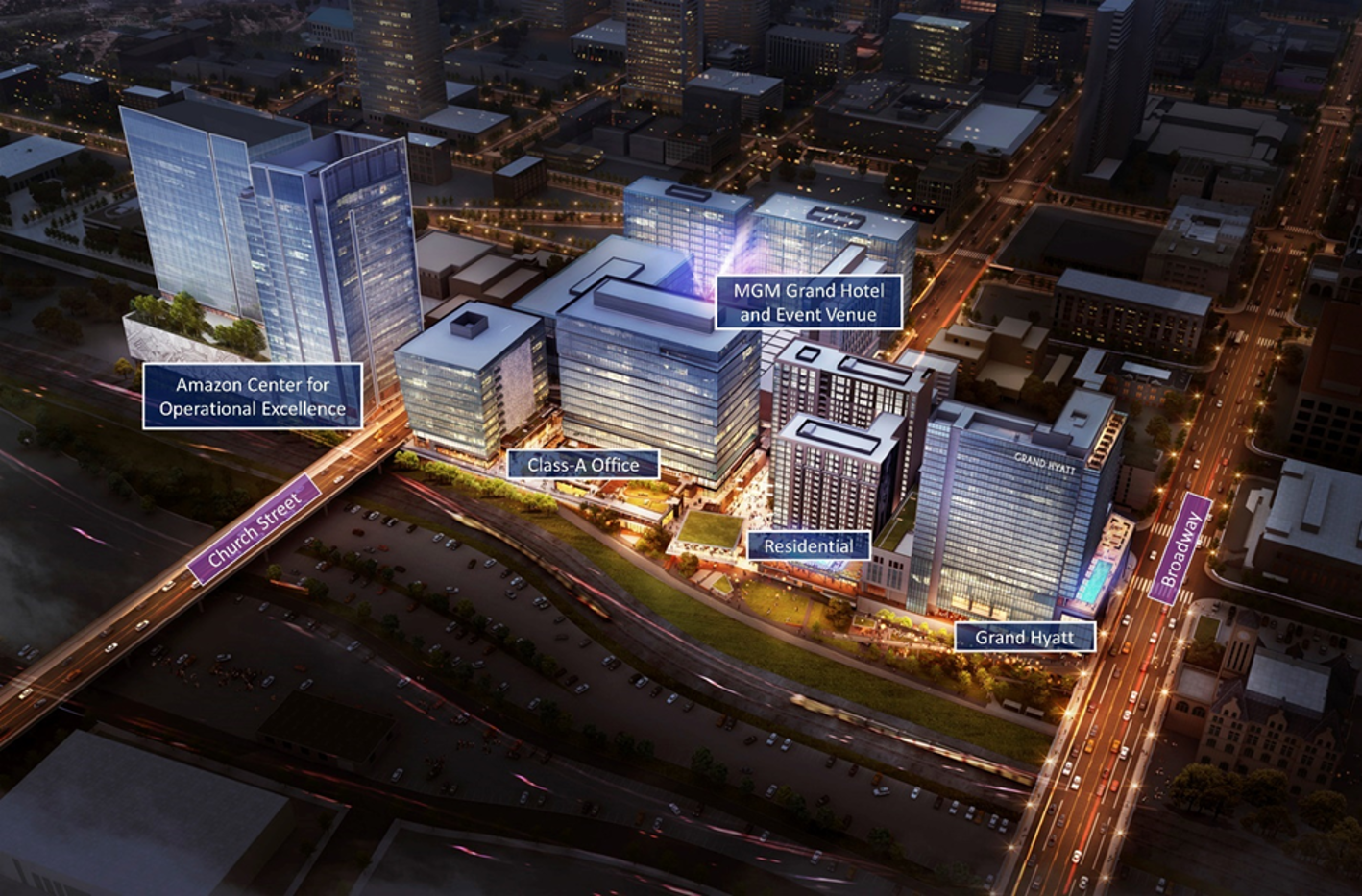 Project Timeline
Amazon has promised 5,000 new jobs at the new facility, with a reported average annual salary of $150,000. Although a final timeline has yet to be announced by Amazon, construction on Phase I of the Center for Operational Excellence is expected to be completed mid-year 2021. Based on the data currently available to the public, we have compiled an estimated job-growth timeline, as follows:
Amazon Annual & Incremental Employment Projection 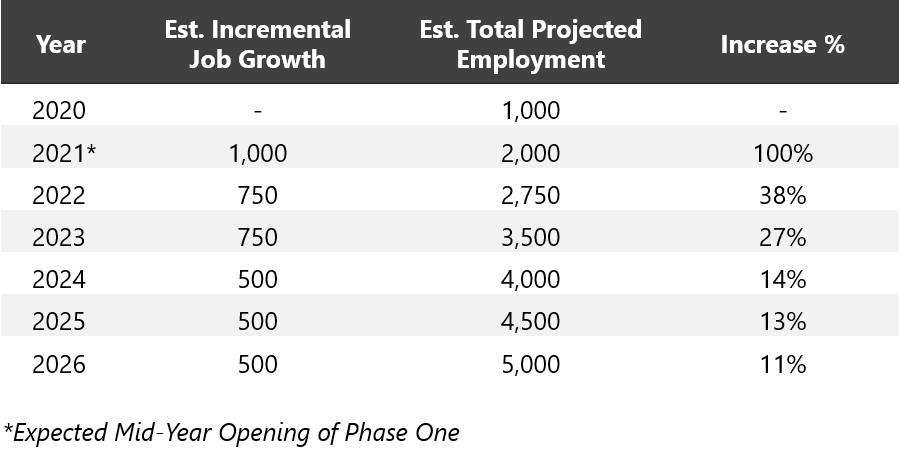 A two-part, $101-million incentive package was offered to Amazon from both the State of Tennessee and the City of Nashville. The State awarded Amazon a $65-million capital grant that can be used for land acquisition and construction, as well as a $21.7-million job tax credit. The City approved its standard job grant, which awards $500 per employee over the course of seven years; this package has been estimated at $15 million. 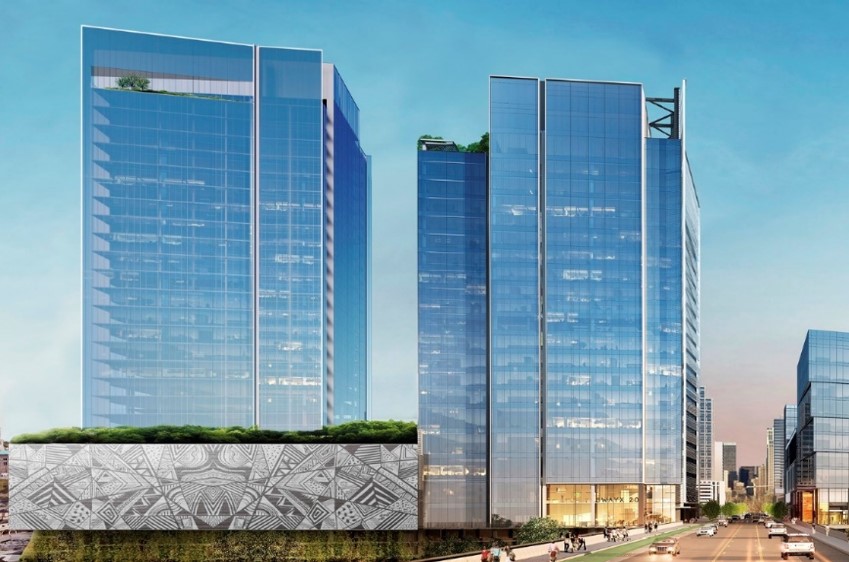 Amazon’s Nashville announcement is the largest jobs’ commitment made by a company in Tennessee state history. However, this investment comes following a decade of unprecedented growth for the city. According to the U.S. Bureau of Labor Statistics, over 291,000 non-farm jobs were added in the Nashville metropolitan area between 2009 and November 2019; between 2017 and 2018 alone, 29,800 jobs were added. This growth has become more glaring to locals as more people move to Nashville, at over 100 people daily at its peak in 2016, according the U.S. Census Bureau.

Although Amazon’s 5,000 new jobs are a win for Nashville, it still makes up only a small percentage of the roughly 403,000 Nashville residents who are currently employed. Furthermore, companies such as AllianceBernstein, EY, SmileDirectClub, and Philips have all announced plans to bring major offices or headquarters to Downtown Nashville, collectively adding another 4,300 expected jobs. The addition of Amazon will continue to spur growth in the market; however, much of the significance will be found in the indirect impact, including potential job growth from ancillary industries and infrastructure advancements. Areas with some of the highest potential to be affected are the burgeoning North Gulch neighborhood and parts of North Nashville.

Seattle – A Model for Potential Impact
The new Center for Operational Excellence is expected to be modeled upon, albeit on a smaller scale, by the scope and design of Amazon’s existing headquarters in Seattle, Washington. Thus, Amazon’s impact on Seattle, and particularly the lodging market, has been analyzed to help estimate the future impact on Nashville’s lodging market.

Furthermore, Amazon released the following economic impact statistics regarding its Seattle operations during its RFP process, as shown below.

These data illustrate that Amazon’s growth in the market has been rapid in recent years, with the addition of 18,000 positions between 2015 and 2018. We have compiled these employment statistics alongside the room-night-generation data in the table below.
Annual Employment and Generated Room Nights – Downtown Seattle

Amazon’s presence in Downtown Seattle has positively affected the corporate landscape of the market, with tech companies such as Google, Facebook, and Uber capitalizing on the new depth of tech talent in the market to establish satellite operations. Seattle’s relative proximity to these companies’ main hubs in Silicon Valley, as well as Microsoft’s significant presence in the market, has also contributed to this trend.

Local market participants also credit Amazon with enhancing Seattle’s profile as an attractive leisure destination. As the city has evolved to accommodate tech-forward innovations, a growing population of Millennials, and demand for more upscale accommodations and amenities, the company has helped add an “it factor” that, while difficult to quantify, has undoubtedly changed U.S. travelers’ perception of the market. Arguably more impactful, Amazon’s global presence has placed Seattle as a destination marker for the rest of the world, as well.

Based on the information published by Amazon, we have estimated the total impact on room nights in the Seattle market through the application of an indirect impact multiplier. Our estimate is illustrated in the following tables.

Based on this analysis, we have estimated that Amazon generated nearly 750,000 total room nights for Seattle in 2017. To quantify the impact that Amazon’s presence will have on Nashville and, more specifically, to estimate the number of room nights that Amazon’s new Center for Operational Excellence will induce in the market, we have derived a ratio of room nights to employees and an indirect impact multiplier.

In applying these metrics to the local market, we have also qualitatively considered the following factors:
Nashville, Tennessee
We have estimated the number of induced room nights in Downtown Nashville by the Center for Operational Excellence, as follows:
Induced-Room-Night Estimate

The following table illustrates the net lodging room nights expected to be induced by the expansion of Amazon into Nashville.

Taking into consideration the room nights that the suburban markets will attract, it is estimated that between 57,000 and 59,000 room nights will be added to current Nashville demand levels during the next seven years. We have also estimated a nominal amount of room nights to be captured by suburban markets in the form of compression demand. During peak events and demand periods, we anticipate some demand will be forced out of the downtown market, particularly certain groups and guests that are more price sensitive. We have presented this estimate in a range given that there will be periods of ramp-up and de-escalation as Amazon becomes established, development continues, and the neighborhood ultimately stabilizes.

Supply, Supply, Supply!
Nashville has experienced unprecedented growth in hotel demand in the past ten years. With that, hotels have been popping up all over town, but the most concentrated areas of development are within two miles of Broadway, Nashville’s hottest tourist destination. The number of hotel rooms in this area has nearly doubled since 2010, with thousands of more rooms in the pipeline expected to enter the market over the next four years.

The following graph depicts the number of new hotel rooms that have opened in the past six years within two miles of Downtown Nashville. 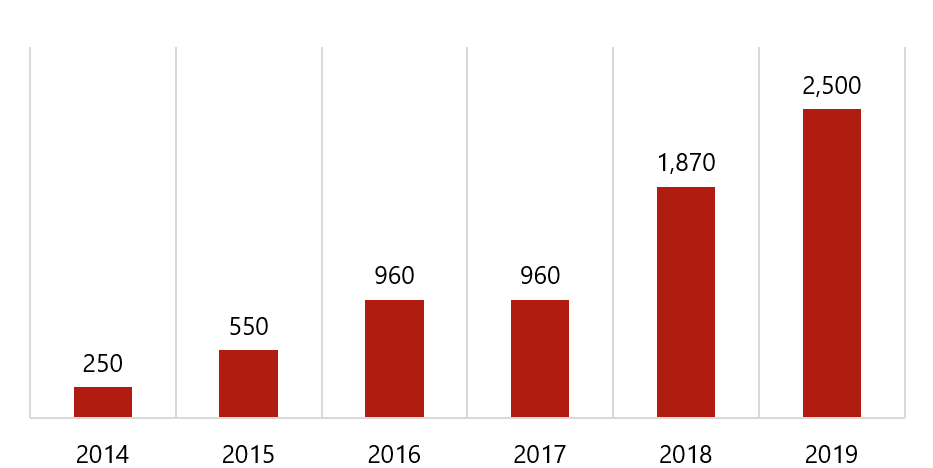 The following chart illustrates the current hotel supply by class. 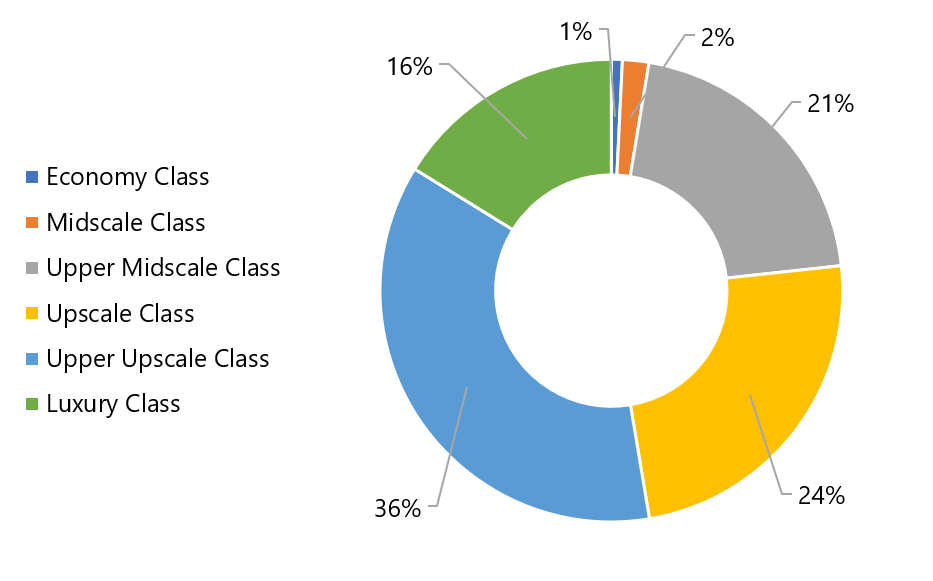 Following the opening of Music City Center in 2013, demand began increasing annually by double-digit numbers, and the Nashville lodging market emerged as one of the strongest and fastest growing in the United States, realizing compounded annual RevPAR growth of 10% between 2010 and 2018. A report by CheapHotels.org notes that Nashville has the highest average hotel rates out of any U.S. city, beating out markets like New York and San Francisco. Combined with growth in tourism, the surge in demand quickly caused an undersupply in quality hotel rooms in the market, which became a stimulant for new hotel development.

New supply has begun to negatively impact RevPAR in the most recent historical period, although the market has absorbed the supply relatively well considering nearly 7,100 new hotel rooms have opened near Downtown Nashville in the past six years (4,300 of which were in 2018 and 2019 alone). The luxury segment is anticipated to grow substantially in the near future, as hotels like The Joseph, Grand Hyatt, Four Seasons Hotel & Private Residences, 1Hotel, W Hotel, and an EDITION are all currently under varying stages of development and expected to be open within the next four years. Roughly 3,500 of the incoming rooms supply have a definitive project timeline and tentative opening date. Around 3,400 new rooms are in various planning stages. We have estimated approximately 80% of these projects will be completed in the next five years and have included them in our supply growth projections, coupled with information from STR and other sources.

It’s no secret that the Nashville economy is thriving. Investors from around the country and world are looking to put down roots in Music City. Visitor numbers in the city have increased substantially in recent years, in part due to the city’s notoriety following the premier of the primetime television show Nashville. The city has been able to attract major events, such as the 2019 NFL Draft, which attracted more than 600,000 people, as it emerges as a prosperous, modern American city. Amazon clearly took note of the potential and growth of the city. Not only will the new Amazon Center for Operational Excellence contribute directly to lodging demand, but the new complex will inevitably be another catalyst for the revival of surrounding neighborhoods. Nashville has changed tremendously over the past decade, but there are still many areas surrounding Downtown that could benefit from Amazon’s investment. The diverse economy, stemming from the strong tourism industry and huge commercial investment in healthcare, finance, and logistics, positions Nashville to realize continued growth over the next five to ten years.

Marc is a Vice President with the HVS Nashville Consulting & Valuation office and graduated in December 2018 from Michigan State University. He holds a Bachelor of Arts in Hospitality Business with a minor in Real Estate Investment. Before joining HVS in February 2019, Marc held internships with Bedrock Detroit and White Lodging Management. Contact Marc at +1 (615) 426-8806 direct or [email protected].

In 2018, Amazon announced the locations for its coveted HQ2. Along with this announcement, the company also disclosed a new Center for Operational Excellence to be built in Downtown Nashville, bringing with it 5,000 new high-paying jobs. But how will this impact the local lodging industry, especially amid a massive number of new hotels flooding the market? %%ViewCount%% Views 1 Comments
Share:
Subscribe To Newsletter