HVS Monday Musings: The Hand of God in the Post-Pandemic Revival of Indian Tourism

Religious tourism, which contributes significantly to domestic tourism in India, has demonstrated resilience and recovered faster than most other segments following the pandemic. Read on to know more. 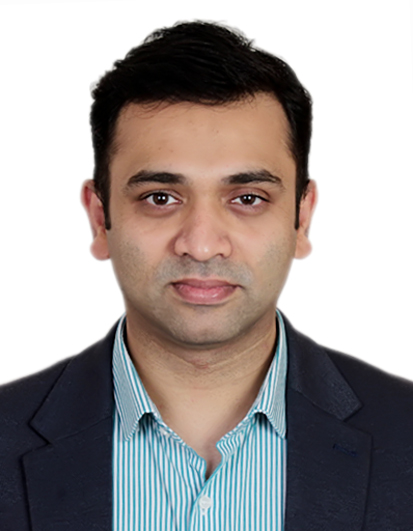 Religious or faith-based tourism to holy sites or places of worship is one of the oldest forms of travel. As per the UNWTO, 300-400 million tourists traveled for religious purposes every year globally before the pandemic. Religious tourism has been a significant contributor to the tourism industry in India, the land of diverse religious beliefs and practices. 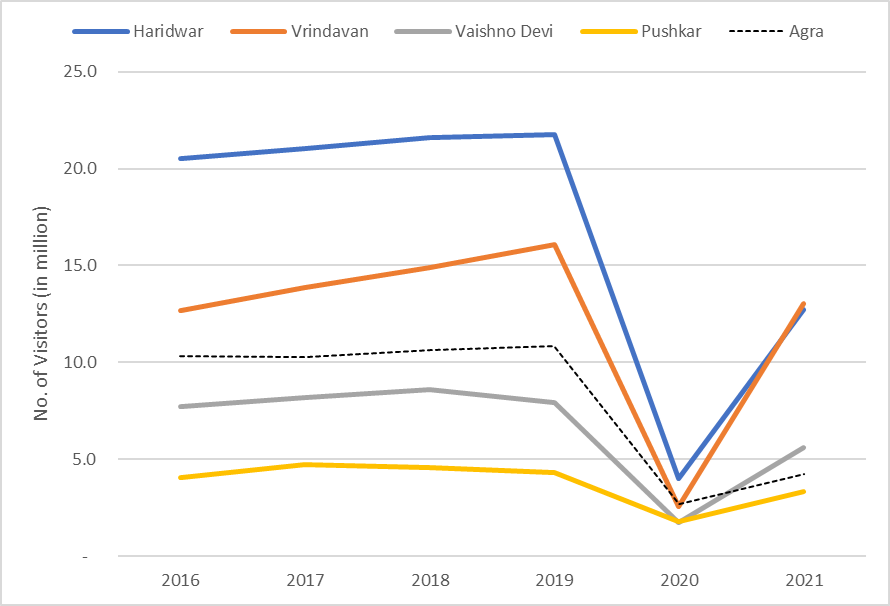 The following factors have driven the growth of religious tourism in India in recent years:

Increased focus by the Government on developing religious sites
Both Central and State Governments in India have devised several schemes to boost religious tourism. The Central Government, for instance, has launched the National Mission on Pilgrimage Rejuvenation and Spiritual, Heritage Augmentation Drive aptly abbreviated as PRASHAD, for the holistic development of identified pilgrimage destinations as developing religious sites requires a different focus compared to other tourist destinations. Apart from providing modern amenities, it is also important to observe how a religious tourist interacts and seeks new experiences at religious destinations. The PRASHAD Scheme identified several challenges – the lack of infrastructure like budget hotels, roads, last mile connectivity, sewage, hygiene and cleanliness, solid waste management, lack of awareness, and developing a code of etiquette to be observed by religious tourists. Among other things, the scheme set guidelines for developing world-class infrastructure in an integrated manner with the collaboration of State Governments, the private sector, and other stakeholders.

Number of Destinations/Sites Identified Under the PRASHAD Scheme 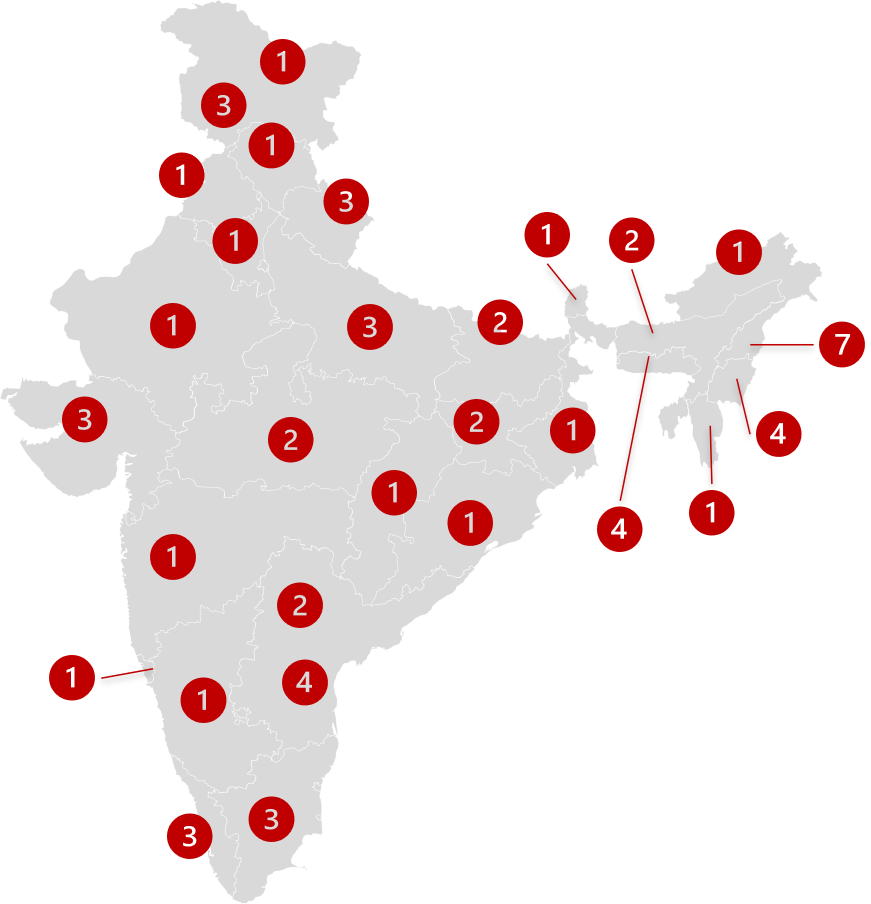 Source: Ministry of Tourism, India
As per the report, India Tourism Statistics 2021 published by the Ministry of Tourism, 61 destinations/sites across 29 states/union territories have been identified for development under this scheme. An amount of INR 1,210 crores (or INR 12.1 billion) has been sanctioned for 37 projects in 24 states since the inception of the scheme till 31st December 2021.

The State Governments have also undertaken several initiatives to capitalize on the travel demand at religious sites in the state and boost tourism. For instance, the Uttar Pradesh Government has plans to develop a 177 km long Ram Van Gaman Marg which will link places where Lord Ram spent time during his 14-year exile from Ayodhya. Similarly, another route called the Ram Janaki route will be widened to a 4-lane road from Ayodhya to Janakpur in Nepal. These developments along with the under-construction Ram Temple are expected to make Ayodhya a significant religious tourism hub in the future. Other important religious projects include the development of the ‘84 kos parikrama routes’ in Mathura – Vrindavan. ISKCON is also reportedly building a Sri Krishna Temple in Vrindavan, which when completed will be the tallest religious monument in the world. Given ISKCON's global following, this project has the potential to increase Vrindavan's global visibility as a religious tourist destination.

Development of infrastructure across the country
Over the past few years, the Central Government has made infrastructure development a top priority. The government’s growing investments in improving the nation’s road and rail networks and fostering last-mile connectivity to tourist destinations have been important factors in the segment’s growth.

For instance, the Indian Railways is constructing the 327 km long Char Dham Project to connect the four major pilgrimages in Uttarakhand – Kedarnath, Badrinath, Gangotri and Yamunotri. The international airport at Kushinagar, the Buddhist tourism circuit’s core, would allow tourists easy and direct access to the Buddhist sites in the region. The construction of an international airport at Ayodhya is also currently underway and is expected to be operational by December 2023. Similarly, at the beginning of 2022, the Central Government announced several road projects that will provide easy and safe transport for pilgrims and tourists to the temple town of Ujjain in Madhya Pradesh. Similar infrastructure projects are underway or being planned to improve last-mile connectivity to other religious destinations.

Impact of the Pandemic
The COVID-related travel restrictions and closures had a significant impact on religious tourism, just as they did on all other tourism segments. Due to the pandemic’s impact, temple towns throughout India witnessed a significant decrease in visitor traffic. However, religious tourism is less vulnerable to economic downturns and has recovered quickly as restrictions have been eased.

A recent survey conducted by Thomas Cook India-SOTC found that 55% of the respondents took a religious/spiritual tour or trip as soon as they could. This growth in demand can be attributed to a reactionary response of people who have lived through one of the most traumatic events in recent human history. People longing to express their gratitude and seeking solace in spirituality have been thronging popular religious and spiritual destinations around the country since the travel restrictions have been eased. As per recent media reports, the number of people visiting popular religious sites has more than doubled post the pandemic. For instance, the Vaishno Devi temple is receiving 32,000 to 40,000 pilgrims each day, up from 10,000 to 15,000 during the same period prior to the pandemic. Meanwhile, at least one lakh people visit the Golden Temple in Amritsar daily, which is much higher than in the pre-pandemic period. A similar phenomenon has been seen in the south at the Guruvayur Temple in Kerala, where daily visitors range from 6,000 to 7,000, compared to the pre-pandemic tally of 4,000.

Challenges and Opportunities for Hotels
A large section of religious tourists is midscale or economy travelers. Most of the accommodation demand at these destinations is met by dharmshalas or guest houses managed by the temple trusts or by local unbranded standalone hotels. The graph below provides a breakup of the branded and unbranded keys in some of the religious destinations in the country:
Hotel Keys at Key Religious Destinations (as of 31st December 2021) 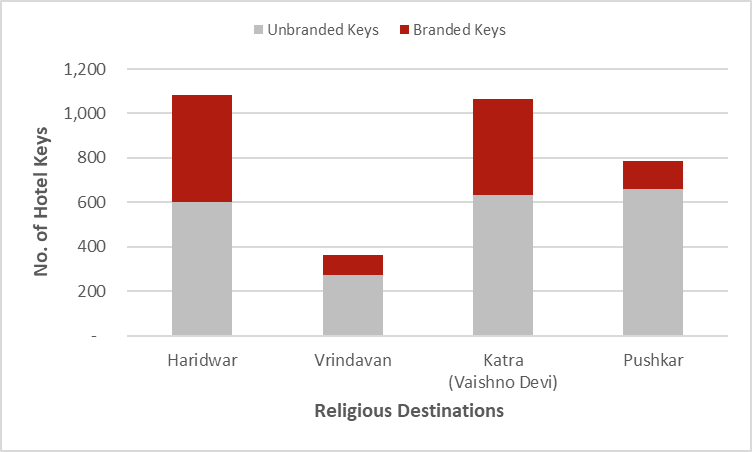 Usually, pilgrim locations do not attract visitors for more than one night. This makes it imperative to plan leisure infrastructure in the hotels at these locations for them to become popular family vacation destinations. Rishikesh is an ideal example of a religious destination that has become popular for several other activities like adventure sports and wellness. In some locations, there is a scope for luxury players to innovate and provide various other leisure activities to allow travelers to combine their religious activities with leisurely holidays. Hotel chains are leveraging this and have been developing luxury hotels in and around Rishikesh. Developing hotels at these destinations come with a set of challenges like restrictions on serving non-vegetarian food and alcohol. However, it also provides opportunities to develop large banquet spaces as visitors might want to host religious events like weddings at these holy destinations.

The religious tourism market is currently dominated by domestic tourists. However, effective marketing campaigns can increase foreign tourists’ knowledge of these locations, which when combined with improved infrastructure can help put some of the Indian religious places on par with international religious destinations like Vatican City or Mecca, supporting the segment’s future growth.

Abhishek Rajadhyaksha is a Senior Consultant in the Consulting & Valuation team, based out of the HVS Office in Mumbai. He is an alumnus of Les Roches International School of Hotel Management in Switzerland from where he pursued his Master of Business Administration in Hospitality – Finance.

With over 9 years of experience in hotel financial operations, market assessment and feasibility studies in the hospitality sector, Abhishek has worked with leading organizations like Four Seasons and hospitality consulting firm Mahajan & Aibara Advisers LLP.

Religious tourism, which contributes significantly to domestic tourism in India, has demonstrated resilience and recovered faster than most other segments following the pandemic. Read on to know more. %%ViewCount%% Views Comments
Share:
Subscribe To Newsletter