The Raleigh market achieved historically high levels of economic activity and visitation in 2019. However, after the onset of the COVID-19 pandemic in early 2020, the market suffered significant declines in business activity and hotel demand, similar to most metropolitan areas across the country. How did Raleigh sustain through the height of the pandemic? What is the market experiencing as it emerges from the pandemic, and what does the future look like for this state capital?

Prior to the onset of the COVID-19 pandemic, Raleigh was growing rapidly given its high quality of life and status as the state capital of North Carolina. The city has attracted large national and multinational corporations, such as Duke Energy, Citrix, Red Hat, Amazon, IBM, Accenture, and PNC. Downtown Raleigh experienced tremendous growth in recent years, with approximately $1.3 billion in developments from 2015 to 2020. The area has also historically been known for its major academic and healthcare institutions, including Duke University, the University of North Carolina at Chapel Hill, North Carolina State University, Duke University Health System, UNC REX Healthcare, and WakeMed Health & Hospitals. Tourism was at its peak within Wake County in 2019, with tourism tax collections setting a new record, and both hotel occupancy and average daily rate (ADR) registering growth.

Impact of the Pandemic

Similar to other large cities throughout the Southeast and the nation, business and leisure travel came to a halt at the onset of the COVID-19 pandemic. Meeting and group demand dried up as well, particularly with the temporary closure of the Raleigh Convention Center in March 2020. According to data provided by Loren Gold, Executive Vice President of Visit Raleigh, 385 convention center events were lost or canceled in 2020, resulting in an economic-impact loss of $204 million from the anticipated 536,000 attendees and over 335,000 room nights for the city’s hotels. While this represented a significant loss to the city, about 15% of the previously booked events were rescheduled. Approximately $42.6 million in economic impact was shifted with the rescheduling of these 64 events, including more than 78,000 room nights from almost 105,000 attendees.

According to Visit Raleigh, the county welcomed almost 13 million visitors in 2020, a 29% decrease from 2019, who spent approximately $1.7 billion during their time in Wake County (43% less than spending in 2019). These metrics declined in 2020 for the first time since the height of the Great Recession in 2009. While most visits were day trips, those who stayed overnight tended to stay longer than normal, and more families were traveling together. With the decreases in visitation and spending came declines in industry employment. Lodging industry employment fell almost 40% in 2020, compared to a decline in total employment of less than 5%. [1]

Furthermore, many of the major Downtown Raleigh employers closed their offices in 2020 and moved to a remote work environment. This lack of weekday activity resulted in the loss of corporate demand for local hotels, particularly in the Central Business District. Downtown restaurants and retailers were significantly affected by the absence of corporate activity, and many suspended operations or closed in 2020. As of mid-year 2021, transient demand remains well below historic levels, as many businesses have not reopened their downtown offices. Most of these employers, including Red Hat and Citrix, have announced plans to return their staff to the office by September 2021 at the latest.

Wake County has historically enjoyed annual occupancy levels five to ten points higher than average for the state as a whole, with the county’s ADR on par with the state average; however, local occupancy was below the state average in 2020, and ADR was roughly $5 lower. Given the Triangle area’s dependence on commercial and group demand, this region felt the impact of the pandemic more greatly than many of the state’s other regions that rely more on tourism and leisure travel. Many markets in western and eastern North Carolina maintained business or even flourished in the second half of 2020, as state residents and visitors sought to spend time in the mountains or beaches, with less need for social distancing and other COVID-19-related restrictions in place at the time.
Wake County and State Hotel Trends 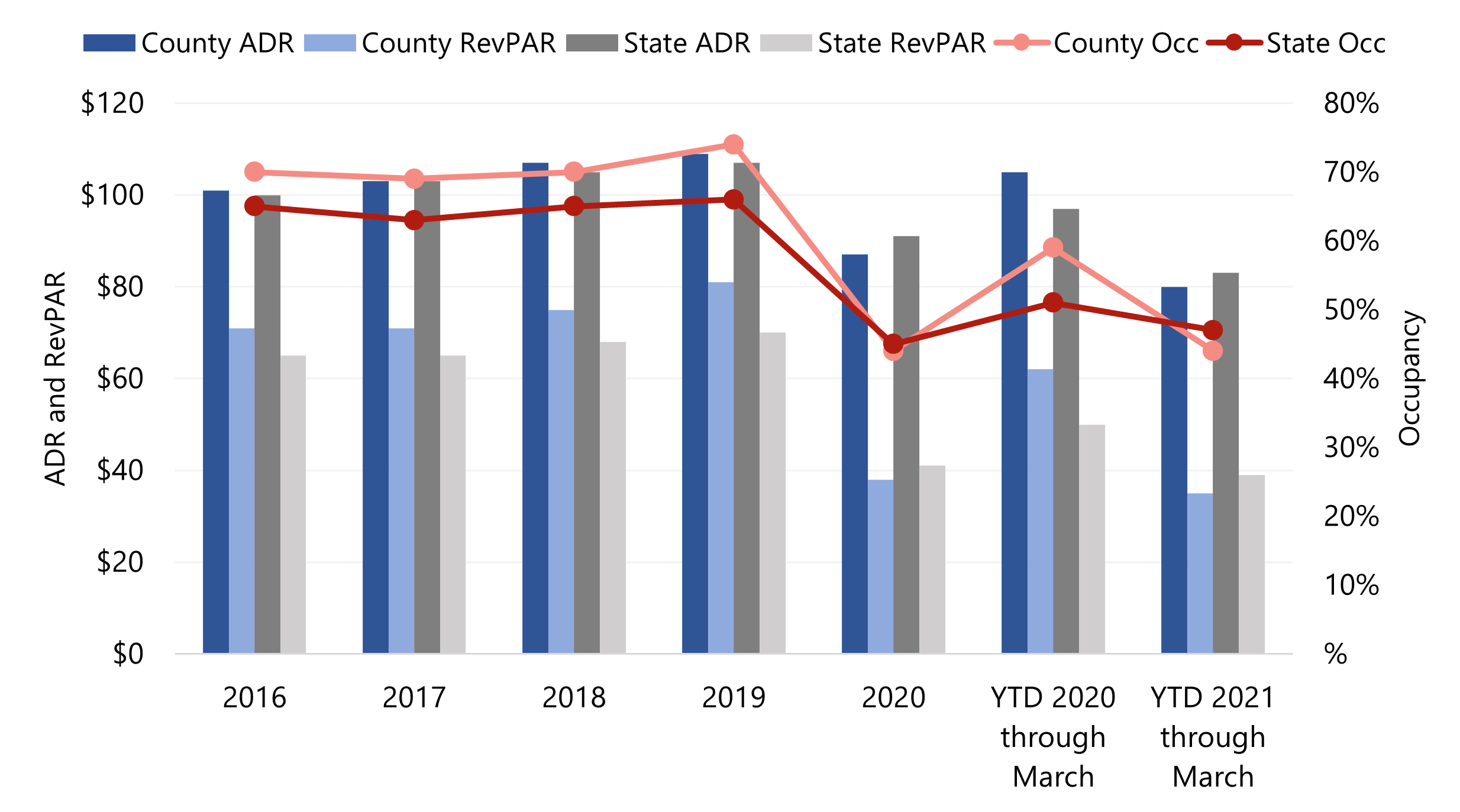 Hotel occupancy remained low through the first quarter of 2021, although local officials note that leisure travel to the area has begun to increase. Weekday transient business demand is still muted, but according to local officials, it is expected to recover as vaccine distribution continues, corporate employees return to the office, and confidence in air travel rebounds. Meeting and group demand will continue to lag, similar to other large metropolitan areas. However, the convention center has reopened, and numerous future large events and groups have been announced; bookings include 55 groups representing more than 56,000 room nights, totaling an expected direct economic impact of almost $30 million. One major event is the first live esports event of the year, co-hosted by Carolina Games Summit and the XP League, which will be quadruple the size of the event held in 2020. Other annual events are returning to the convention center and downtown area, such as GalaxyCon, IBMA World of Bluegrass, and Hopscotch Music Festival.

Sporting events are currently leading the way for economic recovery in Raleigh. The visitRaleigh.com Showcase Series youth soccer tournament was held in November and December of 2020. It was the largest annual youth sporting event ever held in the greater Triangle area, bringing in more than 16,000 athletes and 1,000 teams from across 26 states for over four weekends of play. Several other soccer events have been held already in 2021, including the NCAA Division I Men’s and Women’s Soccer Championships, and the Showcase Series will return again at the end of the year. The inaugural Major League Baseball Draft Combine was also held in the area in June 2021; Cary-based USA Baseball hosted the event at its National Training Complex, generating more than 3,000 room nights for the market.

Following $3 billion in development in Downtown Raleigh that began in 2005, the City of Raleigh implemented a ten-year Downtown Plan in 2015 to address the neighborhood’s future growth. One major project conceived as part of this plan is the potential for a new convention center hotel and a mixed-use tower. The City released a Request for Interest (RFI) in January 2020 to solicit developers to present their vision for this development. While there was great interest in this project, with 13 teams submitting responses, the RFI was terminated at the onset of the pandemic. The City has placed the project on hold and plans to restart the process as the market continues to rebound, likely in 2024/25 or later. The future expansion of the Raleigh Convention Center has also been paused; officially, the expansion has been postponed to 2030 or later, although some officials reported that discussions may resume as early as 2026.

However, other major market expansions are expected to continue. In December 2020, city council members approved the rezoning for Raleigh developer John Kane's proposed Downtown South area, which is planned to include a 20,000-seat Major League Soccer stadium, 1.6 million square feet of office space, 1,200 hotel rooms, 1,750 residential units, and 125,000 square feet of retail and restaurant space. The project is expected to break ground by the end of 2021 and could take between eight and fifteen years to complete; moreover, it could create 5,900 jobs and $20 million in annual property tax revenue, as well as $3.7 million in additional hotel and motel taxes.

Amid the pandemic, several announcements related to economic investment projects were made that should positively affect the market. In April 2020, software communications company Bandwidth announced plans to build a new headquarters in Northwest Raleigh; the company is currently located on the Centennial Campus of North Carolina State University. The $100-million relocation and expansion will create over 1,000 new jobs and is expected to be completed by May 2023. Furthermore, a $5.2-million expansion by Envestnet was announced in March 2020, and a $3.2-million investment by CityPlat was announced in April 2020.

One of the largest and most exciting announcements for the region and the state came in April when Apple announced plans to invest $1 billion in North Carolina, including the construction of a campus and engineering hub in Research Triangle Park that will be Apple’s largest presence on the East Coast. The 281-acre campus will feature a one-million-square-foot building, and the project is expected to create at least 3,000 jobs over the next ten years, with a minimum average annual salary of almost $200,000. As part of this package, Apple will also invest $100 million to support schools and community initiatives in the Triangle area, as well as more than $110 million in infrastructure throughout 80 counties in the state.

Greater Raleigh is well positioned for a healthy recovery once the pandemic is fully suppressed, vaccines are distributed further, and corporate activity resumes. We continue to monitor the various factors influencing the outlook for the Raleigh lodging market, including regular conversations with participants in the region.

For more information on this market, contact Janet Snyder, MAI.

The Raleigh market achieved historically high levels of economic activity and visitation in 2019. However, after the onset of the COVID-19 pandemic in early 2020, the market suffered significant declines in business activity and hotel demand, similar to most metropolitan areas across the country. How did Raleigh sustain through the height of the pandemic? What is the market experiencing as it emerges from the pandemic, and what does the future look like for this state capital? %%ViewCount%% Views Comments
Share:
Subscribe To Newsletter