The Hampton Roads area has historically benefited from strong leisure and tourism demand, government activity at the area’s military facilities, and corporate travel. Since early March 2020, however, the Hampton Roads lodging market has suffered a decline in demand, like most metropolitan areas in the United States, because of the COVID-19 pandemic. How much of an impact has the market experienced, and how quickly can this historically stable market recover?

The Hampton Roads economy has long been supported by the federal government, the military, the aerospace industry, and the transportation and healthcare sectors. Lodging demand is also generated by tourism to the beaches and SMERFE-related transient and group travel. The market dynamics have evolved over the last decade with continued urbanization and growth in the Norfolk and Virginia Beach markets, where hotels consistently outperform those in other towns or submarkets within the MSA.

For the Hampton Roads hotel market, occupancy has historically been lower during the winter months, particularly from December to February. During the spring and summer months, steady commercial and government demand is typically supplemented by an influx of leisure travel, supported by the warmer weather along the coastline, resulting in occupancy registering above 80% at some properties. Prior to the COVID-19 pandemic, market occupancy registered a minor increase in 2019. We note that average rate (ADR) growth tends to be limited given the area’s reliance on military demand, as the government per-diem rates fall below the rack rate otherwise commanded by hotels in the market.

Even though overall occupancy declined in 2020, compared to 2019, occupancy levels in the summer of 2020 were able to surpass 70% in some submarkets, highlighting the strength and continuation of demand amid the pandemic. Moreover, year-to-date March 2021 data illustrate improvement in both occupancy and ADR, compared to the same period of 2020. As a result of the continuation of stable government and military demand, the Hampton Roads hotel market has gained traction to quickly recover from the disruption of the pandemic.
Hampton Roads 2021–2023 Forecast


Major factors contributing to our forecast are summarized as follows:

Hotel transaction activity in Hampton Roads has come to a virtual halt since the onset of the pandemic, with only a handful of transactions to note. The former DoubleTree by Hilton at the Military Circle Shopping Mall, which has been vacant since 2009, was purchased by the Norfolk Economic Development Authority in May 2020 for $2.4 million following the purchase of the adjacent Military Circle Shopping Mall for $11 million. These two sites will serve as part of a larger mixed-use development project for the former shopping center. Several requests for proposals and applications are currently awaiting review, with an anticipated final selection to be made mid-year 2021. The 133-room Motel 6 Virginia Beach was purchased by Baywood Hotels for $2.3 million from Blackstone as part of a three-hotel portfolio purchase in July 2020. Following the hotel’s permanent closure in 2019, the 200-room Governors Inn in Williamsburg was sold in November 2020 for $3.1 million, with plans by the new owner, Castle Development Partners, to demolish it to make way for multi-unit residential buildings. As the economy recovers and hotel performance returns to historical levels, however, more hotel transactions are anticipated to be realized.

Given the initial uncertainty of the economy and the questionable recovery timeline at the onset of the pandemic, limited financing was available for new construction, and some new hotel developments were canceled or placed on hold. Despite a limited pipeline in the past year, the following map shows hotels that have recently opened or are under construction in Hampton Roads. 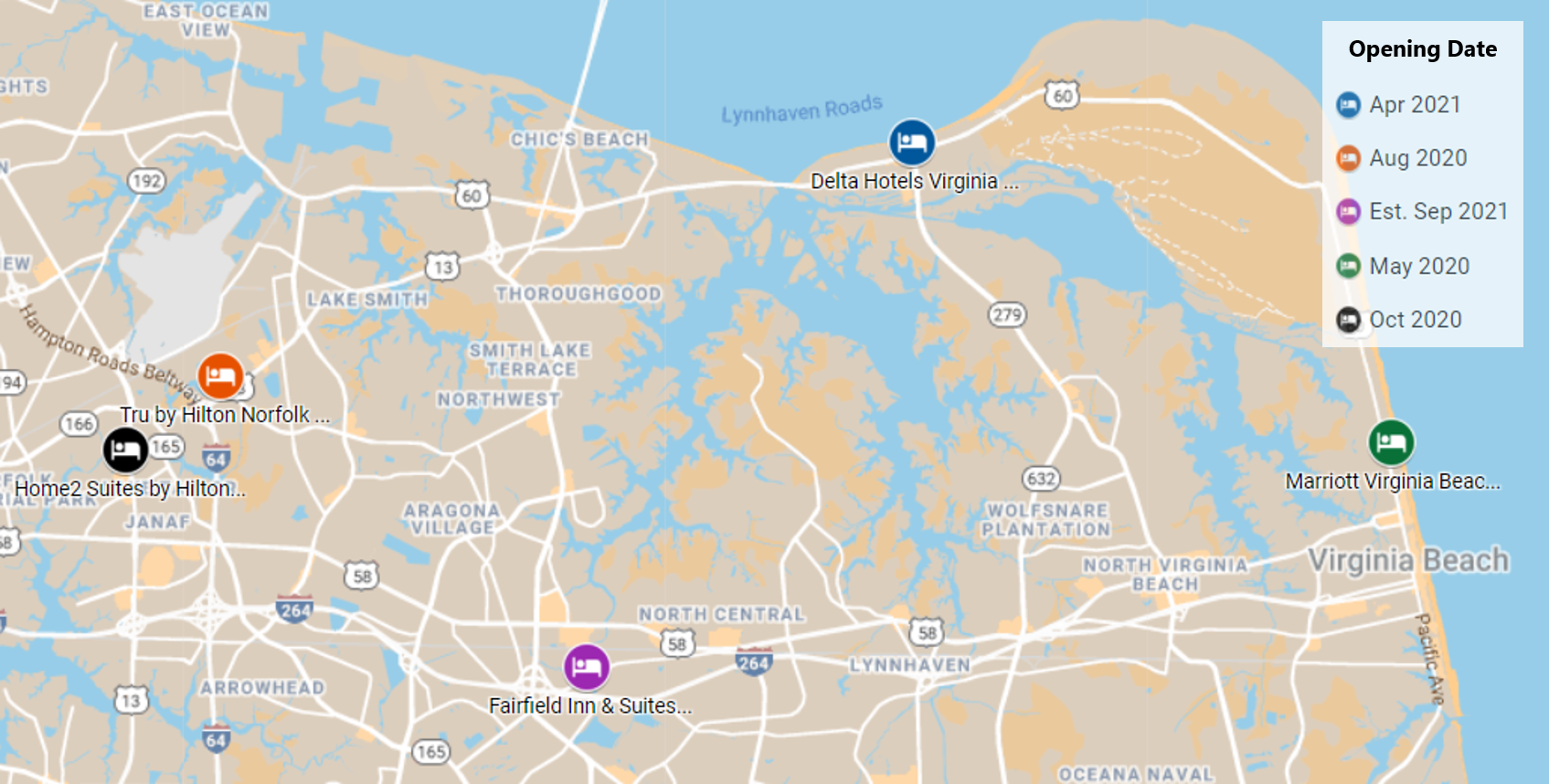 We are confident the Hampton Roads market will rebound upon the broader distribution of the vaccines, the easing of group meeting restrictions, the reopening of the area’s convention centers, and the recovery of corporate and government travel. We continue to watch the factors affecting the Hampton Roads lodging, and our many consulting engagements throughout the region allow us to keep our finger on the pulse of the market.


The most up-to-date information surrounding Virginia’s actions related to COVID-19 can be found at Virginia.gov.

Chelsey Leffet is Managing Director and head of the Northeast region of the U.S. for the Consulting & Valuation division. Chelsey has consulted on hundreds of hotels throughout the Mid-Atlantic, including major Beltway markets. Prior to joining HVS, Chelsey worked in guest services, operations, and restaurant roles at ARAMARK Higher Education; Lighthouse Resort Services in Corolla, North Carolina; the Columbus Inn in Wilmington, Delaware; and the Bellmoor Inn and Spa in Rehoboth Beach, Delaware. Chelsey earned her BS in Hospitality Management and her MBA from East Carolina University. Chelsey resides in Washington, D.C and is a certified general appraiser. Contact Chelsey at (202) 434-8793, or [email protected].

The Hampton Roads area has historically benefited from strong leisure and tourism demand, government activity at the area’s military facilities, and corporate travel. Since early March 2020, however, the Hampton Roads lodging market has suffered a decline in demand, like most metropolitan areas in the United States, because of the COVID-19 pandemic. How much of an impact has the market experienced, and how quickly can this historically stable market recover? %%ViewCount%% Views Comments
Share:
Subscribe To Newsletter