HVS Market Pulse: Green Bay, the Home of the Packers

While Lambeau Field, the home field of the Green Bay Packers, has been around since the 1950s, the area surrounding it has undergone many transformations over the past decade given the success of the NFL team. In this article, we examine the market’s historical trends, the impact of the pandemic, and the outlook for Green Bay. 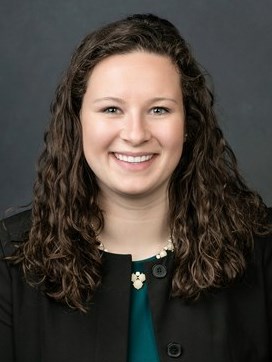 Green Bay, the third-largest city in Wisconsin behind Milwaukee and Madison, is best known for being home to the NFL’s Green Bay Packers and their home stadium, Lambeau Field, and the market’s hotel industry has reaped the benefit of the growth generated from the surrounding Titletown District. However, in 2020, the COVID-19 pandemic caused a significant decline in lodging demand given the restrictions set on sporting events and the limits on gatherings. While the Packers averaged a total attendance of 77,845 per game in the 2019 regular season,[1] fans were prohibited from attending home games during the 2020 season.
Green Bay Packers Average Attendance 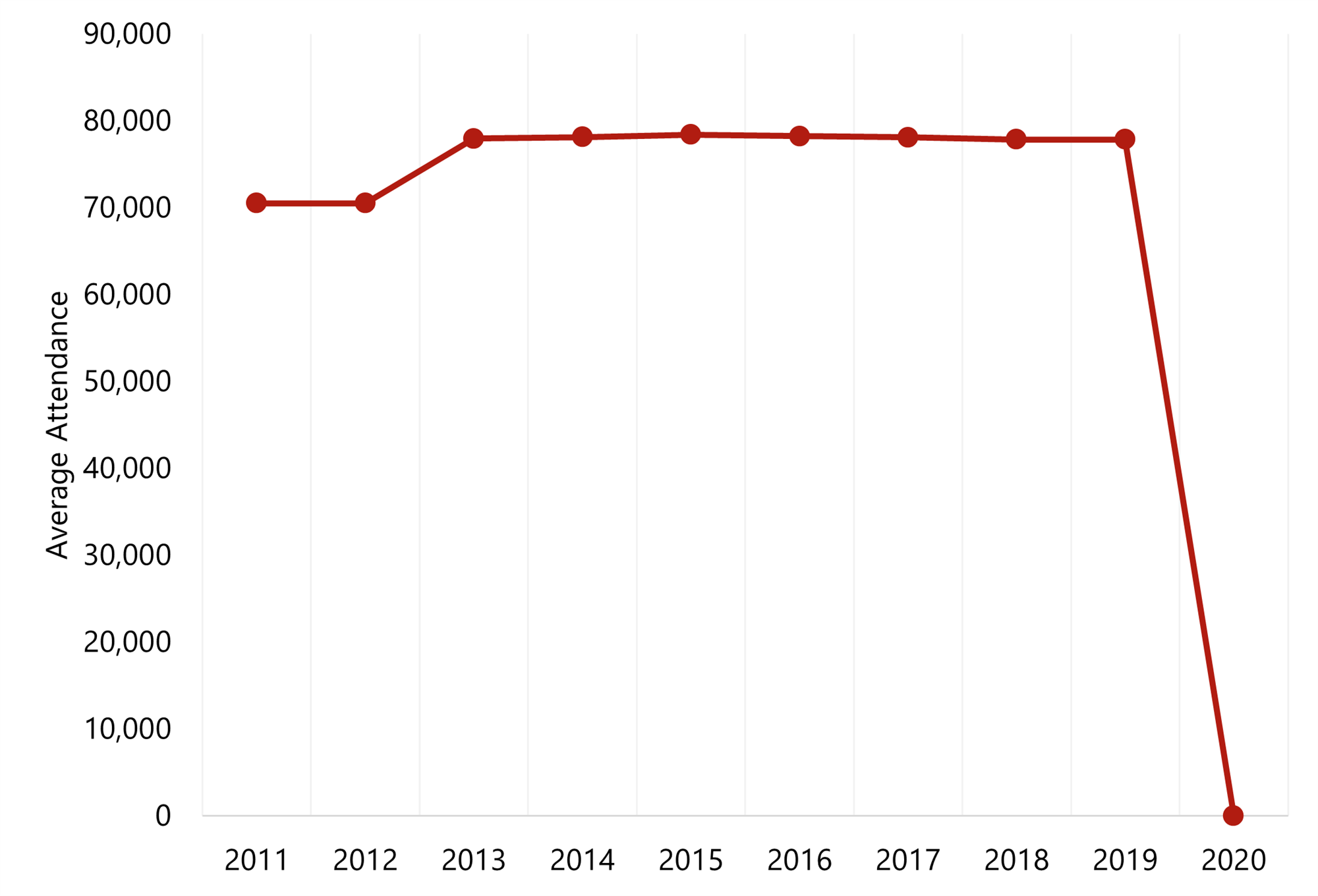 Similar to many markets throughout the United States, the COVID-19 pandemic has led to a notable decline in both occupancy and average rate (ADR), causing several hotels to temporarily suspend operations. The Ascend Collection Hotel Kress Inn, located near St. Norbert College, closed to the public in September to provide student housing for the college. In addition, Lodge Kohler suspended operations from April through early July, at the height of the pandemic. According to STR, occupancy fell from 56% in 2019 to 37% in 2020, reflecting a 19-point drop, and ADR declined from $109 to $79, a 25% decrease.

The greater Green Bay market has experienced an increase in hotel supply over the past five years. As of December 2020, hotel inventory consisted of 49 operating hotels and 4,592 guestrooms, a 12% increase in inventory since 2015. In 2019, two higher-rated properties opened in February. The Delta Hotel Green Bay, formerly the Ramada Plaza by Wyndham, underwent a one-year, $8.5-million renovation. In addition, Hotel Northland, a Marriott Autograph Collection affiliate, underwent a $50-million, nine-year revitalization project to transform the previously vacant historic hotel. Moreover, the extended-stay segment, which was previously underrepresented, has been growing in the market. A Residence Inn by Marriott opened in November 2016, and a Home2 Suites by Hilton opened the following year. The My Place Hotel opened in November 2020, adding to the extended-stay inventory amid the fall peak of pandemic regulations. Looking forward, the Legacy Hotel, a proposed boutique property to be located adjacent to Lambeau Field, is in the early stages of development; it is expected to feature suite-style guestrooms, a restaurant, a rooftop patio, several meeting rooms, a wellness spa, and a fitness center. The Legacy Hotel will join the Lodge Kohler in the luxury segment within the Titletown District.
Recent New Supply in Green Bay 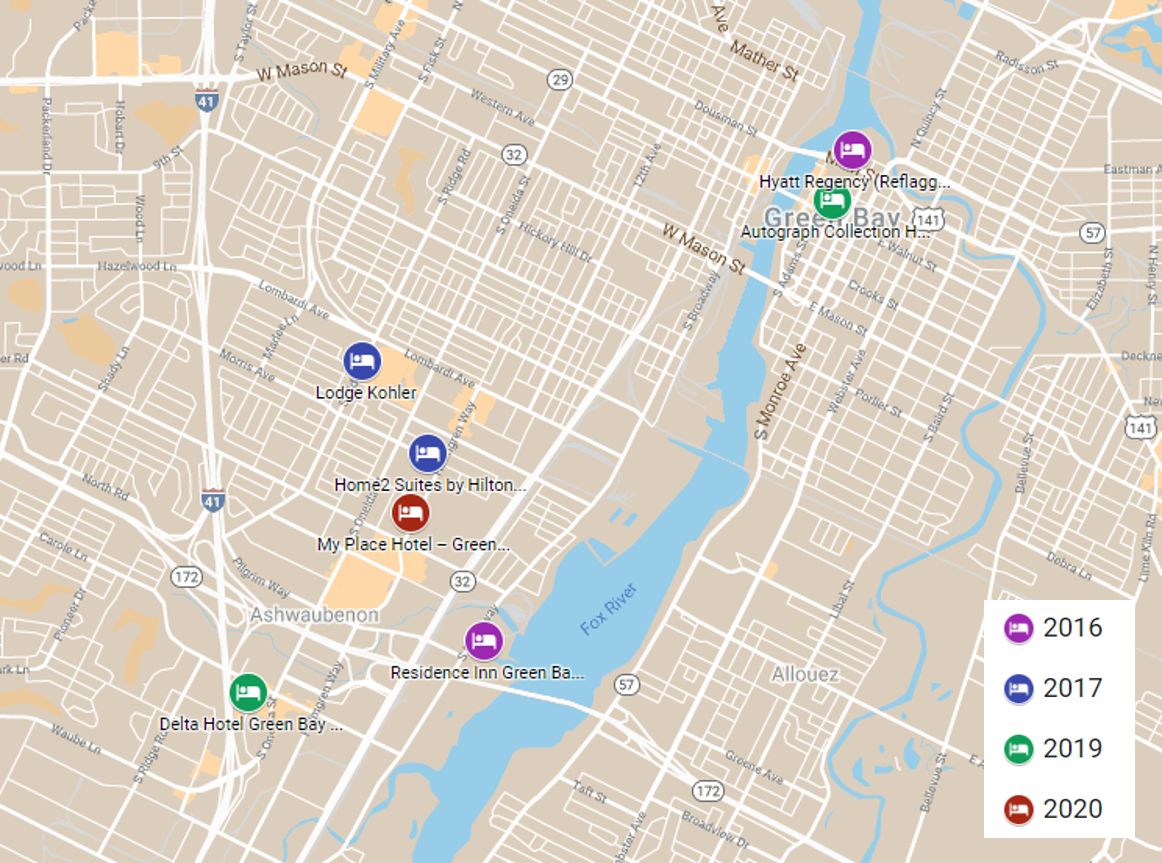 Prior to the pandemic, trends in lodging demand and supply growth were driven by a number of major developments occurring throughout the city. In 2017, the Green Bay Packers completed Phase I of Titletown, a $130-million, 45-acre development that sits west of Lambeau Field. This development includes a ten-acre public park and plaza, a winter skating rink, Ariens Hill (used for tubing), Lodge Kohler, Bellin Health Titletown Sports Medicine & Orthopedics Clinic, Hinterland Restaurant and Brewery, and TitletownTech. It has become a year-round destination for residents and a draw for tourists to enjoy on gamedays while also creating a local shopping and entertainment district. Phase II will include approximately 220 residences, a four- to five-story office building, retail establishments, and additional food and beverage (F&B) and entertainment outlets upon its completion in late 2021. In another part of the city, Green Bay Packaging is building a $500-million paper mill, which is nearing completion for its scheduled opening in the first quarter of 2021; other developments include The Shipyard, The Rail Yard Innovation District, and the Resch Center, to name a few. 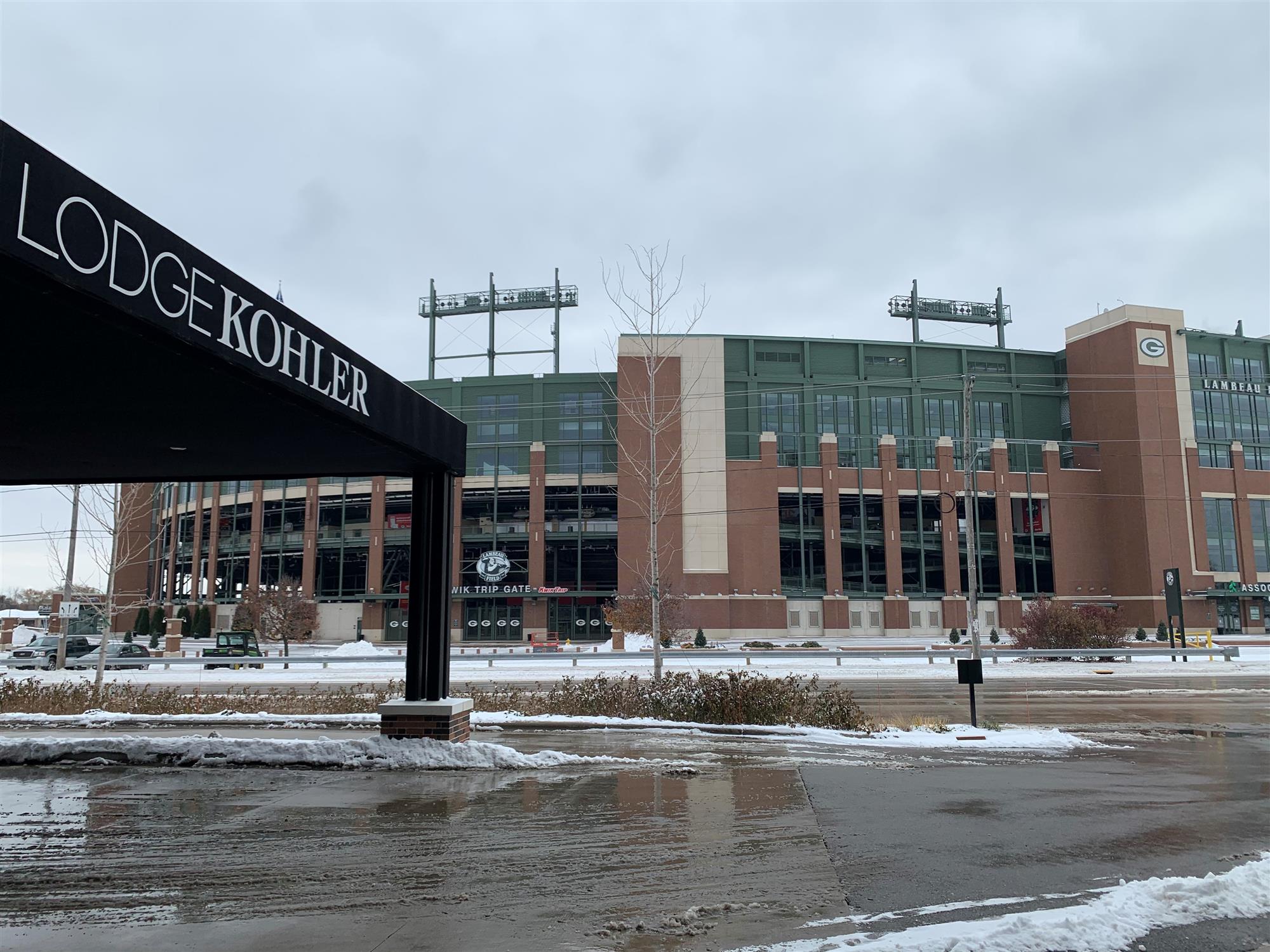 Tourism in Green Bay typically peaks from June to October, with sporting events and festivals normally serving as the primary attractions. In addition to the 80,000 square feet of meeting and event space within the KI Convention Center, the city’s convention space has been expanded by 125,000 square feet. In the summer of 2019, the 60-year-old Brown County Veterans Memorial Arena was demolished to construct the Resch Expo, a $93-million, 125,000-square-foot expo center; despite the pandemic, the Resch Expo was completed on schedule, opening in January 2021. According to the Convention and Visitors Bureau (CVB), these venues are anticipated to support local and regional tourism increases in the future. The CVB has plans for development of a new visitors’ center, which will feature public spaces and interactive displays, to be known as The Experience Greater Green Bay Visitor Center. It will be located off Interstate 41 and will be an essential part of the new Titletown development. Construction is expected to begin in the summer of 2021, with the new center anticipated to open within a year of breaking ground. 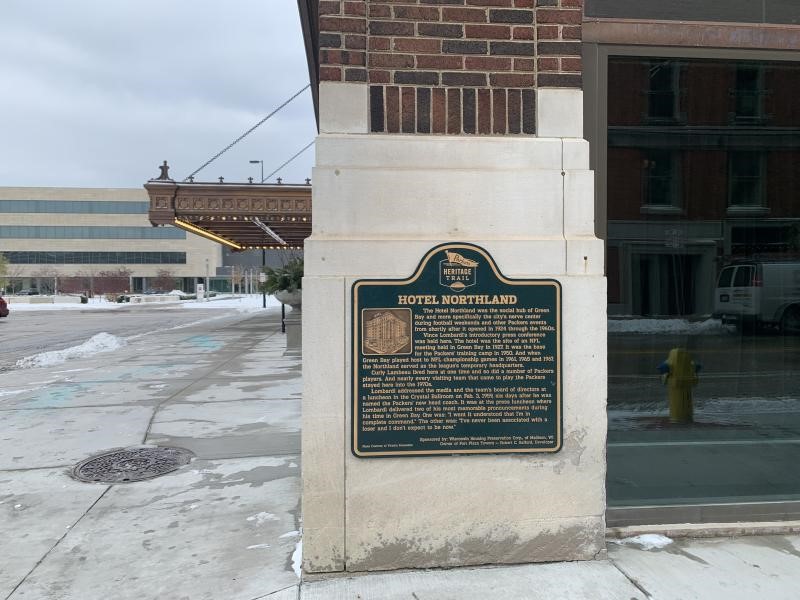 Green Bay’s expanding development in the tourism and commercial sectors should support the lodging market’s recovery along with anticipated rebound of the regional and national economies. With the Legacy Hotel slated to open within the next two years, local hotel operators will likely focus on increasing ADR after recapturing the lost occupancy associated with the pandemic. According to the CVB, corporate travel, major conventions, and citywide events should begin to resume mid-year 2021; thereafter, demand is expected to recover. Thus, the longer-term outlook for Green Bay’s hotel market is positive given the historical hotel performance trends and the overall market conditions prior to the pandemic, both pointing toward continued growth in the future.

HVS can provide full life-cycle consulting from the initial market study through brokerage and transaction advisory. Take advantage of our variety of services and market experience and make a connection today by contacting Amy Schmidt.

Amy Schmidt, a Vice President with the HVS Chicago office, graduated from The School of Hospitality Business at Michigan State University in May 2018. Prior to joining HVS in 2019, Amy worked as an Analyst for a commercial real estate company in Oakbrook, Illinois. Her prior hospitality experience includes internships at Kohler Co., Sage Hospitality, Westmoreland Country Club, and The Grand Geneva Resort and Spa. Contact Amy at +1 (815) 701-8001 or [email protected].

While Lambeau Field, the home field of the Green Bay Packers, has been around since the 1950s, the area surrounding it has undergone many transformations over the past decade given the success of the NFL team. In this article, we examine the market’s historical trends, the impact of the pandemic, and the outlook for Green Bay. %%ViewCount%% Views Comments
Share:
Subscribe To Newsletter