After experiencing year-over-year RevPAR growth since 2010, hotel supply in Downtown Madison has finally caught up with demand; however, the outlook remains positive given the diverse industries and breadth of demand generators in the market.
Madison, the state capital and seat of government for the state of Wisconsin, is home to a diverse economy, including education, healthcare, insurance, government, and technology. Although long home to the University of Wisconsin – Madison and American Family Insurance, it was the growth of Epic Systems Corporation and other healthcare technology companies and services that spurred downtown hotel and residential development over the last ten years. Increased demand for highly educated workers led to greater retention in the market of recent college graduates and improvements in quality of living.

The State Capitol district and University of Wisconsin – Madison campus area have historically been the focus of downtown development. Although these submarkets have remained strong in recent years, the area along U.S. Highway 151/East Washington Avenue and the area near the Alliant Energy Center have experienced the most change, in addition to the area immediately surrounding the Capitol. 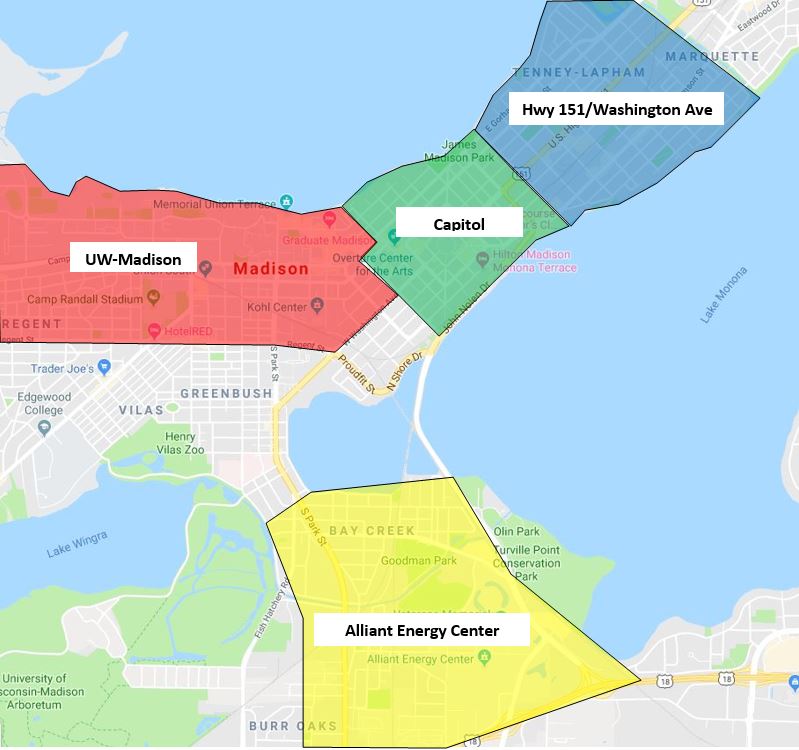 Although founded in 1979, it wasn’t until the main campus of Epic Systems was moved from Madison  to Verona in 2005 that employment levels took off. Employment at the main campus grew from 2,000 workers in 2005 to around 10,000 employees in 2018, according to local officials. The constant expansion of the campus and accelerated hiring efforts, coupled with a lack of hotel rooms in Verona, has created a surge of demand for Downtown Madison hotel rooms. Recruitment programs and weekly training seminars generate regular demand for downtown hotels, while the company’s annual User’s Group Meeting creates hotel demand as far away as the Wisconsin Dells. Increased demand levels have allowed hoteliers to push average rates to historical highs. However, this has posed a problem for Monona Terrace convention center business. The high rates in the market, as well as the limited number of hotel rooms within walking distance of the convention center, have limited the type of business the convention center can attract. Thus, in recognition of the need for rooms near Monona Terrace, the City offered Judge Doyle Square for hotel development. A 250-room Embassy Suites by Hilton won the project, to be part of a mixed-use development across the street from the convention center. Although this hotel is not expected to break ground until early 2020, upon completion, it should allow the convention center to increase business given the addition of more hotel rooms nearby.

Meanwhile, the Alliant Energy Center (AEC) campus, which comprises four unique venues, has continued to generate meeting and group demand associated with large agricultural and equine events, including the World Dairy Expo and Midwest Horse Fair. Since 2017, Dane County, City of Madison, Greater Madison Chamber of Commerce, and Greater Madison Convention & Visitors Bureau officials have been working together on a master plan for modernizing and upgrading the AEC campus. New development efforts and the refurbishment of existing venues will reportedly begin in 2021.

While Madison has long been a popular leisure destination given the surrounding natural attractions (Lake Mendota and Lake Monona), the State Capitol, and the University of Wisconsin – Madison (particularly sporting events), demand has grown in recent years thanks to increased popularity of citywide events. Since 2017, Madison has been home to the annual CrossFit Games. Although the popularity of the games is no longer at its peak, the four-day event continues to draw leisure demand to the market, as well as increase Madison’s popularity as an athletic competition destination. For the first time, Madison will host the National Veterans Golden Age Games in June 2020. Furthermore, Madison has hosted Ironman Wisconsin every year since 2002. In 2018, the contract was extended through 2021. The annual event attracts approximately 2,500 athletes from around the world and more than 25,000 spectators.

Between the 2001 opening of the Hilton Madison Monona Terrace and the 2010 opening of the Hyatt Place Madison Downtown, new supply growth was limited to the outskirts of Madison, with little change to the Downtown submarket during that time. It wasn’t until 2010, when the market began to recover from the recession and Epic Systems demand began to grow exponentially, that new hotels were introduced in Downtown Madison. Between 2010 and September 2019, approximately 1,000 new guestrooms entered the Downtown submarket, reflecting a supply increase of more than 50%. During that same time, the Best Western Premier Park Hotel and the Graduate Hotel Madison (formerly the Campus Inn) underwent major, property-wide renovations. The luxury Edgewater Hotel also closed and was reconstructed on an adjacent site during this time. Furthermore, the AC Hotel by Marriott was the first Marriott product Downtown when it opened in 2017, and the 2020 opening of the Hotel Indigo signaled continued investment along the U.S. Highway 151/East Washington Avenue corridor. Lastly, hotel supply near the Alliant Energy Center grew with the 2016 opening of the Holiday Inn Express & Suites and the 2019 opening of the Home2 Suites by Hilton Madison Central Alliant Energy Center. More than 800 rooms are currently in the pipeline, although nothing has broken ground yet, including the proposed Embassy Suites by Hilton Judge Doyle Square, the independent State Street Hotel, the independent King Street Hotel, and the proposed Drury Inn & Suites, to be developed on the site of the old Madison Area Technical College.

After increasing by more than 33% between 2012 and 2018, RevPAR growth is poised to slow as the market absorbs the new supply and as hoteliers are forced to temper rate increases. However, meeting and group demand associated with Monona Terrace and the AEC Campus is expected to increase upon completion of the aforementioned respective projects. Furthermore, the diversity of demand generators in the market is anticipated to support continued hotel demand and development in the near future.

After experiencing year-over-year RevPAR growth since 2010, hotel supply in Downtown Madison has finally caught up with demand; however, the outlook remains positive given the diverse industries and breadth of demand generators in the market. %%ViewCount%% Views Comments
Share:
Subscribe To Newsletter