In 2018, Los Angeles welcomed a record 50 million visitors, with hotel occupancies and average rates reaching peak levels. Nevertheless, hotels have begun to feel the effects of new supply. This article provides an outlook for 2019.

Los Angeles now ranks as one of the most economically powerful cities in the world, supported by a robust office market, a growing tech sector, and of course, a near-perfect, year-around climate that continues to drive high levels of visitation. This has resulted in healthy hotel occupancies and average daily rates (ADR) despite a 3.1% increase in supply in 2018. In 2018, L.A. added approximately 56,800 jobs, representing a 0.9% increase over the prior year. The city’s economic drivers continue to be the entertainment industry, the Port of Los Angeles/Long Beach, leisure and hospitality, retail, manufacturing, and education and health services. The entertainment industry, including the powerhouses of Walt Disney Co., NBCUniversal, Paramount Pictures, and Sony Pictures, among others, together with the Port of Los Angeles/Long Beach, contribute $1 billion to the economy alone daily. Most recently, Netflix announced a major expansion in Hollywood, continuing to rise as a major contributor in this space. The technology sector is also growing rapidly, with 450,000 employees in this field, including major players such as Google/YouTube, Apple, Netflix, and Yahoo!. In particular, Google/YouTube and Apple have continued with aggressive expansions in Playa Vista and Culver City, respectively, which combined with multiple expansions across other tech firms, is further cementing the submarkets of Santa Monica, Playa Vista, Venice, and Culver City as Silicon Beach.

Excluding office submarkets in Orange County and Riverside County, Los Angeles is home to one of the largest office markets in the country, after Manhattan, with over 200 million square feet of office space. The bulk of this supply is in Downtown L.A. and other West L.A. submarkets, such as Century City, Hollywood/West Hollywood, Santa Monica, and LAX. High barriers to entry related to new construction continue to keep office vacancies low and asking lease rates high. About 23 major office space projects are currently under construction in the city, representing 3.8 million square feet of office space, or a 2% increase in supply, which is anticipated to enter the market in the next 18 to 24 months. Given the limited increase, no major changes in vacancy rates are expected, while the average asking lease rate should continue to increase at the rate of inflation.

As noted previously, over 50 million people visited Los Angeles in 2018, representing an increase of approximately 3.1% over 2017. This represents the eighth consecutive year of tourism growth for the L.A. area, attributed in part to higher visitation levels from travelers originating from Mexico, China, Canada, U.K, and Japan; in fact, Los Angeles is now the #1 most visited U.S. destination by Chinese travelers. Visitation in 2018 generated over 30 million hotel room nights. While the bulk of visitation occurs during the summer months when temperatures are most ideal for tourism, visitation has been increasing during the winter months and during shoulder periods, as well. With L.A. serving as host to the 2022 Super Bowl at the now-under-construction L.A. Stadium at Hollywood Park, as well as the 2028 Summer Olympics, it is certain that tourism will continue to rise for the market. Additional expansions and improvements at LAX, as well as above-expected growth in arrivals at L.A.-area airports, bode well for the future of tourism. 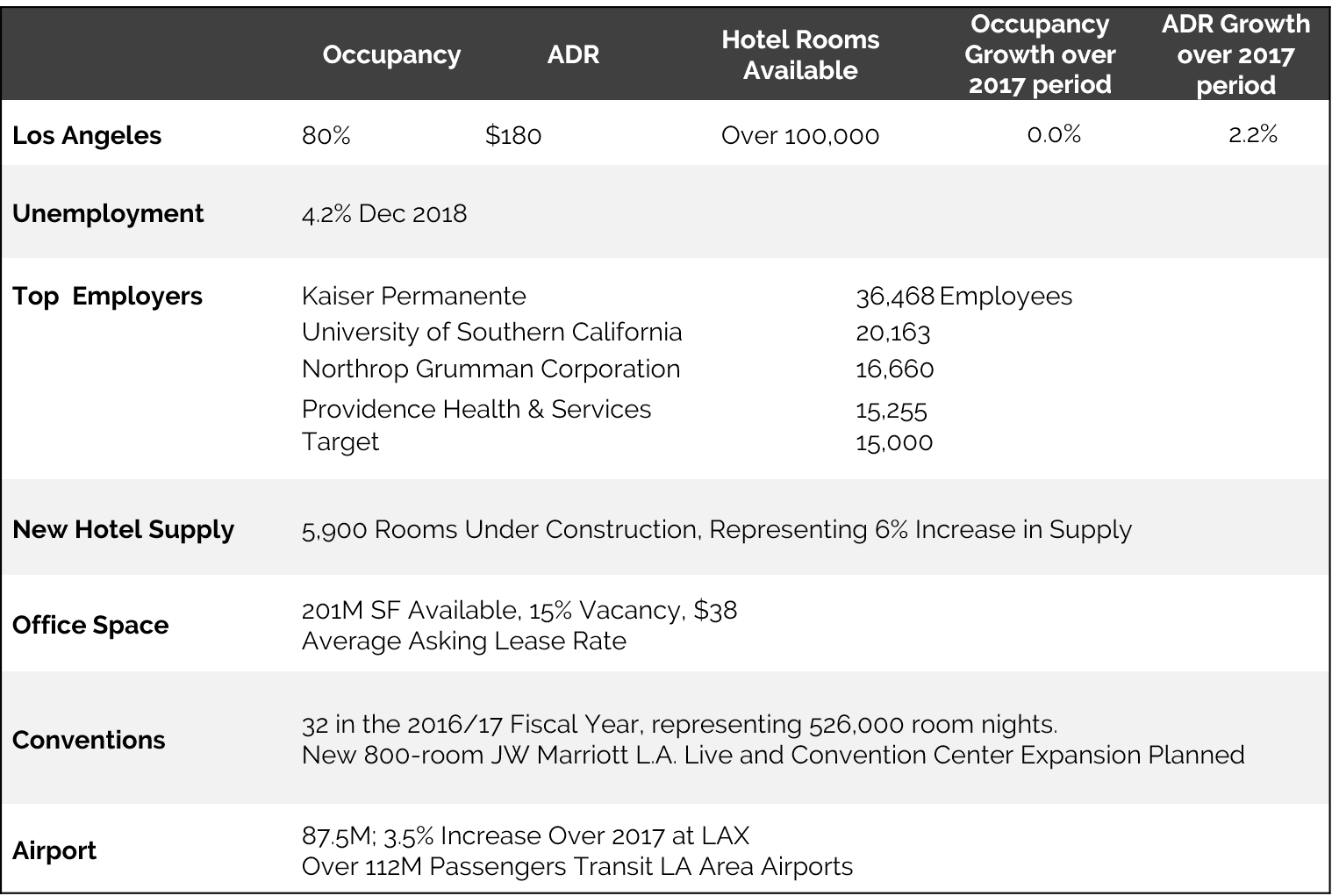 Source: HVS Research
With over 30 high-rise buildings under construction or proposed in or near the Downtown submarket alone, Downtown L.A. continues to play in a league of its own. While these projects encompass various types of developments, including office, hotel, and residential, it is no surprise that the bulk of new hotel supply that is currently under construction in the L.A. area is in this submarket, with approximately 1,500 rooms. Most recently, the City approved nearly $100 million as part of a $1.25-billion project led by AEM that includes the expansion of the convention center, as well as an 850-room expansion of the existing JW Marriott hotel at L.A. Live. Once completed, the expansion will allow the market to better compete with other convention center destinations. Last, but certainly not least, the hotel sector in L.A. has made great leaps and strides over the last decade. Rising from what now seems like a depressing 65% occupancy in 2009, to solidly hovering near 80% occupancy over the last four years, we are now in a new era for hotels in this market. For years, the market has remained undersupplied by hotels because of strict and challenging development rules. Conversations with developers reveal that it usually takes at least three years to take a hotel from idea to a groundbreaking due to a lengthy entitlement process. With typical construction periods of 18 to 24 months, any new hotel projects in the market can easily take five years. As such, both existing hotels and those now entering the market continue to benefit from limited increases in supply, which coupled with steadily rising demand levels, has pushed RevPAR levels to new records, rising nearly 70% over the last nine years (compared to 49% in the top 25 markets across the nation). Despite rumors of hundreds of hotels being proposed for the L.A. market, the reality is that annual increases in supply have remained tame given the challenging development process. In 2017 and 2018, the L.A. market experienced an average increase in supply of 2.7%, with another yearly increase of 3.0% expected in 2019 and 2010. While demand levels have generally kept pace with the increases in supply, 2019 is poised to experience a slight dip in RevPAR levels while the market works to absorb these steady increases in supply, which have not only begun to affect occupancies, but have also placed downward pressure on average rates. Nevertheless, over the long term, the fundamentals remain strong. The multitude of demand generators, related to both the leisure and commercial segments, in L.A. should continue to benefit hotels, and while any near-term dips may surprise some that have not seen negative growth in the last nine years, we have to remember we are now speaking of a significant healthier and deeper hotel market than ever before, fueled by a robust economic engine.


HVS continues to regularly consult in California, with Consulting & Valuation offices in Los Angeles and San Francisco. Luigi and his team are ready to assist you on any consulting need you may have. Eric Guerrero with HVS Brokerage can also discuss any California-area asset you may be considering selling in 2019.