Boston’s burgeoning Waterfront District has been part of a rising tide of demand for local hotels, and expansion of the city’s convention market has created a need for thousands of additional rooms. 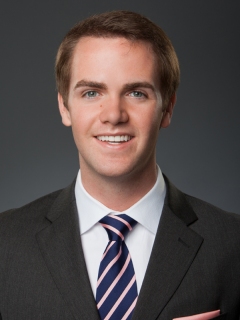 Boston’s harbor has been instrumental to the city’s evolution for more than two centuries. Known today as the South Boston Waterfront and Seaport District, the area’s cornerstones of revitalization include the Boston Convention & Exhibition Center, the Institute of Contemporary Art, and the HarborWalk. These and other developments have brought healthy increases in demand to Boston hotels, and the city and private developers are working toward even more pronounced demand growth. The following article looks at present challenges and the opportunities that lie ahead.

Boston is home to two full-scale convention centers, the Boston Convention & Exhibition Center (BCEC), located along Summer Street in the Seaport District, and the John B. Hynes Veterans Memorial Convention Center in Boston’s Back Bay. The $850-million, 2.1-million-square-foot BCEC opened in 2004 and has made Boston a powerful presence in the convention and meetings market in New England.

As owner and operator of the BCEC and the Hynes Center, the Massachusetts Convention Center Authority (MCCA) has become a crucial component of the region’s economic engine. Officials at the MCCA have proposed a master plan to elevate Boston to a “Top Five” destination in the national conventions and meetings marketplace1. Of especial interest for existing and potential hotel stakeholders, the master plan calls for additional hotel supply within the South Boston Waterfront in addition to the expansion of the BCEC’s multipurpose ballroom and exhibit space 2.

Except for the adjacent 793-room Westin hotel, the vicinity the BCEC consists primarily of parking lots, raised roadways, tunnel ramps, and undeveloped land. While millions of square feet of future commercial developments, now in various stages of planning, permitting, and construction, should emerge over the next several years, new hotel supply has lagged behind3. With fewer than 1,700 hotel rooms within one-half mile of the facility, the BCEC relies on hotels in the Back Bay, the Hynes Center’s home turf. This in turn leaves the Hynes Center with insufficient hotel room inventory, leading to increased transportation costs and inconvenience for convention delegates at either facility.

In an effort to overcome this hurdle, the proposed master plan calls for a coordinated strategy that includes the development of an additional headquarters hotel with 1,000 to 1,200 rooms proximate to the BCEC, as well as the expansion of the Westin Boston Waterfront hotel. The hotels that currently service the BCEC are either luxury or upper-upscale properties; to diversify lodging options and appeal to a greater breadth of potential event planners, exhibitors, and delegates, the master plan also proposes the development of new, more affordable hotels4. Just as the BCEC brought about a need for more hotels, the master plan proposes a need to expand the center itself once new hotel supply comes aboard. An exhibit-hall expansion coupled with a new, larger multipurpose space would allow the scheduling of overlapping events and potentially thousands more delegates and room nights per year5.

The cost of construction on sites proximate to the BCEC is somewhat prohibitive because of the obstacle of extensive underground infrastructure left behind from the “Big Dig.” The dearth of available financing for new hotel construction over the past several years has also been a barrier to entry for proposed hotels. At present, assistance from the public sector is being sought through initiatives in the state legislature, the Governor’s office, and the City of Boston. These initiatives include pre-permitting of development sites, complementary development of neighboring sites through strategic land acquisition and control, and the easing of hotel-development restrictions “South of Summer Street,” a fertile development ground for the lower-priced hotels proposed in the master plan6.

MCCA officials expect 2012 to be the best year for convention business since 2007. Events held at the BCEC and Hynes Center are expected to generate approximately 601,000 hotel room nights and $625 million in economic impact7. The general strengthening of the convention and meetings market has led to an increasing number of national and international attendees destined for the Boston area, and the demand for lodging is expected to outpace attendance growth in the near future as convention trends strengthen further. The continued success of the area’s education, medical, and technology sectors has increased the city’s magnetism, drawing in major events such as the National School Boards Association’s Annual Conference, the Biotechnology Industrial Organization’s International Convention, the Penny Arcade Expo (PAX) East, and many others8.

The table below details aggregate usage statistics for both of Boston’s convention centers.

Boston’s well-established and diversified economic base somewhat shielded the city’s economy from the impact of the recent recession, and this includes the lodging sector. The following table presents occupancy, average rate, and RevPAR statistics from 2005 through 2011 for a select set of hotels representative of Boston’s full- and select-service hotel market.

Citywide occupancy levels are likely to remain relatively stable, even with the proposed array of new supply. Boston’s improving economy, and demand from segments with stakes in new and upcoming retail, office, and convention developments, should allow for sizable average rate gain over the long term. The entrance of high-end hotels like the Hotel Veritas, the Ames Hotel, and the W Hotel Boston should further bolster average rates.

New Hotel Supply on the Waterfront

Developers are already heeding the calls for increased hotel supply in the South Boston Waterfront. Following are the hotel projects presently approved by the Boston Redevelopment Authority (BRA)9.

The HVS 2011 U.S. Hotel Valuation Index forecasts moderate growth in Boston’s hotel values through 2015. Boston’s per-room values declined in 2008 and 2009, but recovered substantially in 2010. The table below illustrates historical and forecasted per-room values for Boston hotels. 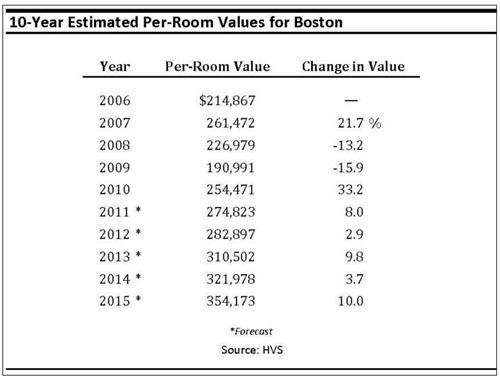 Boston is a gateway city, an advantageous trait when it comes to potential economic growth. The city’s well-developed transportation infrastructure will only aid in channeling new sources of demand for the convention facilities and hotels, both existing and proposed, in the Seaport District and Back Bay. As various master plans find anchor, the new developments they sail into harbor should buoy local hotels above the troubled tides of the recent recession.

Preston Puleo, MAI, is a Director with the HVS Boston and New York offices, a Designated Member of the Appraisal Institute (MAI), and a state-certified general appraiser. His consulting experience encompasses all hotel property types and brand segments in lodging markets throughout New England and the New York-New Jersey region. Before joining HVS, Preston worked as an associate with a hotel asset management firm in Providence, Rhode Island. His prior hospitality experience also includes internships at resorts and country clubs in Georgia and North Carolina. Preston graduated with honors from Cornell University's School of Hotel Administration. For more information contact Preston at +1 (910) 723-3579 or [email protected].

Boston’s burgeoning Waterfront District has been part of a rising tide of demand for local hotels, and expansion of the city’s convention market has created a need for thousands of additional rooms. %%ViewCount%% Views Comments
Share:
Subscribe To Newsletter