Orlando has long been distinguished as an iconic vacation destination by continuing its ranking as the No. 1 destination in the United States, according to Visit Florida. Since 2013, Orlando has reigned as the nation’s “Most Visited Tourist Destination.” With multiple factors driving Orlando’s appeal, hotel investors and developers are curious as to what is on the horizon for the hospitality market in Central Florida. 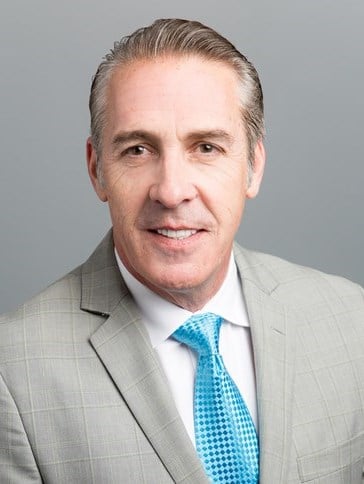 Orlando has long been distinguished as an iconic vacation destination by continuing its ranking as the No. 1 destination in the United States, according to Visit Florida. Since 2013, Orlando has reigned as the nation’s “Most Visited Tourist Destination.” With multiple factors driving Orlando’s appeal, hotel investors and developers are curious as to what is on the horizon for the hospitality market in Central Florida. With a variety of hotels and attractions in the Metro Orlando pipeline, and major international brands continuing investment in the market, the metrics point toward continued success in 2020 and beyond.

Combined passenger traffic at the Orlando International Airport (MCO) surpassed 50 million passengers for the first time in 2019, up 6.11% over last year. Domestic travel increased 5.7%, while international passenger volume was up a strong 8.4%.

With more than 50.6 million annual passengers, MCO is the busiest airport in Florida and the tenth busiest in the U.S. According to the Greater Orlando Aviation Authority, the airport is currently engaged in a $4.2-billion capital improvement program to increase capacity and enhance customer convenience. Most notably, Phase I of the improvement project will include the $2.8-billion South Terminal, set to debut in late 2021. The new, state-of-the-art facility will add 19 new airline gates to accommodate up to 27 aircraft, including narrow body, jumbo, and super-jumbo jets. These planned improvements should allow MCO to handle traffic increases moving forward.

According to official statements, the September termination of flight service by Thomas Cook Airlines notably affected volume at MCO in 2019. The airline, which had served MCO since 2014, averaged between two and sixteen flights per week, depending on the time of year. Thomas Cook offered service between Orlando and destinations like Manchester, London, and Glasgow. The loss accounted for 12,000 of the 30,000 fewer seats into Orlando International when compared to November 2018. Domestic seat capacity, however, increased by 6.8%, with an additional 268,000 seats available year-over-year.

As the United States’ most visited destination, Orlando theme parks offer some of the most desired attractions in the world.

According to the TEA Global Attractions Attendance Report, dated May 2019, Walt Disney's Orlando parks welcomed a total of 62,585 million visitors, up 4.3% over the prior year, accounting for nearly 66% of the 95,095 million theme-park-visitor market share owned by Disney, Universal, and SeaWorld parks. The year 2019 marked another milestone for Orlando, as the highly anticipated Star Wars: Galaxy’s Edge opened at Disney’s Hollywood Studios and as Universal Orlando unveiled its next theme park, Universal Epic Universe, which will be Orlando’s eighth theme park. These new attractions are expected to have a profound impact on the area’s correlating economics. 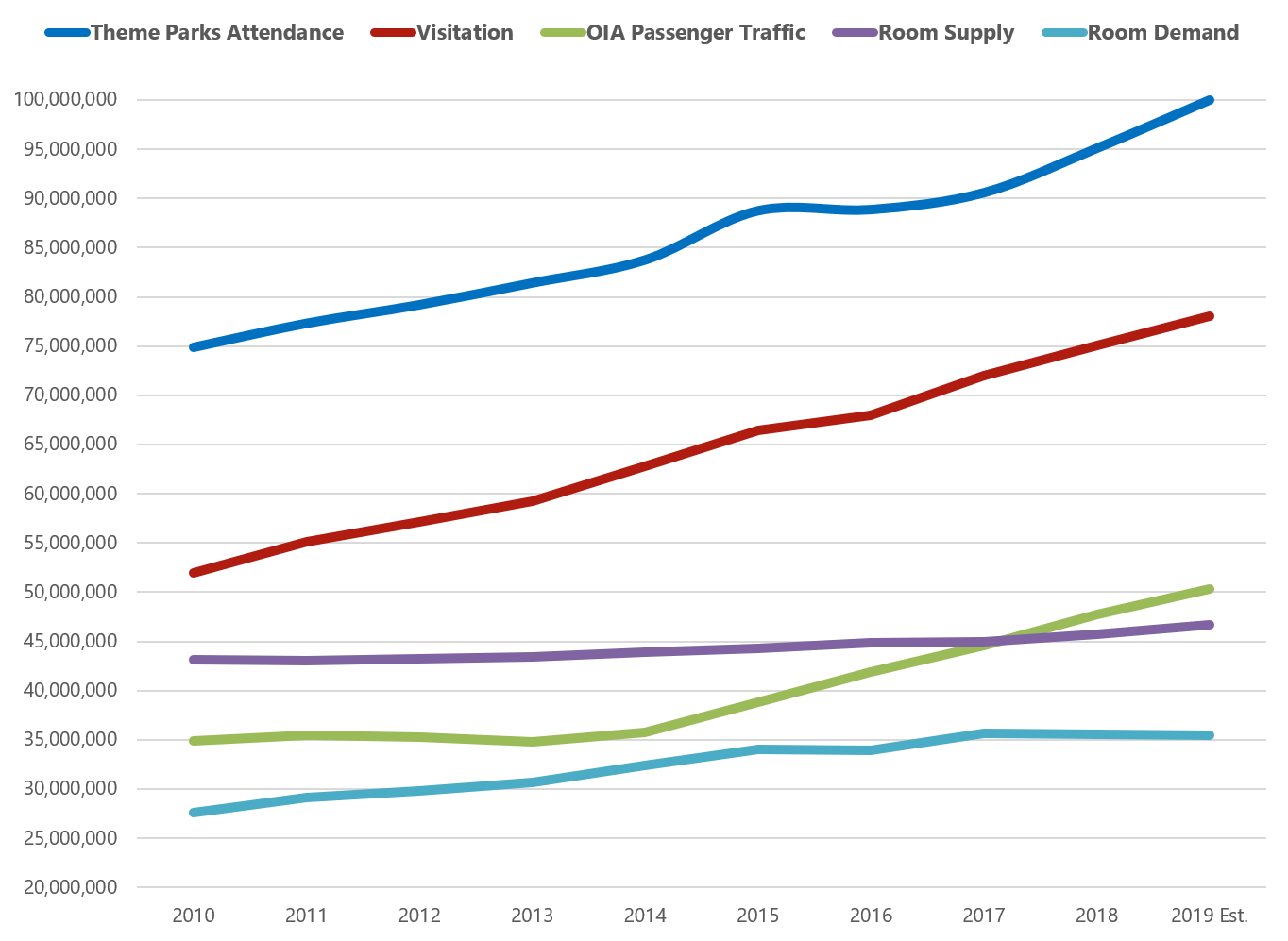 Universal’s 750-acre Epic Universe’s new gates will allow for a massive expansion, including the recently announced Nintendo theme park scheduled to open in 2023, an entertainment center, several new hotels, shops, and retail components to support these expansions. The venture will have a major impact on Central Florida, including the potential to draw millions of new visitors to the region, creating more than $11 billion in new economic impact. With the openings of the sixth hotel in the theme park, Universal’s Aventura Hotel, along with two new towers at Cabana Bay Resort and the 750-room Endless Summer Resort, Universal’s current inventory is 6,950 rooms. Another 2,050 rooms at Universal’s Dockside Inn & Suites will bring the company to 9,000 rooms across eight hotels in 2020.

Comparing this to Orlando’s ever-growing vacation home market, often referred to as Orlando’s “phantom room inventory,” Encore Resort at Reunion, a single-family vacation home community, will contain 769 luxury pool homes ranging from four to thirteen bedrooms at build-out, which is equivalent to over 5,000 hotel rooms.

The Orange County Convention Center (OCCC) is a vital component of the economic health of Orlando’s hotel market and provides an average annual economic impact of $2.4 billion to the Central Florida economy. OCCC is the second largest in contiguous space in the U.S., with over 2.3 million gross square feet. A $605-million expansion is currently underway that will include a new concourse connecting the North and South Concourses and will feature an 80,000-square-foot ballroom and a 200,000-square-foot multipurpose room that can hold between 18,000 and 20,000 people with retractable seating. The project is scheduled to be completed in 2023. 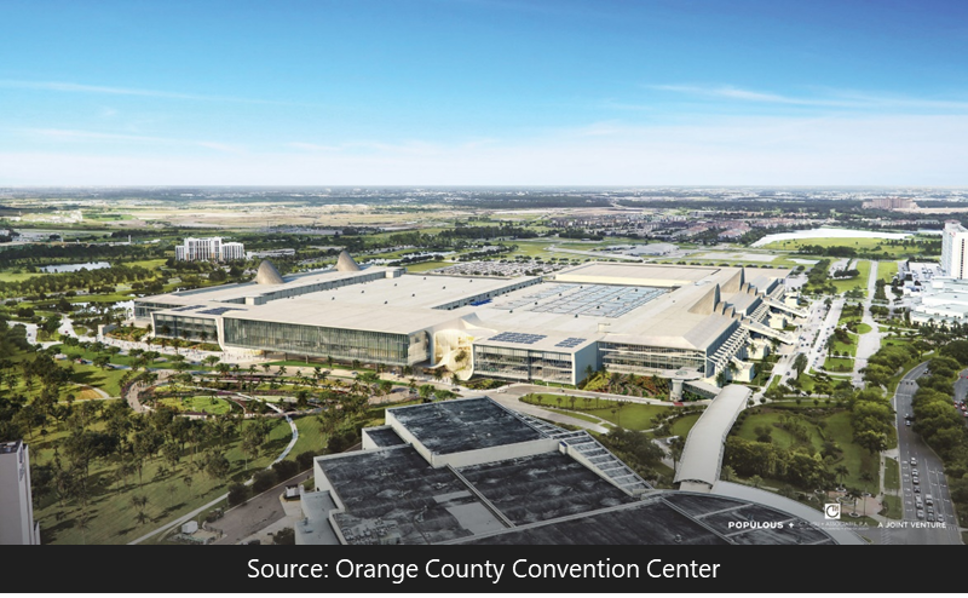 Port Canaveral is one of Central Florida’s greatest assets when it comes to cruise-related tourism by creating pre- and post-sailing hotel demand. Construction is on schedule at Cruise Terminal 3 with a new, $163-million facility dubbed “Launch Pad.” This facility will allow the world’s second-busiest sea hub to accommodate mega cruise ships, which will bring more visitors to the port and benefit the overall region. The 188,000-square-foot passenger terminal will be home to Miami-based Carnival Corporation’s new Mardi Gras cruise ship, the largest in the company’s fleet, carrying up to 6,500 passengers when it begins sailing in 2020.

The Port continues to boost its technological capabilities, aiming to add facial recognition technologies to help process passengers at a quicker pace. Cruise Terminal 1 already uses the technology and has had success in processing passengers quicker, which affects the overall guest experience.

Other projects include the renovation of Cruise Terminals 8 and 10, which will be used by Disney Cruise Line and Norwegian Cruise Line. The overall project includes improving Terminal 8, Disney’s primary facility with a new baggage-screening area, a larger arrivals hall and concierge area, a new ADA-compliant ramp for disembarking passengers, a new jetway-style passenger boarding bridge, and more terminal seating. The Terminal 10 upgrades include expanding the entrance bridge, adding a new concierge area, expanding seating, and adding new restrooms and other amenities for a future Disney Cruise Line ship.

Now let’s get started with a deep dive into the performance metrics of Metro Orlando’s hotels and resorts.

According to STR, as of December 31, 2019, the greater Metro Orlando region (including Orange, Osceola, and Seminole Counties) boasted 486 hotels with a total of 127,809 guestrooms, up 1.9% over the 2018 year-end inventory of 125,370 guestrooms. Based on market intelligence conducted by HVS Orlando, deliverables in 2020 will collectively introduce 4,702 rooms spread among 15 new hotels in the Metro Orlando market. Thus, Orlando’s tri-county room supply will increase by 3.7% in 2020. The two largest projects entering the market are the 561-room JW Marriott at Bonnet Creek and Universal’s 2,050-room Endless Summer Resort Dockside Inn & Suites. Together, these two entrants account for roughly 55% of the total 2020 new supply pipeline. Our analysis excludes nine additional hotels collectively containing 2,021 rooms that are currently under construction. Many of these hotels are located near the western edge of the coverage area but are not expected to be completed within this calendar year. 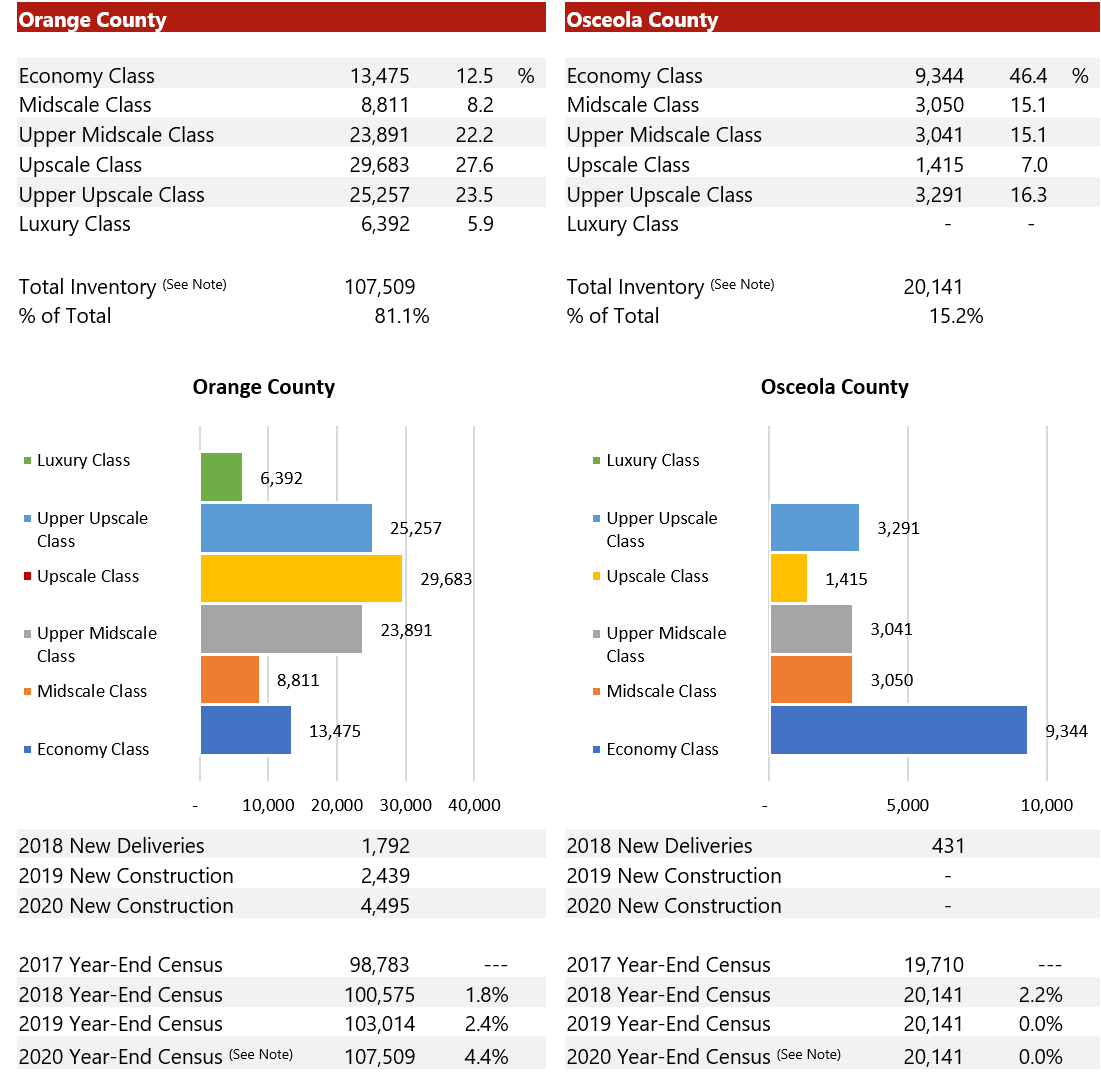 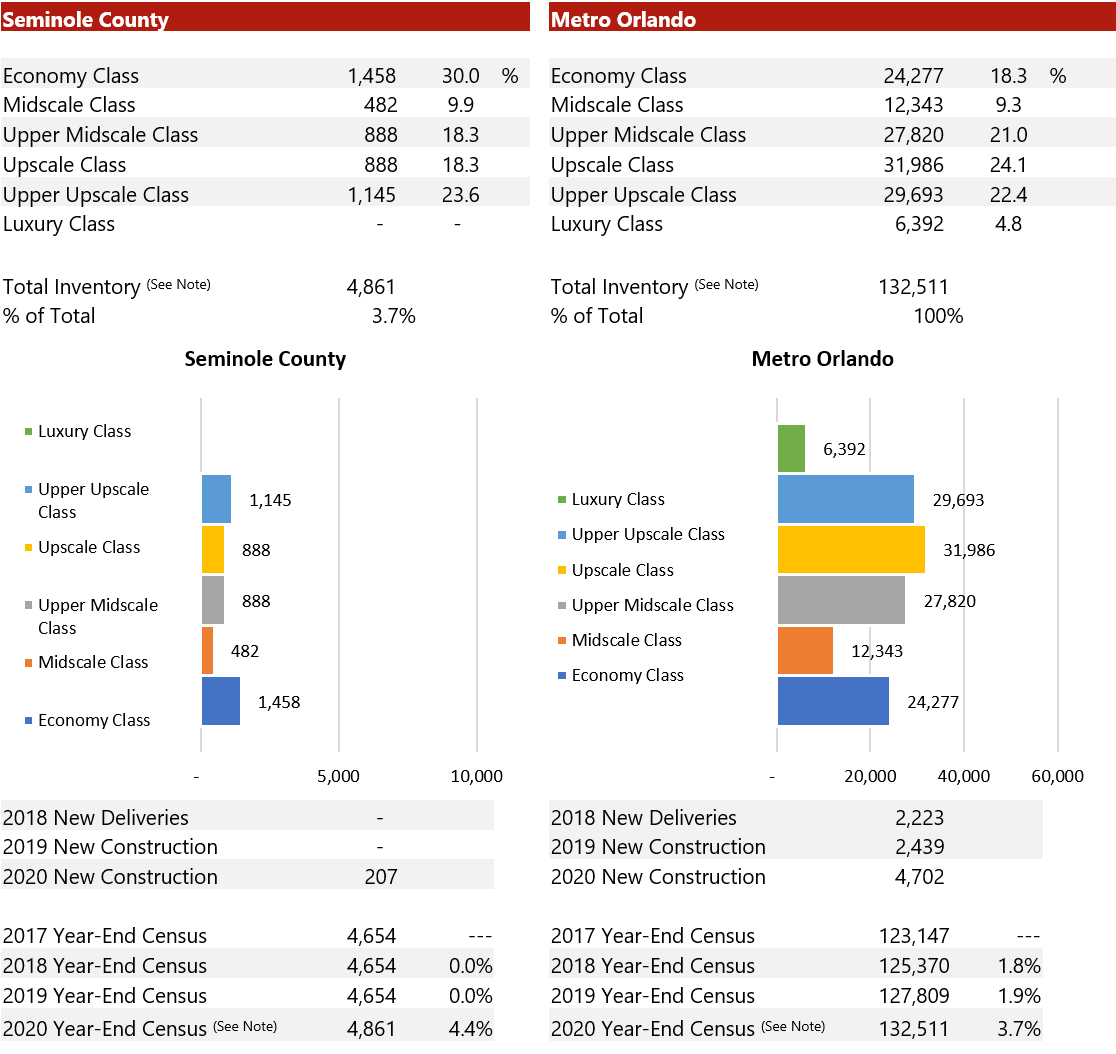 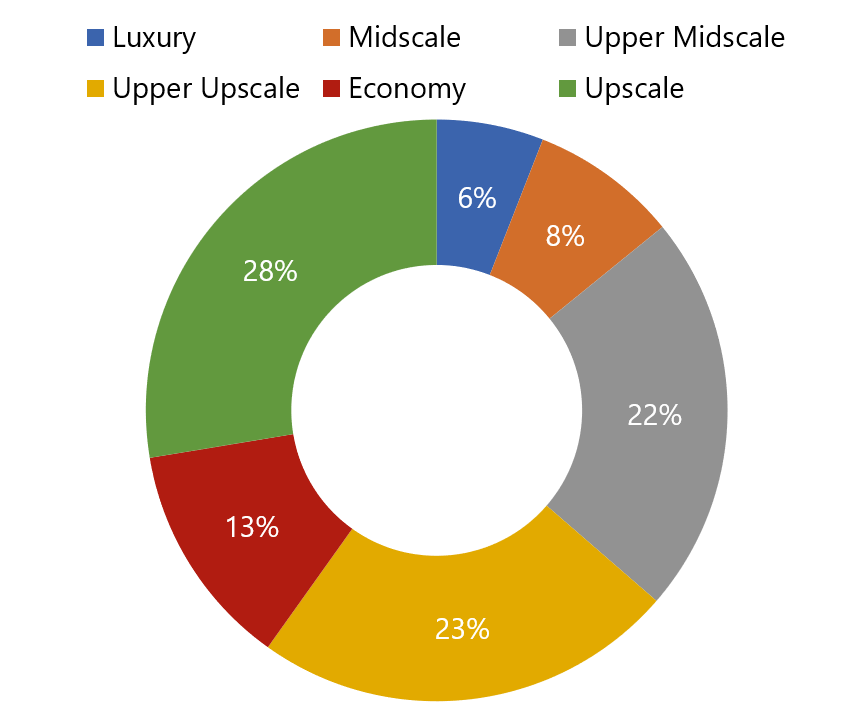 Our year-over-year review specific to inventory composition, by STR chain scale, reveals an 89.5% increase in the number of rooms classified as upper-midscale, a 35.3% increase in the upper-upscale tier, and a 26.4% increase in the midscale segment. The 2020 data show a significant lateral move out of the upscale tier, declining by nearly 17,000 rooms spread among nine properties. Contributing factors to the shift in classification (or reclassification) are attributed to new product entering the market, post-renovation reclassifications, and changing performance indices meeting STR’s reclassification criteria. The data demonstrate the ever-changing dynamics of the Metro Orlando hotel market, giving support for on-the-ground knowledge an insight, a major consideration in selecting the right consultant for your project. 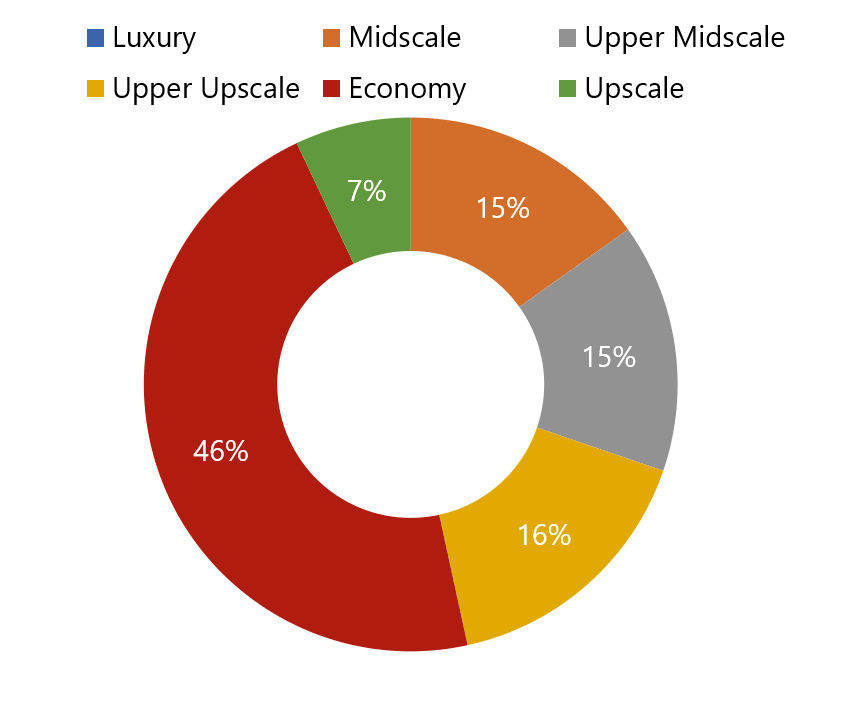 Source: HVS, STR & Visit Orlando Market Research and Insights Department
For Osceola County, the data indicate a shift of three assets in the upper-midscale and upscale tier group (representing 1,389 rooms), as well as an increase of four assets to the economy class segment. One of the newest entrants to the Osceola County market is the 184-room Jimmy Buffet-themed Margaritaville Resort that opened in early 2019. Room inventory is expected to remain flat in 2020. This market is dominated by economy hotels, which represent 46% of the overall market. However, this market is heavily influenced by vacation home inventory. Within this market, signs of hotel conversion to apartment use are on the rise, such as the 550-room Red Lion Kissimmee Maingate, among others. 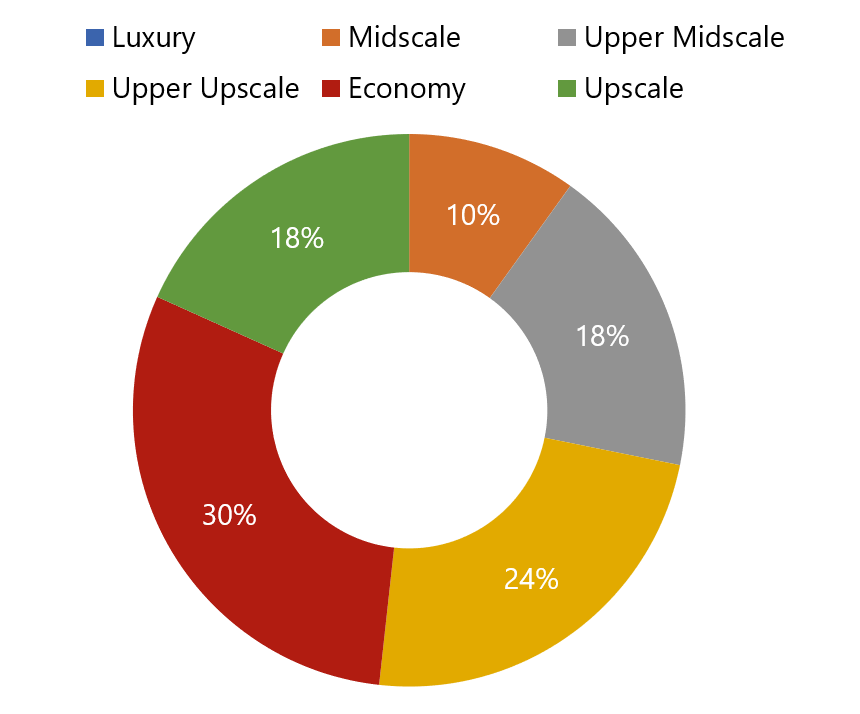 The entrance of new supply, coupled with a correction in demand levels related to the aftermath of Hurricane Irma in Q4 2017, contributed to the latest trend. Moreover, the later timing of Easter in 2019 affected the Spring Break vacations, which affected room rates, as well. Additionally, the prolonged threat of bad weather surrounding Hurricane Dorian influenced many vacationers’ travel plans over the Labor Day weekend, causing a 9.0% drop in September’s occupancy (67.7% in 2018 to 61.6% in 2019). ADR also decreased that month, dropping 3.2% to $104.78 (versus $108.21 in 2018). Year-end results were also affected by drops in occupancy (-6.5%) and ADR (-3.5%) in June, and weak performing metrics in January, with occupancy and ADR declining -4.9% and -2.6%, respectively. Metro Orlando’s lodging sector recently posted its strongest growth in November; occupancy (76.5%) rose 3.5% over November 2018, while the ADR ($125.55) went up 4.8%, room-nights sold rose 5.2%, and RevPAR jumped 8.5%. Closing out the year, December’s strong performance benefited from popular college football games held at Camping World Stadium and the official opening of Star Wars: Galaxy’s Edge ride. 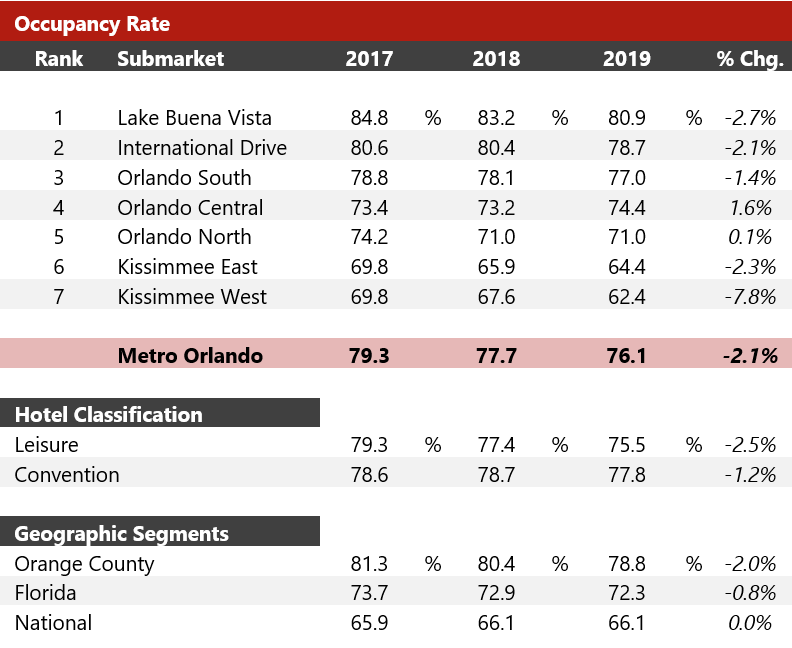 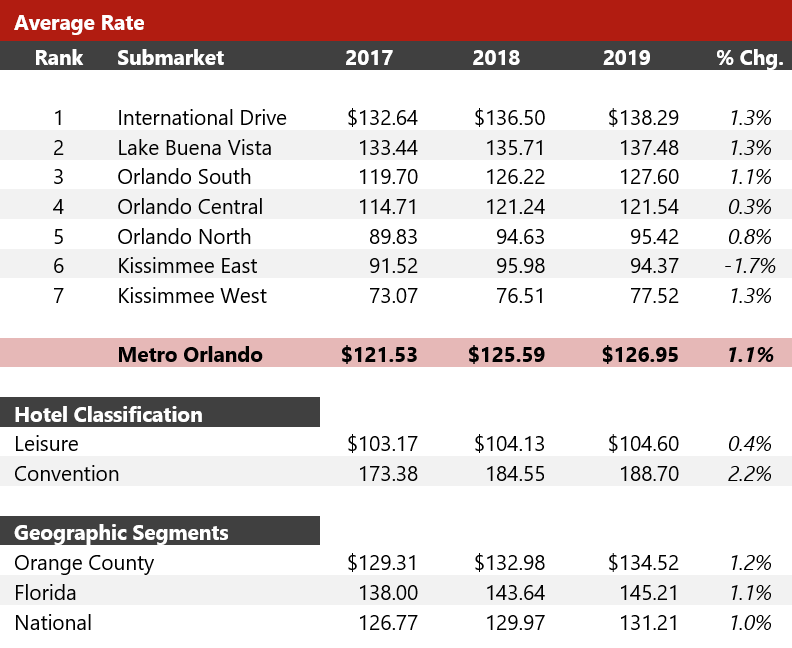 Positive RevPAR growth over the past nine years has brought the competitive market from the depth of the Great Recession to performance levels not seen in some time, and while RevPAR declined in 2019, it did so by a mere 1.0%.

Metro Orlando – A Year in Review

Metro Orlando’s 2019 performance levels are graphically presented below on a month-by-month percentage-change basis. From an annual perspective, the Lake Buena Vista submarket has consistently registered the highest occupancy ranking of the seven submarkets constituting the Metro Orlando area. On the other hand, the International Drive submarket recorded the highest ADR over the past two years by overtaking the Lake Buena Vista submarket. 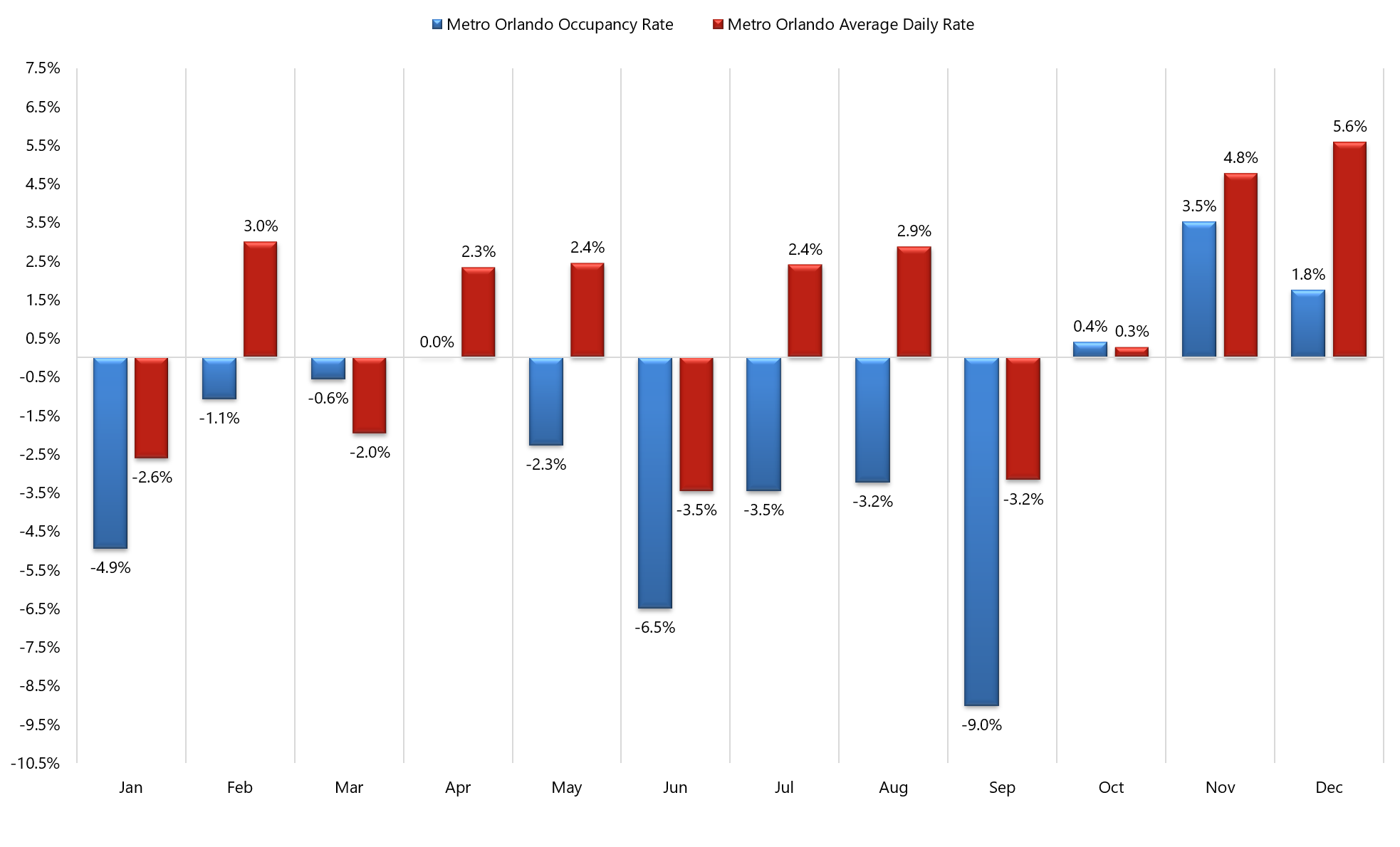 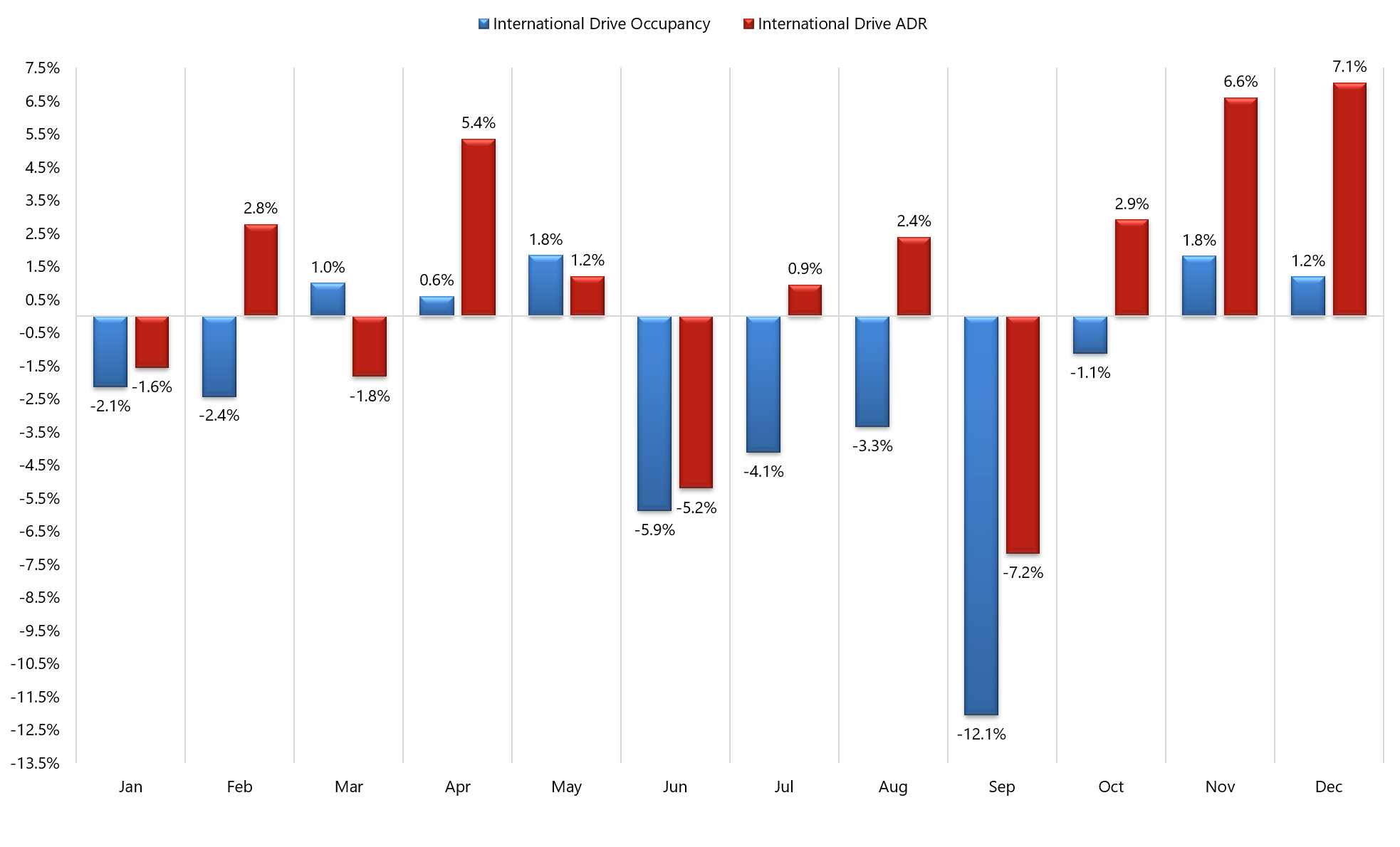 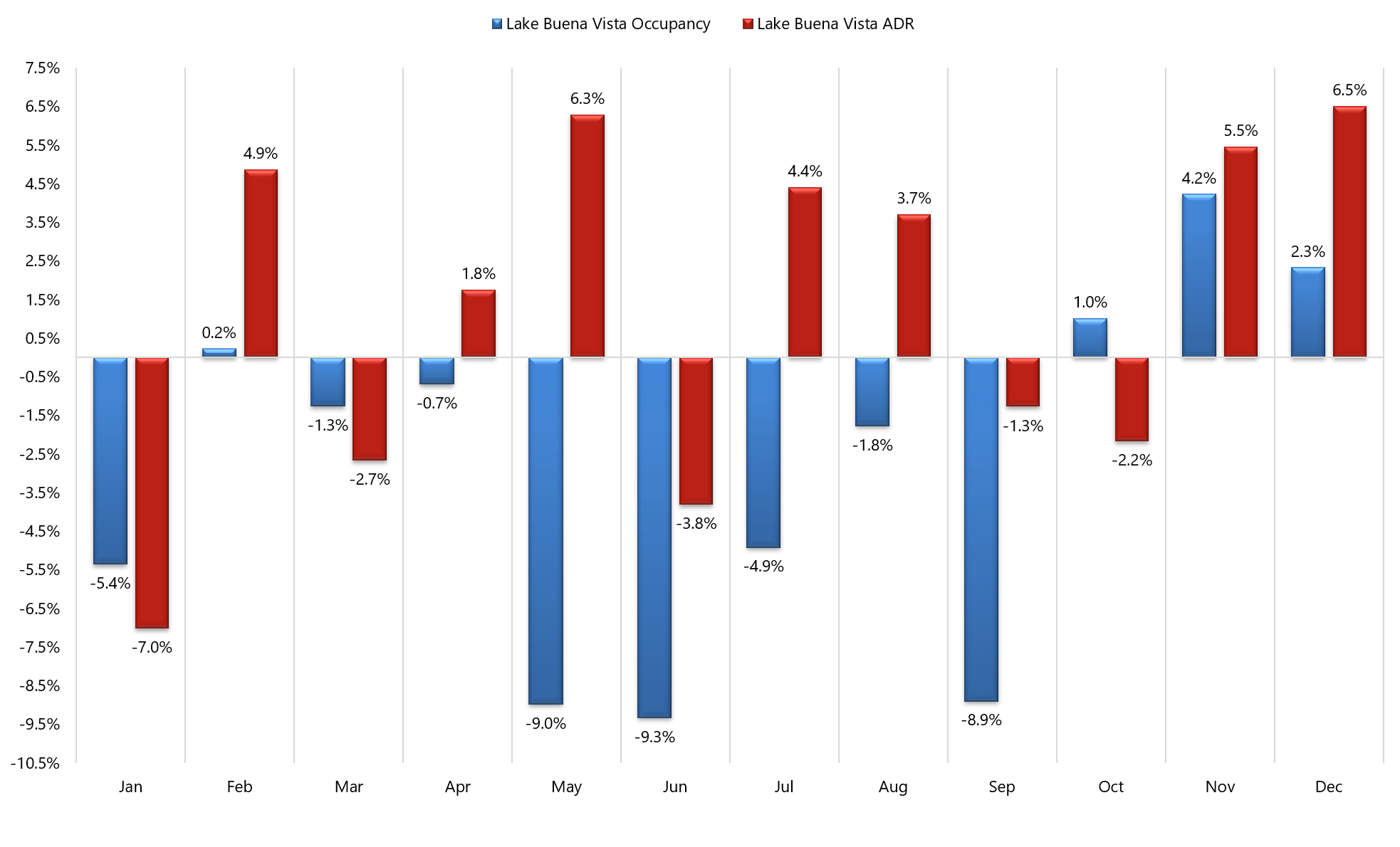 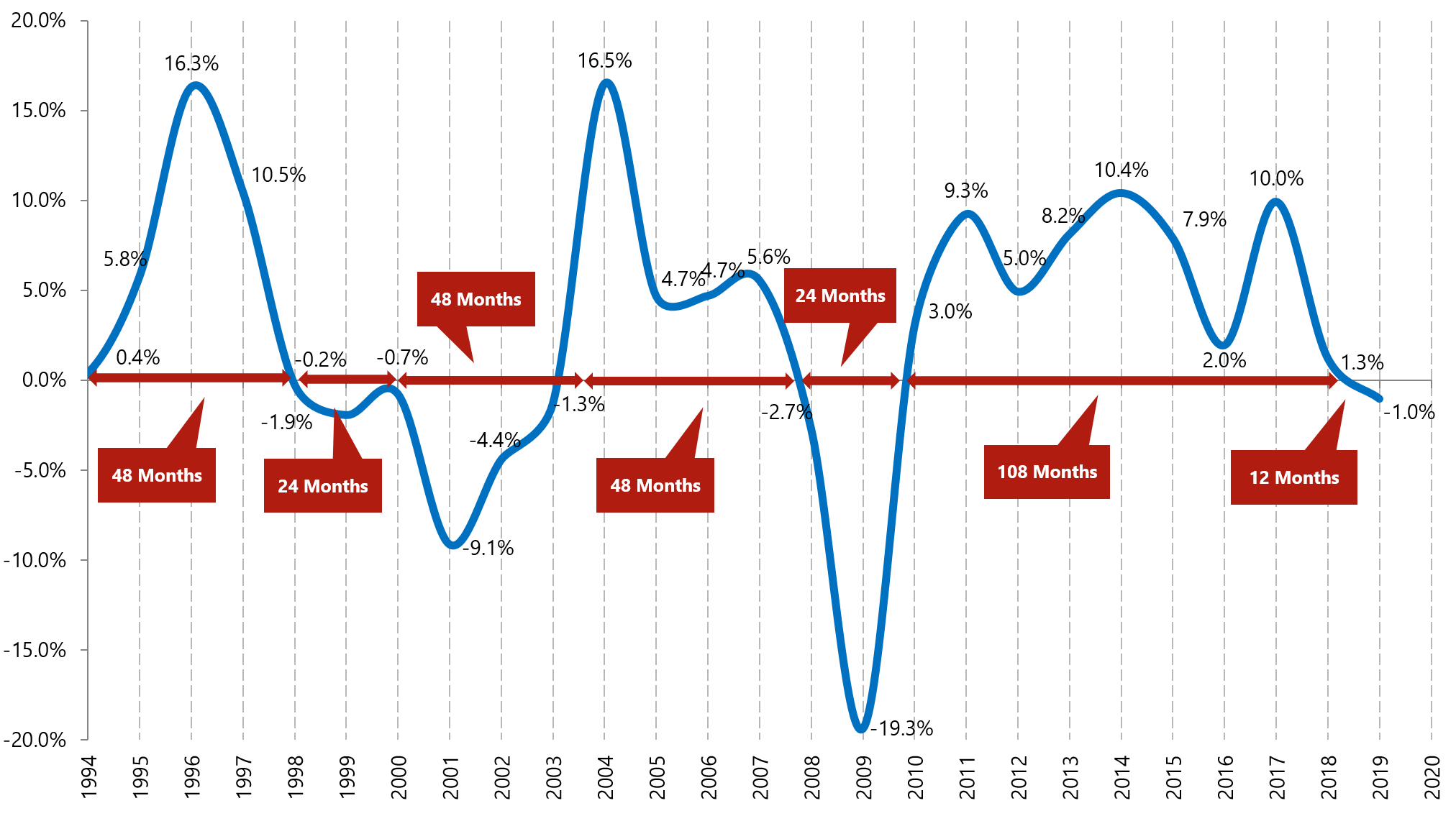 RevPAR is forecast to moderate in 2020, with ADR gains owing to aggressive yield-management strategies amid steady growth in room-night demand levels but tempered by new hotel supply entering the Metro Orlando market.
Economic growth throughout Metro Orlando, ongoing expansions at the Orlando International Airport, transit-oriented development, and new adventures at area resorts and attractions should support future demand growth.
The one “wild card” in the forecast that could have an impact on RevPAR in 2020 is the anticipated ADR growth and the degree to which revenue managers will be able to leverage room price levels.

Orlando has long been distinguished as an iconic vacation destination by continuing its ranking as the No. 1 destination in the United States, according to Visit Florida. Since 2013, Orlando has reigned as the nation’s “Most Visited Tourist Destination.” With multiple factors driving Orlando’s appeal, hotel investors and developers are curious as to what is on the horizon for the hospitality market in Central Florida. %%ViewCount%% Views 1 Comments
Share:
Subscribe To Newsletter