Traditional hotel development in ski resort towns has slowed nearly to a halt, with barriers like limited land and high costs putting pressure on new builds. But hotel demand and performance are on the rise and the “barriers” may not be so imposing.

In ski resort towns across the U.S. and Canada, a large and growing number of people are hitting the slopes. In the 2015/16 ski season alone, total skier visits approached 64 million, an increase of about 1.9 million skiers from the previous season. The most recent performance is still about 3.6 million skier visits lower than the peak season of 2010/11, showing that the industry has room for even more growth.

Yet despite the climbing numbers and the continued potential for growth, few ski resorts have realized an increase in their bed base. The limited supply increases have come in the form of fractions or timeshares, not traditional hotels.

There are many reasons why, but most revolve around the dynamics of the for-sale residential vacation/second-home and shared-ownership markets, where investments are often seen as offering higher returns and/or being less risky than traditional hotels. These segments, however, have been relatively inactive since the recession.

U.S. hotel growth has been charging forward for the past five years. Moreover, hotels in ski towns have been outperforming the average over the same period, with continued growth in occupancy and average rate. Despite these strong performance indicators, hotel development activity in ski resort towns is nowhere close to the pipelines of development in other U.S. markets.

Are such hotel developments too costly? Do limited land sites and government regulations diminish interest from developers? We examine some of the factors behind the shortage of ski resort hotel development and ways developers can overcome them.

Hotel stakeholders tend to consider two criteria to gauge the potential for new development: supply and demand. Right now, proposed hotel supply in most North American ski markets registers in the range of little to none. At the same time, demand, as evidenced by skier visits and the performance of existing hotels, is gaining strength.

Again, these dynamics point to the potential for additional growth, with skier visits rising but still below the historical peak achieved in 2010/11. Hence, lodging demand should also be on the rise. Nevertheless, new hotel development in ski resort markets lags behind the trends.

Many hotel developers and operators see ski markets as predominantly seasonal, with only a few months of the year in which to reap revenues. However, while the markets do have seasonal patterns, the degree of seasonality has softened in past years. 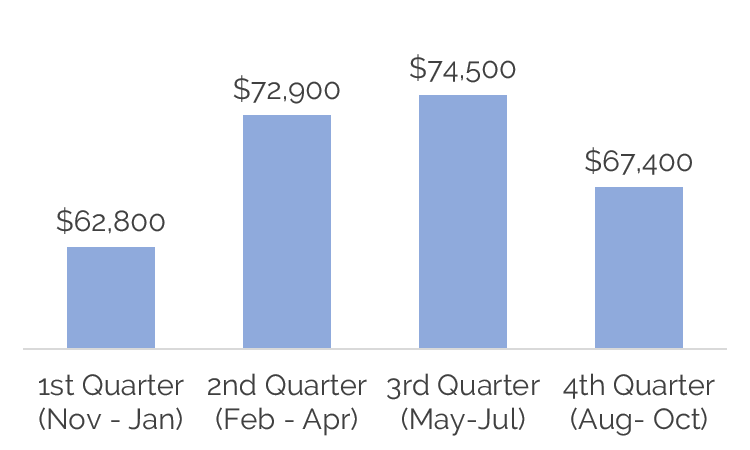 As seasonality becomes less of a burden, hotel operators are better able to control costs and maximize net incomes, which should make the prospects of hotel development in these markets more attractive.

It’s possible that the lack of interest in hotel development in ski mountain communities stems from a perceived notion that the hotels located in these markets have not seen the strong growth in performance exhibited in many markets around the United States. But this view is inaccurate.

Occupancy has been trending upward—nearly ten points over the past five years—as ski resorts offer more activities in the non-winter season, including adventure parks and mountain bike trails. Average rate among the above composite of ski resort hotels has also increased at a moderate pace, resulting in overall annual RevPAR growth on the verge of 7.5% since the 2011/12 season.

Many of the hotels located in ski markets are considered upper-midscale or higher. As of October 2016, the upper-midscale and upscale segments composed about 65% of total hotel development in the U.S.2 ; however, few of the proposed hotels belonging to these segments are planned for resort markets. It is more fitting to compare the performance of the 20 ski markets analyzed above against that of the overall upper-upscale hotel segment. 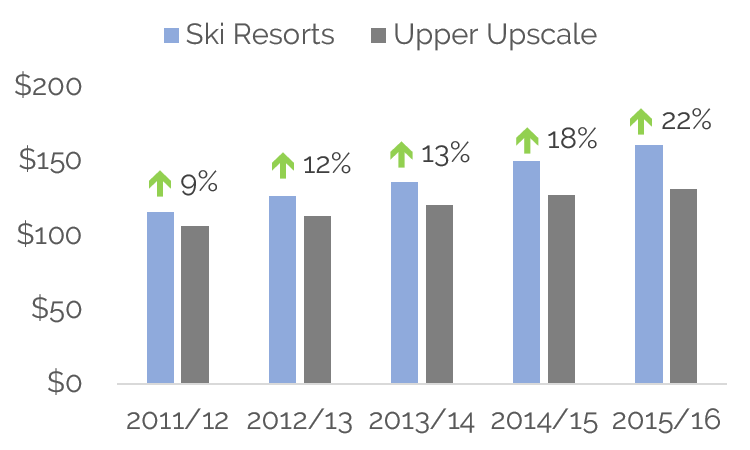 The upper-upscale segment includes hotel brands such as Renaissance, Hyatt, Marriott’s Autograph Collection, and Ace Hotels. This level of hotel is comparable to the condo-hotels found throughout most U.S. ski markets. The difference comes in potential revenues. When a developer builds an upper-upscale hotel in an urban market, it does not sell off the units and split the revenues, which is the norm model for real estate investment and operation in ski resort markets.

However, the vacation/second-home market remains depressed, resulting in a lack of new construction of this asset type and thereby competition with the upper-upscale hotel segment. Moreover, existing ski hotels’ average RevPAR performance is outpacing the upper-upscale segment nationwide, making the development of new, traditional hotels (versus condos) a viable option.

Despite the positive trends and figures, certain barriers to hotel development in ski resort markets continue to keep developers at a distance. These include lack of suitable land, seasonality, government regulations, and higher construction costs.

The high cost and the limited availability of land are typically seen as the first barriers for development in ski resort markets. Land costs start at around $25 per square foot and shoot up astronomically in high-demand markets like Aspen, Vail, and Breckenridge.

Full-service, resort-type, slope-side hotels realize the highest development costs. Developers of select-service, upper-midscale hotels can choose a site farther from the slope, thus achieving far lower development costs. Furthermore, several recent ski-market hotel projects completed by HVS have included the redevelopment of older commercial buildings or the conversion of aging motels. Redevelopment can require a change in zoning for higher density; however, for this additional expense, developers may be able to secure a site closer to town or the slopes.

Additionally, several smaller, partially developed parcels can be purchased, rezoned, and platted to become one parcel, presenting another opportunity for a developer to acquire the land needed for hotel development. While this may sound daunting, many mountain communities with ski resorts are looking for new development opportunities as a way to increase the tax basis; they therefore have incentives to work with developers with a track record of successful hotel projects. Hence, when it comes to hotel development in ski markets, there are several ways over or around the land hurdle.

Many ski resort towns lack an adequate amount of affordable housing, which has led local governments to impose some requirements for low-income or employee housing on proposed developments. The number of units required in a given building ranges significantly based on local regulations and building size.

Parking regulations are another potential hurdle. Parking is scarce in most ski towns, and new developments must account for parking for employees and guests. Often, due to site constraints, this results in the need for structural parking, which can significantly increase the cost of a project.

Fortunately, developers can achieve greater efficiency in the implementation of these regulations by negotiating with local government agencies. Furthermore, developers can use these requirements as potential income streams. Certain rooms of a hotel, for instance, can be designated as employee housing and rented to workers, and parking structures can be funded through public/private development and paid parking services.

Overall, developers tend to view construction costs as the most significant barrier to entry in ski resort markets. Without question, these locales go hand-in-hand with high premiums for development. But a closer look at the numbers shows how the construction cost hurdle can be overcome.

A review of construction budget figures for proposed ski-market hotels, derived from HVS market studies, feasibility studies, and appraisals, shows that costs range from around 23% to 45% higher than the published prototype for hotels from various brands. The highest premiums correspond to select-service properties; the premium range grows less imposing for hotels higher up the segment ladder.

The following is a sample construction budget, including land, for select-service, upper-upscale, and luxury hotel products in resort towns. For the purpose of this analysis, we assumed a land cost of $35 per square foot and a construction premium of 35% over the published costs of similar hotels from Marriott and Hilton. 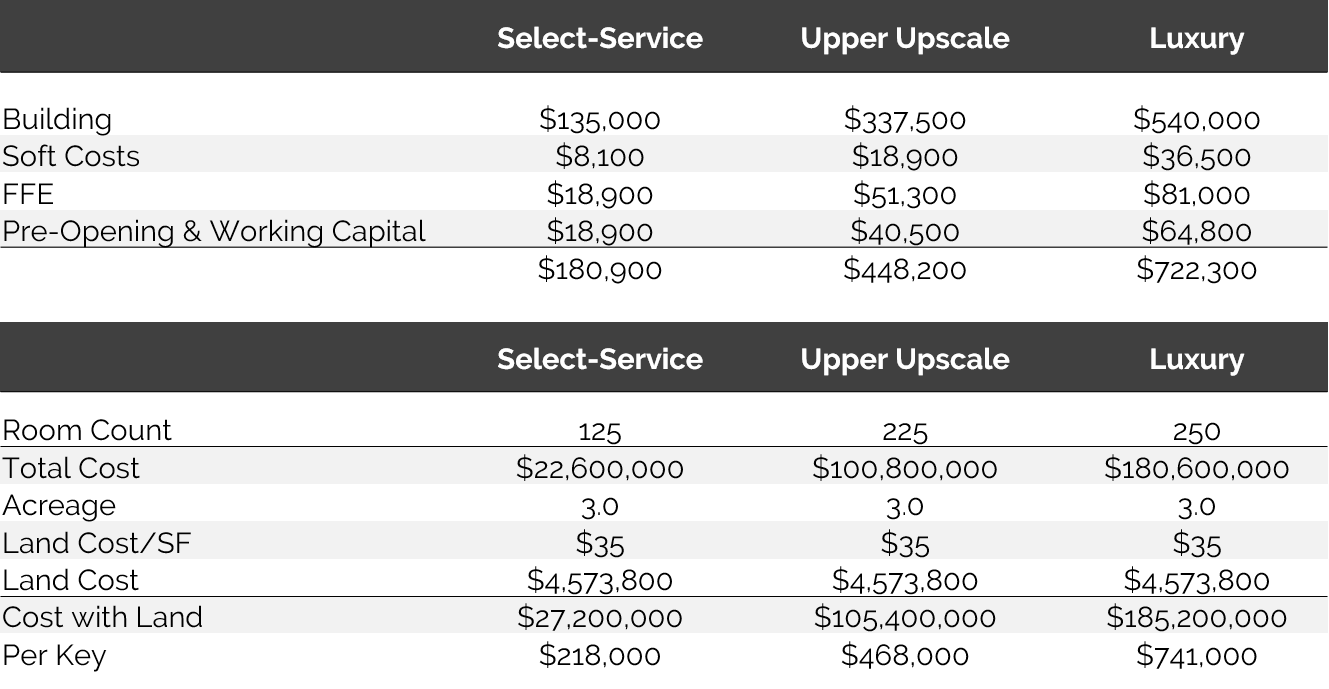 Sales of hotels in ski resort markets are relatively infrequent; as such, there is a limited amount of data on these transactions. However, sales in Vail, Colorado in 2016 included the former Holiday Inn for a price per key of $222,000 and the Four Seasons (which includes fractional condo units) for $903,000 per key. At the least, these sales suggest new hotel development could be feasible, despite the higher construction costs.

New hotels offer another, less tangible advantage: appeal. A vast portion of any ski market’s lodging landscape is composed of condo-hotels built decades ago; thus, any new hotel is a standout for a wide range of guests. Also, the range of hotel brands available in these markets should appeal to developers. Newer lifestyle brands like Marriott’s Autograph Collection and Canopy by Hilton present potentially ideal fits in ski towns, where the incorporation of local flair and a solid brand-loyalty program proves very attractive. While new supply pipelines amass hotel projects in non-resort markets, developers should at least investigate the potential for projects in ski markets, which may provide an untapped opportunity.

1 Derived from data provided by the National Ski Areas Association’s (NSAA) Kottke National End of Season Survey, in addition to data from Vail Resorts, which does not report to NSAA.
2 STR
3 Examples based on hypothetical properties.

A Senior Vice President with HVS Denver and HVS Director of Business Development, Brett Russell’s 15-year career in hospitality encompasses hotel operations, management, development, and consulting. Brett has overseen hundreds of appraisals, market studies, and feasibility studies for hotels, lodges, and resorts throughout the Americas, with a focus on Colorado full-service hotels and resorts. Contact Brett at 720-877-1376 or [email protected].

Traditional hotel development in ski resort towns has slowed nearly to a halt, with barriers like limited land and high costs putting pressure on new builds. But hotel demand and performance are on the rise and the “barriers” may not be so imposing. %%ViewCount%% Views Comments
Share:
Subscribe To Newsletter