Nearly 300 stakeholders in hospitality markets across the Caribbean came together in San Juan for HVS’s 6th annual regional hotel conference. What are the latest revelations for the region’s hospitality industry? 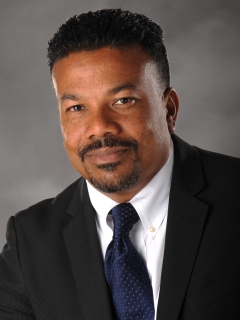 While the Zika virus has affected the region’s hotel performance in 2016, it appears that the worst is behind us.

Media coverage and perceptions of the mosquito-borne Zika virus have negatively affected the Caribbean hotel market in 2016, causing reduced travel and cancelations, particularly with groups and wedding business. The Caribbean was the only resort destination (out of a sample of seven) to experience RevPAR decline year-to-date 2016 (through September); however, it

remained the second highest in overall RevPAR, nearly $40 below Hawaii but surpassing Cancun, Mauritius, and Florida, among other markets.

HVS Managing Director and CHICOS Chairman Parris Jordan noted that the RevPAR decline so far this year follows six consecutive years of RevPAR growth in the Caribbean. According to Mr. Jordan, hotel demand was down -0.6% year-to-date through September, with RevPAR down -2.7%. Data, however, show month-over-month increases in demand since June and rising total revenues since July. Given this trend, Mr. Jordan noted that demand should turn out flat or register moderate gains by the end of the year. Furthermore, concerns over the virus are beginning to shift to markets in the U.S.

The following chart shows RevPAR dynamics in the Caribbean since 2007.

The development pipeline has become notably more active, with the most development activity now since prior to the recession of 2008/09.

Following the Global Economic Crisis, the Caribbean experienced an astonishing four consecutive years of declining supply levels, from 2009 through 2012. Supply growth did not gain traction until 2014; however, now, more hotel development is underway across the Caribbean than at any time since the peak in 2007. More than 50 proposed projects, under construction or in the planning stages, span nearly 10,800 new rooms. The largest of these is the 2,000-room Celebration Jamaica, a proposed resort and casino development to be built in Montego Bay.

Not surprisingly, some of the region’s most populous island nations, the Dominican Republic, Jamaica, and Cuba, dominate the 2016 development pipeline. The Dominican Republic is the current Caribbean leader in terms of RevPAR growth for 2016, further fueling its investment potential.

The following chart shows the course of supply change in the Caribbean since 2007.

Source: STR
Beyond a sheer rise in the volume of hotel developments, hotel designs in the region are becoming more contemporary, an evolution that follows consumer trends and demands. Luxury and non-luxury hotels alike are increasingly catering to the “experiential” traveler (i.e., those that want to connect with the local culture and truly “experience” all that a destination has to offer, be it adventure, food, music, history, architecture, or the environment).

Creative financing is key for the Caribbean, though conventional financing availability is improving for “A” projects with solid borrower profiles in strong markets.

The availability of financing has long been a challenge in the Caribbean. However, the strong development pipeline is an indicator that financing is becoming increasingly accessible, and several positive themes are taking place. Underwriting for hotel development has become more disciplined, and sources of institutional capital are recognizing the attractiveness of the Caribbean. As such, new equity and debt providers are participating in Caribbean hotel investment. Additionally, the marketability of portfolio deals in the region has broadened, attracting investors; development has shifted from conversions to new-build projects; and product design is evolving.

Financing is available for projects that contain the following criteria:

Other important aspects that sponsors need to consider include the following: 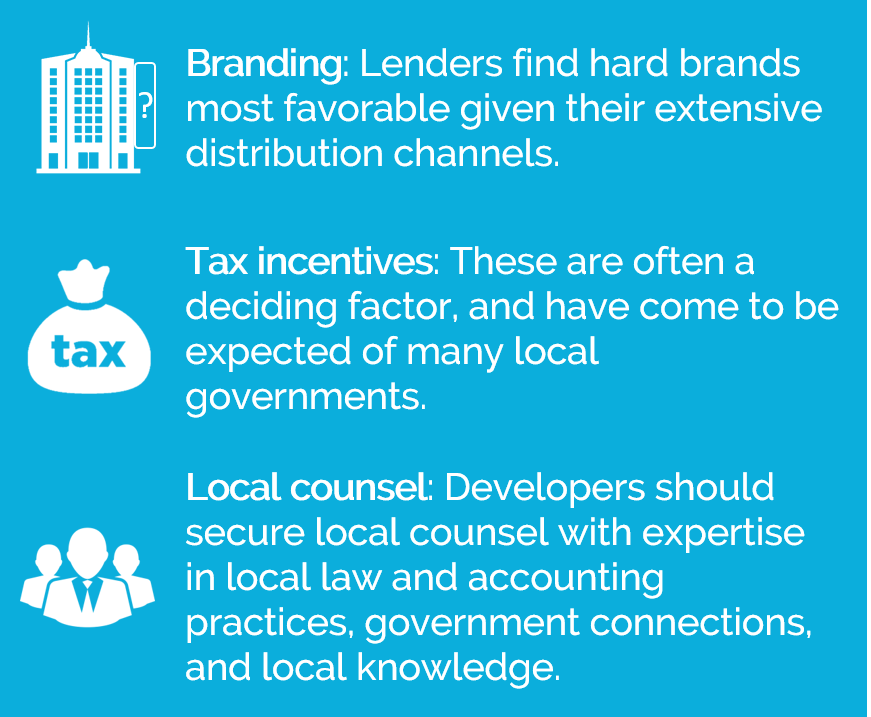 Panelists on the “Financiers Outlook” session noted varying degrees of confidence in the Caribbean over the last year. David Kosoy of Sterling Global Financial Limited and Adam Rosenberg of Fortress Investment Group agreed that, since the recession of 2008/09, Canadian banks have not had so strong an appetite for projects in the Caribbean. However, the region will continue to benefit from the increasing political sensitivities in countries such as the UK and the U.S., which have more recently created an influx of foreign capital.

The Caribbean financing landscape and underwriting parameters are differentiated from the U.S. by some key investment criteria.

With CHICOS occurring on the heels of the November 8th U.S. presidential election, the sensitive topic was discussed more during networking periods than collectively during sessions. Nevertheless, panelists offered some insights from the stage.

Speakers at the “Hospitality Leaders Outlook” session expressed a range of positive to neutral feelings regarding the Trump victory. The consensus ran that a Trump administration will be good for cash flow, with fewer restrictions and less regulation-constraining business, and that financial bailouts 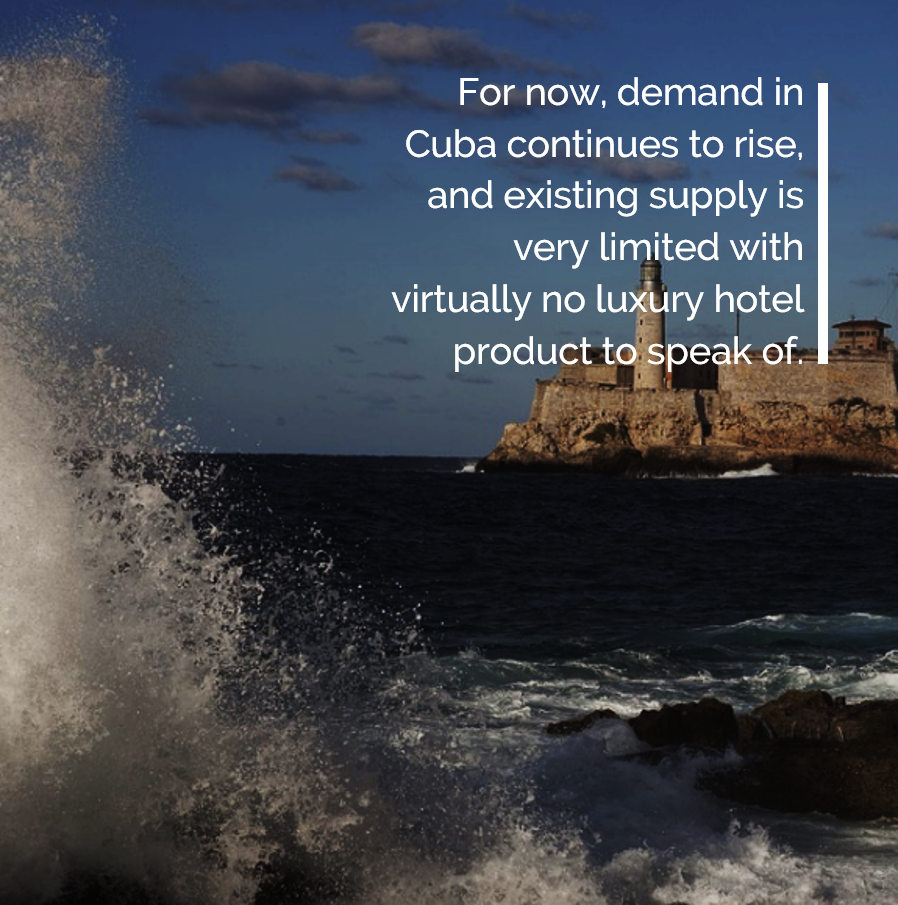 and debt rescue will be less likely to occur going forward.

Clear development opportunity exists in Cuba; however, given that ownership structures must involve the Cuban government, many investors are hesitant and waiting to see how conditions progress in due time.

Cuba was referenced throughout the conference, and a dedicated panel on the country concluded the event’s sessions with an in-depth discussion of development and investment opportunities on the island. Arturo Garcia Rosa, President and Founder of South American Hotel & Tourism Investment Conference (SAHIC), put it simply: “If you want to do business in Cuba, it’s easy. They are waiting for you.”

With knowledge on where and what type of hotels they want, the Cuban government is asking for hotel proposals; however, U.S. developers are hesitant because hotel development involves partnering with the Communist government, which retains ownership of the land. Only time will tell how ownership structures will work. For now, demand in Cuba continues to rise, and existing supply is very limited with virtually no luxury hotel product to speak of.

Market factors such as the return of demand following a Zika-induced glut, the increase in development projects, and the potential entryway to Cuban hotel development mark the Caribbean as a region rich in opportunities for hotel investors, developers, and brands. CHICOS delegates were cautious but optimistic about the region’s prospects over the long-term, and interested stakeholders would do well to investigate where and how to make the most of their investments in the region.

Nearly 300 stakeholders in hospitality markets across the Caribbean came together in San Juan for HVS’s 6th annual regional hotel conference. What are the latest revelations for the region’s hospitality industry? %%ViewCount%% Views Comments
Share:
Subscribe To Newsletter