A multitude of major industries consistently generates demand for hotels in Dallas, where unemployment is falling and economic output is picking up. This article looks at developments and dynamics across Dallas’s hotel submarkets.

Dallas, Texas has exhibited remarkable fortitude in the years since the recent recession. With a highly diverse economic structure led by the technology sector, the city is the leading commercial, marketing, and industrial center of the south-central U.S. Dallas’s major industries include defense, financial services, information technology and data, life sciences, telecommunications, tourism, and transportation, all of which play a major role in generating demand for Dallas hotels. 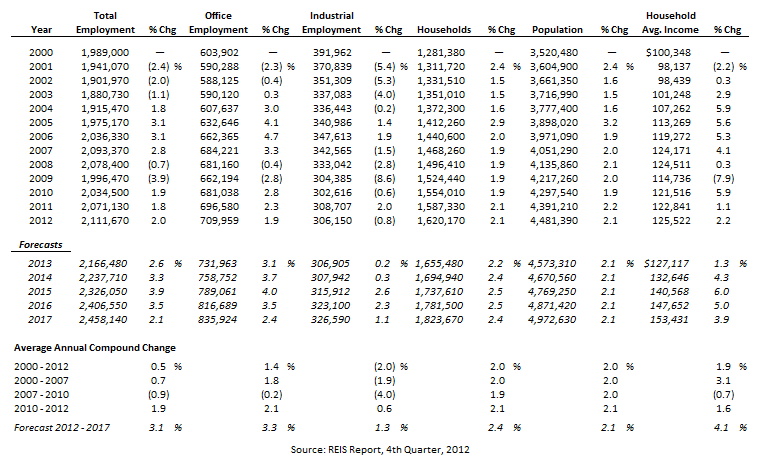 Approximately 50% of jobs in the Dallas/Fort Worth Metroplex are service-oriented, belonging to such fields as healthcare, recreation and tourism, and financing. The Dallas area’s workforce grew by 40,540 between 2011 and 2012, a 2.0% increase from the prior year and the third consecutive year of growth following the economic recession of 2009. The area’s population has realized consistent growth for more than a decade, a trend that is projected to extend through 2017.

The following table presents unemployment statistics for Dallas County, the Dallas/Fort Worth MSA, the state of Texas, and the U.S. from 2003 through 2012. 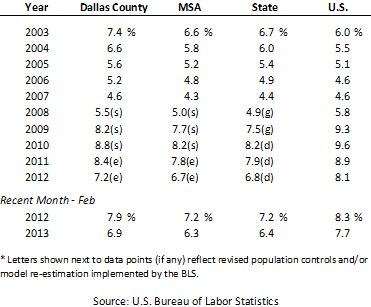 Unemployment in Dallas rose to its highest level in ten years in 2010, a result of job losses brought on by the national recession. Unemployment fell slightly in 2011 and again, more definitively, in 2012. The most recent comparative period illustrates further improvement. Local economic development officials noted that hiring has resumed within the financial sector, and corporate relocations to the area are expected to fuel employment growth over the long term. Interviews with economic development officials reflect a positive outlook for Dallas, primarily attributed to the diversity of corporate activity concentrated in the area.

Dallas, along with neighboring Fort Worth, has one of the largest concentrations of corporate headquarters in the U.S., which has helped the market strengthen and expand since the recession. According to a report published by Forbes in 2013, Dallas has realized the third-fastest rate of growth of any U.S. city in terms of population and economic output. Dallas is also one of a handful of cities that have recouped all recession-driven job losses. The area’s vast transportation network includes highways, commuter-rail service, a light-rail line, and two major airports.

Several large suburbs act as major economic drivers for the Dallas market. Fundamentals and new developments in these suburban areas are summarized as follows:

The Dallas market continues to attract global corporations, and the area’s combination of business anchors, telecommunications industry growth, and tourism has allowed the Metroplex to recover more quickly than most major markets. 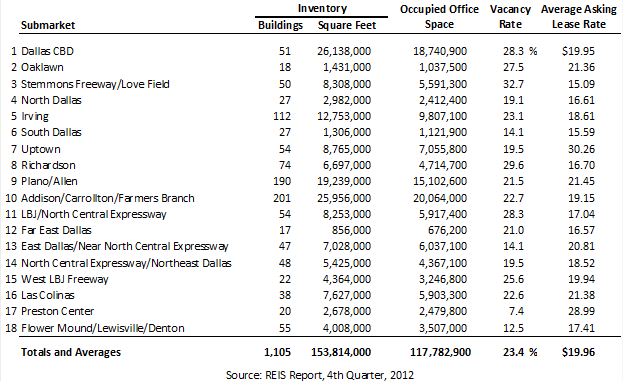 Despite an upswing on several economic fronts, recovery for Dallas’s office market has been slower, primarily because of oversupply. The CBD market has weakened in recent years as other submarkets, particularly Frisco/Plano and nearby Uptown, have gained popularity.

The following table illustrates a trend of office space statistics for the overall Dallas market. 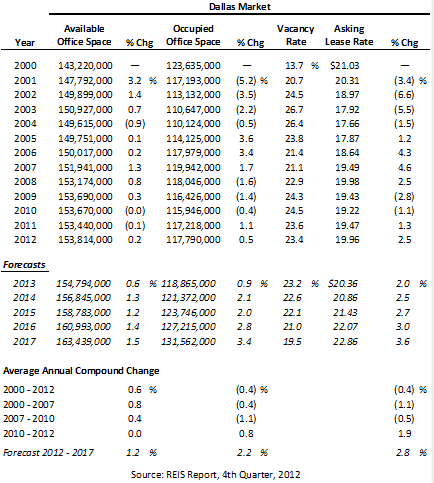 Vacancies remain relatively high across the market, though vacancy levels are forecast to drop moderately through 2017. Asking lease rates are likewise expected to realize modest gains over the next several years. Notably, a $100-million redevelopment of Patriot Tower in the Dallas CBD submarket is underway, which could help shift the dynamics of Dallas’s office market in the coming years.

Hotel Construction Update
Prior to the onset of the Great Recession, the economic boom spurred significant hotel construction in Dallas. The following charts depict the new supply additions realized in the Dallas market from 2007 through 2012. 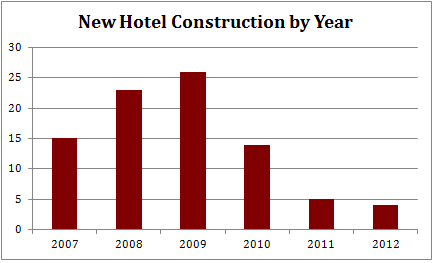 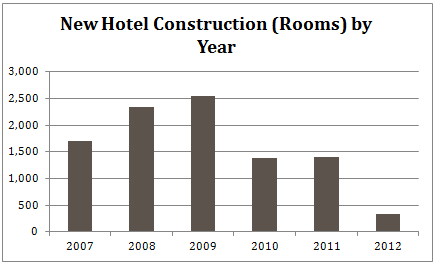 Four hotels opened in 2008, including the 231-room Hilton in Rockwall and the Aloft hotels in Las Colinas, Plano, and Frisco. In 2009, the 200-unit NYLO Hotel Dallas opened in Las Colinas. The opening of the Element Dallas-Fort Worth Airport North in 2009 represented the first property for this brand in the Metroplex. The Courtyard Dallas Allen at The John Q. Hammons Center added 228 rooms to the growing Allen market in 2010. Five hotels opened in 2011, including the 1,001-unit Omni Dallas Convention Center Hotel. Another four opened in 2012, including the market’s first Home2 Suites by Hilton in Frisco and the 76-room NYLO Hotel Dallas Southside. Overall, the most popular brands among new builds from 2007 to 2012 were La Quinta Inns & Suites (twelve hotels), Holiday Inn Express/Holiday Inn Express & Suites (eleven hotels), and Comfort Inn/Comfort Inn & Suites/Comfort Suites (ten hotels).

According to HVS research, one new hotel is currently under construction in the Dallas market:

Proposed hotel projects include the following:

Outlook on Market Occupancy and Average Rate
The recession caused occupancy levels in Dallas to drop considerably. The area experienced cutbacks in employment and corporate travel in 2008 and 2009, although to a lesser extent than in other major metropolitan areas in the country. The overall strength of the local economy allowed occupancy to rebound in 2010. The pace of the recovery accelerated in 2011 and 2012, and occupancy strengthened further to just over 61%. In addition to expanded activity occurring at large telecommunication firms, energy companies, and banks, area medical centers continue to grow and increase room-night demand. As such, demand in Dallas has grown faster than the national average.

The recovery of the Dallas market is attributed to a rebound in corporate demand, an expanded convention market, and the overall economic strength of the Metroplex. Occupancy is expected to grow at a moderate pace as the city attracts more citywide events and discretionary spending increases; greater demand will also allow hoteliers to focus on growing average rates.

Recent Hotel Transactions
Hotel transactions that have occurred in the state since January of 2011 are summarized in the following table; the transactions within the Dallas/Fort Worth Metroplex are highlighted. 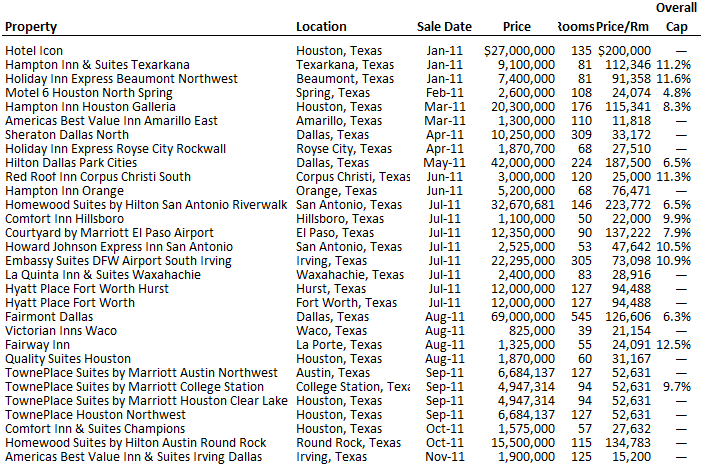 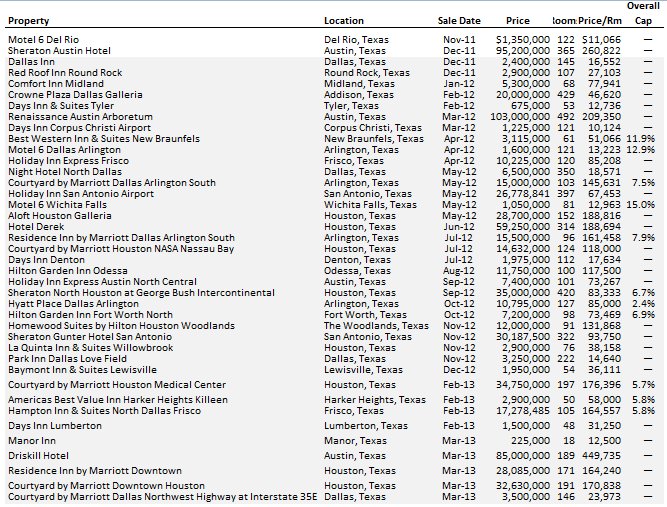 The summary of hotel transactions illustrates a steady pace of deals during the last few years, across a variety of market segments and acquisition opportunities. The sales represent acquisitions of stabilized assets by institutional investors, as well as repositioning opportunities for entrepreneurial owner-operators.

Brokers’ Outlook
According to interviews with hotel brokers active in the Dallas/Fort Worth Metroplex, hotel transaction volume is likely to increase in 2013, albeit at a gradual pace. Transaction demand was centered on strongly flagged hotels throughout the first quarter of 2013. While the number of REIT purchases has slowed, many individual buyers are looking to purchase assets at a price that allows them to take advantage of future growth in the market. Owners also want to take advantage of the upswing in revenues and must decide on the right time to sell. According to several brokers, most potential buyers still struggle in finding a willing lender and closing a deal that satisfies both the buyer and the seller. As the banking sector continues to strengthen within the Metroplex and region, lending opportunities should continue to improve and the bid/ask gap should narrow. The emphasis on new development seems to be focused on mixed-use properties that feature retail, office, and apartment/condo living.

Conclusion
The Dallas market has proven fairly resilient in the face of economic challenges, its strength achieved largely on the foundation of its diverse economy. The city is experiencing revitalization efforts and new construction projects, including the entrance of new medical facilities, and convention activity is forecast to ramp up in the coming years. As such, the overall outlook for Dallas’s lodging industry remains positive.

Kathleen Donahue is the Senior Managing Director and Practice Leader overseeing the West South Central region of the U.S. Kathleen joined HVS from Radisson operations in Austin, following graduation from The University of Texas at Austin. She is licensed as a certified general appraiser in Texas and surrounding states and has particularly strong knowledge of hotel markets in Texas, Oklahoma, Arkansas, and Louisiana. Contact Kathleen at +1 (972) 890-3548 or [email protected]. 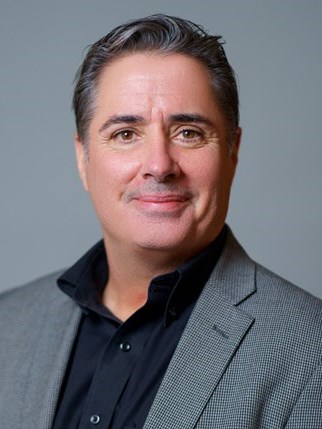 Russ Rivard, MAI, a Managing Director and Partner with the HVS Dallas office, oversees site inspections, analyses, and valuations of hotels throughout the South Central U.S., with a special emphasis on limited- and select-service properties and portfolios. Russ earned his master's degree in Operational Management from the University of Arkansas. He is a certified general appraiser in Texas and surrounding states. Contact Russ at (214) 766-5394 or [email protected].

A multitude of major industries consistently generates demand for hotels in Dallas, where unemployment is falling and economic output is picking up. This article looks at developments and dynamics across Dallas’s hotel submarkets. %%ViewCount%% Views 5 Comments
Share:
Subscribe To Newsletter