Billions of barrels of unextracted oil have drawn masses of companies, crews, and support personnel to parts of Montana and North Dakota. The boom could last for decades, prompting the need for new hotels.

Domestic oil and natural gas exploration and excavation have ventured from Texas, California, and Alaska into untraditional territories over the past two decades. A century of U.S. prospecting has shown that cities, businesses, and an economic infrastructure tend to develop and expand where these valuable energy resources well up in large volume. Western North Dakota and eastern Montana have become the latest hotspots for U.S. oil and gas, and varying accounts predict the boom could continue over the next ten to twenty years. The following article examines the potential impact on the region’s overall economy and prospects for local hotels.

The 200,000-square-mile Bakken Formation underlies parts of western North Dakota, eastern Montana, and southern Saskatchewan, as shown below. i 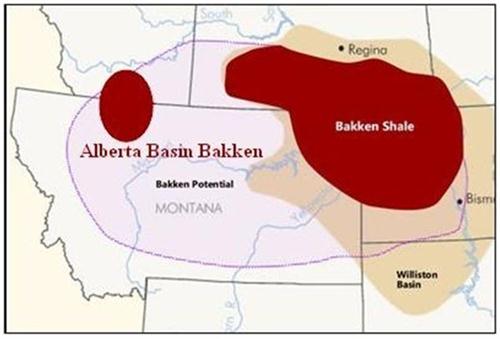 First discovered in 1951, the formation’s oil has proven difficult to extract, but new rock-fracturing technology, introduced in 2008, has brought a boom in production. Oil production has been at just over 600,000 barrels per day—approximately 10% of all U.S. oil production—since the spring of 2012, making North Dakota second only to Texas in oil production in the U.S.ii

The following chart illustrates the increase in oil production in North Dakota from 2005 to May of 2012.iii 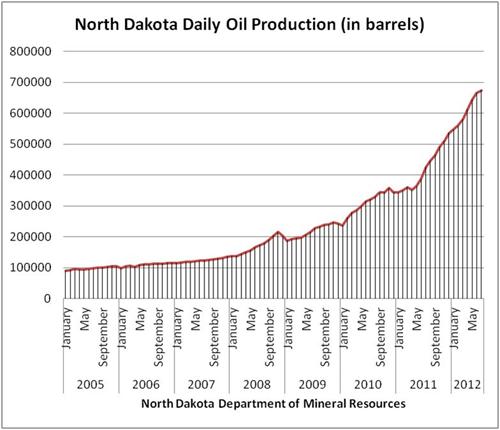 Oil exploration and extraction across the Bakken Formation has driven waves of oil and gas workers, caravans of trucks and heavy machinery, and hundreds of millions of investment dollars into this relatively isolated area of the country. A 2008 U.S. Geological Survey report estimated that 3 to 4.3 billion barrels of “technically recoverable oil” exist in the Bakken Formation; some experts even argue that this figure is low.iv Activity excited by this vast amount of oil could turn the gears of the region’s economic machinery for the next decade, or even longer.

The Employment and Population Boom

With the swell in oil production and energy companies’ advance into western North Dakota and eastern Montana, employment is in very good health. The U.S. Bureau of Labor Statistics reports that North Dakota’s unemployment has remained below 5% since 1987. In the oil-producing counties of Stark and Williams, unemployment in June of 2012 was at 1.8% and 0.9%, respectively. In Richland County Montana, unemployment stood at 2.9% in 2011 and 3.3% in June of 2012. Local officials have reported trouble finding qualified workers to fill the abundance of jobs. Companies and state associations have reported hosting job fairs in neighboring states, attempting to attract new workers to the area to keep up with demand, a situation that stands in stark contrast with overall unemployment and economic conditions in the U.S.

Explosive population growth is also driving investments in the oil-producing areas of North Dakota and Montana. Williams County’s population grew by 8.8% from April of 2010 to June of 2011—approximately ten times the average rate of growth across the nation for the same period. v  This population boom has created unprecedented demand for new roads, water-treatment facilities, sewage lines, schools, and housing. Hotels in Williston, Dickinson, Minot, and Sidney are booked months in advance; apartment complexes are at capacity; and RV parks and company-sponsored “man camps” are springing up outside of busy towns. Williston permitted over 1,300 new housing units in 2011, and Minot added 1,132 units, an 80% increase from the prior year. vi  In Sidney, seven new subdivisions totaling 324 new single- and multi-family units were underway in 2012.vii  Still, the amount of available infrastructure and developable land does not measure up to the high demand from out-of-state contractors.

While these cities struggle to keep pace with the need for housing and services, hotels in these markets are profiting. Blocks of construction and energy workers fill area hotels for months at a time, finding hotel accommodations better suited than apartments given these workers’ semi-permanent stations in the region. Statewide, taxable sales and purchases in the Accommodation and Food Services sector have skyrocketed since 2010, with double-digit percentage increases in 2011 and year-to-date 2012, as illustrated in the chart below. viii 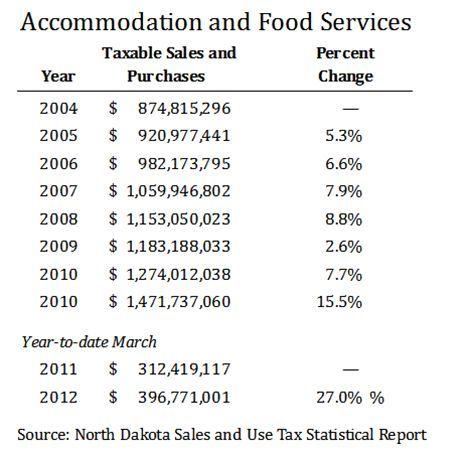 The city of Minot, North Dakota, illustrates some of the opportunities the region’s oil boom has brought to local hotels; recent developments also presage some of the cautions potential hoteliers need to keep in mind. Slightly east of the major drilling sites, Minot has realized a flurry of hotel construction over the last two years; seven of the market’s 21 hotels have opened since the start of 2011, including the Baymont Inn & Suites, which opened in September of 2012. Most of the city’s hotels had been clustered around the Dakota Square Mall, but newer construction has created a hotel corridor that includes the Holiday Inn Express, Souris Valley Suites, Staybridge Suites, My Place, and Candlewood Suites hotels, all on the city’s south side. A Microtel and an Astoria hotel are under construction in the same area. Managers at these newly opened hotels revealed that within a week of opening their doors, virtually every room had been filled. The following chart shows hotel construction activity and room counts in Minot. 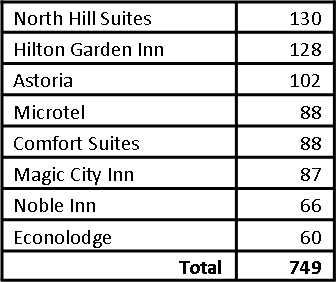 Of the eight hotels currently under construction, many are expected to open before the spring of 2013. In addition, a 70-room extended-stay hotel is expected to be built near the Hilton Garden Inn in the new Southgate Addition, a $109-million development in south Minot that broke ground in August of 2012 and will feature approximately 371 apartments, two hotels, and a large retail center.ix

The neighboring cities of Williston, North Dakota and Sidney, Montana, are also experiencing considerable new hotel construction. More than half of Sidney’s 381 hotel rooms have opened since April of 2012. Williston is home to 1,294 hotel rooms, with another 413 under construction, as shown in the chart below.

In 2012, the Hampton Inn & Suites, two Value Places, and a Holiday Inn Express Hotel & Suites have opened, totaling 434 hotel rooms. These new rooms add to the 225 that opened across the HomeStay Suites, Motel 6, and Microtel Inn & Suites last year.

A flood swept through Minot in the summer of 2011, causing major damage to properties in roughly 20% of the town. The environmental disaster steered development efforts from new builds to re-builds of properties hit by the rising Souris River. This placed even more strain on housing and lodging supply, with displaced residents and disaster relief workers vying with construction and energy workers for hotel rooms. Minot’s run of 90% to 100% occupancy, however, has subsided in recent months, as people displaced by the flood move back into permanent housing. More apartment complexes on the rise will strain further demand from local hotels in the coming years, and there is the strong possibility that new, unbranded extended-stay hotels will eventually be converted to apartments. Furthermore, as housing developments reach completion and people change from temporary residence in a hotel to permanent residence in a home, that source of demand will weaken. This of course depends on the strength and duration of the oil boom, as various political, economic, and geologic conditions prevail in the approaching years.

Demand for lodging was so extreme in early 2012 that the new La Quinta Inn & Suites Minot, located on the city’s southwestern edge, opened before there was even a road to reach it, with cars, trucks, and buses passing over a field of grass and brush to arrive at the property’s paved shores. Beyond such anecdotal evidence of the need for new hotel rooms in cities across the Bakken shale, there is no shortage of hard data to document the population, employment, and economic growth throughout the region. Hoteliers, investors, and developers need to proceed with caution, as rampant construction of new hotels and rooms may end up serving only a short-lived need, should economic conditions experience another downturn or drilling restrictions inhibit growth. Nevertheless, the region is ripe for well-advised, carefully calculated hotel projects that would profit from the current boom and be well positioned for the future.

Billions of barrels of unextracted oil have drawn masses of companies, crews, and support personnel to parts of Montana and North Dakota. The boom could last for decades, prompting the need for new hotels. %%ViewCount%% Views 2 Comments
Share:
Subscribe To Newsletter