Mexico’s tourism industry has been at the forefront of international lodging trends, and the country is once again reinventing its coastlines and interior colonial towns with the proliferation of master-planned resort-residential communities.

Soon after entering the gated entrance to Mayakoba in the Riviera Maya, one senses that this is not just another beach resort. Indeed, once within this highly manicured haven, enclosed by sumptuous greenery and meandering tributaries, one might easily forget that the beach is only a few steps away. Mayakoba, arguably one of the best master-planned developments in Mexico, forms a collection of four luxury hotel and residential brands, namely Fairmont, Rosewood, Banyan Tree, and Viceroy. Adding to the upscale ambiance, El Camaleón golf course, which hosts Mexico’s only PGA-sponsored tournament, winds tranquilly through the grounds. This "Village on the Water" features extensive man-made cenotes (freshwater lagoons unique to the Yucatan Peninsula). Guestrooms and villas of the four hotels extend from the beach to the inland, hidden by water and lush vegetation. As we shall see, the concept is idyllic for visitors and investors alike.

Mayakoba has been in the making for over a decade, and both the Banyan Tree and Viceroy components are in the final stages of construction. However, all throughout Mexico the trend toward exquisitely designed, master-planned resort-residential developments is well underway, and Mayakoba will soon be accompanied by similar and even more ambitious projects. Each community is expected to build upon some common fundamentals to create a unique experience. Master-planned communities are normally anchored by one or multiple upscale hotels, which are complemented by a mix of branded and non-branded residences, including custom home sites, villas, and condominiums located within a highly secure environment. Additional amenities may include signature golf courses and beach clubs, with facilities such as marinas and private landing strips becoming increasingly popular, particularly at the most-exclusive destinations. 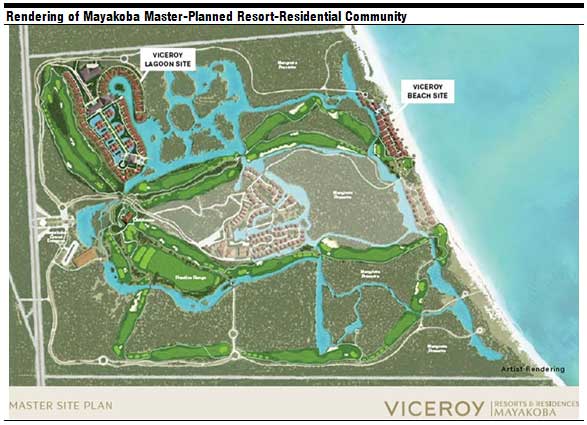 Master-planned communities in Mexico date back to 1974, when the National Trust Fund for Tourism Development (FONATUR) began developing resort destinations in Cancún, Ixtapa, and Los Cabos. Over three decades, FONATUR’s basic mission was to provide the basic infrastructure and legal certainties crucial to a successful resort community and provide resources to assist investors in the development process. Operating on this premise, FONATUR’s efforts have helped keep Mexico at the forefront of the tourism industry. Cancún is now the most recognized tourism destination in Mexico, and its growth has spurred development in nearby areas such as the Riviera Maya, Cozumel, and Isla Mujeres. Combined, the surrounding markets now boast more hotel rooms than Cancún, which attests to the success of FONATUR’s visionary plans. This government-sponsored growth has served as a catalyst for other forms of development; in Quintana Roo and other Mexican states, the development trend has now shifted to the private sector.

From Acapulco to Zihuatanejo, master-planned resort-residential communities are beginning to form part of a larger demographic phenomenon that is expected to have a noticeable impact on future travel and tourism trends. During the past four to six months, the residential sales market in Mexico has experienced a slowdown, primarily attributable to greater fiduciary caution and stricter lending practices in the U.S. The ongoing crisis in the financial markets and its effect on investor wealth and consumer confidence are likely to further impact the short-term performance of many projects. Nevertheless, prospects for mid- to long-term development remain promising.

Many of these benefits can be passed down to future investors or buyers. As such, master-planned resort-residential communities constitute an exceptional platform for investors, developers, buyers, and tourists.

Baby boomers are playing a key role in creating demand for these luxurious havens. According to the U.S. Census Bureau, there were approximately 78.2 million baby boomers in the U.S. in 20051. Members of this generation, so defined as individuals born between 1946 and 1964, began turning 62 in 2008. Many are planning for retirement, relocation, the purchase of second homes, or simply traveling more often. According to an annual survey conducted by U.S. developer Del Webb Corporation in 2004, 55% of baby boomers plan to move upon retiring. In 2006, the National Association of Realtors estimated that over one million Americans owned a second home in Mexico.

Mexico remains an attractive relocation destination given its relatively low cost of living, proximity to the U.S., laid-back atmosphere, growing healthcare services, and American-style conveniences. Mexico is now rated at the pinnacle of retirement destinations for Americans, according to International Living’s 2007 Global Retirement Index2. U.S. and Canadian retirees are attracted to the high-quality amenities and security provided by master-planned developments—and not just those along the coast. The interior of Mexico is experiencing an influx of similar developments competing for the U.S. and Canadian market. San Miguel de Allende, for example, has been welcoming U.S. and Canadian retirees for years. Prospective residents and visitors are attracted to the town’s colonial architecture, historic cobblestone streets, and relaxed atmosphere. Only time will tell what impact this growing population segment will have on tourism and residential trends in Mexico.

Mexico’s capacity for reinvention keeps it at the forefront of tourism trends. The World Tourism Organization ranks Mexico among the world’s top ten tourist destinations, the sole Latin American country to earn this distinction. The character of modern Mexico combines a reliquary of historic cultures and natural beauty with the investment-friendly atmosphere of the world’s most prosperous nations. In the future, the country’s coastlines and some regions of the interior are expected to be dotted with master-planned resort-residential communities that incorporate multiple land uses while providing the utmost in privacy and security. In the coming years, Mexican resort-residential destinations are expected to exhibit greater segmentation by offering a variety of products to satisfy demand from potential second-home buyers and retirees across a socio-economic range. While the current turbulence in the global financial markets will likely dampen the short-term performance of many projects, mid- to long-term U.S. and Canadian travel and retirement trends are expected to provide a stable base for growth, and the country’s appeal as a vacation destination should endure for generations to come.

Mexico’s tourism industry has been at the forefront of international lodging trends, and the country is once again reinventing its coastlines and interior colonial towns with the proliferation of master-planned resort-residential communities. %%ViewCount%% Views 2 Comments
Share:
Subscribe To Newsletter