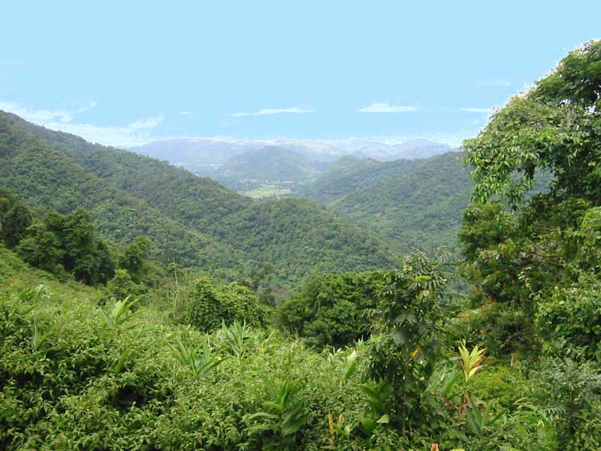 Pak Chong is the largest district of Nakhon Ratchasima province and is home to Khao Yai National Park and Khao Yai, that is located on the Mittraphap road, the main road when travelling between Bangkok and Pak Chong district. The southern part of the district is the gateway to Khao Yai National Park via Thanarad road, known as the main road of Khao Yai. Several hotels such as Sala Khao Yai, U Khao Yai, Kirimaya Golf Resort Spa KhaoYai, dusitD2 Khao Yai, Thames Valley Khao Yai, and Botanica Khao Yai are located in Pak Chong district. A number of food and beverage venues and other attractions such as waterparks, adventure theme parks, and golf courses are also situated in this area. Thus, Pak Chong district is perceived as one of Khao Yai’s main destinations for leisure activities.

The main transportation mode between Khao Yai and Bangkok is motor vehicles via Mittrapharp road. It takes approximately 2.5 hours, depending on the traffic condition. Heavy traffic can be observed during weekends and public holidays. There are several infrastructure developments being planned in the area, which will reduce travelling time and enhance the travel experience to Khao Yai in the foreseeable future. 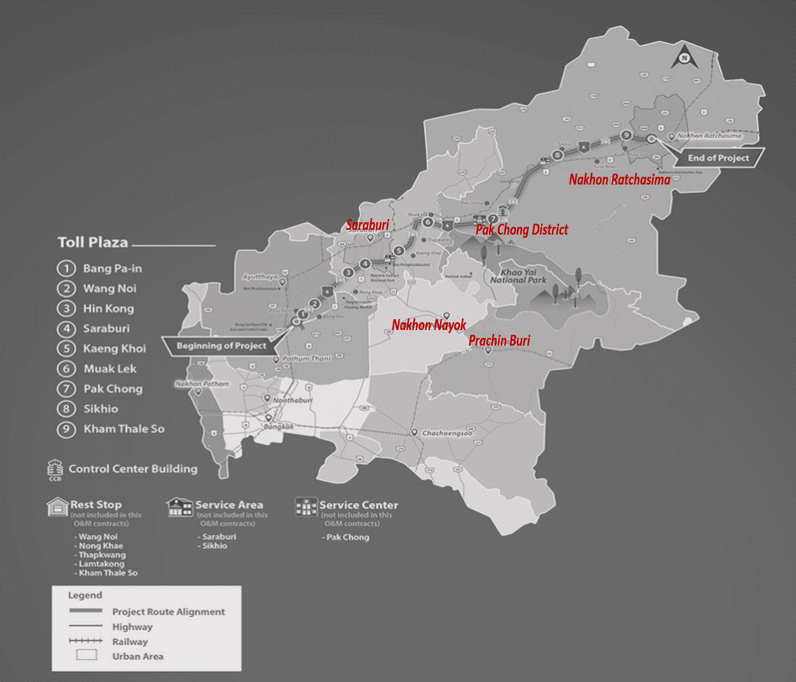 A new motorway project (the M6) is currently under construction, which begins in Bang Pa-In district of Ayutthaya province, and ends at the western part of Nakhon Ratchasima province, bypassing the Muang district. The M6 motorway is approximately 196 kilometres long, and it is expected to reduce the travelling time between Bangkok and Khao Yai by approximately one hour. The construction is scheduled for completion in 2020.

Khao Yai can also be accessed by the rail network. Currently, there are four trains daily serving between Bangkok and Muak Lek with a total travelling time of approximately 3.5 hours. This mode of transport is not favoured by tourists. However, a significant expansion of Thailand’s railway network is underway with an expected completion date between 2019 and 2024.  Notable projects for Khao Yai include: 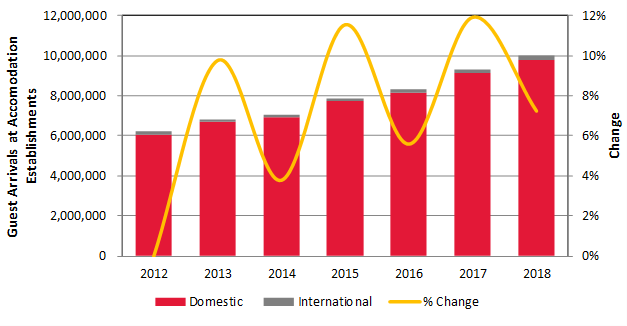 Source: Department of Tourism
As Khao Yai is situated within the Pakchong district of Nakhon Ratchasima province, a brief synopsis of the tourism industry in the province and the district is provided. Data for Khao Yai was not available at the time of writing this publication.

Guest arrivals at accommodation establishments in Nakhon Ratchasima province were just under 10 million in 2018, recording an increase of 7.3% compared to the previous year. Between 2012 and 2018, the number of guest arrivals at accommodation establishments in the province grew by 8.0% per annum, from approximately 6.0 million to 9.9 million arrivals.

Guest arrivals at accommodation establishments in Nakhon Ratchasima are mainly driven by the domestic market as the area is not as known to international visitors compared to other tourist destinations in the country. However, it should be noted that international visitors grew every year between 2012 and 2018 by 10% per annum. The European market formed the majority of international tourists to the province, together with East Asian countries. Nonetheless, international visitors to the area represented only 2.0% of the total, with Thai tourists forming over 98% of the total arrivals. This domestic prevalence has been also supported by the government’s efforts to stimulate domestic tourism by providing tax reduction incentives for Thai travellers, who can deduct accommodation fees from their annual taxable income.

The seasonality of demand for Nakhon Ratchasima province is primarily driven by climatic factors. The high season falls typically between October and January, when the mountainous province enjoys the cool season with temperatures averaging 27 degrees Celsius during the day and 17 degrees Celsius at night. May to September represents the low season when humid, rainy weather deters visitors from enjoying the area’s nature. 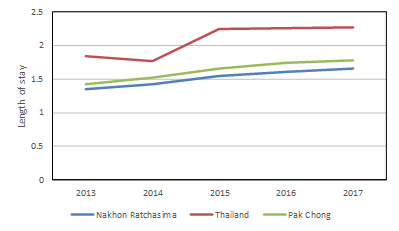 The average length of stay of visitor arrivals at guest accommodation establishments in Nakhon Ratchasima province and Pak Chong district has grown steadily, from 1.35 to 1.7 days between 2013 and 2017.

In comparison with the whole of Thailand, the province and district displayed a lower length of stay over the five-year period. The length of stay of visitor arrivals at guest accommodation establishments in Thailand was 1.84 days in 2013 and rose to 2.27 days in 2017. The data for 2018 was not available at time of writing.

Overall, we can see that Thailand, on the whole, enjoys a higher average length of stay because of the inclusion of other beach resort destinations such as Pattaya, Phuket, Koh Samui, to name a few. Khao Yai, on the other hand, lacks some of the characteristics of other resort destinations due to the limited leisure demand generators and variety of attractions, hence it achieves a shorter average length of stay. In addition, Khao Yai’s tourism demand is mainly generated by the domestic leisure segment from Bangkok, which usually stays only for the weekends, as well as the domestic MICE segment of companies located in Bangkok, which usually stays for one to two days in Khao Yai for off-site conferences, training, team building activities, etc. 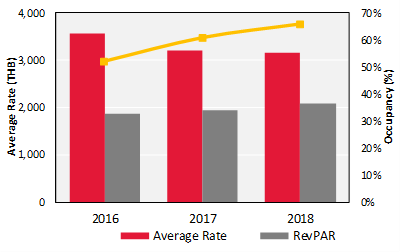 The aggregate estimated performance of a representative sample of approximately 520 rooms is shown in Figure 4. The sample consists of branded and unbranded hotels in the upscale positioning. In 2016, new supply of 142 keys entered the market resulting in lower occupancy among hotels, as the market absorbed the new supply. 2017 and 2018 registered healthy occupancy performance by the hotels in the market. As mentioned, this growth in occupancy can be partly attributed to the tax incentive measures initiated by the government for Thai residents travelling to secondary provinces in Thailand in 2018. The tax break was valid for hotel accommodations throughout the year.


Between 2016 and 2018, the average rate of the hotels in the sample experienced a negative growth of 6% per annum. The decline in the average rate is mainly due to a shift in hotels’ strategies to drive occupancy levels to more sustainable levels. As a result, the market reached the mid-60% mark in 2018, representing an increase of five percentage points from the previous year. With the dip in the average rate and the strong gain in the occupancy, RevPAR experienced an increase over the period from THB 1,860 in 2016 to THB 2,082 in 2018.

There are currently 19 hotel properties reporting to STR in Nakhon Ratchasima, with one internationally branded hotel and one managed by regional operator (dusitD2 Khao Yai and U Khao Yai, respectively). The majority of the stock comprises independent hotels, accounting for a total of 2,151 rooms.

According to HVS Asia-Pacific Hotel Operator Guide 2019, the branded hotel pipeline landscape in Khao Yai is limited to only one confirmed hotel development entering the market next year, namely the Movenpick Resort Khao Yai (a rebranding of an existing property).

Limited new internationally branded supply could be attributed to tourists perceiving Khao Yai as a secondary tourist destination after Phuket, Chiang Mai and Pattaya and the likes. However, it is important to note that the destination is mainly served by domestic brands and independent operators. Additionally, two hotels opened in the early months of 2019, adding more room inventory to the market, namely Hotel Labaris Khao Yai and Hansar Khao Yai.

Khao Yai is one of Thailand’s leisure destinations, attracting domestic travellers thanks to its proximity to Bangkok. The improvement in infrastructure networks will assist Khao Yai in attracting more domestic and international travellers. Access to Khao Yai will be further ameliorated when the new highway and the high-speed train will be completed. However, it is important to note that the domestic market will remain a key driver of the tourism industry for the area. An important factor will be the continuation of government tax reduction incentive, which stimulates the growth of domestic tourism. Due to a lack of renowned leisure demand generators, Khao Yai is expected to continue to be perceived as secondary importance when competing with other leading leisure destinations in Thailand.

As seen from the strong growth in domestic tourism, primarily fuelled by Bangkok, Khao Yai’s tourism market is set to benefit from the increasing tourist arrivals, and this upward trend is expected to continue in the next few years. Khao Yai is also becoming more attractive to the international brand operators, with the opening of its second internationally branded property in 2020. Although interest from international hotel operators is currently modest due to the fluctuation in Khao Yai’s seasonality and demand patterns, the rise in both regional and international brands could attract more international visitors to Khao Yai as brands and higher quality accommodation establishments can enhance the attractiveness of the area and place the destination on the international map. 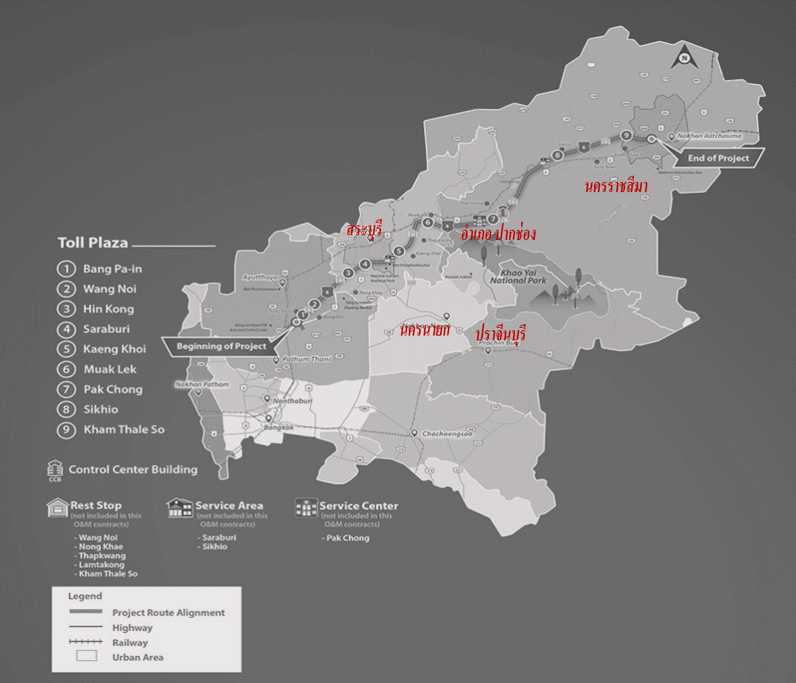 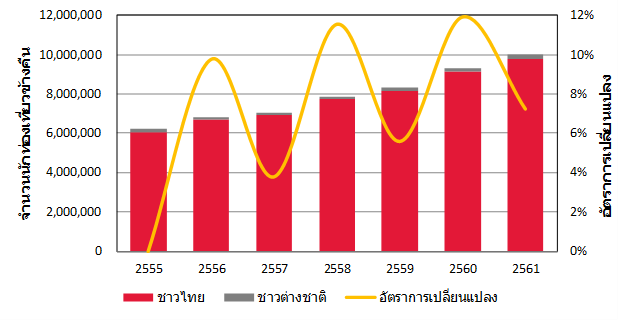 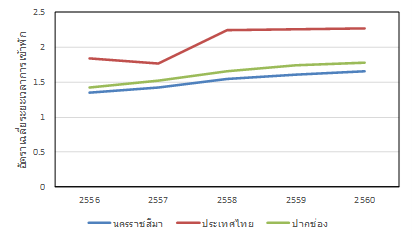 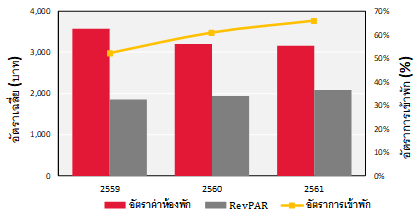