Amid a decline in Chinese tourists, Taiwan was still able to compensate this loss by expanding the scope and diversity of its tourism economy. Who are the major source markets? And what did Taiwan do to manage this situation?

With increasing strained relations between Beijing and Taipei, Taiwan has been reducing its dependency on mainland China by  improving its tourism relationships with other countries. Though the number of Mainland Chinese visitors fell dramatically, the number of visitor arrivals to Taiwan decreased only modestly in the second quarter of 2017 to 2.6 million. Visa exemptions to Southeast Asian visitors, improved air connectivity, and promotions around the country’s tourist spots have expanded the scope and diversity of Taiwan’s tourism economy. Overall, arrivals from all the major feeder markets except mainland China experienced growth.

Mainland China continues to be the largest feeder market to Taiwan with 23.4% of the market share; however, the number of Chinese visitors has dwindled by 37.9% to 605,000 this quarter from 974,000 in the same quarter last year. This registers  by far the lowest number of Chinese tourists visiting Taiwan since 2012. Since the Democratic Progressive Party’s Tsai Ing-Wen took office as President in May 2016, the tension in cross-strait relations has increased. As such, mainland Chinese visitation and expenditure levels in Taiwan were severely affected. 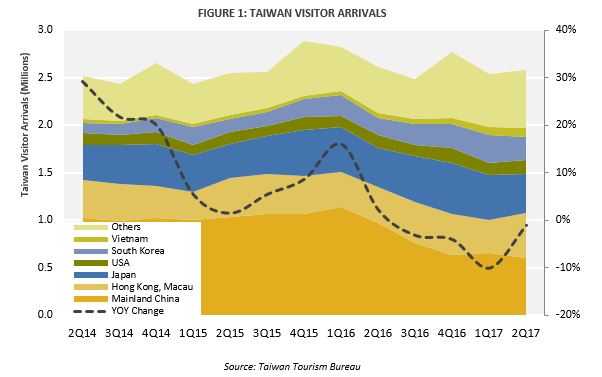 To offset the steep fall in mainland Chinese visitors, Taiwan pushed for better relationships with other feeder markets, especially Southeast Asian countries. Excluding mainland Chinese visitors, overall visitor arrivals to Taiwan recorded a strong 21.0% YoY growth in visitor arrivals in the second quarter of 2017 given the relaxed visa policies for ASEAN member states.  Starting from September 1st 2016, passport holders from ASEAN member states (Cambodia, Indonesia, Laos, Myanmar, the Philippines, and Vietnam) and India can benefit from a 30-day visa-free stay in Taiwan if they have previously obtained visas from any of a number of designated countries including Australia, Canada, Japan, Korea, the United Kingdom, and the United States in the past decade. The results of this initiative are now being realized through the remarkable growth seen from these countries in this quarter. Specifically, Vietnam recorded an impressive YoY surge of 119.2% to about 100,000 visitors, compared to last year with only 46,000 visitors. Malaysia, which accounts for a 4.9% of market share, registered a 21.0% YoY increase to 128,000 travellers; while its neighbour, Singapore, which accounts for a 4.0% market share, recorded a 7.3% YoY increase to 102,000 visitors. The Philippines and Thailand also encountered impressive surges of 94.5% and 72.8%, leading to 85,000 and 79,000 visitors, respectively. Notably, these visitors also include a share of workers for Taiwan’s many factories.

In the second quarter of 2017, Taiwan received about 467,000 visitor arrivals from Hong Kong and Macau, a 23.2% YoY increase from same period last year, making them the second largest source of foreign visitors with 18.1% market share. Taiwan has always been one of the top choices for Hong Kong travellers, due to its location and affordable airfare options. Similarly, accessibility to Taiwan for Macau residents has greatly improved with initiatives such as streamlining the permit and visa application processes, as well as opening new flights with budget airline options by Tiger Air and Far Eastern Air Transport.

Apart from targeting Southeast Asian countries and the two Special Administrative Regions of China, the county’s tourism industry also reached out to other countries, as a way to mitigate the shortfall from mainland Chinese visitors. Japan recorded a 2.4% YoY growth to 415,000 travellers, while Korea recorded a growth of more than 25.2% to 236,000 visitors. The growth from Korean visitors had been facilitated by the increasing presence of Taiwanese tourist sites in Korean television shows and films, as well as the improved  air connectivity with more direct and budget flight options. Finally, the fifth largest source of international visitors, the United States, registered a 11.0% YoY increase to 149,000 visitors, accounting for 5.8% of market share. These trends show a successful rebalancing of the Taiwanese tourism economy to other source markets, supported by favorable government policies.

In the second quarter of 2017, the overall Taiwan hotel market experienced a negative YoY growth in RevPAR. The compound annual RevPAR growth rate from 2014 to 2017 of Taipei hotels was -4.6%, Kaohsiung hotels -2.9%, and Taichung hotels -0.7%. 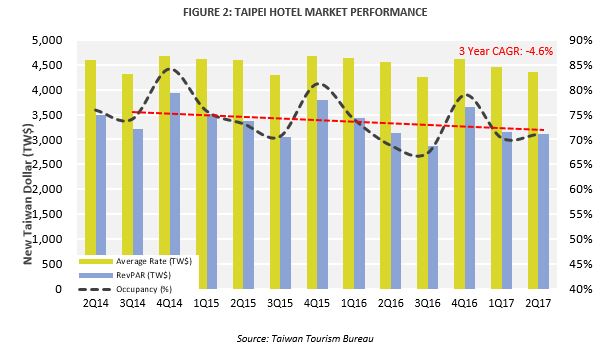 The Taipei hotel market registered 71.1% occupancy, a 2.3 percentage point increase from last year. Average rate decreased to NT$4,361, while RevPAR attained NT$3,102, a 1.2% YoY decline. Thus, the rebalancing of the tourism economy did come at the cost of average rates among Taipei hotels, partially offset by higher occupancy levels. 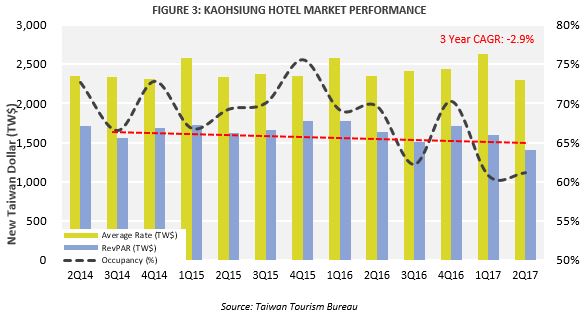 The Kaohsiung hotel market registered 61.1% occupancy, an 8.5 percentage point YoY decline. Meanwhile average rate dropped to NT$2,297, and RevPAR registered NT$1,405, a drastic 14.4% YoY decline. Kaohsiung in the past had benefitted from mainland Chinese tour groups that travelled around the island. Visitors from growth feeder markets tend to stay in Taipei only or take shorter excursions. 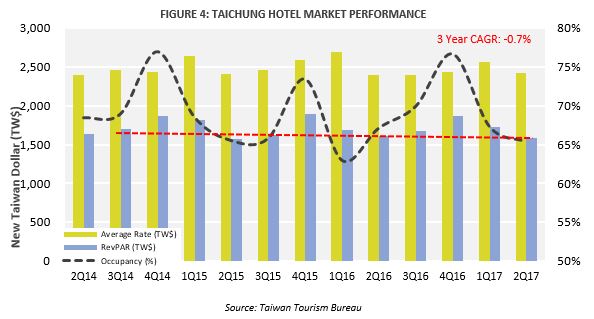 The Taichung hotel market registered 65.3% occupancy, a 1.8 percentage point YoY decline. Average rate slightly increased to NT$2,427, while RevPAR registered  NT$1,585, a 1.3% YoY decline. Taichung, due to its business activity, was less exposed to the change in visitor arrivals, however, did register a modest correction.

Overall for the first half of 2017, the slow growth of visitor arrivals to Taiwan and the weakening  hotel performance can be mostly contributed to the drastic decline of Chinese travellers. Moving forward, the trend of a decrease in Chinese tour groups is expected to continue until the end of 2017. The increase in visitation from other, regional source markets will help to partially offset this trend. In the long-term, Taiwan needs more innovation in its tourism resources to be a strong contender in capturing higher-rated FIT demand.

Amid a decline in Chinese tourists, Taiwan was still able to compensate this loss by expanding the scope and diversity of its tourism economy. Who are the major source markets? And what did Taiwan do to manage this situation? %%ViewCount%% Views Comments
Share:
Subscribe To Newsletter