The following article provides an overview of Pattaya, its tourism industry, the recent dynamics of the local lodging market and a brief outlook of its future potential.

Pattaya lies 147 kilometres southeast of Bangkok on the northern coast of the Gulf of Thailand. In 1950, Pattaya was not much more than a small fishing village; today, it is one of Thailand’s leading beach resorts that attracts visitors from all over the world. Despite the wide range of facilities for tourists, Pattaya has an image problem caused by the sex industry. Even though sex tourism is still one of the main drivers of Pattaya’s tourism market, the city is working hard to reposition itself as a family-friendly destination, providing something for everyone. The following article gives a brief overview of Pattaya, its tourism industry, and the recent dynamics of the local lodging market.

Pattaya is divided into three main districts: North Pattaya, South Pattaya and Na Jomtien. North Pattaya still retains the atmosphere of a small village, where tourists can see old wooden houses and walk around its narrow streets. South Pattaya appears older, brasher, and busier than the rest of the city. Walking Street, a pedestrian only zone, is dotted with shopping malls, night clubs, restaurants and other recreational facilities. Na Jomtien, on the other hand, is considered to have the cleanest beaches in the area. Unlike Pattaya, Na Jomtien does not have a lively nightlife district as it features family-friendly tourist attractions and water parks.

Pattaya is accessible by road, rail and air. The majority of international and domestic travellers travel to Pattaya by road, as the city is connected to the national highway network. Pattaya is about one and a half hours’ drive from Bangkok via the Bang Na-Trat Highway and Motorway 7.

U-Tapao International Airport is undergoing extensive renovation, which includes a new passenger terminal scheduled to open later this year, worth about 800 million Thai Baht. With the new terminal building, its passenger capacity is set to increase from 800,000 to 3 million passengers per year, and to 5 million passengers after 2020, on completion of the second expansion phase. 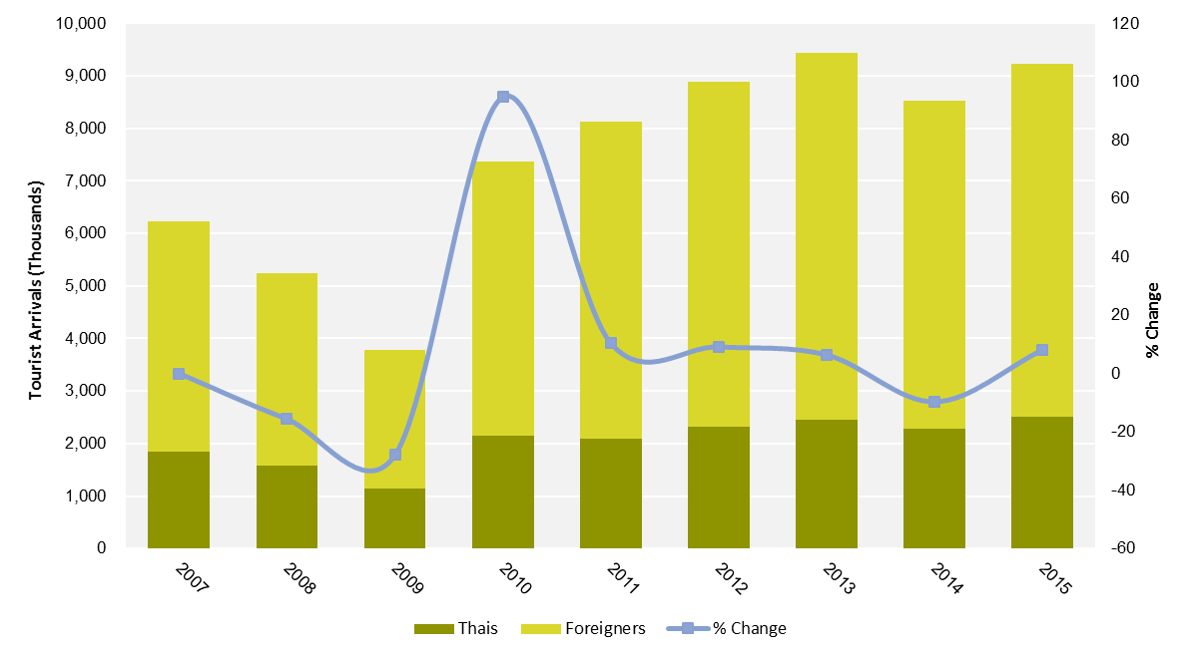 Tourist arrivals to Pattaya grew from 6.2 million arrivals in 2007 to 9.2 million in 2015, representing a compound annual growth rate (CAGR) of 5% over the period.

The tourism sector suffered from the closure of Suvarnabhumi International Airport and the global financial crisis in 2008 and 2009, which resulted in a decline in tourist arrivals to Pattaya of 16% and 28%, respectively. The industry bounced back in 2010, posting a record growth of 95%, driven mainly by international travellers. Between 2011 and 2013, the number of arrivals continued to grow, in line with the overall growth of arrivals to the country. In 2014, arrivals dropped by almost 10% to 8.5 million arrivals due to depreciation of the Russian Rouble and the political demonstrations in Bangkok, which culminated in the declaration of martial law and the military coup. However, as the situation normalised in 2015, tourist arrivals to Pattaya increased by 8.2% and are expected to have continued to do so in 2016, as the Russian market bottomed out and arrivals from China continued to be on the rise. Overall, the tourism industry in the country continued to affirm its economic importance and resilience. Thailand welcomed over 32.5 million tourists in 2016 (up by 9 %), as the latest figures show, of which 8.8 million arrived from China (up by 10%). 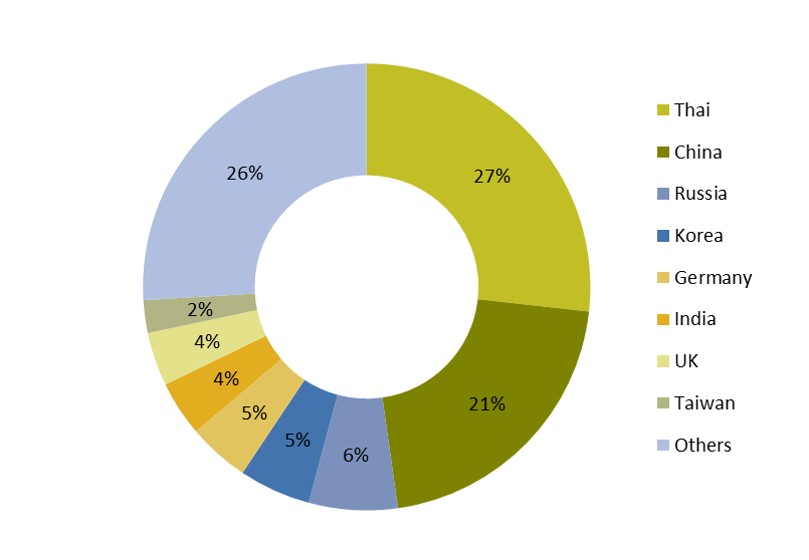 Figure 2 illustrates arrivals at accommodation establishments in Pattaya in 2015. The largest international feeder markets were China, Russia, Korea and Germany, which together made up approximately 37% of total guest arrivals.

Prior to 2013, Russia was one of the fastest growing feeder markets to the destination. At its peak in 2012, approximately 2.3 million Russians visited Pattaya, accounting for 28% of total guest arrivals. In 2013, political demonstrations in Thailand led to a decline in the number of arrivals to the country, which was overshadowed by the growth of arrivals from China. As previously mentioned, the ongoing Russian financial crisis and depreciation of the Rouble had an adverse impact on outbound travellers. However, as the Russian economy became more stable, there was a recovery experienced in 2016.

Between 2011 and 2015, the number of Chinese tourists to Pattaya grew by 24% per annum. This growth can be partly attributed to the expansion of budget airline routes between Thailand and China’s primary and secondary cities. However, many visitors were part of tour groups, the so-called ‘zero-dollar tourists’ (i.e. mostly first time travellers from China on tour packages), who contributed very little in terms of tourism dollars to the destination. As the government started to crack down on these groups in September 2016 in a bid to focus on quality vs quantity, the number of Chinese tourists to Thailand fell by 26% in the last quarter of 2016 and we expect a similar decline in Pattaya’s visitors’ numbers from this market.

At 27% market share in 2015, Thailand is the largest source market for Pattaya. Between 2011 and 2015, the number of Thai guest arrivals recorded a steady growth year on year, of approximately 6% per annum.

Expenditures and length of stay between the domestic and international market are rather different. In 2015, Thai visitors to Pattaya spent an average of 3,076 Baht per person per day, whilst foreign visitors had an average daily expenditure of 4,301 Baht per person. In terms of length of stay, Thais tend to stay for a shorter period of time (2.6 days), compared to 3.7 days for international travellers. 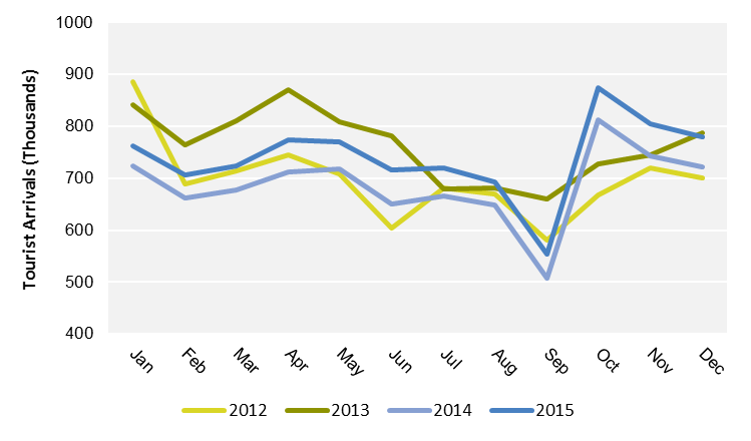 The primary high season in Pattaya falls between April and May, and December to January, whilst the period between June and September represents the off-peak season. March and, to a lesser extent, August can be considered as shoulder months. Because of the growing Chinese market in the recent years, February and October have seen increasing numbers of arrivals, due to Lunar/Chinese New Year and the Golden Week, a week long national holiday in China. Additionally, Pattaya exhibits strong weekday/weekend seasonality, as it is a favoured weekend getaway for the domestic market. 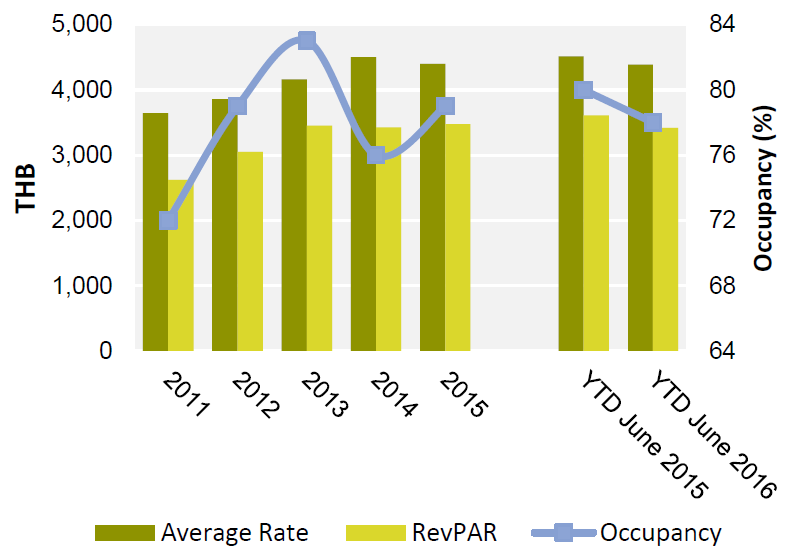 The aggregate performance of a representative sample of approximately 1,700 rooms is shown in Figure 4. This market has experienced a stable supply growth throughout. In 2014, the Upscale Hotel Market in Pattaya experienced a decline in its occupancy level, as the country suffered from political instability. Despite the decline in occupancy, the market successfully sustained average rate, which increased by 8% in 2014, resulting in a stable RevPAR compared to 2013.

In 2015, the average rate trend reversed and declined by 2.5%. However, strong demand growth resumed, bringing market-wide occupancy to 79%. Thus, the market experienced a growth in RevPAR of 6%. For the Year-To-Date (YTD) June 2016, the opening of new hotels and the revival of the Russian spurred an increase in occupied room nights of 6%. As the market absorbs the new supply, occupancy is estimated to have declined by two percentage points compared to the same period last year, while average rate by 3%. 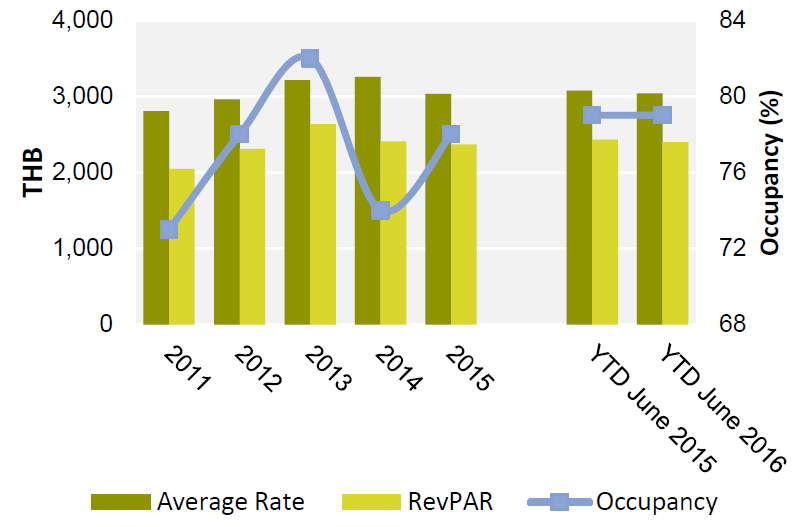 The aggregate performance of a representative sample of approximately 2,100 rooms is shown in Figure 5. Between 2011 and 2014, average rate achieved a CAGR of 5%, mostly on the back of a strengthening economy, rising disposable income levels and increasing tourist arrivals.  However, the measure fell in 2015, as room supply increased and some hoteliers implemented a discounting policy to maintain stability in occupancy levels.

According to the Department of Tourism, there were approximately 314 hotels with a total of 40,758 hotel rooms in Pattaya in 2015. Hotel supply has historically remained stable with modest growth over the last few years. Looking ahead, Pattaya’s total room inventory is expected to increase by a further 6% between 2017 and 2019, mostly concentrated in the Jomtien area.  Much of this new inventory will be managed by renowned international operators.

The completion of U-Tapao International airport should give a big boost to Pattaya’s tourism and lodging sectors, as new routes from secondary cities in China and other regional hubs will. increase air access to the destination.

As the government crackdowns on the ‘zero-dollar tourists’, Pattaya is expected to lose some of these groups and to strengthen its efforts to attract higher-spending Chinese tourists, which travel in relatively smaller parties. However, this market has a very different travel pattern than European or Russian visitors, and has characteristics that the hoteliers in the area will have to familiarise themselves with. New hotel projects along Na Jomtien Beach should bring more transient tourism and are set to raise and diversify the profile of tourists to Pattaya overall. Due to its proximity to U-Tapao International Airport, Na Jomtien beach is expected to see an influx of demand, once the airport is running at full steam.

An increasing variety of leisure attractions and meeting facilities should help attract domestic and, to a smaller extent, regional MICE event organisers to Pattaya, as an attractive value-for-money alternative. Over the next few years, Pattaya is set to undergo some major changes as the destination looks to shake off its nightlife image and become a more well-rounded family destination.

The following article provides an overview of Pattaya, its tourism industry, the recent dynamics of the local lodging market and a brief outlook of its future potential. %%ViewCount%% Views 1 Comments
Share:
Subscribe To Newsletter