Wilmington has been a high-volume destination for businesses and business travelers for decades, and commercial growth and hotel demand has begun to return following the recent recession.

Wilmington, Delaware has long held claim to the largest token population of U.S. businesses, with more than 50% incorporated in the “Corporate Capital of the World.” But Wilmington continues to undergo a transformation aimed at making the city into a premier destination to live, work, and visit, thereby expanding its population of people, businesses, and hotels. Since 1996, Wilmington’s Riverfront District has become one of the nation's most successful commercial and residential redevelopment projects, with restaurants, shops, corporate headquarters, and a regional conference facility replacing dilapidated warehouses and vacant buildings. Moreover, every acre of the redevelopment area has undergone environmental improvements to preserve and enhance ecological conditions while serving the practical needs of commercial enterprise. The following article touches on the hurdles and highlights of Wilmington’s economy and lodging market since the recent recession.

The financial sector plays a critical role in the economic strength of the Wilmington area, where local institutions include ING Direct, Barclays, M&T Bank, Wilmington Savings Fund Society, JPMorgan Chase, Bank of America, and HSBC. Activity in this cornerstone sector continues to grow following the lull brought on by the recent recession. Firms such as DuPont, AstraZeneca, and Christiana Care Health System also generate demand for Downtown Wilmington hotels.

The table below illustrates the average annual room-night demand generated by companies in and around Wilmington. 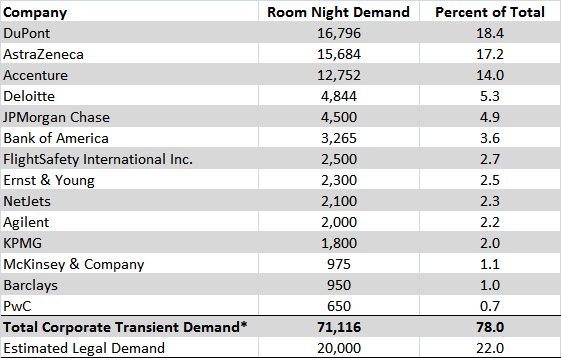 *Does not include 12,000 unreported room nights from the Hotel du Pont

The national economic crisis struck Wilmington with a surge in unemployment in 2008, a trend that continued into 2010; the government, healthcare, and legal sectors fared the best during this time, while the financial sector took the brunt of the hit. Unemployment is now bracketing 12.0%, with large-scale job regeneration expected to span several years. The following table shows the ten-year unemployment trend for the City of Wilmington compared to New Castle County, the Philadelphia-Camden-Vineland MSA, the state of Delaware, and the U.S. as a whole.

Unemployment in Wilmington vs. the County, MSA, State, and Nation 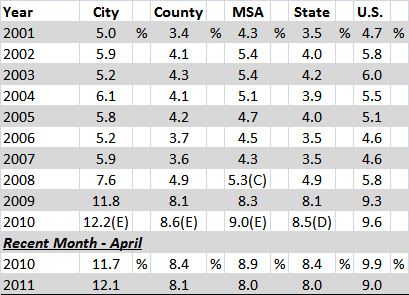 *Letters shown next to data points (if any) reflect revised population controls and/or model re-estimation implemnted byt the BLS.

Office vacancy rates increased in the second quarter of 2011 due to contractions from AstraZeneca and Barclays. M&T Bank's recent acquisition of Wilmington Trust is expected to further hurt office absorption rates as the company repositions itself in the market. In addition, average asking rents have continued to decline moderately in the most recent quarter for the CBD submarket, although research indicates that no major rate drops are expected. Nonetheless, these contractions are not expected to affect lodging demand significantly, as the anchor tenants remain stable sources of demand for local hotels.

The banking and legal sectors produce the majority of group-related hotel demand for Downtown Wilmington, with a smaller portion generated by SMERFE-related sources. The 87,000-square-foot Chase Center on the Riverfront hosts corporate meetings and conferences, shows, conventions and exhibitions, weddings, and social events throughout the year. The following table illustrates the number of events and delegates hosted at the Chase Center from its opening in 2005 through 2010.

Convention Statistics for Chase Center on the Riverfront

Source:  Chase Center on the Riverfront

After a banner year in 2007, the center managed to see minimal growth in the midst of the recession. As most events are booked at least a year in advance, the fallout from the downturn finally landed in 2010, when event and delegate numbers fell sharply owing to a shortage of bookings during the recession’s height in 2008/09. Nonetheless, attendance figures for 2010 remained well above 2005 numbers, a testament to the strength of the area’s convention market.

The Greater Wilmington Convention & Visitors Bureau (CVB) has been working to attract groups of 500 or fewer delegates from the association, corporate, SMERFE, and government segments; however, according to the CVB, without a hotel within walking distance of the Chase Center, the facility and the city are failing to attract multi-day conferences and meetings, consumer shows, training seminars, reunions, and social celebrations that require overnight stays for guests. To remedy this need, a 175-unit Westin is planned for development adjacent to the Chase Center. A project of the Buccini/Pollin Group, the hotel is slated to open in January of 2013.

Wilmington lodging trends for the last ten years are shown in the table below. 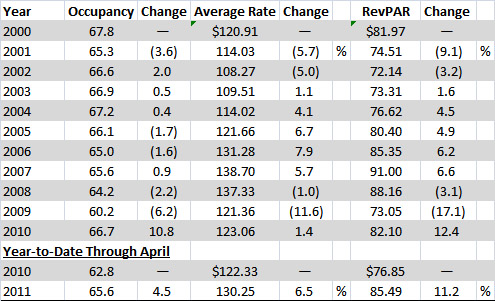 After several years of growth, average rate began to decline mid-year 2008. This trend worsened in 2009 as area hotels sought to entice travelers and boost occupancy levels with discounted rates; at the same time, major corporate and group accounts became aggressive in demanding price concessions. While discounting was prevalent through early 2010, rates began to strengthen in May of that year and continued to rise through the year-to-date 2011 period.

Not surprisingly, occupancy fell in 2008 and 2009, a result of the recession and a drop in both corporate-transient and group demand. In 2010, the market bounced back to pre-recession occupancy levels; hoteliers reported that a sizeable amount of pent-up demand began to penetrate area hotels during the last quarter of 2009, and this upward demand trend continued through the year-to-date 2011 period. A majority of the growth is attributed to the strengthening of corporate-transient business, particularly from the numerous legal and banking entities in Downtown Wilmington.

Hoteliers reported that renewed demand from corporate and group functions also helped contribute to the recent rebound. Business travel has been very strong Monday through Wednesday, with occupancy levels in the high 80s and mid-90s. According to local hotel managers, the market has a significant amount of unaccommodated commercial demand on the weekdays, which currently overflows from Downtown Wilmington to the nearby suburban markets.

No new select- or full-service hotels have been built in the Wilmington market since 1999, and the lack of new lodging supply has helped local hotels maintain stable occupancy levels over the past decade. Several existing hotels in Downtown Wilmington, including the Sheraton Suites Wilmington and the DoubleTree Downtown Wilmington, have significant renovations planned for 2011/12, in part to help them compete with the new Westin in 2013.

Wilmington’s pro-business laws and its location between two of the nation’s most active urban centers, New York City and Washington, D.C., puts it in an advantageous position for future economic development and growth. The diverse mesh of commercial industries in the Wilmington market has helped it absorb the brunt of the national economic downturn, and the data show that area hotels have begun to bounce back. The new convention center hotel should give a boost to demand captured from the meeting and group segment and produce spillover demand to other area hotels. While tenuous, the national economic recovery should help stabilize Wilmington’s hotel performance and fortify demand levels in the coming years.

Wilmington has been a high-volume destination for businesses and business travelers for decades, and commercial growth and hotel demand has begun to return following the recent recession. %%ViewCount%% Views 1 Comments
Share:
Subscribe To Newsletter