Through our work with hotel investors and developers, we have seen a major uptick in the availability of hotel financing across all European markets in recent years. The widespread availability of bank financing for hotels is partly due to stronger hotel market fundamentals and partly to a more resilient banking sector across most of Europe. Paired with historically low interest rates, this trend has resulted in increased transaction volumes with many deals seeing the use of all available debt.

HVS London reviewed and analysed the current lending environment for hotels following a comprehensive survey conducted among hotel teams of leading European banks. The survey consisted of five questions, focusing on current lending parameters for hotels, loan characteristics as well as an outlook on lending criteria. Presented in this report are the consistent themes and trends uncovered.

1.  Senior debt is available for all project types

Debt for hotels is available in Europe, albeit some regional differences do exist. Our respondent banks are all willing to issue senior debt for existing property acquisitions, refinancing, renovations and expansions. In the case of new hotel constructions, however, Western European lenders are much more cautious, with only 50% of lenders willing to consider these projects. This attitude mirrors their perception of the market being at a more mature phase in the cycle, resulting in more cautious lending and fears of possible oversupply.

2.  Lenders prefer full-service properties at the higher end of the chain-scale segment

Overall, upscale and midscale hotels are the most favoured type of hotels to receive loans, followed by the luxury segment. Economy properties have received the least amount of financing from our respondents.

Figure 2: Portion of Loans Given by Chain-Scale Segment 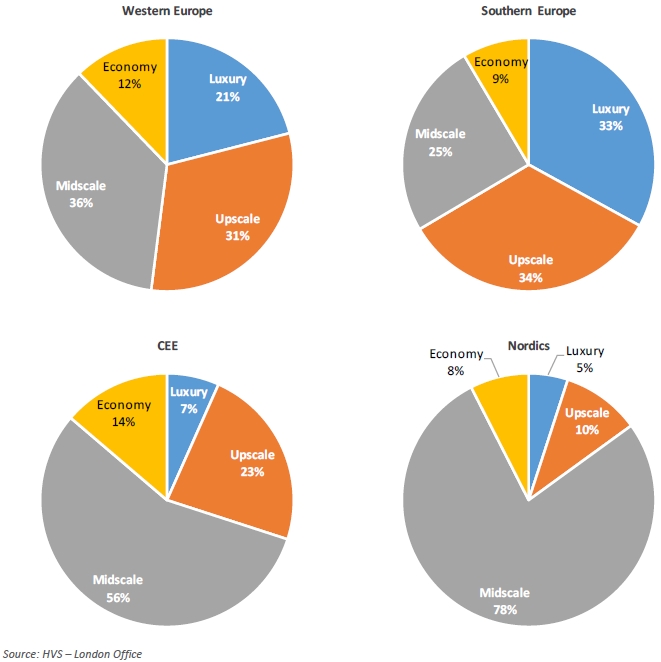 3.  The largest loans are originated by major Western European banks

In terms of the size of loans issued, Western European banks can issue the largest loans. As smaller regional banks are not able to finance projects above €250 million, their Western European counterparts often step in and provide syndicated funding for the largest projects across the continent. When originating syndicated debt, most responding banks can offer loans up to three times the size of non-syndicated financing.

Almost all respondents indicated a loan to value (LTV) ratio of above 50%, with the exception of secondary cities in Southern Europe. Unsurprisingly, primary cities tend to achieve higher LTVs, predominantly above 60% for leases, again with the exception of Southern Europe where the median LTV for primary cities is 52.5%. Furthermore, banks value the perceived lower risk profile of leased hotels across Europe and offer consistently higher LTVs for these properties than for hotels under management contracts.

The same trend can be observed for debt service coverage (DSC) ratios, where respondents require higher DSC ratios in secondary markets and are more cautious about management contracts than for leased hotels.

Variable floating rates in basis points (bps) follow a more varied trend, with average margins ranging from 170 bps in primary markets in the Nordics to 360 bps in secondary markets in the CEE. The trends observed in both fixed and variable interest rates come as no surprise and are in line with the generally perceived risk associated with various markets across the continent.

5.  As bank lending tightens in the future, the shadow banking sector will fill the gap

In terms of the future outlook, responses showed significant regional differences, with Southern European banks being the most positive about hotel lending in the next 24 months. In the case of Western European banks in particular, answers were largely varied in terms of their outlook, with approximately the same number of banks predicting an increase in the size and number of their hotel loans, as those that predicted decreases in these categories. This uncertainty might be yet another signal of a possible tipping point in the cycle.

Western European and Nordic banks have indicated that interest rates are likely to be on the rise again. While this does not come as a surprise considering the historical lows that interest rates are at currently, it is interesting to note that with the consensus for a possible ECB rate hike pushed out to mid-2018, it is likely that these banks might try to increase their margins in the coming years.

Whereas bank lending has undoubtedly been more available over the past few years with more favourable hotel market fundamentals across Europe, most banks are cautious about increasing their lending at the current stage of this cycle. With close to 60% of bank lenders agreeing that lending from the shadow banking sector will increase their activity in the future, investors and developers are getting more creative in filling the gap in lending.

Despite Western Europe reaching a possible tipping point in the cycle and lenders becoming more prudent, our survey of European hotel lenders indicates a healthy appetite for hotel investments in Europe. With debt being generally available for all project types at historically low interest rates in most regions, borrowers with well-founded business plans should be able to secure financing for their hotel investments.