Glasgow's hosting of international events has increased its global exposure and led to the development of a cosmopolitan hotel pipeline, which is in itself a sign of greater investor confidence in Scotland's second city.

Since the global economic slowdown in 2008 and 2009, the total number of passengers at Glasgow International Airport has been increasing year-on-year over the six years to 2015, resulting in an overall compound annual growth rate of 5.9%. 2015 was a very strong year with numbers returning to pre-crisis levels, owing to healthy growth in both international and domestic passengers, which increased by 16.8% and 9.0% respectively. Year-to-August 2016 figures indicate an increase of 7.3% on the same period last year.
FIGURE 1: PASSENGER ARRIVALS, GLASGOW AIRPORT 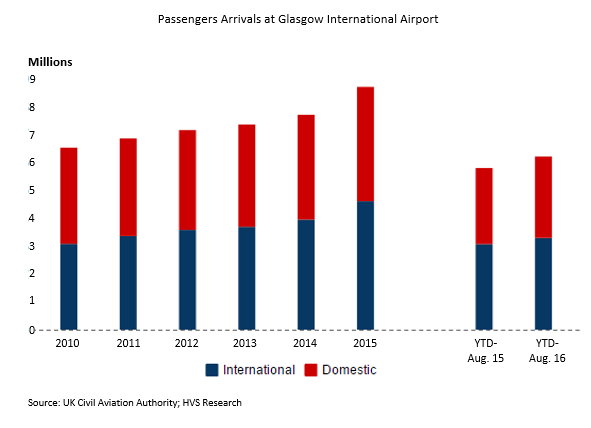 In 2015, the main international feeder markets in terms of arrivals were the USA (1st), Germany (2nd) and France (3rd). The following icons show the percentage shares of these arrivals.
FIGURE 2: ARRIVALS – INTERNATIONAL MARKET SHARE

Even long-haul feeder markets are top source countries that include the USA (1st), Australia (4th) and Canada (7th). Ancestral tourism is becoming an increasingly popular reason for tourism to Scotland as travellers come to learn about their ancestral roots before the mass emigrations to North America and Australia through the 18th and 19th centuries.

According to Visit Scotland, the average length of stay in Glasgow has slightly decreased from 3.5 days in 2009 to 3.3 in 2015. Whilst the domestic market stays on average 2.5 days, international visitors generally stay 5.2 days, reflecting the longer travel distances.

Purpose of Visit and Seasonality

As the above chart suggests, Glasgow is predominantly a leisure destination characterised by a strong seasonality pattern. While the summer months of June, July, August and September are extremely busy with hotel room occupancy levels of around 85%-90%, the winter period tends to be more challenging with occupancy levels at around 65%.
FIGURE 4: ROOM OCCUPANCY – AVERAGE 2013-15 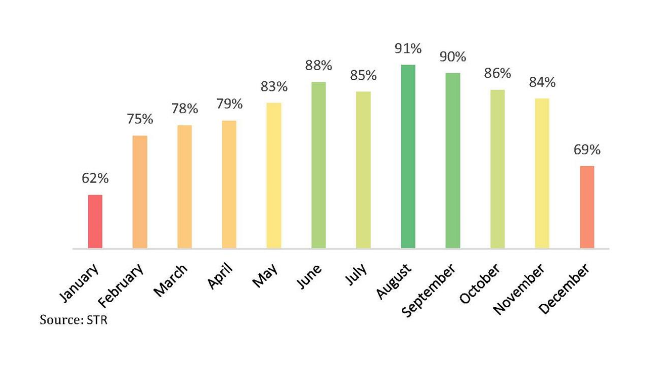 2014 was a fantastic year for hoteliers, owing principally to the Commonwealth Games. While occupancy increased by 4.6%, average daily rate recorded a 16.9% increase, resulting in an impressive rooms revenue per available room (RevPAR) growth of 22.3%.
FIGURE 5: MARKET PERFORMANCE

In 2015, whilst average rate remained stable at £72, occupancy decreased slightly to 81.7% and RevPAR largely held its position. Average rate expectations of centrally located full service hotels are broadly in the range of £80-£100, and for limited service hotels around £55.

Year-to-October figures indicate a continued downward trend in occupancy, likely impacted by the increase in supply and a solid growth in average rate.

The £1.1 billion Glasgow & Clyde Valley City Deal is an initiative by the UK and Scottish governments to invest in the Glasgow city region through infrastructure and connectivity projects. The Gigabit City fibre network, for example, will support Internet connectivity up to 100 times faster than the UK average, and the resurrected proposal to develop a ‘tram-train’ linking Glasgow Airport and the city centre is gaining support. If approved this month, the construction is scheduled to begin in 2022 with completion by 2025.

As part of the Edinburgh-Glasgow [transport corridor] Improvement Programme (EGIP), Glasgow Queen Street Station (Scotland’s third busiest station, handling around 55,000 passengers a day) is currently subject to a £112 million redevelopment designed to accommodate the expected increase of around 20,000 passengers a day by 2030.

The redevelopment of the station involves the demolition of part of the Millennium Hotel Glasgow and Consort House, the redesign of the main entrance, as well as the expansion of the platforms to accommodate longer eight-car trains. Completion is expected in March 2019 and the development is widely anticipated to enhance the surrounding area and increase Glasgow’s connectivity with its regions.

Hotel supply is a balance of budget and full-service offers. The city’s hotel pipeline is more lifestyle-midscale orientated, appealing to a wider clientele. International hotel groups are choosing to implement their latest concepts in Glasgow, following the likes of CitizenM and Z Hotels. Over 1,100 new rooms are due to enter the market over the next 18 months. 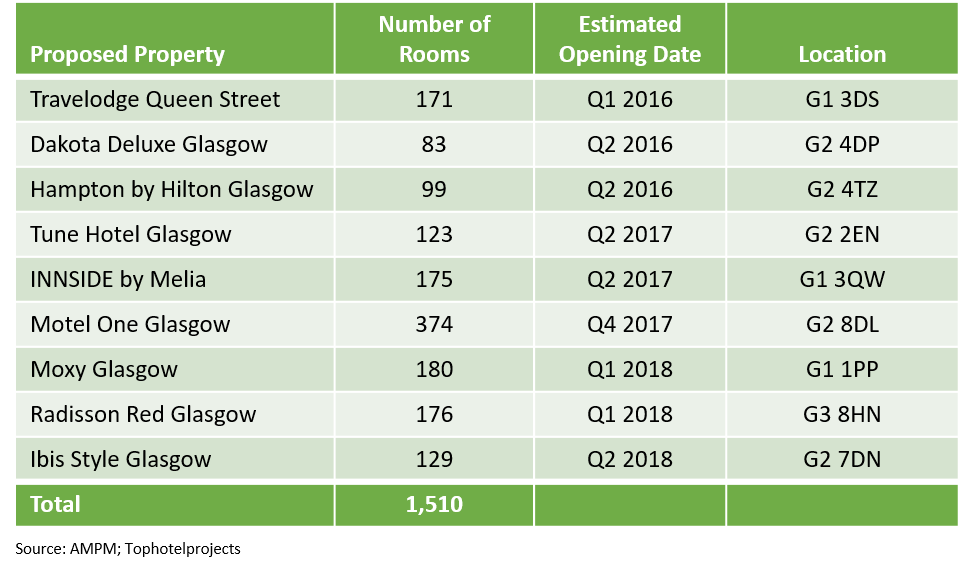 Recent hotel transactions have been largely part of portfolios with value ‘allocations’ of limited use to single asset investors. The 103-room Campanile Glasgow Airport was sold for £6.8 million in December 2015 to Whitbread Plc for conversion to a Premier Inn. The 100-room Blythswood Square Hotel (the only five-AA-star hotel in Glasgow) was sold to Starwood Capital in January 2015 for an undisclosed sum and has since been branded a Principal Hotel. Elsewhere the Loch Lomond Cameron House was purchased by KSL Capital Partners in November 2015.

These and other commercial property investments demonstrate the new familiarity foreign-based investors, including private equity firms, now have with Glasgow. The volume of new hotel supply is in some way a response to investor confidence in the operational market, which in terms of RevPAR is ranked seven out of 24 in the UK by STR.

The rapid success of the Hydro Arena and the city’s hosting of international events has increased global awareness of Glasgow as a tourist destination, and strengthened its position as a European MICE market. This exposure has led to the development of a cosmopolitan hotel pipeline which is a sign of greater investor confidence in the market.

Glasgow's hosting of international events has increased its global exposure and led to the development of a cosmopolitan hotel pipeline, which is in itself a sign of greater investor confidence in Scotland's second city. %%ViewCount%% Views Comments
Share:
Subscribe To Newsletter