Activity in medicine, technology, conventions, and tourism brought near-record visitation to New Orleans over the past year. Major developments, ranging from infrastructure to new business and cultural districts, continue to drive hotel demand.

New Orleans’ cultural attractions have held sway for centuries, but new advances have helped diversify and strengthen the city’s economy over the past several years. New Orleans’ growing biomedical and technology infrastructure is attracting global companies, and a series of high-profile events have highlighted the city’s return to prominence as an international destination. The resulting near-record tourism levels and strong convention seasons have helped make the New Orleans hotel market one of the best performing in the nation.

Development Update
Following Hurricane Katrina, state and federal aid and incentive programs, including the Gulf Opportunity Zone Act of 2005, fueled recovery efforts in New Orleans. In recent years, public and private investments in local attractions and infrastructure have driven major revitalizations that include the following:

The return of residents displaced by Hurricane Katrina accounts for much of the steady rise in population in New Orleans since 2007. Although the market’s population in 2012 reached its highest level since the storm, it remains somewhat below the peak recorded in 2004.

Area employment has remained relatively stable since 2007. Recovery projects in the years following Hurricane Katrina kept employment in New Orleans low in 2007 and 2008, though the dissipation of many of these temporary jobs has caused unemployment in the greater New Orleans area to inch closer to the national average in recent years. Unemployment is forecast to remain near 9% in 2013, as setbacks like the closure of Avondale Shipyard hamper job growth. Significant growth is expected to resume in 2014 and to continue through 2016 as the University Medical Center and VA Hospital bring new jobs to the market.

The following table details unemployment statistics for New Orleans, the MSA, the state of Louisiana, and the U.S. as a whole from 2002 through 2011. 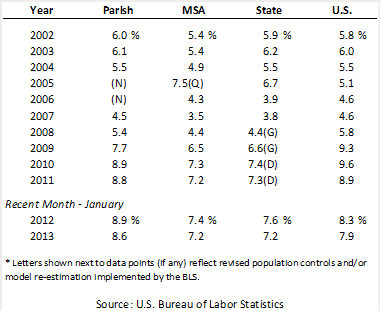 New Orleans’ economic base has broadened in recent years to include a vibrant healthcare sector, though the local economy is still founded primarily on hospitality. The city’s tourism industry employs approximately 78,000 and generates some $5 billion per year in new visitor spending4. The New Orleans hotel market now boasts nearly the same number of rooms as it had prior to Hurricane Katrina, and airport passenger traffic, visitation levels, and hotel occupancy all returned to pre-Katrina levels in 2011. New Orleans’ movie and television production industry also remains strong, with a number of projects filmed in New Orleans in 2012, including Django Unchained and HBO’s Treme. The Mayor’s Office of Cultural Economy reports that 2012 film and television production in the city accounted for $669.8 million in direct spending, a 23% increase over 20115. Additionally, the city’s revitalization has sparked interest from national and international corporations. In early 2012, GE Capital selected New Orleans as the site of its GE Capital Technology Center, which will reportedly bring 300 new jobs to the area.6

Vacancy is highest in the Central New Orleans submarket, a result of a large inventory of office space and the recent trend of tenants moving to newer and more attractive space in the Metairie and North Shore submarkets. Asking rents for Central New Orleans are the lowest of the four major submarkets, as lessors seek to absorb large amounts of vacant space by drawing office tenants back to the city’s central business district (CBD). The relatively low office vacancy rate in the North Shore submarket is due in large part to the relocation of Chevron Corporation’s regional headquarters in 2008 from the CBD to a new 300,000-square-foot, LEED Gold Certified campus in Covington7, which represents nearly half of the occupied office space on the North Shore.

The following table illustrates a trend of office space statistics for the overall New Orleans market. 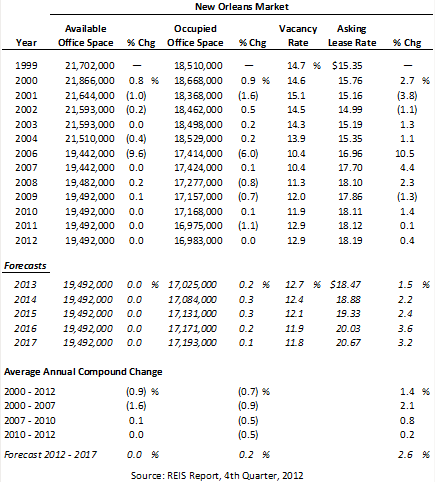 Available office space in the greater New Orleans market has remained fairly stable, while vacancy rates began to increase in 2008. Nonetheless, office vacancy remains below the levels observed in the years prior to Hurricane Katrina, and vacancy levels are forecast to fall below 12% over the next five years.
Visitation and Convention Outlook

The following table illustrates visitation statistics for New Orleans since 2003.

Visitation to New Orleans has increased dramatically following recovery and marketing efforts in the wake of Hurricane Katrina. According to the New Orleans Convention & Visitors Bureau (CVB), in 2012, the city welcomed its largest number of visitors since the historical peak year of 2004; visitor spending in 2012 reached its highest level ever. Recent events in the city include the BCS National Championship and NCAA Men’s Final Four in early 2012 and Super Bowl XLVII and the NCAA Women’s Final Four in early 2013. In February of 2014, the city will host the 63rd NBA All-Star Game.

The New Orleans CVB reports that convention bookings have held strong. Citywide conventions scheduled for 2013 include the Healthcare Information & Management Systems Society (HIMSS) Annual Conference & Exhibition in March, Microsoft’s TechEd in June, and the conferences of three major medical associations in the fall; each of these events is expected to generate in excess of 5,000 room nights. Tourism officials and local operators report that bookings for 2014 are somewhat slower than those of recent years; however, bookings for 2015 and 2016 indicate a strong recovery. The CVB has set a goal of welcoming more than 13 million visitors to New Orleans by 2018, which will mark the 300th anniversary of the city’s founding.

Outlook on Market Occupancy and Average Rate
Occupancy growth accelerated in 2012 on the strength of an influx in visitors for the BCS National Championship and the NCAA Men’s Final Four, as well as a rise in convention attendance in the second quarter of the year. With hotels in the market reporting record occupancy levels, HVS expects occupancy for the New Orleans market to stabilize in 2013 as hoteliers focus on raising rates to drive revenue growth. The Super Bowl in February of 2013 resulted in an effective sellout of the entire New Orleans market for a four-day period, and despite the rate controls implemented by the National Football League, local operators were reportedly able to increase asking rates to levels much higher than the norm8. This trend should continue through the end of 2013, bolstered by a strong convention year and increasing tourism; occupancy, however, is expected to exhibit a temporary correction in 2014 in the absence of induced demand from the major events of previous years. Beyond 2014, New Orleans’ popularity as a tourism and convention destination should allow for modest growth in market occupancy and average rate.

Brokers’ Outlook
Brokers, operators, and other market participants project less than 2% growth in market occupancy, while average rate is expected to grow between 5% and 7%, largely on the strength of significant rate increases during the Super Bowl in early 2013. Brokers report an average marketing period of approximately six months for hotels in the market. Stabilized capitalization rates range from 8.5% to 9.5% for limited- and select-service hotels, with rates of 8% to 9% for full-service properties. According to brokers active in New Orleans, the anticipated strength of the market in the near term makes New Orleans hotels a relatively low-risk investment; most market participants feel that now is the time to sell limited- and select-service properties and to buy full-service hotels, particularly those located in the CBD.

The vast majority of these hotel transactions were concentrated in the greater New Orleans market. Contracted prices per room for hotels in the New Orleans market remain strong; since the beginning of 2012, no hotel in the market has sold for less than $100,000 per room.
Notable transactions in the past year include the sales of major assets such as the InterContinental New Orleans and the Embassy Suites New Orleans, in addition to a five-property portfolio of Marriott-branded hotels, which sold in March of 2013. Brokers and operators in the market report that buyers continue to expect significant revenue growth in the near term, an opinion supported by capitalization rates derived from the illustrated sales, five of which fall below the aforementioned 8% benchmark for stabilized properties. The number of hotels selling at stabilized capitalization rates, however, is gradually increasing, as properties renovated or converted following Hurricane Katrina finish ramping up their operations.

Hotel Construction Update
According to HVS research and information provided by city planning officials, the only major hotel project announced for the New Orleans market is a property that is expected to be constructed in conjunction with the long-rumored redevelopment of the vacant Six Flags New Orleans theme park. The product of a public-private partnership between the City and DAG Development, the project would also include a 400,000-square-foot outlet mall, a big-box retailer, an entertainment boardwalk, an amphitheater, a sports field, and a water park. The feasibility of the Six Flags redevelopment is currently in question given competing plans for the conversion of the CBD’s Riverwalk Marketplace into an outlet mall complex.

Despite delays in the Six Flags redevelopment project, the continued strength of the New Orleans market, combined with greater options for financing, should open the door to new hotel developments in the near term. High barriers to new supply remain in place in the CBD, with few vacant parcels available for new construction. Furthermore, brokers report that owners of buildings available for conversion have dramatically increased their asking prices as local hotel performance has improved.
Nonetheless, a handful of hotel projects have been completed in recent months. In May of 2012, the 170-room Hyatt Place New Orleans Convention Center opened in the Warehouse District, directly across from the Ernest N. Morial Convention Center; the Hyatt Place is the product of an eight-month conversion of the former Hotel New Orleans, which had previously operated as a Holiday Inn Express. In December of 2012, the 132-room Hotel Indigo New Orleans Garden District opened after a two-year conversion of the former Garden District Hotel in New Orleans’ historic Uptown neighborhood.

Conclusion
New supply is expected to have only a minimal impact on market performance in the coming years, as New Orleans continues to reemerge as a global destination city. Visitation to the city is nearing a record high, with major events such as Super Bowl XLVII showcasing the city’s revitalized infrastructure. Looking forward, major upcoming events and conventions, as well as the city’s immense appeal to leisure travelers, should keep hotel performance and transactions strong in the near term.