Unemployment and office vacancy has been dropping in Columbus, the state capital and a major center for financial and healthcare services in Ohio. Hotel occupancy hit a record high in 2012, and average rates are gaining ground.

A lodging market is only as strong as its cornerstones of demand, and in this respect, Ohio’s state capital of Columbus has the fundamental elements to create success for local hotels. State government operations, the headquarters of six Fortune 500 and nine Fortune 1000 companies, a convention center that hosts millions of visitors annually, and The Ohio State University—with one of the largest undergraduate enrollments in the country—all leverage a significant economic impact. The following highlights new developments in and around the Columbus CBD and the effects that these and other demand generators are having on local hotels. 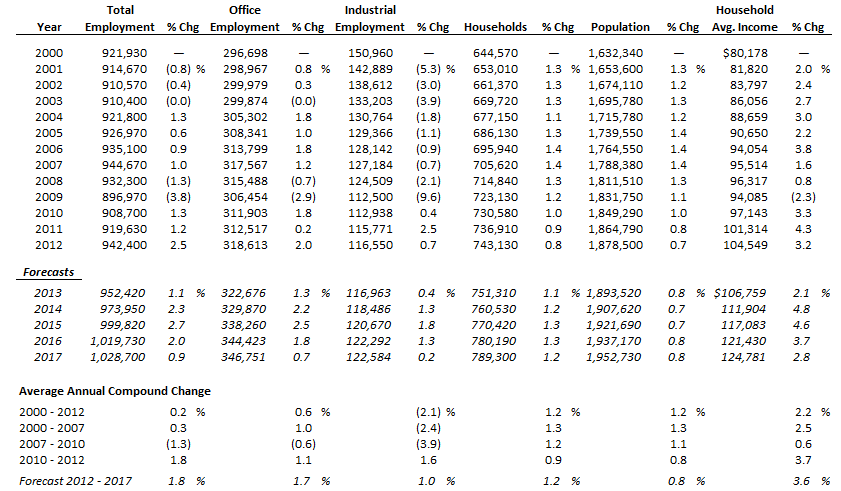 After peaking in 2002, unemployment rates in the area bracketed 5.0% until rates started to rise in 2008. The Columbus area has lost manufacturing jobs over the past ten years but has added positions in the services sector. Local employment has been strong at entities such as Nationwide and The Ohio State University. Data for 2011 and the most recent comparative period illustrate an improvement, similar to state and national trends. Total employment for 2013 is expected to exceed the previous peak from 2007. As growth resumes, economic development and city officials are confident in the Columbus market’s long-term potential.

The following table illustrates unemployment statistics for Franklin County, the Columbus MSA, the state of Ohio, and the U.S. from 2002 to 2011. 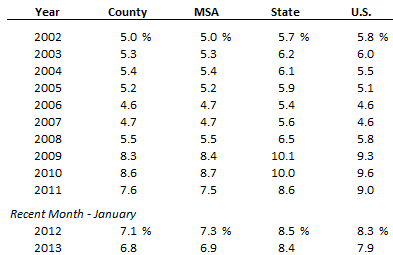 While growth in the Columbus area slowed considerably during the recession of 2008/09, in line with national trends, Columbus remains the top-performing city in the state of Ohio. Traditional economic mainstays such as government entities, The Ohio State University (OSU), corporate headquarters, and large financial institutions continue to lend stability to the local economy. Several civic-funded projects have recently been completed in Columbus, including the new municipal courthouse and the new convention hotel in the Arena District. Casino gambling also entered the Columbus area in October of 2012 with the opening of the $400-million Hollywood Casino on the city's west side. In the University District, two major healthcare projects are underway, with expansions at Riverside Methodist Hospital and OSU's Wexner Medical Center, as well as the construction of the new Covelli Arena on OSU's main campus. Multi-family housing development has also emerged as one of Columbus’s major growth sectors, with more than ten apartment and condominium developments under construction in and around the downtown area.

The combined Upper and Lower Downtown submarkets make up the largest concentration of office space in the city of Columbus and register the lowest vacancy rate. The Worthington/Westerville area and the Dublin/Hilliard area, which also contain large portions of Columbus’s nearly 32 million square feet of office space, make up two of the city’s largest suburban lodging markets as well. Worthington, Dublin/Hilliard, and the Downtown submarkets enjoy relatively low vacancy rates. The Downtown submarkets command a $2 to $4 premium over lease rates in the city’s suburban markets.

The following table illustrates a trend of office space statistics for the overall Columbus market. 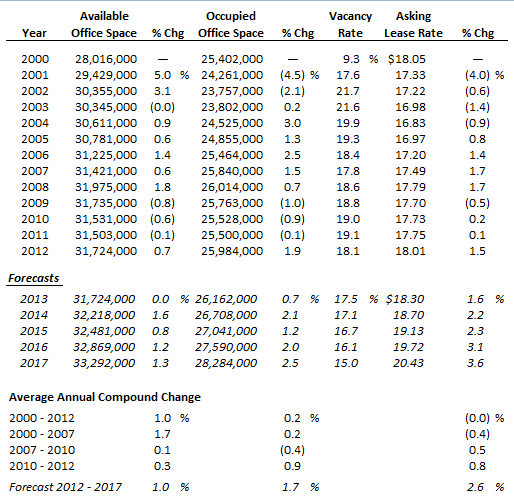 The positive trends for Downtown are expected to continue, even with the addition of new space planned for 2014. Overall vacancy is anticipated to reach a 13-year low in 2014.

Hotel Construction Update
The Columbus lodging market has continued to grow in the years since the recession. From January 2009 to October 2012, fifteen hotels opened across the Airport, Polaris, OSU, and Hilliard hotel submarkets, accounting for 2,341 new hotel rooms. The largest property to open was the new 532-room Downtown Hilton Convention Hotel. More recently, the Holiday Inn Express Hotel & Suites Easton and the Courtyard by Marriott New Albany opened in the spring of 2013. In addition, the conversion of the former Wingate Inn Polaris to a Four Points by Sheraton was completed in April of 2013.

According to HVS research, the following new hotel projects are currently in the pipeline:

Of note, hotel projects have been discussed for the Hollywood Casino, the redevelopment of the old Cooper Stadium in Westerville, and near the bedroom community of Delaware on Columbus’s north side. While many new hotels are expected to enter the market in the coming years, the effect on overall occupancy should be minimal. The Columbus MSA offers over 26,000 rooms, and while individual submarkets will be impacted, overall demand growth in the market area is expected to outpace the new supply.

Outlook on Market Occupancy and Average Rate
Occupancy in the Columbus MSA hit bottom in 2009, falling to 52.6%. The recovery was swift, however, and by 2011, the market matched the pre-recession peak for occupancy, bolstered by strong commercial growth that year. Occupancy in 2012 constituted a record for Central Ohio, as major commercial projects came online, and the opening of two new casinos in Columbus boosted both construction-related and leisure travel to the area. Average rates in the market have registered growth since 2010, and the influx of new, high-quality supply has assisted area hotels in commanding higher rates. With the recovery of both occupancy and average rate, the market is well positioned for continued growth, particularly in high-performing submarkets like Polaris, Easton, Dublin, and Downtown.

Recent Hotel Transactions
The following table summarizes hotel transactions in and around Columbus since April of 2010. 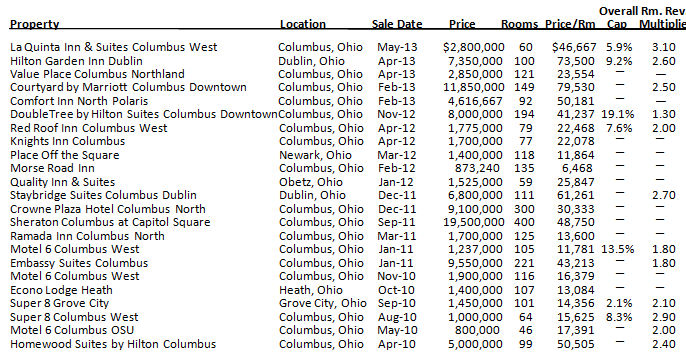 The transactions above represent an array of property types, buyers, sellers, and submarkets. The derived capitalization rates and prices paid per room show an even more dramatic spread. Several of the budget-oriented properties on the list were distressed or auction sales, and many of the full-service hotel sales required significant capital improvements after the sale in order to either maintain the hotel’s brand affiliation or re-flag the property. Sale prices have been trending upward for high-quality assets in good submarkets, particularly midscale limited- or select-service properties that operate at over 100% RevPAR indexes. Hotels that underwent significant renovations during the downturn were better positioned during the market recovery and were able to capitalize on the returning demand levels.

Conclusion
The outlook for Columbus’s lodging landscape is optimistic. Most of the hotel supply that opened in the last 36 months has been quickly absorbed in each respective submarket, and while the new Hilton’s 532 guestrooms made a large impact on the downtown area’s hotel supply in late 2012, it is expected that this new hotel will shift the dynamics in a positive direction as convention demand returns in force. Overall, higher education, government, business, and conventions remain firmly in place in Columbus, which should bode well for the city’s hotels in the near future.

Unemployment and office vacancy has been dropping in Columbus, the state capital and a major center for financial and healthcare services in Ohio. Hotel occupancy hit a record high in 2012, and average rates are gaining ground. %%ViewCount%% Views 2 Comments
Share:
Subscribe To Newsletter