Portland, Oregon’s reputation rests on its well-known microbreweries, cuisine, culture, city parks, innovative mass transient system, and arts and music scene. The city’s location relative to others in the Pacific Northwest, along with its relatively low energy costs and expansive marine-shipping facilities, support Portland’s economic network of high-tech, transportation and distribution, manufacturing, and professional services industries. These industries, together with strong tourism and natural attractions, help support a healthy lodging market in Portland. 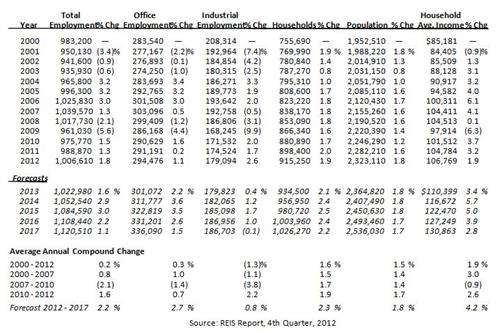 The market has realized gains in total employment annually during the historical period, with the exception of the dot.com bust at the turn of the millennia and the recession that began in late 2007. Industrial employment has experienced the largest changes, concurrent with the hire and layoff cycles typical of the manufacturing and distribution industries. Households and population have grown consistently over the past decade, noting a 1% to 2% change from 2004 through 2012. Employment, household size, and population are forecast to grow modestly through 2017. Household average income is forecast to grow at rates that are more significant as higher-paying jobs in the technology industry, on which the Portland market heavily relies, are expected to increase in the coming years.
Unemployment statistics for Multnomah County, the Portland MSA, the state of Oregon, and the U.S. as a whole are illustrated in the table below. 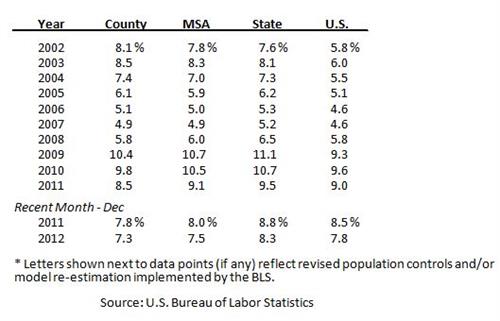 Unemployment in the Portland MSA remains well above pre-recession levels, though job growth has continued to increase, most notably in the manufacturing and construction sectors; the professional services and leisure and hospitality sectors have also realized job growth. Intel leads the way for growth in the manufacturing and construction sectors as it continues to expand. Intel’s expansion of its D1X facility is also underway; the company announced in October of 2012 that it would double the size of its investment to $6 billion, expanding the facility to 2.5 million square feet. Nike is planning to invest $150 million in a capital project that will reportedly add 500 jobs in the Portland suburb of Beaverton. In addition, there has been enhanced activity at local port facilities, and construction of residential developments in Portland has realized an increase.

The office lease-rate recovery that started in 2011 was slow to grow in 2012. Office vacancy was lowest in the Central City and Eastside area, while Beaverton/Sylvan noted the highest vacancies in the greater market.

The following table illustrates a trend of office space statistics for the overall Portland market. 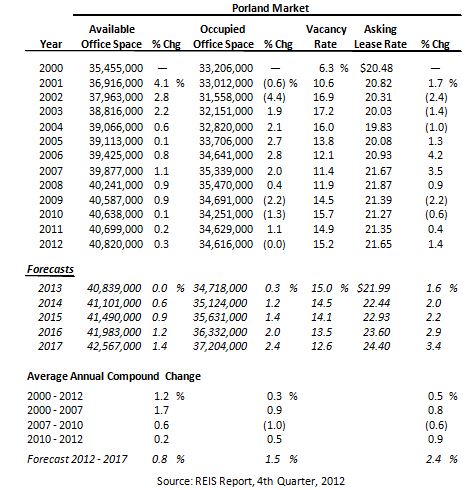 The greater Portland office market realized net absorption of only 117,000 square feet in 2012. The only construction completed during the past year was the 121,000-square-foot, single-tenant project at Cascade Station for the FBI. Construction remains subdued, with only three competitive general-purpose office projects that have broken ground; two of these have been put on hold indefinitely. The redevelopment of the 19,400-square-foot American Brush Company building should be completed in November of 2013. Available office space is forecast to increase only minimally; the decline in vacancy is therefore expected to continue, although not quite to levels seen during the peak years of 2007 and 2008. Average lease rate is forecast to increase modestly as the local economy improves and vacancy declines.

Hotel Construction Update
According to HVS research, several new hotels are currently in the pipeline:

No hotels are currently under construction in the greater Portland market; the proposed projects mentioned above are in the early planning phases. While new hotels are expected to enter the market in the coming years, the percentage increase to the overall market supply will be minimal.

Outlook on Market Occupancy and Average Rate
No new supply has entered the Portland market since 2008, and although the area was impacted by the effects of the recent recession, the lack of new supply has assisted hoteliers in regaining lost occupancy. Portland area hotels were able to reach pre-recession occupancy levels by late 2011; however, average rate has yet to exceed pre-recession levels. Market participants are hopeful that the 2013 summer season will allow hoteliers to recoup average rate losses and achieve new average rate highs. The market has now essentially reached the occupancy level ceiling, and although modest gains are anticipated, RevPAR growth will likely be driven by significant increases in average rate.

Recent Hotel Transactions
The following table summarizes hotel transactions in the state of Oregon over the past two years.

REVIEW OF HOTEL TRANSACTIONS
CLICK HERE FOR A LARGER VIEW

The four most recent sales in the Portland market are the most notable, as the Hilton and Hotel Vintage Plaza are two of the premier properties in Downtown Portland; the Hotel Vintage Plaza achieved a significantly higher RevPAR, accounting for the price-per-key difference. It should also be noted that the Hotel Vintage Plaza sold along with its sister property in Seattle in 2012. The Governor Hotel was an REO transaction, and therefore not equitable to the other two since it was a distressed sale. Kimpton Hotel & Restaurant Group LLC acquired the RiverPlace Hotel from Larkspur Hotels; this transaction represented the second-highest price-per-key sale of 2012 in Portland.

Brokers’ Outlook
According to HVS broker interviews, current cap rates for limited-service hotels in Portland range from 8% to 9%, depending on the quality and location of a given property. Area brokers report that, dependent on circumstances, now is the time to buy limited-service hotels in Portland. Select-service hotels are selling at similar cap rates, and brokers report that the market presently favors the purchase of these assets as well. Full-service hotels would be selling for a lower rate, and although there is significant interest from potential buyers to enter the Portland full-service market, little to no inventory is available.

Conclusion
The Portland hotel market has continued to show improvement from the depths of the recent recession. Hotels transactions have increased slightly, with four notable sales occurring in 2012. Occupancy and average rate are anticipated to continue to improve as the area economy strengthens; the lack of new supply within the immediate future is also expected to increase RevPAR. Overall, the near-term outlook for the Portland hotel market remains optimistic.