$2.5 billion in projects are under development across multiple economic sectors, including tourism, in St. Louis. The return of commercial and leisure demand, along with rising average rates, should speed recovery for the city’s hotels.

Over the past few years, the St. Louis hotel market has maintained its status as one of the most stable in the U.S. A strong, diversified, and growing economic base is generating unprecedented market demand. Occupancy is at its highest level in more than a decade, and average rate is steadily approaching its pre-recession peak. Supply growth appears to be in check, even while selective new hotel construction is reemerging as a viable investment option. The transaction market has therefore remained steady, and hotel investors continue to realize both value-add and investment-grade acquisition opportunities.

St. Louis’s well-established and diverse economy helped it weather the recent recession and re-enter a period of expansion and recovery. The following table illustrates historical and projected employment, population, and income data for the St. Louis market.

HISTORICAL & PROJECTED EMPLOYMENT, HOUSEHOLDS, POPULATION,
AND HOUSEHOLD INCOME STATISTICS
The projected growth in employment and average household income, which had been stagnant or in decline over the past four years, largely comes from encouraging signs in the overall St. Louis economy. Healthcare companies like Express Scripts and Centene continue to expand, and financial firms such as Scottrade, Stifel Nicolaus, and Edward Jones have noted significant growth. Progress in the manufacturing and consumer goods sectors, both hard hit by the recession, includes a major expansion of the region’s General Motors assembly plant. St. Louis’s growing bioscience sector, anchored by such companies as Monsanto, Pfizer, and Sigma-Aldrich, also comprises the world’s largest independent plant-science-research institute, the Donald Danforth Plant Science Center.

Vitality in these sectors has helped reduce unemployment in St. Louis, as illustrated in the following table. 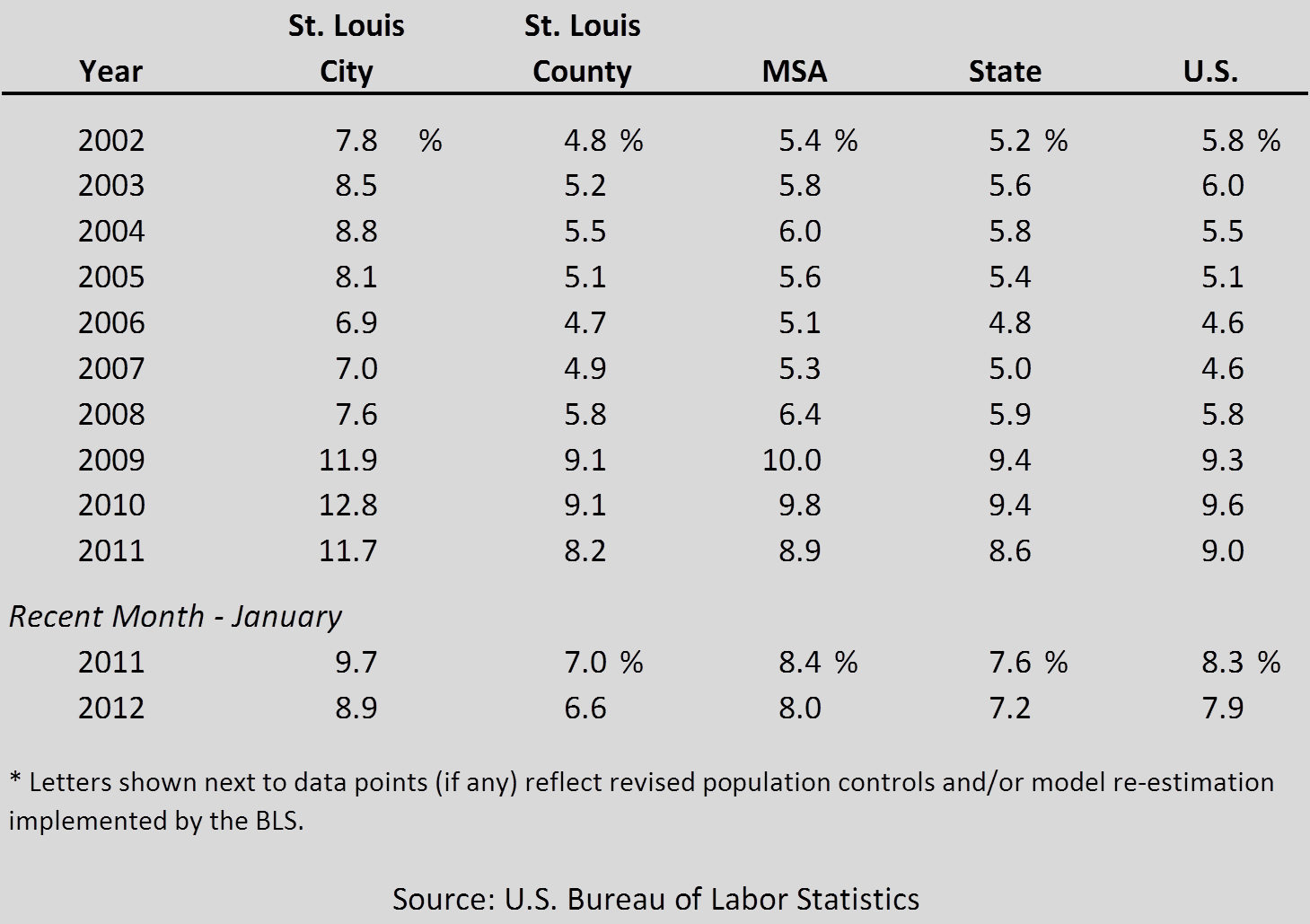 Major projects completed in recent years include new headquarters towers for Centene and Edward Jones, as well as redevelopments of the Mercantile Exchange, Central Library, Peabody Opera House, and Metropolitan Building, all of which are Downtown. The 13 projects summarized in the table below represent more than $2.5 billion in investments in St. Louis’s economy.

These projects range from tourism to transportation, with five slated to open by year-end—encouraging news for the St. Louis market in the near term. Larger-scale, longer-term developments on the drawing board include the Northside Regeneration initiative, the Midwest China Hub initiative, the Gateway Arch grounds redevelopment, and the BJC HealthCare Campus Renewal project.

Commercial travelers form a significant base of demand for the region’s hotels. As such, the concentration and characteristics of the various office submarkets in the region act as strong indicators for the makeup and strength of the corresponding hotel submarkets. The table below illustrates recent statistics for office submarkets.

The Downtown submarket offers the most office space and the largest buildings; however, the vacancy and lease rates are weaker than most of the other submarkets. Similarly, Downtown offers the highest number of hotel rooms concentrated in a number of large full-service properties, and the hotel submarket has generally underperformed in terms of occupancy and average rate levels. On the other hand, the Clayton submarket has a more limited supply of office space but is able to command the highest rents and register one of the lowest vacancy rates. This correlates directly to the hotel submarket, which benefits from similar supply, demand, and rate characteristics.

The Highway 40 Corridor office submarket offers a significant amount of office space spread out over several miles of highway; this submarket as a whole is relatively strong, second only to Clayton in terms of rates and boasting the lowest vacancy of any other St. Louis submarket. These characteristics extend to the hotel market as well, which generally registers relatively strong occupancy and average rate given the high caliber of the office space and corporate tenants in the area. The Olive/Westport office market is more concentrated but suffers slightly from above-average vacancy rates; tenants range from a few major corporate headquarters to a number of smaller semi-industrial operations.

The remaining office markets are generally not as dense and are spread out geographically, with office and hotel trends largely dictated by the characteristics of individual communities and nodes of development.

Historical trends and forecasts related to overall office space in the St. Louis market area are detailed in the table below. 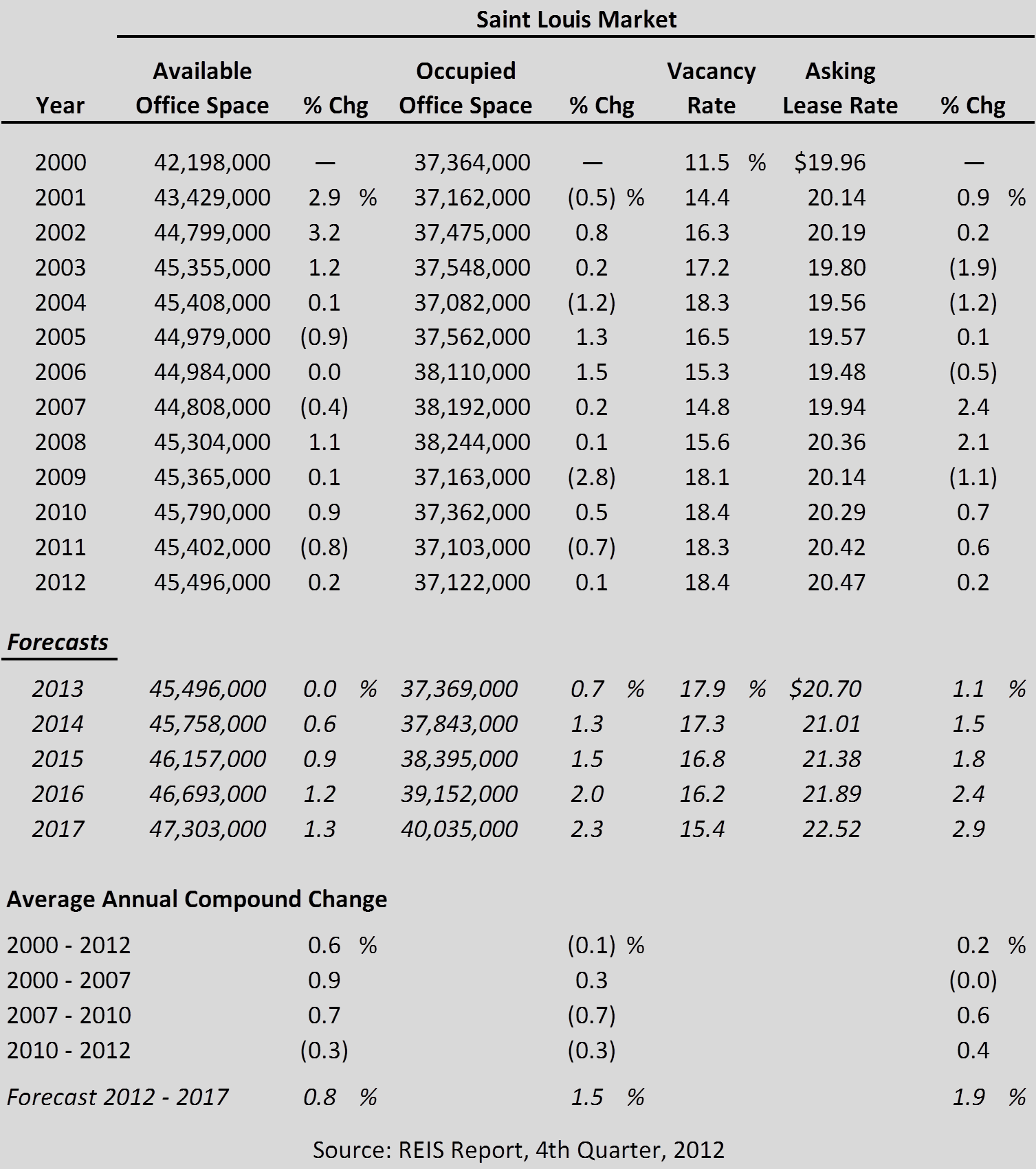 Office supply outpaced demand early in the last decade, giving rise to higher vacancy rates in St. Louis. The recent recession worsened the situation, and vacancy has remained elevated since 2009. Now that the economy is recovering, modest increases in demand for office space are expected going forward, and the market is anticipated to surpass the previous peak in occupied space by 2015.

Many of the companies named above, along with regional associations and organizations, also serve as major generators of meeting and group demand for hotels. Meeting planners continue to face budget constraints and scrutiny of large events held at hotels. St. Louis enjoys a reputation as a relatively low-cost meeting destination, which has helped offset the negative stigma associated with extravagant meetings and group events. This reputation has also bolstered hotel demand from value-conscious transient-leisure sources throughout the Midwest.

The America's Center Convention Complex, which includes the St. Louis Executive Conference Center and the Edward Jones Dome, is the area's primary meeting venue, offering more than 500,000 square feet of prime exhibit space. The Edward Jones Dome, a convention facility and stadium, seats over 64,000; a $48-million renovation of the convention center was completed in 2012. Convention center statistics from 2005 through 2012 are illustrated below.

The opening of the Renaissance Grand Hotel adjacent to America’s Center helped create a rise in room nights in 2006 and conventions in 2006 and 2007. Room nights and conventions fluctuated until 2012, at which time the number of conventions increased significantly and booked room nights reached a peak for the period shown. In 2012, America’s Center also hosted Meeting Professionals International, whose members plan nearly 700,000 meetings each year; officials expect that this event will help drive greater numbers of events and attendees to the facility going forward. These positive trends are anticipated to continue through 2013, and several major events have already been booked through 2016, including conventions for the International Brotherhood of Electrical Workers and the National Recreation and Park Association.

HVS research revealed ten hotels in the development pipeline, as summarized in the following table.

Even with the projected entrance of these new hotels over the next several years, the percentage increase to the overall market supply will be minimal. 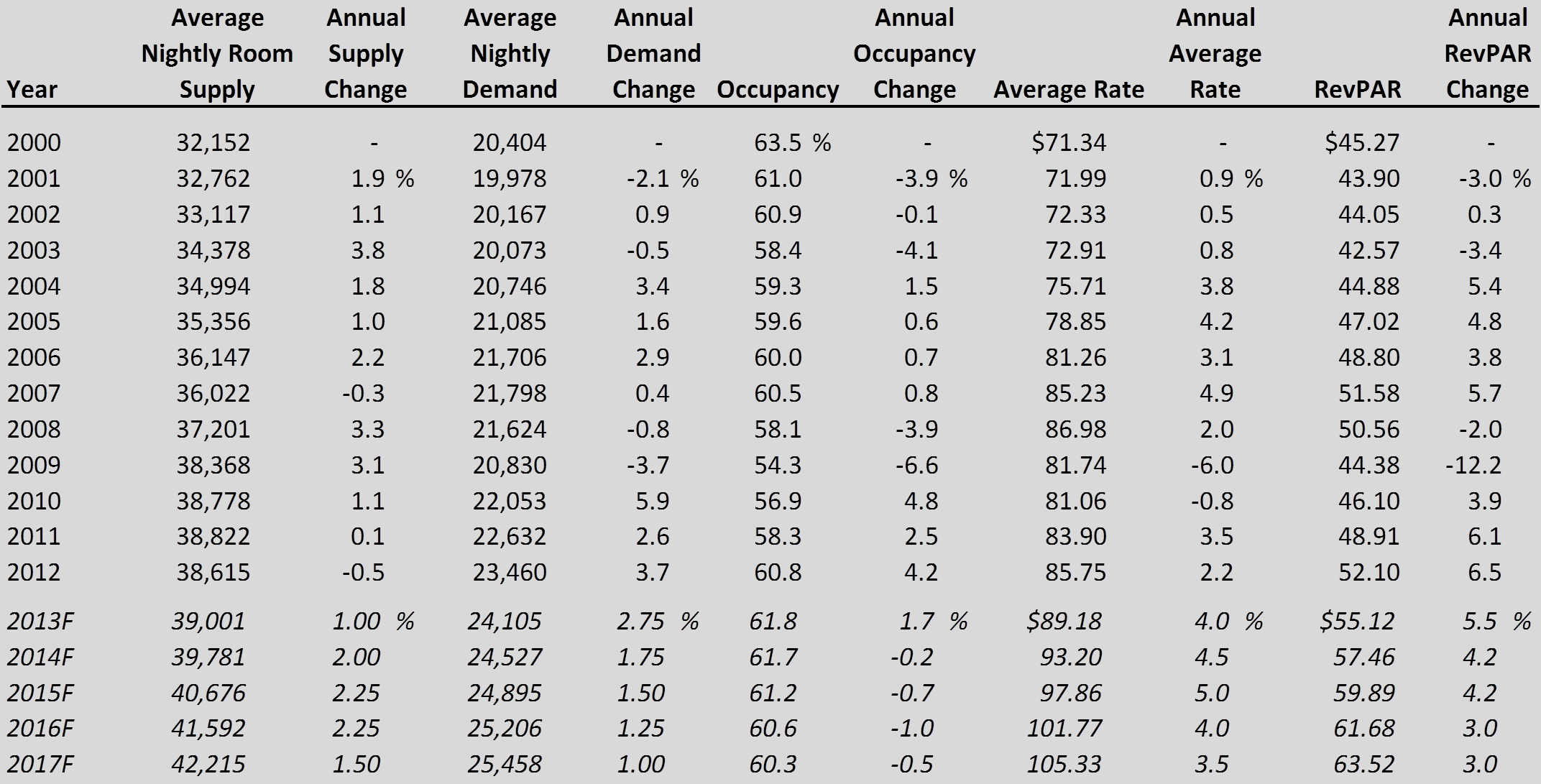 Four new full-service properties, representing 1,655 new rooms, opened between 2001 and 2005 in Downtown St. Louis, and the entrance of new supply market-wide caused some fluctuation in occupancy. Occupancy and demand levels in Greater St. Louis peaked in 2007, followed by two years of strong supply growth combined with recessionary demand contractions that resulted in occupancy declines. Area hoteliers responded to this trend by offering rate discounts, leading to a decline in average rate in 2009 and 2010 and a decline of more than $7 in RevPAR. Even so, this decline was more modest than the drop-offs experienced in many other markets across the country.

Supply growth has slowed significantly since 2010, with a net decline in rooms available in 2012. Demand has rebounded and occupancy has made a strong recovery, with 2012 marking the highest level since 2000. Average rates have recovered as hoteliers have eliminated rate discounts for most transient travelers, resulting in steady RevPAR growth during the last two years.

The development pipeline is slowly gaining momentum as several projects are now under construction and more are on the drawing board or seeking financing; however, construction financing remains relatively conservative and scarce. As such, supply growth is expected to remain in check in the near future. Occupancy is anticipated to continue to grow in 2013, before subsiding somewhat as new hotels come online and hoteliers seek RevPAR growth through rate increases. Average rates should continue to increase at a healthy pace now that demand levels have recovered. The recovery of transient demand should help to extend booking windows and provide more pricing power for meeting and group business going forward.

The following table summarizes hotel transactions in the St. Louis area since 2010.
REVIEW OF HOTEL TRANSACTIONS

The market has experienced a steady pace of deals during the last few years across a variety of market segments and acquisition opportunities. The sales represent acquisitions of stabilized assets by institutional investors, as well as repositioning opportunities for entrepreneurial owner-operators.

Brokers active in the hotel transaction and finance markets in St. Louis note that St. Louis remains a relatively stable market with limited risk of new supply; ironically, the market’s stability presents less growth potential than other metro areas with more robust and dynamic economies. The market carries a reputation for solid demand fundamentals, particularly in those suburban submarkets with strong employment bases, such as Clayton and Chesterfield. On the other hand, the market is perceived as relatively rate-sensitive, particularly with respect to the Downtown submarket, which suffers from an oversupply of large, full-service hotels. In general, brokers reported that the market presents attractive capitalization rates when compared with those of first-tier markets and gateway cities. As such, there are opportunities in St. Louis for national investors seeking to diversify their portfolios with more stable assets, as well as for entrepreneurial investors looking to take advantage of specific repositioning opportunities.

The St. Louis hotel market has proven resilient during the last real estate cycle, now moving through the recovery phase and becoming poised for a period of steady growth. The market offers strong opportunities for investors seeking stabilized assets with strong cash flows, as well as select opportunities for new developments and the repositioning of existing assets. Overall, improvements to the national economic climate, and resulting increases in hotel revenues and demand, should position the St. Louis hotel market for a period of growth over the near term.

As the HVS leader for the Heartland region, Dan McCoy, MAI, oversees the firm's St. Louis, Nashville, and Omaha offices. A Managing Director and Senior Partner at HVS, Dan is a recognized thought-leader, collaborative advisor, and invaluable resource for the Heartland's lodging industry. He combines a deep understanding of regional hotel markets with strong analytical thinking to provide a wide variety of clients with up-to-date hospitality intelligence and tailor-made solutions. Dan is a Designated Member of the Appraisal Institute (MAI) and a certified general appraiser. Contact Dan at +1 (970) 215-0620 or [email protected].

$2.5 billion in projects are under development across multiple economic sectors, including tourism, in St. Louis. The return of commercial and leisure demand, along with rising average rates, should speed recovery for the city’s hotels. %%ViewCount%% Views Comments
Share:
Subscribe To Newsletter