Employment in Oklahoma City stands far ahead of the nation, and activity generated by agriculture, energy concerns, and the military has kept the economy going strong. What has this meant for recent hotel performance, supply, and transactions? 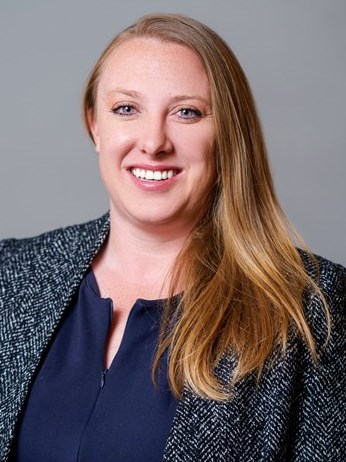 Long one of the economic and cultural wellsprings of America’s heartland, Oklahoma City has noted some strong accomplishments of late. Forbes recognized Oklahoma City as the “Most Recession-Proof City” in early 2008, just before the worst effects of the recent recession had taken hold. The prediction seems to have proven true, as the “On Numbers Economic Index,” a monthly measure of the economic health of 102 U.S. metropolitan areas, ranked Oklahoma City first in the nation for five out of the last seven months as of February of 2013. Federal, state, and local government; military bases; energy; aviation and aerospace; higher education; bioscience; high technology; agriculture; and manufacturing across Greater Oklahoma City’s ten surrounding counties form a diverse, fertile foundation for economic activity and hotel demand. The city is also becoming a bigger player on the convention, tourism, and hospitality fronts, priming the area’s hotel industry for growth in the coming years.


The Oklahoma City area benefits from a well-established, diverse, and relatively stable economy that helped it weather the recent recession. Employment and income levels decreased significantly during the worst of the downturn in 2009 but recovered quickly. The Oklahoma City headquarters and operations of Fortune 500 companies, such as Chesapeake Energy and Devon Energy, have increased both office employment and average income in the city.

While education, health care, and government still form its foundation, the diversification of Oklahoma City’s economy into areas such as oil and gas production has broadened the economic base and brought higher-paying jobs. Boeing moved hundreds of engineering jobs from Wichita to Oklahoma City in 2012, and Continental Resources relocated its headquarters to Oklahoma City last year. The pro-business environment, low cost of living, and value that Oklahoma City brings to businesses should contribute to continued economic growth.

The following table illustrates unemployment statistics for Oklahoma County, the Oklahoma MSA, the state of Oklahoma, and the U.S. from 2002 through 2011. 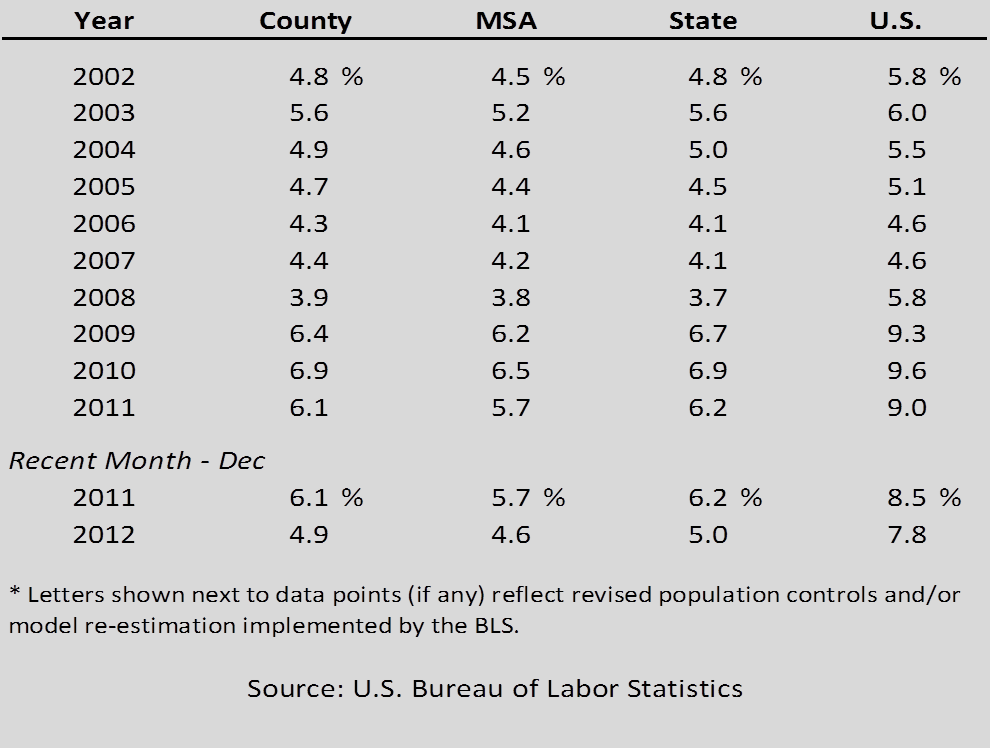 Recent measures aim to push Oklahoma City’s economy past pre-recession levels. Agricultural commerce in the Oklahoma City area has helped stabilize the local economy, as has the presence of military bases and local and state government operations; the city is the state capital and county seat, and Tinker Air Force Base is Oklahoma’s largest single-site employer. The Will Rogers World Airport is fewer than six miles from the downtown center, and a strong office market also helps to facilitate business activity in Oklahoma City. The Federal Aviation Administration (FAA) Mike Monroney Aeronautical Center, also located in Oklahoma City, creates a large base of hotel demand, especially in the Oklahoma City West area near the airport. Because of this government and military presence, employment related to aerospace and aviation is strong and growing, and Oklahoma City’s overall unemployment levels register well below the national average.

Furthermore, the emergence of wind energy projects and the stability of oil and gas exploration in Oklahoma have provided major sources of revenue and employment in Oklahoma City. Devon Energy opened its 50-story, $750-million World Headquarters Tower in October of 2012, and the $100-million expansion and redevelopment of SandRidge Energy's headquarters is scheduled for completion in 2014. Chesapeake Energy also continues to expand its campus in the northwestern section of the city. With infrastructure and abundant natural resources in place, Oklahoma City is well positioned for growth in alternative energy sources such as wind, solar, and compressed natural gas, which should provide for healthy levels of employment in the future.

The city’s available office space is concentrated in the Central Business District (CBD) submarket, though the Midtown submarket enjoys a very low vacancy rate and the highest average asking lease rate in the overall market.

The following table illustrates a trend of office space statistics for the overall Oklahoma City market. 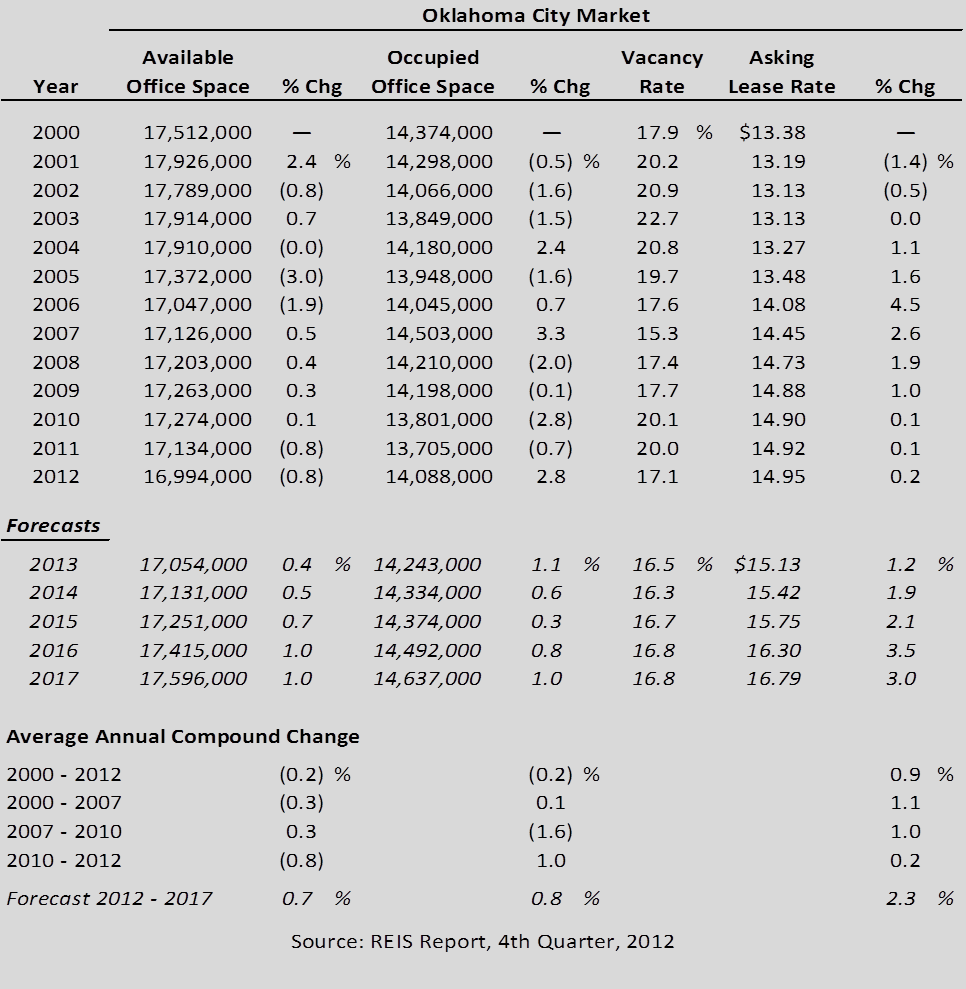 Several key developments in Oklahoma City’s office market have occurred within the past year. In 2012, Continental Resources moved into much of the Class A office space previously occupied by Devon Energy, and at the end of the third quarter, Class A vacancy stood at just 12.9%. While Downtown Oklahoma City contains the most inventory, much of the available space is limited to Class B or C space; although, several rumored redevelopment projects would convert much of this space to Class A. Overall, new construction is very limited. While several large firms, such as SandRidge Energy and Chesapeake Energy, expand their owner-occupied buildings, the growth of competitive space has been subdued. Therefore, vacancy is anticipated to decrease and asking lease rates are expected to increase through 2017.

Strong occupancy, rate recuperation, and increasing demand in Oklahoma City have encouraged new hotel projects throughout the metro area. According to HVS research, at least nine new hotels (in addition to hotels in the preliminary planning stages) are currently in the pipeline for Oklahoma City, including:

While many new hotels are expected to enter the market in the coming years, the percentage increase to the overall market supply will be moderate; however, there will be a large increase in the overall rooms available in the downtown area. Depending on how quickly this supply enters the market, hotels in other submarkets may lose occupancy as demand moves Downtown. These proposed hotels complement a handful of other projects in various stages throughout the downtown area. A larger convention center hotel is anticipated to open in conjunction with the new convention center in Downtown Oklahoma City in late 2018, creating a substantial boon for the city’s lodging industry and reputation as a destination city for meetings and groups.

As with the city’s overall economy, lodging trends in Oklahoma City are solid. As of August of 2012, Oklahoma City’s hotel occupancy growth ranked second only to Oahu, Hawaii, and the industry’s marked growth since the recession is even more impressive given that local occupancy levels took a relatively minor hit compared with the plunge seen in other metropolitan markets. High-quality new supply entered the downtown submarket in 2007 and 2009; this supply was quickly absorbed and bolstered the downtown lodging market. Overall, citywide occupancy has been very strong, with occupancy bracketing the 70% mark over the past five years. Average daily rate growth for Oklahoma City hotels began to slow in 2008, and rates declined until early 2010. Rates finally began to rebound as new supply was absorbed in 2012.

Despite all the proposed new supply that is expected to enter the Oklahoma City area over the next several years, occupancy is anticipated to remain strong or decrease only slightly depending on how many hotel projects come to fruition. There is a significant amount of unaccommodated demand in Oklahoma City, which this new supply is expected to satisfy; however, the well-timed entrance of these new hotels will be crucial to the potential impact on the overall market. The entrance of higher-rated hotels should also allow hotels in the market to increase their rates.

The following table summarizes hotel transactions in the state of Oklahoma since March of 2010. 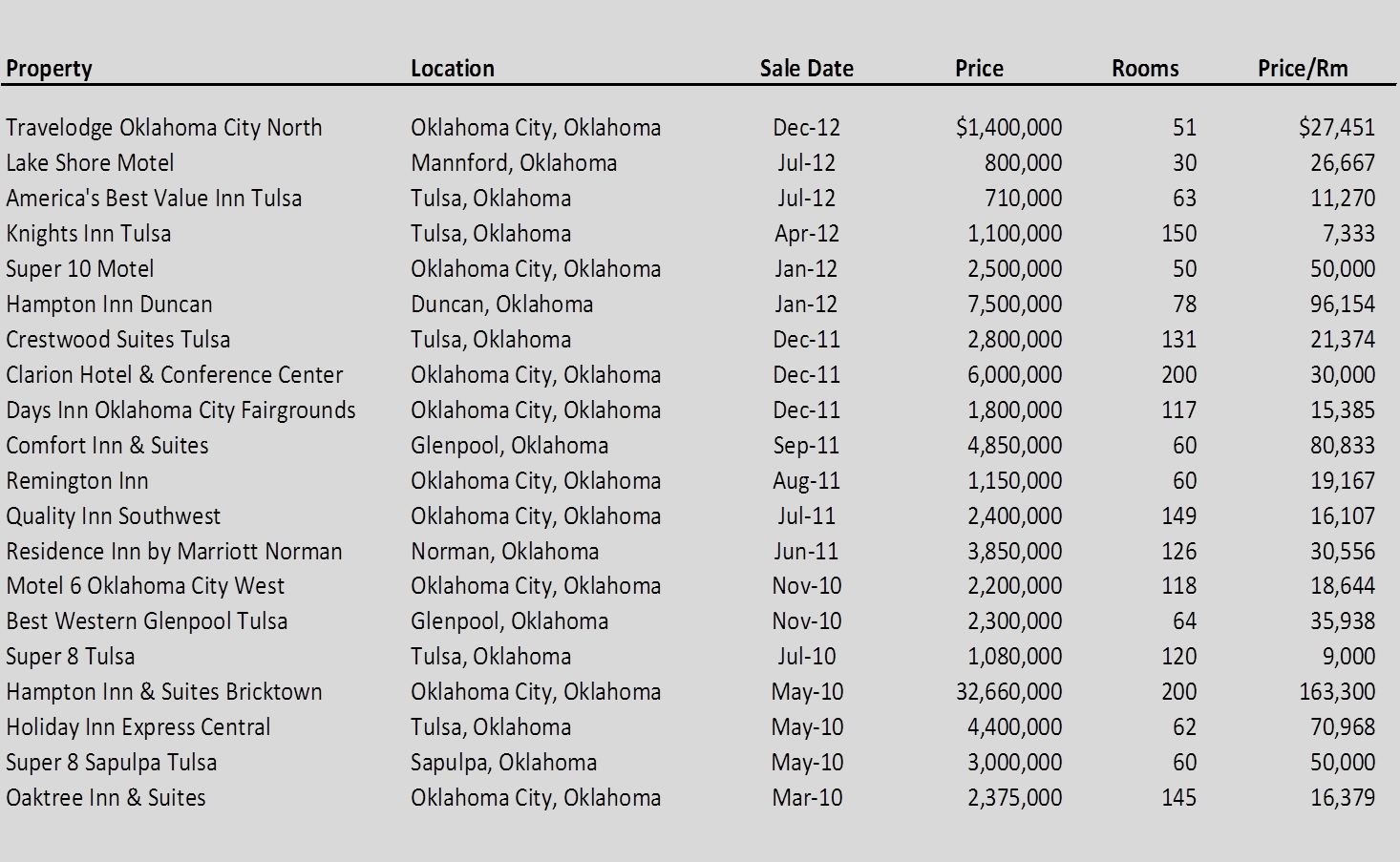 The sales across the Oklahoma City market have ranged from $163,000 down to $15,000 per key, with pricing highly dependent on historical operations, location, and product type, as well as whether the property was under financial distress.

Oklahoma City’s endurance of the recession and its economic growth since can be counted in the number of new business relocations, expansions, and projects, many of which are set to extend over the next several years. These projects notably include new hotels, and balancing the addition of hotel supply with projected demand growth will be extremely important to the health of the market moving forward, especially with respect to maintaining occupancy and average rate increases. The new convention center hotel and associated improvements have the potential to take the Oklahoma City hospitality industry to the next level, and new, well-advised, well-timed hotel projects should contribute to and benefit from the city’s already strong, diverse economy.

McKenna Luke, MAI, a Senior Vice President with HVS, resides in New Mexico. McKenna earned her bachelor's degree in Hospitality Management and her MBA with a concentration in Finance from University of Denver. She holds a certified general appraisal license and is a Designated Member of the Appraisal Institute (MAI). McKenna’s background in hospitality spans from hotel operations to advisory roles related to full-service hotel acquisitions and new developments. Her expertise includes small independent motels, extensive resorts, full-service metropolitan hotels, and historic conversions. Contact McKenna at +1 (303) 704-2636 or [email protected].

Employment in Oklahoma City stands far ahead of the nation, and activity generated by agriculture, energy concerns, and the military has kept the economy going strong. What has this meant for recent hotel performance, supply, and transactions? %%ViewCount%% Views 8 Comments
Share:
Subscribe To Newsletter