New business partnerships, investments in high-tech companies and facilities, and rising hotel demand and average rates point toward a path of growth for Lansing’s economy and hotels.

A seat of state government affairs, higher and vocational education, and manufacturing in the Midwest, Lansing is gaining notice for some of its more emerging industries, as well as those, like hospitality, that are undergoing evolution. The city of Lansing is Michigan’s state capital and the core of the greater metro area, known as “Mid-Michigan.” Lansing’s diverse economic makeup comprises institutions like Michigan State University; investments in cutting-edge technology; and established insurance, healthcare, and manufacturing companies. Lansing’s growing economic base placed the Lansing-East Lansing area in the second-highest spot for Michigan, according to the Milken Institute’s “Best-Performing Cities 2011” rankings. The lull draped over the city appears to be pulling away, forging new opportunities for Lansing, its residents, visitors, and businesses, including hotels. 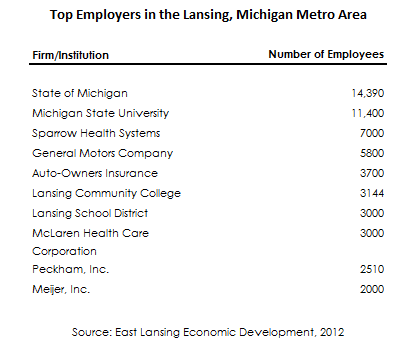 Michigan State University (MSU) received a boost in 2008 when the U.S. Department of Energy selected the world-renowned research university as the site for the Facility for Rare Isotope Beams (FRIB). In September of 2012, the MSU Board of Trustee’s approved an additional $55 million that will allow construction to commence. The project, scheduled for completion in 2021, is expected to contribute one billion dollars to the Lansing economy and add 5,000 temporary construction jobs and 400 permanent jobs over the course of its construction. The new facility will be state of the art and one of a kind, attracting scientists, engineers, researchers, and commercial enterprises that allow Lansing’s technological sector to forge a competitive edge.

The Eli and Edythe Broad Art Museum, designed by renowned architect Zaha Hadid, opened in December of 2012. The museum’s historic collections include pieces and artifacts from the ancient Greek and Roman periods through the Renaissance and Modern eras. Local officials project that the museum will attract over 100,000 visitors in its first year, many from outside the state, which should provide strong room-night generation for Lansing hotels.

Lansing’s Capital Region International Airport received U.S. Port of Entry status in January of 2008, and was designated as a Foreign Trade Zone in August of 2009. This led to the formation of Port Lansing, which further promotes international commerce in the region. Port Lansing was created as an alternative to larger or more distant hubs such as Detroit and Chicago, allowing importers and exporters to clear U.S. Customs locally with fewer hassles and delays. The Global Logistics Center, a $6-million, 48,000-square-foot cargo warehouse and cross-docking facility, opened in October of 2012, and is the first of an expected $20 million in total investments for Port Lansing. The Global Logistics Center will serve as a short-term storage facility, staging center, and a finishing ground for certain products requiring additional manufacturing. Finally, Michigan Governor Rick Snyder recently announced that Ford Motor Company, Chrysler, and several other major automotive manufacturers have joined forces to promote and expedite commerce between Lansing and other Michigan automotive manufacturing and distribution centers, a welcome development that demonstrates the push to revive the region’s auto industry.

The Lansing Regional SmartZone (LRSZ), established to fuel growth in the local technology business sector, has proven widely successful. Lansing was recently ranked the sixth-best metropolitan area for high-tech job growth in the nation, owing to the LRSZ and cooperative efforts such as the Technology Incubation Center (TIC), which focuses on developing Michigan State University Information Technology spin-offs, high-tech ventures, and local entrepreneurs.

Lansing has also become an emerging player in high-tech research and development, as well as home to several growing companies in the advanced sciences. Washington, D.C.-based Emergent BioSolutions operates a research facility in Lansing, where it manufactures the only anthrax vaccine available in the country. In 2011, the company secured a five-year, $1.25-billion contract to provide the vaccine to the federal government, and in May of 2012, Emergent BioSolutions began the first phase of a $108-million expansion to its Lansing campus.

Lansing-based Niowave is one of the world's leading producers of superconducting particle accelerators, which are used in research related to everything from CAT scans to naval weapons. In 2012, the company opened a new $10-million research facility that will allow the company to develop larger and more powerful accelerators.

Projections show Lansing’s technology sector expanding by 16.2 percent between 2011 and 2020. These incubators and companies, along with the FRIB project at nearby MSU, are helping to pave the way for future technology growth in the region.

Lansing’s four lodging submarkets are bookended by clusters of generally limited-service hotels on the east and west sides of the metro area; these hotels cater to demand from the state government and transient travel to MSU. The East Lansing hotel submarket, near the MSU campus, includes several full-service hotels, along with a number of extended-stay and budget properties. The fourth submarket, located on Lansing’s northern side, is also dominated by limited-service brands; its location near both Downtown and MSU has allowed these hotels to pull business from all over Lansing. Additionally, this submarket benefits from proximity to the growing Eastwood Towne Center.

State government, local employers, and Michigan State University represent the primary sources of hotel demand for the Lansing market. The recent recession caused market occupancy to decline in 2008; demand continued to wane while hotel supply increased with the opening of the Holiday Inn Express in East Lansing in 2009. Demand began to rebound in 2010, as local employers, including those in the auto industry, found their footing; in 2011, the new supply was absorbed and occupancy returned to pre-recession levels. Hotel occupancy and demand in Lansing continued to increase in 2012, albeit at a more modest pace than in the previous two years.

After two years of growth, average rates in the Lansing hotel market declined modestly in 2009, followed by a minimal decrease in 2010; however, these declines were relatively limited in comparison to many hotel markets across the country that were more severely impacted by the recession. Average rates for Lansing hotels rose above pre-recession levels in 2011, and rate continued to show healthy month-over-month increases during 2012.

Local employers within the insurance, healthcare, and auto industries have fueled much of the demand growth in Lansing, and growing technology firms are providing a new source of hotel demand for the market. Hence, hoteliers have begun shifting focus from occupancy growth toward stronger rate increases. A limited amount of new supply is expected in the Lansing market over the next several years. The Hampton Inn Lansing is anticipated to change brands, with a newly constructed Hampton Inn to be located nearby. Additionally, there is a planned Hyatt Place in the Eastwood Towne Center, located along Lake Lansing Road, which will add 125 rooms to the market once complete.

Lansing’s recent economic growth and the promise of future projects have benefited area hotels with more demand and higher rates. The presence of established insurance and healthcare companies, as well as an emerging, diversified technology sector, has established an economic balance in Lansing that has helped make the market tough to upset, even in the recent recession. Furthermore, Lansing’s presence as an emerging global community has been fueled by MSU and its expanding international enrollment, which reached 3,631 students for 2011, of which 3,000 were from China. The growing international presence has local leaders seeking new ways to integrate these students into the community and economy. This drive toward local, regional, and international growth should help sustain Lansing’s overall economy and provide opportunities for growth in the area’s hotel industry.