International attention falls on Des Moines, Iowa every four years as the epicenter of the presidential primaries, but the city hosts an unsung stable of big businesses that consistently generate demand for area hotels.

Situated in the heart of America’s heartland, Des Moines, Iowa pulses with one of the most diverse and active economies in the Midwest. The Iowa caucuses generate a flourish of hotel demand and economic activity during presidential primaries, and financial firms, healthcare entities, food chains, high-tech companies, and conventions pull in visitors throughout the year. The following gives an overview of Des Moines’ chief economic drivers and the demand they generate for area hotels.

The most recent Iowa caucuses put all eyes on the Heartland state, bringing in an estimated 1,500 members of the press and generating about $17 million for the economy of Greater Des Moines, including money spent at hotels, restaurants, and other businesses. Apart from being a central stop on the caucus circuit, Des Moines has gained recognition for its business-friendly atmosphere. In July of 2011, Forbes called Des Moines the “Best City for Young Professionals,” and in March of 2012, Forbes named the city the second-best place in the nation for jobs.

Many of these companies have been expanding their presence in the city with new office space, additional hires, and upgraded facilities. Insurance companies contributed an estimated $890 million in new investments and 7,200 new jobs between 1996 and 2010, making Des Moines the third-largest insurance center in the world, following London (England) and Hartford, Connecticut (USA). Blue Cross Blue Shield commissioned a new facility as part of the revitalization of Downtown Des Moines. The $190-million, 852,000-square-foot corporate office development was completed at the end of 2010 and received a LEED Platinum certification. Aviva USA also completed construction of its $135-million national headquarters office in West Des Moines in August of 2010, bringing some 400 jobs to the local economy.

The tech industry has also been expanding into Des Moines. The Microsoft Data Center is under construction in West Des Moines; the first phase of construction on the $200-million project was completed in 2011, and the facility is scheduled to be operational by summer’s end. HP announced plans to expand one of its operations centers, a 408,000-square-foot facility near the Des Moines International Airport, by another 308,000 square feet by the end of this year, creating approximately 150 new jobs. Pioneer Hi-Bred (DuPont) is planning to expand its existing facility just outside of Des Moines in Dallas Center, as well as create a new research facility in nearby Johnston; renovations are also underway on one of the company’s greenhouse and research centers, with completion set for the end of 2014.

A low cost of conducting business and a cost of living roughly 10% below the national average make Des Moines attractive to residents and businesses. Des Moines’ economy slowed during the recent recession, though its pillars of finance and insurance kept unemployment levels from plummeting; unemployment peaked at 6.1% in 2010, compared with 9.6% for the nation. Comparative figures from 2011 and 2012 (February) indicate a downward trend for unemployment in the Des Moines metro area. The following table illustrates unemployment levels in Polk County, the MSA, the state of Iowa, and the nation as a whole. 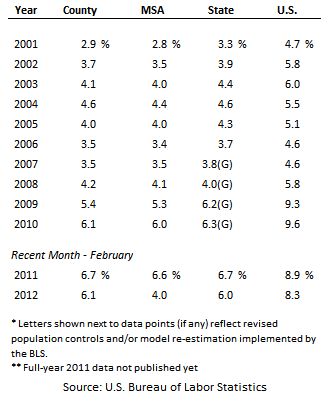 Conventions and trade shows also make a mark on the city’s economy and generate hotel demand. The Iowa Events Center (IEC) in Downtown Des Moines is a complex of four buildings: the Wells Fargo Arena, Hy-Vee Hall, the Polk County Convention Complex (the Plex), and the Community Choice Credit Union Convention Center, which underwent a renovation that concluded this past January. Major events at the IEC that draw visitors from out of town and out of state include NCAA-related sports and the Built Ford Tough PBR (Professional Bull Rider) series, as well as many concerts, trade shows, and conventions throughout the year. While meeting and group demand in this market is largely driven by corporations, SMERFE-related sources (Social, Military, Education, Religious, Fraternal, and Ethnic) make up a good portion of the group segment.

In concert with the inrush of economic activity brought on by the expansion of many businesses and facilities in Des Moines, the metro area’s hotel supply grew substantially between 2005 and 2008; the 1,518 new hotel rooms that entered the market increased supply by more than 20%. The recent recession slowed construction, with only three new hotels opening in the market since 2010. The following table shows recent supply increases in the Des Moines metro market. 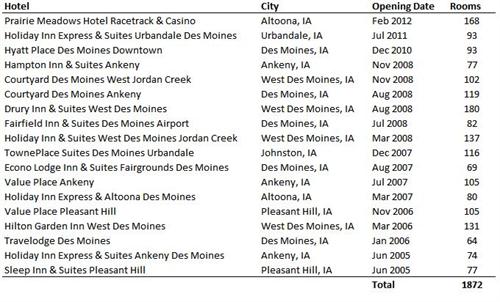 While hotel demand shrank overall during the recession, hotels benefitted from increased training initiatives among some of the largest companies. Local officials and hoteliers report that both occupancy and average rate have been recovering since mid-year 2010. With the continuing expansion of local companies, improving employment levels, and the lack of recent new hotel supply, occupancy levels across Des Moines are expected to grow over the next several years.

Des Moines has a history of emerging from hard times. Floods destroyed the city in 1851, and Des Moines was rebuilt into a new era of growth and prosperity. For several decades following World War II, the city went into a post-industrial economic decline, but has been successful in cultivating new people and business enterprises to populate and propagate its urban landscape. The effects of the recent recession have not been nearly so severe; still, businesses and hotels in Des Moines are bouncing back from the downturn and look to have ample room to grow over the next several years.

International attention falls on Des Moines, Iowa every four years as the epicenter of the presidential primaries, but the city hosts an unsung stable of big businesses that consistently generate demand for area hotels. %%ViewCount%% Views Comments
Share:
Subscribe To Newsletter