Is history repeating itself in the Reno market, or has the market diversified enough over the last decade to handle the influx of new supply? 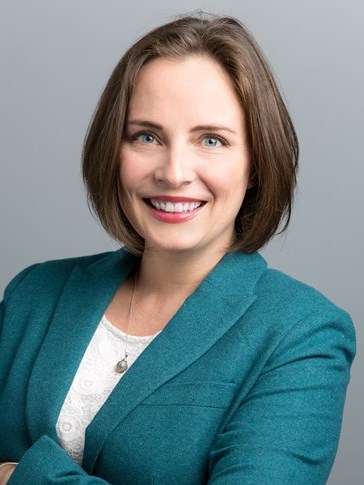 My first article about Reno was in 2008, just after I moved to the market. As I was falling in love with this unique city that was struggling from the Great Recession, local officials were working to diversify its economic base away from gaming. Occupancy and average rate (ADR) in the market not only struggled because of the decline in demand associated with the Great Recession, but this was further exacerbated by the addition of new supply continuing to enter the market after the recession had hit. In 2017, I wrote an updated article on the market focused on the growth that had occurred while the market recovered from the Great Recession and as the new supply was starting to enter the market. Fast forward to now, a record number of non-gaming hotels are proposed for development and entering the market, and developers continue to be interested in hotel development in the Reno market. Is there enough diversity in the marketplace to support all this new supply?

In the last decade, Reno’s population has increased over 18%, primarily driven by state and local officials’ efforts to diversify the economy, as well as the high quality of living offered at a relatively low cost (especially for those moving out of neighboring California). Numerous factors have accounted for the increase in population and the diversified economic base, with the most well-known factor being the construction of the Tesla Gigafactory, among many others, which was discussed in further detail in my 2017 article. The growth of targeted industry sectors including manufacturing, high tech, distribution, and transportation, as well as education and healthcare, has brought commercial and residential developers to the table that previously weren’t interested in investing in the Reno market.

The landscape of Reno is changing, and a more sophisticated approach is being taken to the development and redevelopment of specific Reno neighborhoods. For the first time since the 1980s, Class-A office space is in the process of being developed in Downtown Reno, some of the older 1940’s and 1950’s era motels are being demolished throughout the downtown core to make way for higher-density development, and companies such as Jacobs Entertainment, Reno Land Inc., Mark IV Capital, and Lyon Living are investing in major developments in the region. Institutional players are investing in the Reno industrial market, and new industrial developments are happening, as there is still plenty of land for development.

Market growth remains strong, with the only two concerns noted by local officials being low unemployment levels and a lack of housing, not unlike most other areas on the West Coast. The growth and economic health of the market has led to hotel occupancy and ADR increases reaching levels to drive hotel development in the market. The Reno-Sparks metro area includes 104 hotels with 19,467 guestrooms. The charts below illustrate the breakout of hotels and guestrooms in the five chain scales that currently operate in the market area. There are no hotels in the Reno-Sparks metro area that are considered part of the highest tier, luxury, and only one hotel, the Renaissance, falls into the upper-upscale chain scale. With the demolishing or adaptive reuse of a handful of the older motels, the economy chain scale has declined as a percentage of both guestrooms and hotels since 2017, while the bulk of new supply entering the market is categorized as upper-midscale or above.

The following tables illustrate occupancy and ADR trends in the region since 2006. Occupancy levels at non-gaming hotels started to recover in fiscal 2011/12, with occupancy increasing annually until fiscal 2015/16, at which time new supply growth outpaced demand growth. In fiscal 2015/16, the Hampton by Hilton West (86 units) and Courtyard by Marriott Downtown Riverfront (135 units) both opened, while the Whitney Peak Hotel expanded its room count by 127 units. As the market absorbed the new supply, occupancy started to increase again in fiscal 2016/17, and this trend continued through the end of fiscal 2018/19. Average rate in the market has increased annually since 2012/13, primarily due to strong demand growth combined with high-quality new supply entering the market.
Non-Gaming Hotels Continue to Achieve Highest Occupancy in Reno’s Metro Area

Source: RSCVA
Below is a snapshot of recently opened and proposed new supply in the Reno market. 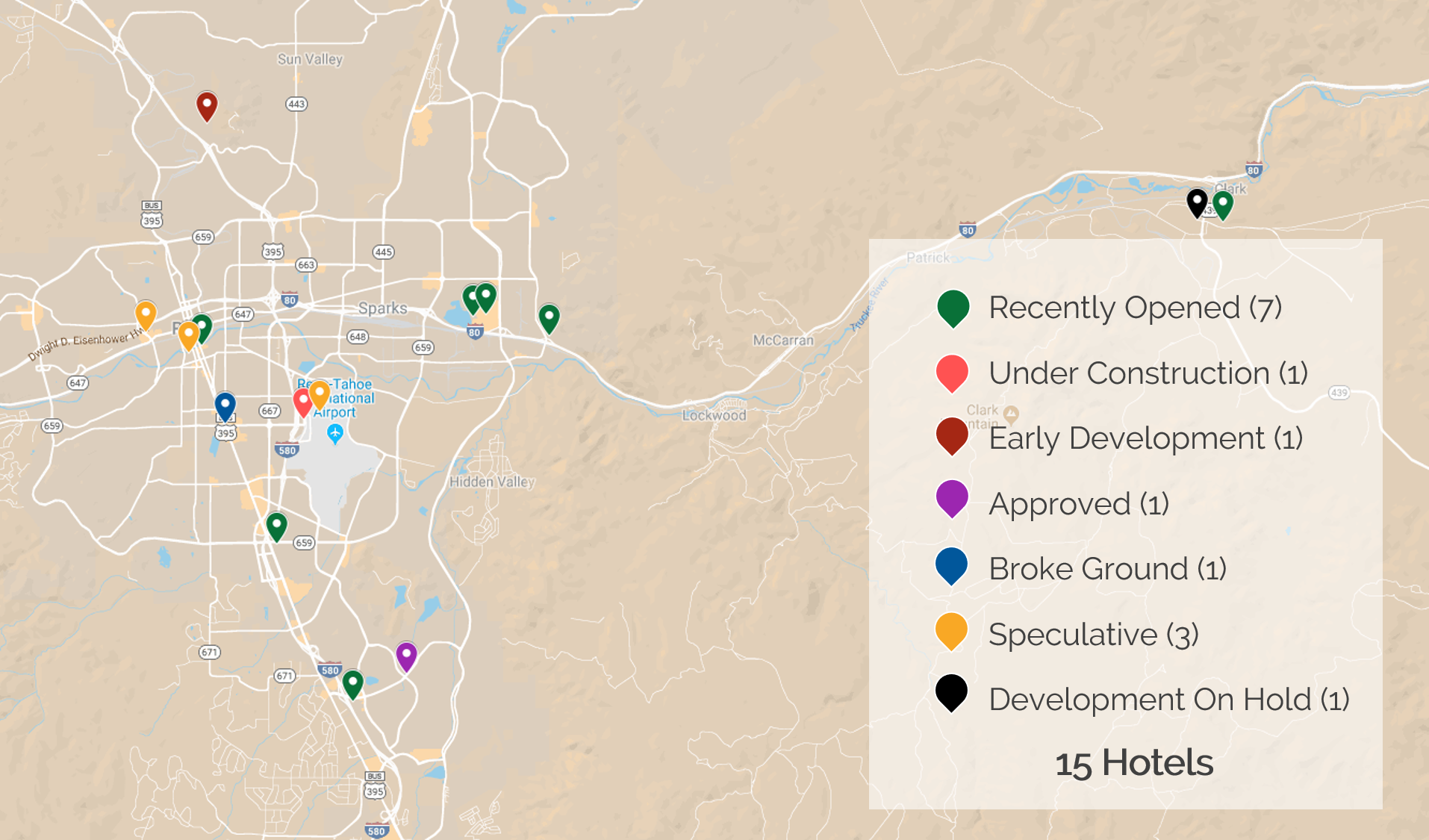 Through the end of the 2018/19 fiscal year ending June, new supply was being quickly absorbed and occupancy continued to increase. According to recent data and interviews, new supply growth has started to outpace demand growth. In addition, annual room nights from major demand generators, such as Tesla and Panasonic, are declining when compared to recent years, as Panasonic has put its expansion plans on hold and Tesla has announced that it is going to focus on maximizing its current facilities and manufacturing lines instead of continuing to build out the remaining undeveloped areas of the Gigafactory. Average rate continues to increase, albeit at a slower pace than previous levels, as hoteliers have been cautious about maintaining current market share, particularly during slower times.

The Reno-Sparks market boasts an extremely strong economy. Area companies continue to grow and expand, while EDAWN continues to recruit new companies to the market. Tourism and meeting/group demand remain additional cornerstones of the lodging market. The slowdown in hotel demand growth, coupled with the increase in new supply, indicates that it will take a few years for the new supply to be absorbed. However, the economic indictors remain strong for Reno-Sparks, and even if a downturn in the national economy starts to affect investment in the region, the area will continue to benefit from a relatively low cost of living paired with a high quality of life, a factor that is beneficial for companies that are in need of a tax-friendly state that still has land availability for development. Although occupancy in the region is expected to decline over the next couple of years as the market continues to absorb the new supply, the market is more diversified than it was a decade ago, which bodes well for the absorption of said supply. ADR growth will primarily be driven by current hoteliers’ commitment to maintain average rate versus starting to discount average rates in an effort to maintain occupancy. Given that the majority of the new supply entering the market is nationally branded and primarily upper-midscale and of a higher asset class, hoteliers are likely to maintain ADR levels instead of offering discounts so that market-wide RevPAR only declines modestly during the absorption of this new supply.

Desiree Flanary, MAI is a Senior Vice President with HVS Portland. HVS leaders now live in and work from more than 30 markets throughout the North American region, including San Diego, LA, San Francisco, Portland, Seattle, Vancouver, Las Vegas, and Phoenix in the west. Desiree earned her bachelor's degree from the University of Northern Colorado and has front-line hotel experience in both front office and housekeeping operations. Desiree travels and works extensively in the northwestern U.S. and along the West Coast, with a particular emphasis in the Central Pacific region. Contact Desiree at (970) 381-9794 or [email protected].

Is history repeating itself in the Reno market, or has the market diversified enough over the last decade to handle the influx of new supply? %%ViewCount%% Views Comments
Share:
Subscribe To Newsletter