This market snapshot provides an overview of the recent performance of the lodging industry in Chania City in Greece, in terms of demand and supply and analyzes past and future tourism trends. 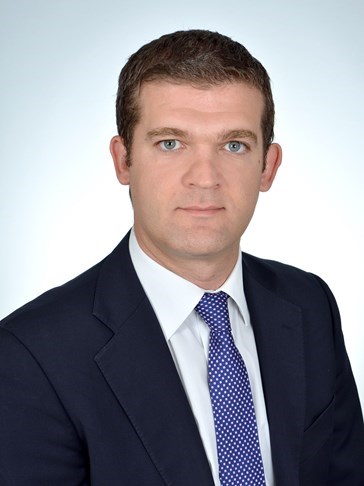 Crete is the largest and most populous of the Greek islands, the 88th largest island in the world and the fifth largest island in the Mediterranean Sea, after Sicily, Sardinia, Cyprus, and Corsica. The largest city, and the island’s capital, is Heraklio. The island is currently the most popular destination in Greece in terms of international visitation. Administratively, it is divided into four prefectures (namely Chania, Rethymno, Heraklio, and Lassithi) while major cities and tourism destinations are Heraklio, Chania, Agios Nikolaos, Rethymno, Sitia, Ierapetra, Malia, Hersonissos, Elounda, and Kissamos.

Chania Prefecture is on the west end of the island and most of its surface is covered by the “White Mountains” mountain range. The City of Chania is the capital of the Municipality and the second largest city of Crete, built over the ruins of the Minoan city of Kydonia. The city has two major gates: the airport in Akrotiri (the operation of which was recently undertaken by Fraport) and the Souda harbour, which is the biggest natural harbour in the Mediterranean Sea. The city of Chania constitutes a crossroad of civilizations and continents with a long history, natural beauty, unique architecture and rich tradition while it can be divided into two parts: the old town and the modern city which is the larger one. The old town is situated next to the old harbour and is the matrix around which the whole urban area was developed. To the south, the old town is merged with the modern part of the city, whereas to the north the physical border is the sea.

With regards to its economy, the prefecture’s main products in the primary sector (agriculture - livestock), are: olive oil, citrus, wine, vegetables, cheese, honey and bakery products. In recent years, a great interest has developed in the organic - biological cultivation and standardization of such products. The Chamber of Commerce has also done important work in the field of product certification, including the labels of Geographical Origin and Designation of Origin. In the secondary sector (industry - crafts), economic activity concentrates on the food and beverage industry, the lumber and construction industry. The tertiary sector (services) employs the majority of the population. This sector mainly deals with the hotel and tourism services as well as trade of goods. Chania does not lag behind in modern infrastructure, as it is home to the Technical University of Crete and many other educational establishments as well as a general hospital inaugurated in 2000 and serves the entire prefecture and Western Crete.

Chania International Airport, "Daskalogiannis" is an international airport located near Souda Bay on the Akrotiri Peninsula, some 14 kilometres to the northeast of the city centre. It is the fifth busiest airport in Greece accepting both scheduled and charter flights during summer from numerous major European cities.
In December 2015, the privatization of operations of the Chania International Airport and 13 other regional Greek airports was finalized with the signing of the agreement between the Fraport AG/Copelouzos Group joint venture and the state privatization fund. Immediate actions that have already been taken after Fraport Greece took over operations.
According to press releases, under this 40-year deal with Fraport the number of passenger movements is projected to increase to ten million by 2055, with a projected annual growth rate of 3.78%. The air traffic movement is predicted to grow from 15,000 to 65,700 by 2055. 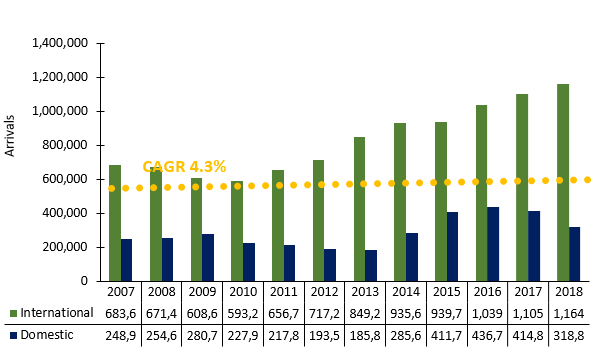 Chania also accepts thousands of tourists by sea. The port of Souda is located in the homonymous bay and is the main port of Chania. It is located about seven kilometers east from the city center, connected by frequent itineraries of public and intercity buses. The port of Souda serves also commercial purposes, while here is handled a large volume of the agricultural production of the prefecture, in olive oil and vegetables. It is considered one of the most important ports in the Eastern Mediterranean. At the north end of the port of Souda lies also the NATO Base and the facilities of the U.S. Navy, in front of which the sailing of ships is prohibited.

Tourism
Tourism is an important element of Chania’s economy. The area’s sights are concentrated mostly in the old town, which stretches around the Venetian harbour. The old city of Chania has been designated by the Ministry of Culture as a historical listed monument.  Being a big and vibrant city, and due to its ideal all-year round climate, visitation is not restricted by seasonality which is the usual case in major Greek destinations; however peak tourism levels occur during summer.

Moreover, beach conditions are outstanding - the beaches are vast and pristine and many of them award-winning Blue Flag. In the broader region are some of the most famous beaches in Crete - Elafonisi, Falassarna and Balos.

Visitation at hotels in the city  of Chania has been mainly of international nature; foreign visitation, in terms of accommodated bednights, accounted for more than 90% nearly every year while domestic tourists staying in the city are mainly Greeks travelling for corporate/business purposes to Chania.

As in most leisure tourism destinations in Greece, the highest arrival figures in Chania occur during June - August with the airport recording more than 200,000 arrivals each month and hotels reaching or sometimes exceeding 95% of occupancy. In general, the seasonality follows a typical trend for summer resort destinations where the distinct bell-shaped curve peaks in mid-July/August, the traditionally busiest summer vacation period in Greece. Various efforts have been made towards the extension of the seasonality of the destination’s visitation. The recent concession of the airport together with the stabilisation of cruise ship approaches are both factors that could play a major role in extending the operating season of the hotels and other tourism businesses in Chania. 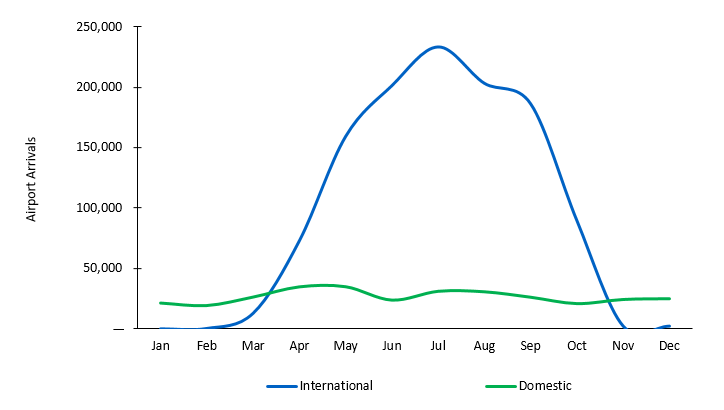 Based on recorded airport arrivals, Scandinavia is by far the dominant market for visitation with Great Britain and Poland being the only other countries with noteworthy presence. Scandinavians started visiting the area back in the 1970s and Chania has been established as a leisure destination for the last 50 years perhaps due to people’s familiarity with the region and the awareness that is developed because of word-of-mouth promotion among Scandinavian peers but also from parents to children. 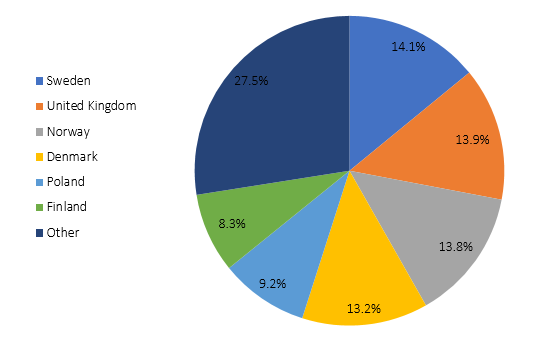 The majority of hotels in the entire prefecture are classified as one- and two-star, while the relative stagnation of five-star units was quite evident until 2013 with upscale properties increasing only by a small percentage. In 2014-18, and particularly during the last two years, this number of five-star properties experienced a tremendous increase reaching 32 hotels. The new upscale properties are mainly small luxury units with low room count operated by local hoteliers. Although the number of hotels in the municipality of Chania appears to be relatively high, 88 properties operate within the city of Chania featuring slightly more than 2,000 rooms (average size of hotels is 24 rooms).

Some of the most notable forthcoming tourism developments in the city of Chania are the following:

The wider area of Chania, outside the city's boundaries features long sandy coasts suitable for the development of large, beachfront hotels. Therefore, during the last years, the area has attracted the interest of local and international hotel investors and operators aiming at creating premium, beachfront properties targeting mainly families. The following lines describe some recent and forthcoming hotel developments in Chania’s Prefecture. 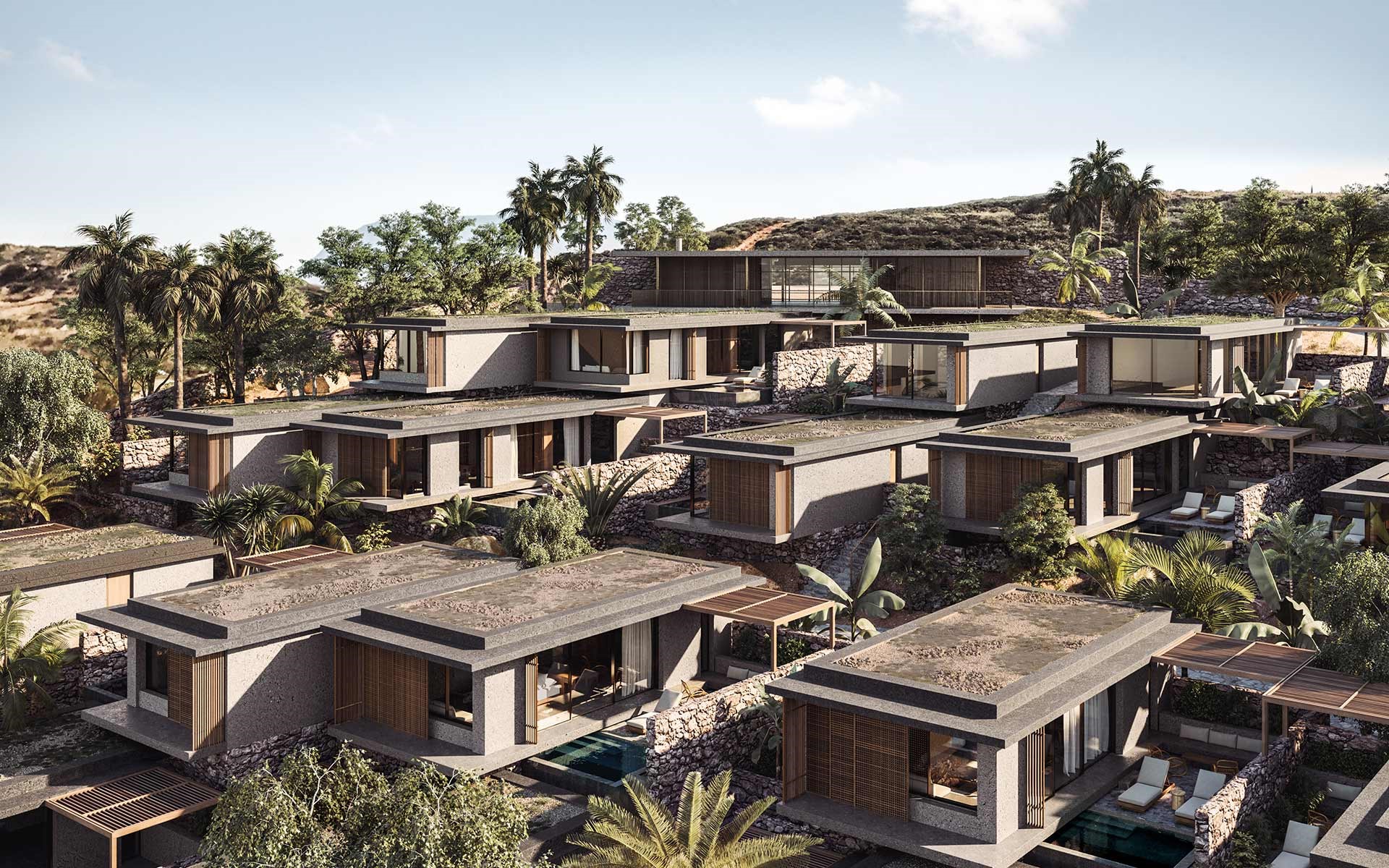 The following table provides an indication of the evolution of performance of 15 hotel properties in the municipality Chania (modern city and old district) over the last three years based on actual data. It should also be noted that all occupancy percentages refer to 365 days of operation for consistency reasons.

During  the period 2015-18, the average rate of examined hotels increased from approximately €75 to approximately €82 with the highest figures being recorded in the hotels located in the old district of Chania. The reason for this is that the hotels in the specific area are mostly visited by indivindual leisure guests while the ones in the modern city are mostly preferred by group leisure guests or corporate domestic travellers with less spending power. During the same period figures depicting occupancy rate recorded fairly high levels, for a seaside destination, ranging between 69% and 72% (when annualised). 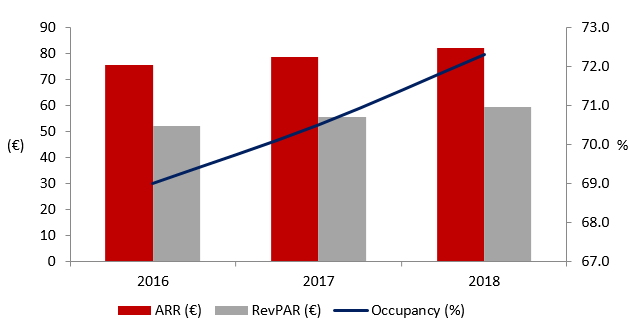 Operating season in Crete is slightly longer than other leisure destinations in the country and hotels are able to operate about 200 days due to the favorable climate conditions prevailing on the island due to its southernmost location in Greece. Especially for Chania city this season is expanded to 240 days for the seasonally operating hotels. The area is a purely leisure destination with only some limited corporate activity that consists mainly of domestic business travelers throughout the year and, secondarily, of international military executives visiting the NATO base in Souda. that also generate some room accommodation demand.

The financial instability prevailing in Greece over the last few years has opened a window of opportunity for investment as many Greek owners put their residence on the market for sale and/or rental. Chania has an emerging holiday home market. This growing trend has caught the interest of foreign investors, making the acquisition of a holiday home in Chania ideal not only for a vacation home but also as an investment which offers high rental yields and a future value appreciation. Greece is amongst the latest nations to join other European countries that have established the so-called Golden Visas designed to attract economic benefits to the country. According to that initiative, investors from non-European Union countries who buy a property worth at least €250,000 in Greece are awarded with special visas that provide residence permits to them and their family members. Moreover, the holder of a Golden Visa and his family members are awarded with a free pass to 26 Schengen-member countries in Europe. Preliminary data indicate that 2019 will be a record-breaking year for the real estate market in Greece mainly attributed to the unprecedented of Chinese investors.

According to data published the Ministry of Internal Affairs, the main source countries of people granted with residence permit for year-to-date April 2019 are: China (6,824 licenses), Russia (1,072) and Turkey (1,032). Chania comes fifth in accepting such applications on a very small scale though. However, there is a steadily increasing interest of citizens from China, Turkey, Russia to purchase real estate assets in Chania under the "Golden Vision" program.   The main reason behind Chania being ranked high in the list of preferred destinations by foreigners to buy a house in Greece is because during the last years owning a house in the city of Chania (particularly in the old part of the city) has evolved into an investment opportunity with sufficient financial returns. Another reason is the easiness of procedures as the administrative office in Chania which handles all the Golden Visa applications takes much less time to approve a request compared to the same office in Athens.

Pavlos Papadimitriou is a Director with the Athens Office of HVS, specializing in hotel valuation and financial consultancy, and a member, as well as a registered valuer, of the Royal Institution of Chartered Surveyors but also the Greek Ministry of Finance. He joined HVS Athens in late 2007 after completing the MBA programme of Les Roches School of Hotel Management in Switzerland and a BSc in Marketing and Communication from the Athens University of Economics and Business. Since then, he has conducted numerous valuations, feasibility studies, and market research analyses in the Balkans, Cyprus, Georgia, Greece, Italy, Poland, Spain, and Turkey. Please contact Pavlos at +30 (210) 361-2085 | +30 6944 862 580 or [email protected].

This market snapshot provides an overview of the recent performance of the lodging industry in Chania City in Greece, in terms of demand and supply and analyzes past and future tourism trends. %%ViewCount%% Views 1 Comments
Share:
Subscribe To Newsletter