The following article illustrates the 2018 RevPAR levels across four categories, from the top RevPAR earners to the low end; we note that the statistics for this article, inclusive of occupancy and average daily rate (ADR), were pulled from the various 10-K filings of the brands on their corporate websites.

Source: 10K filings
Ritz-Carlton led the pack in RevPAR, with W Hotels, Waldorf Astoria, and Park Hyatt not too far behind. It should be noted that Four Seasons does not disclose brand averages. Occupancy levels from the above group ranged from a low of 71.4% (Waldorf Astoria) to a high of 82.2% (Hyatt Centric), with ADR levels spanning from Hyatt Centric’s roughly $229 to Ritz-Carlton’s $373 (rounded).

The IHG brand EVEN showed notable strength in 2018, with this wellness-inspired brand ranking 15th and coming in with an average occupancy of 78% and an ADR of roughly $182. Hyatt House was the only extended-stay brand to break the top 20, with a RevPAR roughly 7% higher than the next closest extended-stay brand, Residence Inn by Marriott.
Marriott, Hilton, and Hyatt Regency brand averages were all very close to one another, with RevPAR registering in the low $130s. Occupancy levels for the Marriott and Hyatt Regency brands registered near 73%, with ADR close to the $180 mark, while Hilton approached the 77% mark in occupancy and an ADR of $173 (rounded).
2018 RevPAR, $93 to $120

Mostly extended-stay and select-service brands rounded out the top 30. Hyatt Place, Hilton Garden Inn, Courtyard by Marriott, and Cambria all ended the year within a roughly $5 RevPAR range of $100 to $105 (rounded). Of these four brands, Hyatt Place led in occupancy at 77%, while Cambria led in average rate at just under $150.

Home2 Suites and Hampton by Hilton achieved nearly identical brand average RevPAR levels in 2018, while Hampton’s competing brands of Fairfield Inn by Marriott and Holiday Inn Express came in roughly $10 and $13 lower in RevPAR, respectively. Home2 Suites by Hilton also led this group in occupancy, reported at nearly 78% for 2018.

The remaining 2018 RevPAR levels for the 61 brands reported are reflected in the following table. 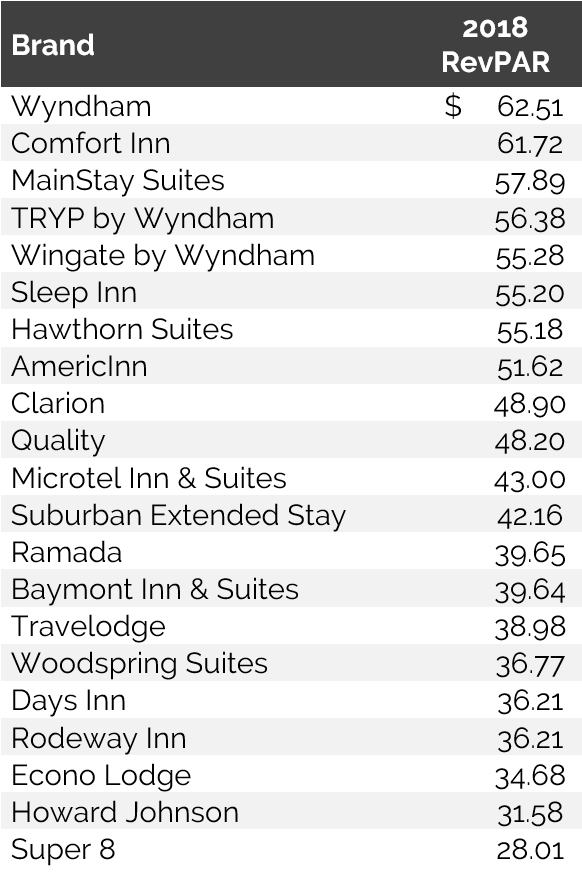