With both macro- and micro-trends supporting fixed-income hotel investments, here are five reasons why there has never been a better time to structure hotel leases in decades.

As one of the earliest forms of separating the risk associated with hotel operations and real estate ownership, lease contracts for hotels have been in existence since the mid-1900s. Despite the big four hotel brands (Marriott, Hilton, IHG and Accor) shifting to management and franchise contracts over the past 20 years, leases remain an attractive operating format in Europe for many other brands, especially in the budget segment, but also for full-service brands such as Steigenberger, Mövenpick or Dalata.

The newfound popularity of leases within this economic cycle stems from the fact that they make a lot of commercial sense, for both developers and long-term owners. From a developer’s point of view, signing a lease contract is a relatively easy process (compared to negotiating management contracts) and, owing to the reduced risk associated with the operating business, provides a stable pool of forward-funding buyers.

Lease contracts create a similarly viable exit solution for owner-operators of existing hotels that wish to free up capital, as institutional real estate investors across Europe have a great appetite for long-term, secure income that they can use to match funds’ liabilities with inflation-linked leases.

With both macro- and micro-trends supporting fixed-income hotel investments, here are five reasons why there has never been a better time to structure hotel leases in decades:

1. Operators have a tremendous appetite to sign lease contracts.

While brands have been forced to sign lease contracts to expand into the most high-profile locations of London or Paris for decades, several operators are now willing to expand outside of these ultra-prime locations to primary and secondary markets across Europe.

Budget operators, such as Premier Inn in the UK or Motel One in Germany, more commonly sign lease contracts, as they benefit from a low-risk operating model that enables them to take on long-term, index-linked fixed leases. Additionally, many budget brands are expanding concepts with smaller room sizes (for example, hub by Premier Inn, easyHotel or NoCo) which allow them to fit more beds in the same amount of space and thus maximise revenue per m2 in city centre locations.

In addition to budget brands, a number of upscale operators with a long-term view of expanding into management contracts are increasingly taking on leases as a way to initially prove their concept, with successful examples over the past decade including citizenM or 25hours hotels. As an added benefit to investors, these alternative brands allow portfolio managers to diversify their holdings and mitigate risk across hospitality assets.

Given the global macro environment of low yields and the reduced risk of inflation, hotels have become a very attractive investment opportunity for institutional buyers (as shown in Chart 1). As pension funds, insurance companies and other fixed-income investors are unable to get their required returns from sovereign bonds, they are increasingly interested in hotels as an asset class. This interest is also demonstrated by the record number of individual buyers investing in leased hotels in 2016.

As these factors continue to attract capital in the future and the hotel investment space becomes more transparent through the availability of data, institutional investors will most likely continue to invest in leased hotels and further commoditise the market. As the pool of investors grows and the cycle advances, those investors that have been considering leased hotels for the longest time might also start exploring deal types they have previously deemed too risky. Examples include investments outside of the budget sector, accepting turnover-based rent structures or shortfall caps on guaranteed rent levels which many tenants are using as a reaction to IFRS 16 accounting standards taking effect in 2019.

The investment appetite for fixed-income, leased hotel investments is also evident in the compression of capitalisation rates over recent years. Although vacant possession yields are slightly above, and management contract yields have equalled those of the peak of the previous cycle, fixed-income hotel yields have surpassed any previous records.

As the UK and Germany are the most advanced and comparatively the most transparent fixed-income hotel markets in Europe, these provide a good comparison to the previous cycle. Looking at these markets, by the third quarter of 2017 (as shown in Chart 2) prime hotel lease yields have reached circa 4.5%, which is approximately 50bps below the peak of the previous cycle. 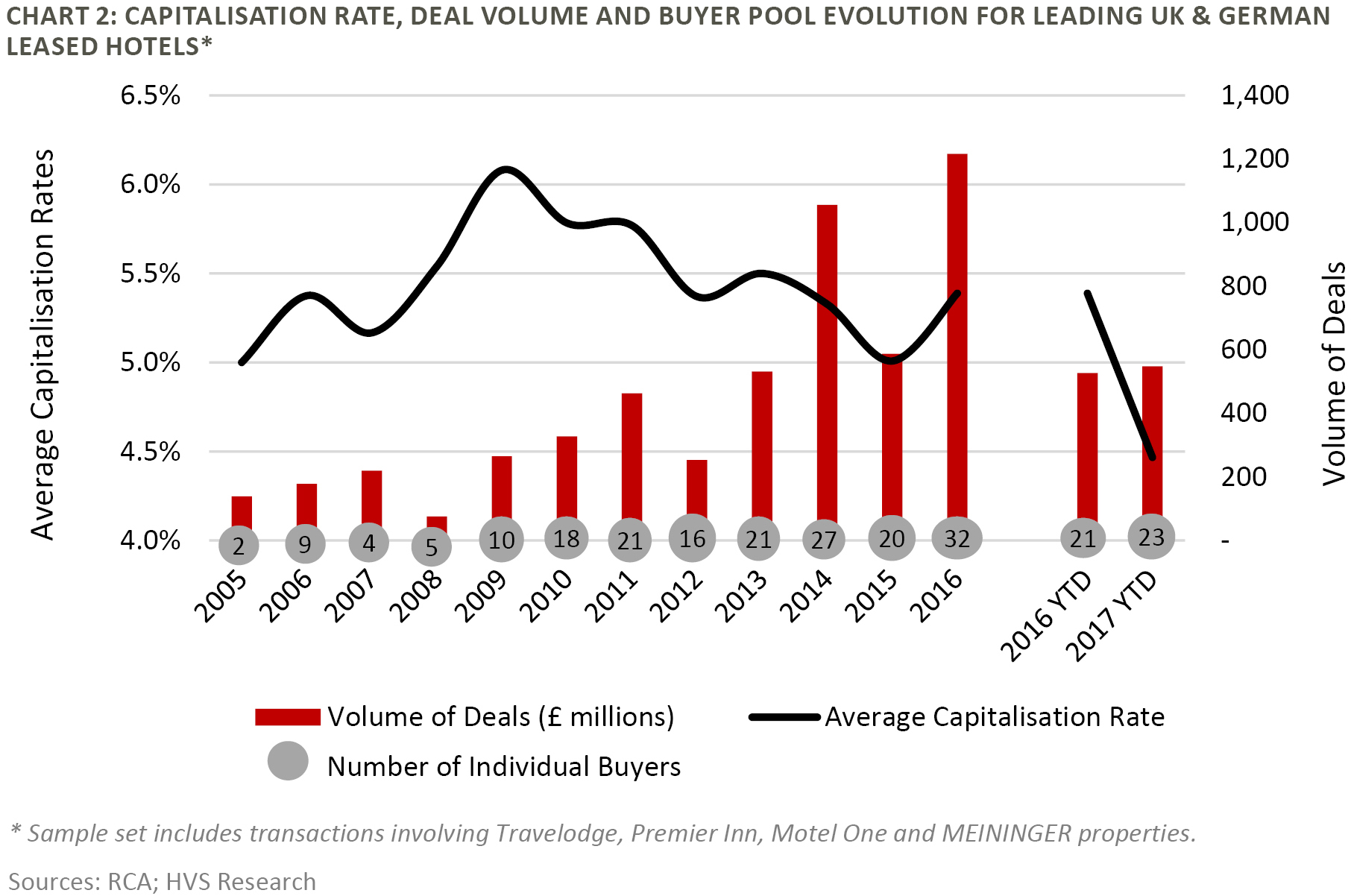 As third-party operators took a foothold in Europe over the past ten years, they brought added flexibility to the fixed-income hotel investment scene by also committing to leases, while branding their properties through franchise contracts with one of the major hotel companies.

A similar structure coined as ‘sandwich leases’, whereby the third party is committed to the lease, but outsources management through a management contract, has also become more commonplace. While considered relatively risky, the structure can create value for developers as a non-investment grade management contract or tenant can be made institutionally accepted this way, unlocking an end-investor base with a much lower cost of capital.

Another form of unlocking value for developers is through ground leases or income strips, whereby developers sell the land early in the development process as an alternative to development financing. These income strips subject the future owner of the property to an affordable ground lease payment (usually up to 20% of projected EBITDA), and are valued at lower yields as they are often very long term and heavily collateralised by the underlying hotel. While this structure does increase the yield on the building itself, the lower-yield ground portion and the decreased financing costs can help developers unlock additional value.

5. Interest rates are set to rise in the medium term.

As interest rates in the US are already on the rise, with the UK anticipated to follow having just embarked on this journey, the environment for fixed-income hotel investments cannot be realistically expected to remain as favourable as it is today.

Analysts expect gradual interest rate rises across Europe from 2019, which arguably will place upward pressure on hotel capitalisation rates as financing costs increase. The same interest rate rises will also push institutional investors back towards sovereign bond investments; however, it could be argued that as hotel fund allocations are still relatively low compared to other asset classes, institutional investor interest for hotels will not decrease substantially.

To conclude, operators’ willingness to commit to long-term indexed lease agreements and investors’ readiness to buy as well as forward-fund hotel projects has enabled the fixed-income hotel market to become far more commoditised in this cycle than ever before. While hotels being accepted as an asset class of their own has benefited the hotel industry, investors and developers should be conscious of the fact that hotels are ultimately trading assets. With this in mind, well-timed investment decisions supported by professional advice on lease term negotiations, rent coverage and a thorough understanding of the hotel’s future income producing ability should ultimately enable investors to extract the most value from each project.

With both macro- and micro-trends supporting fixed-income hotel investments, here are five reasons why there has never been a better time to structure hotel leases in decades. %%ViewCount%% Views Comments
Share:
Subscribe To Newsletter