Government and private revitalization efforts loom large in Lubbock, with more than a dozen new hotels scheduled to arrive by 2020. Major redevelopment projects promise to drive the demand for lodging, although full absorption may take several years.
Lubbock (aka “Hub City”), Texas, connects business, educational, and healthcare enterprises spread across the region known as the South Plains. This region encompasses the largest contiguous cotton-growing operations in the U.S., and agriculture, manufacturing, and technology are pillars of the local and regional economies. Economic growth in Lubbock has boomed over the past several years, and through a varied cross-section of industries, the city’s Downtown is poised for a major revitalization.

Texas Tech University continues to be one of the most prominent economic drivers in Lubbock. The university’s new Maddox Engineering Research Center opened in 2016, and the Honors Residence Hall opened this year. These facilities follow the expansion at Jones AT&T Stadium, which added more than 6,000 seats to the north end-zone prior to the 2016 season. As of late September 2017, a $48-million Sports Performance Center was still under construction south of Jones AT&T Stadium, but was already in use by the school’s athletes.
More recently, the Health Sciences Center (HSC) broke ground on the single-largest construction project undertaken at Texas Tech since its inception. The $85.9-million project will comprise three initiatives: a northern expansion with two new buildings, a western expansion of the existing Health Sciences Center facilities, and a new boulevard entrance to the entire HSC campus.
The University, which comprises eleven colleges, currently has a student population of roughly 37,000, but expects to push that to 40,000 students by the 2020 enrollment year.
Enrollment Levels Projected to Double Between 1968 and 2020

The City of Lubbock is a primary shopping destination for West Texas and Eastern New Mexico, and also serves the needs of the growing Texas Tech student body during the school year. Citywide retail growth continues, especially in the West End District of Lubbock. The West End Shopping Center, which opened its first stores in November 2015, has recently welcomed new ones; as of October 2017, a Costco Wholesale, Cabela's, Marshalls HomeGoods, Nike Factory Store, and Gap had all opened retail locations. Dining options at the West End expanded with the opening of P.F. Chang's in June 2017; other restaurants onsite include Lubbock's first In-N-Out and Panera Bread.

Downtown Lubbock, which encompasses the Central Business District, the Depot District, and the Arts District, serves as greater Lubbock’s main economic and government hub.
The Downtown Redevelopment Commission issued its Downtown Revitalization Plan in 2005, proposing a three-phase redevelopment of Downtown Lubbock. Phase I includes construction of the Buddy Holly Hall of Performing Arts & Sciences, which commenced this past April. Phase II incorporates the renovation of the Lubbock Civic Center; a $10-million renovation of the interior of the Civic Center was completed in early 2017. The final phase involves the development of a full-service, nationally branded hotel on the site of the Lubbock Memorial Civic Center.
The public backing (and funding) of much of the Downtown Revitalization Plan has also spurred interest from private developers. In early 2017, the old Lubbock County Jail was acquired by a private developer who plans to turn the building into a combination of office space and residential units, according to local officials. This follows the redevelopment of the old Pioneer Hotel. The building, which was constructed in 1925 and purchased in 2005 by the McDougal Companies, reopened with luxury living, office, and retail components in 2012.

The revitalization of Downtown Lubbock comes on the heels of the completion of a similar process in the Overton District, which lies just to its west. At the time, the Overton redevelopment was the largest privately funded, master-planned redevelopment undertaking in the nation, led by the local McDougal Companies. What had previously been an undesirable area is now popular with students, residents, and visitors alike, thanks to an abundance of dining, retail, and lodging options. The successful revitalization of the Overton District sets the precedent for the forthcoming redevelopment projects in Downtown Lubbock.

The Lubbock Memorial Civic Center, which was built to commemorate victims of a 1970 tornado at that site, primarily hosts local events and attracts only limited demand from outside the greater Lubbock area. To meet the needs of larger conventions, city officials have been researching the potential for a full-service hotel adjacent to the facility. This hotel, which represents the final phase of the Downtown Revitalization Plan, is still in the early stages of development and is being reviewed by the City. The hotel’s development would be a public-private partnership, with revenues reinvested into the further revitalization of Downtown. Moreover, several officials have expressed interest in expanding the Lubbock Memorial Civic Center into a modern convention center, with the goal to attract larger events and groups to Lubbock year-round; however, no concrete plans have yet to materialize.

The new Buddy Holly Hall of Performing Arts & Sciences is currently under construction to the northwest of the Lubbock Memorial Civic Center; the state-of-the-art performing arts center will include a 450-seat community theatre, a 2,200-seat main performance hall, a 6,000-square-foot multipurpose room, a ballet academy, and a full-service bistro upon completion, which is scheduled for late 2019 or early 2020. The new hall will be the preeminent entertainment venue in West Texas, expected to host top touring musicians and entertainers.

Supply growth in Lubbock across all service levels started in late 2013 and peaked in 2016. Local hotel developers have led the trend of growing supply. However, even in its initial stages, the revitalization of Downtown began to attract interest from regional developers and operators.
Breakdown of New Supply Assuming 250-Room Civic Center Hotel

The recent renovation of the Lubbock Memorial Civic Center and the start of construction for the Buddy Holly Hall for Performing Arts & Sciences have generated new interest in hotel development Downtown. This follows the opening of several hotels in Downtown Lubbock in recent years, including the Courtyard by Marriott in 2014.
Eight Proposed Hotel Projects Scheduled for Completion by Mid-Year 2020 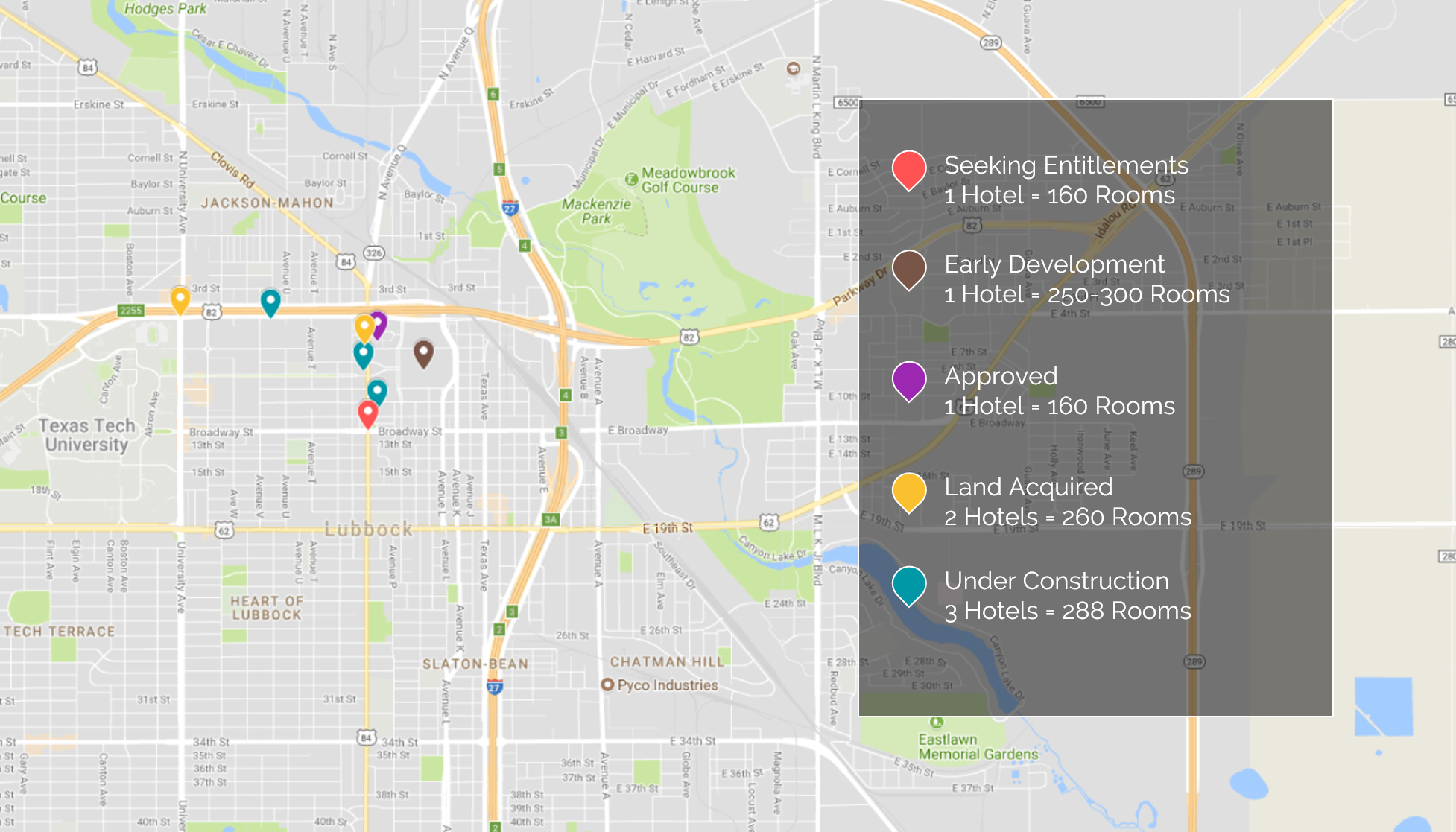 The area surrounding Texas Tech University continues to be attractive to area developers. The Hyatt Place in the Overton District, which opened in February 2016, is the most recent hotel to be developed around the university, with three others to open in the next few years.
South of Downtown Lubbock, several properties are in the pipeline along either Loop 289 or Interstate 27/U.S. Highway 87. The growth of the West End Shopping Center has made the southwest area of the city a more prominent retail destination, as well.
Three Hotels Recently Opened Outside of Downtown,
Another Eleven Set to Open by Mid-Year 2020

A Time of Transition

When the Overton Hotel & Conference Center opened, it marked the first new-build, full-service hotel in Lubbock since 1983, as both the Embassy Suites and the MCM Elegante were conversions of existing properties. The success of the Overton has piqued the interest of local and regional developers alike.
As shown in the preceding tables, three new-build, full-service properties are in the pipeline. Furthermore, a full-service property, which had previously operated as a Radisson before being left vacant, is in the process of being converted to a DoubleTree by Hilton. This influx of new-build, nationally branded, full-service hotel properties should increase the overall, market-wide average daily rate (ADR) in Lubbock.
Four of Five Proposed Full-Service Hotels to be Located Downtown

The sheer percentage increase in new hotel supply raises the question of how many more rooms the Lubbock lodging market is prepared to absorb. Here, it’s important to note that nearly all product tiers and types are represented in the pipeline of new hotel supply. In addition, each major brand has several products in the pipeline represented throughout the city, so the benefit of any individual brand affiliation, both existing and proposed, could be diluted over the next few years. Finally, the incoming supply follows several years of similar increases. These conditions point to an extended period of absorption, even given the expected increases in demand generation from revitalization and other projects throughout the city.
Lubbock Supply Additions 2013–2016

Source: HVS
The demand generated by ongoing commercial and healthcare growth throughout Lubbock should help offset the influx of hotel supply. Furthermore, revitalization efforts in the downtown core, specifically the completion of the Buddy Holly Hall of Performing Arts & Sciences and recent improvements to the Lubbock Memorial Civic Center, will produce demand that had not previously existed in the market.

There’s no doubt that Lubbock’s hotel market is entering a new era. Commercial and governmental efforts have spurred growth across multiple economic sectors, and this growth, in turn, has led to a boom in the development of new hotels. The absorption of the new supply should prove manageable—and ultimately beneficial to metrics such as average rate—in the market. Hence, Lubbock’s hotel market looks to not only stand on solid ground, but be poised for significant expansion over the next several years.