This market snapshot provides an overview of the Q32017 performance of the lodging industry in Hong Kong, in terms of demand and supply, and the retail sector performance.

The third quarter of 2017 recorded the highest number of mainland Chinese arrivals since the same period in 2015, which bodes well for Hong Kong tourism. Safety concerns towards other destinations in the region and fewer headline-making news about Hong Kong are the key contributors to the increase in visitor arrivals from mainland China. Thus, the tourism and the retail sectors in Hong Kong enjoyed a steady recovery after a slump in mainland arrivals in 2016.

The robust 2.2% growth to 42.6 million visitor arrivals in Hong Kong during the first nine months of 2017 is a strong indicator of a recovery in the city’s tourism sector. According to Hong Kong Tourism Board (HKTB), in the third quarter of the year, Hong Kong registered an increase of 268,000 arrivals, a 1.8% rise over the same period in 2016. Specifically, September contributed the largest growth rate to this quarter at a 4.8% year-on-year, followed by July at 2.4%, while August registered a 1.2% decline due to the Category-10 and Category-8 typhoons sweeping across the city at the end of August. The top five feeder markets (by order of size) are mainland China, Taiwan, Korea, Japan, and the United States. Mainland China and Japan registered a positive YoY change, while the other three demonstrated a decline in visitor arrivals in the third quarter, partly due to a higher competition from other Asian countries.

Accounting for 78.3% of arrivals in the third quarter of 2017, mainland Chinese visitors registered 2.7% year-on-year growth to 11.6 million. This is good news for Hong Kong as the city had lost out on attracting experienced Chinese travellers to more ‘flashy’ destinations, in Asia and Europe. Given that safety concern is a predominant criteria while making  travel decisions, headlines of terrorist attacks in Europe and North America, the de facto ban on package tours to Korea, and the strained relations with Taiwan, helped to drive mainland Chinese travellers back to Hong Kong. Furthermore, Hong Kong’s relatively calm political climate and reduced negative news in offical mainland media are recuperating its reputation for mainland Chinese travellers. The 20th handover anniversary celebration with President Xi Jingping’s visit to the city in July also helped to boost the modest growth of visitor arrivals in the third quarter of 2017, of which its newly appointed Chief Executive also benefits indirectly.

Among other non-mainland Chinese feeder markets, Japan recorded the highest year-on-year growth of visitor arrivals at 14.4% to 325,000 visitors in the third quarter of the year. Aided by HKTB’s effective campaign at this year’s Tourism Expo Japan, Hong Kong had become a more popular destination among Japanese. The improved tourism partnership between China and Japan also rejuvenated the growth of Japanese visitors, to some extent. But the main factor to the increase was due to the rising flight capacity between Japan and Hong Kong. New flights added by both the legacy carriers and low-cost carriers, such as Hong Kong Express, Jet Star and Vanilla Air from Tokyo and Peach from Osaka, further improving lower-cost travelling options.

Taiwan and South Korea both experienced a slight decline by 2.3% and 0.9% to 516,000 and 334,000 arrivals, respectively. Surpassing Macau, the United States become the fifth largest visitor arrivals source market with 1.8% of market share, sending 267,000 Americans visitors to Hong Kong despite a minor 0.5% year-on-year decrease. 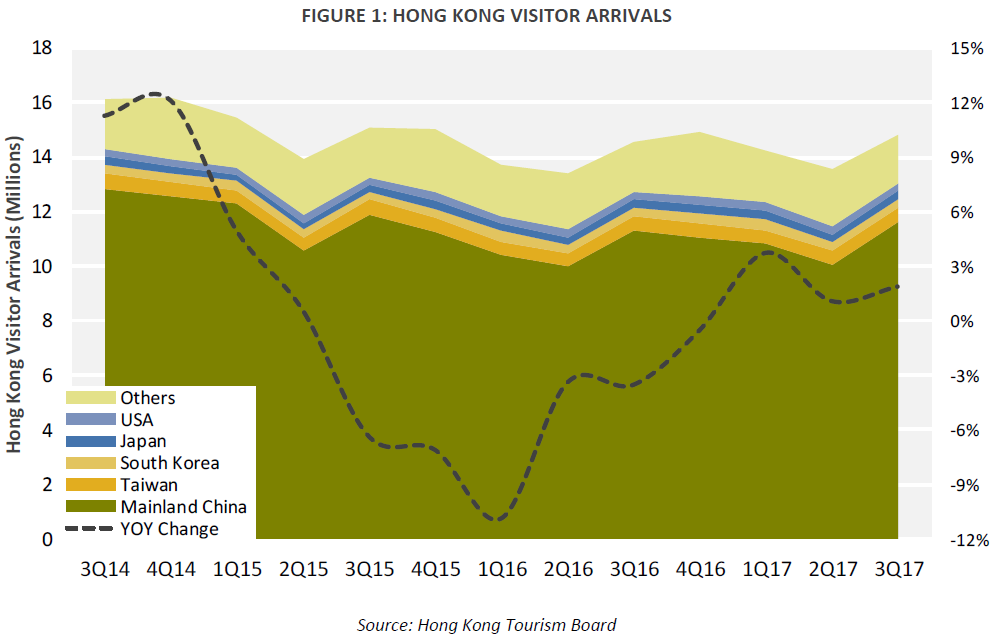 Relative to the moderate 1.8% increase in visitor arrivals in the third quarter of 2017, Hong Kong attracted overnight visitors at a high margin of 3.1% compared to the same period in 2016. During the third quarter, over 7 million of visitors stayed overnight, an additional 218,000 visitors from 2016.

On the contrary, Taiwan registered a stronger plummet in overnight visitors at 7.1%, year-on-year, in contrast to a slight 1.2% decline from the same period in 2016. One of the reasons for only 42.2% of Taiwanese visitors staying  overnight, compared to 44.4% in 2016, could be explained by the increasing number of Taiwanese visitors transiting in Hong Kong, as the flights options from Taiwan to China are limited. To a lesser extent, South Korea, as the second largest overnight visitors source market, posted a 1.5% year-on-year decrease to 257,000. The United States exhibited a similar trend with a decrease of 1.5% overnight visitors, leading to only 188,000 Americans staying overnight in Hong Kong.

Compared to other regions, Southeast Asia overnight visitors declined by a sizeable amount during the third quarter of 2017. As a result of the slow economy and weaker currency in Southeast Asia, travellers from the region preferred to travel to destinations nearer to home. As 2017 marks the 50th anniversary of the Association of Southeast Asian Nations (ASEAN), the association initiated substantial marketing promotions to boost tourism in affiliated countries, such as offering affordable tour packages. In addition, Taiwan and Japan began to loosen visa requirements towards Southeast Asian countries, further dampening Southeast Asian visitors desire to visit Hong Kong as they have a wider range of travelling options now. Explicitly, Indonesia recorded a decrease from the same quarter in 2016 by 13.8% to 84,000 travellers, Malaysia by 15.0% to 68,000, Thailand by 12.2% to 79,000, and India by 14.6% to 63,000. 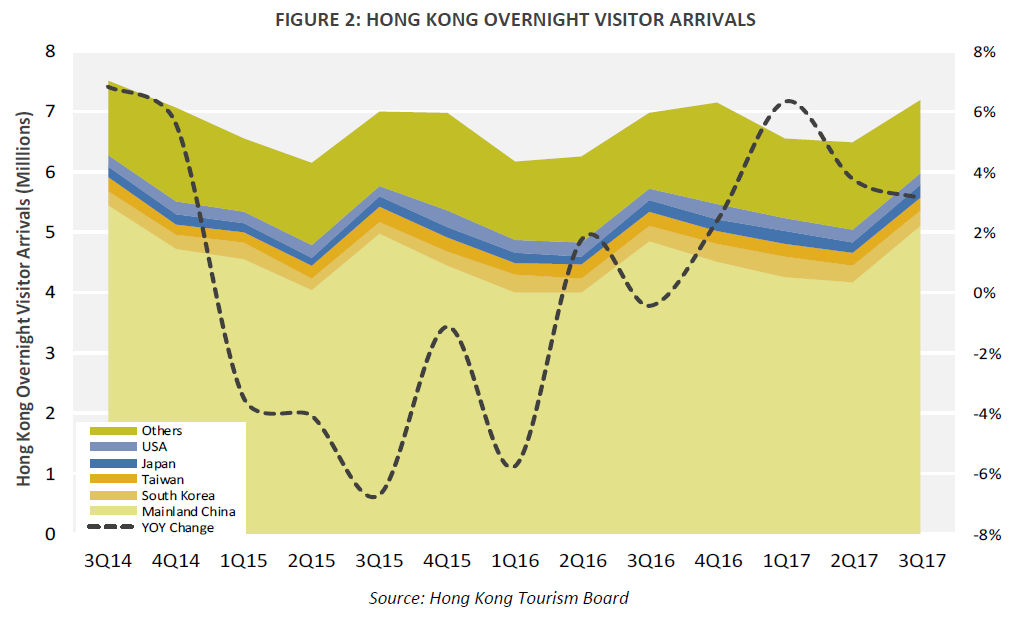 After a slump in mainland visitor arrivals in 2016, the hotel market players in Hong Kong remained cautious about trading off average rate gains versus maintaining or increasing  occupancy. The strong return growth of overnight visitors in the year-to-date through September 2017 period stimulated the recovery of the hotel market.

In the third quarter of 2017, hotel occupancy reached a one percentage point increase to 89.4% from the same period in 2016. Despite the sluggish improvement of average rate at only 0.6% to HK$1,192, revenue per available room (RevPAR) for the overall market still registered a 1.8% year-on-year growth to HK$1,065.

Similarly, year-to-date through September 2017 period Hong Kong hotel market’s RevPAR is up by 1.8% to HK$1,072. This increase was to be achieved by a decrease in average rate by 1.1% to HK$1,217 in exchange for a 2.5 percentage point increase in occupancy to 88.0%. In particular, Medium Tariff hotels and High-Tariff B hotels received remarkable growth. Meanwhile, High-Tariff A hotels experienced a rebalance of demand to more value-oriented segments which triggered a declining average rate, in order to drive up occupancy.

With the rising pickup in demand and the lower cost of operations, Medium Tariff hotels witnessed a swifter recovery than other hotel categories. Its noticeable improvement on RevPAR at 12.7% year-on-year to HK$601 was accelerated by a 5.1 percentage point surge in occupancy to 89.8% and a 6.3% growth in average rate to HK$668. Likewise, High-Tariff B hotels posted a 2.9% increase in RevPAR with a 1.1 percentage point increase in occupancy to 88.9% and 1.7% increase in average rate to HK$996.

For the outlook, in our opinion, the high level of competition and modest business travel spending, specifically among High-Tariff A hotels will provide limited upside potential for average rate, while compression from strengthening of demand could mitigate these trends. For 2018, we foresee a continuous recovery in occupancy in the hotel market, given the growth in overnight visitor arrivals and capacity at hotels in periphery locations. 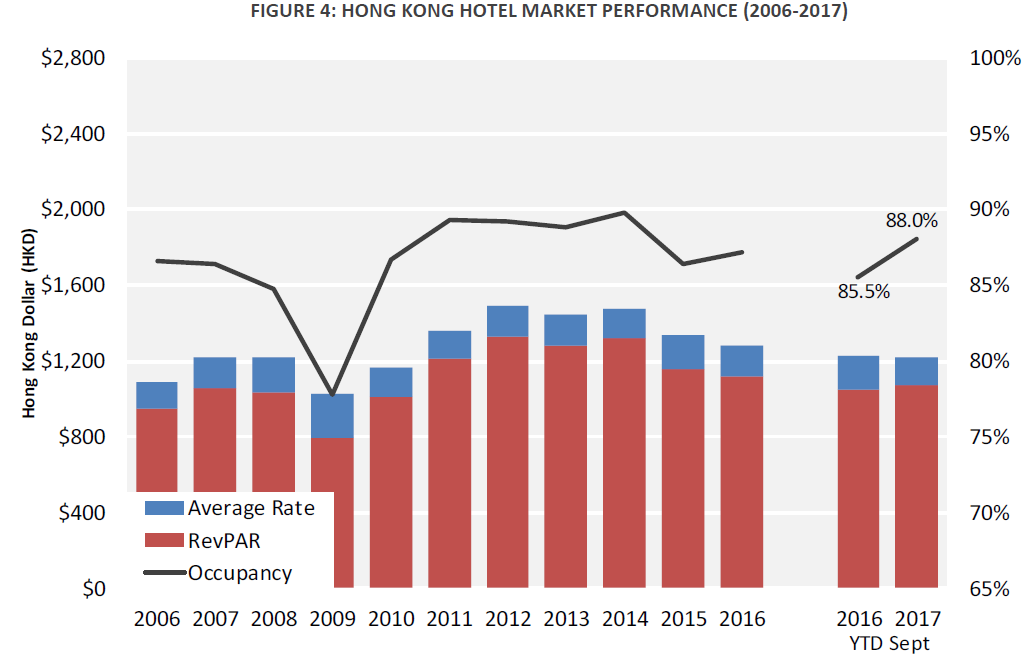 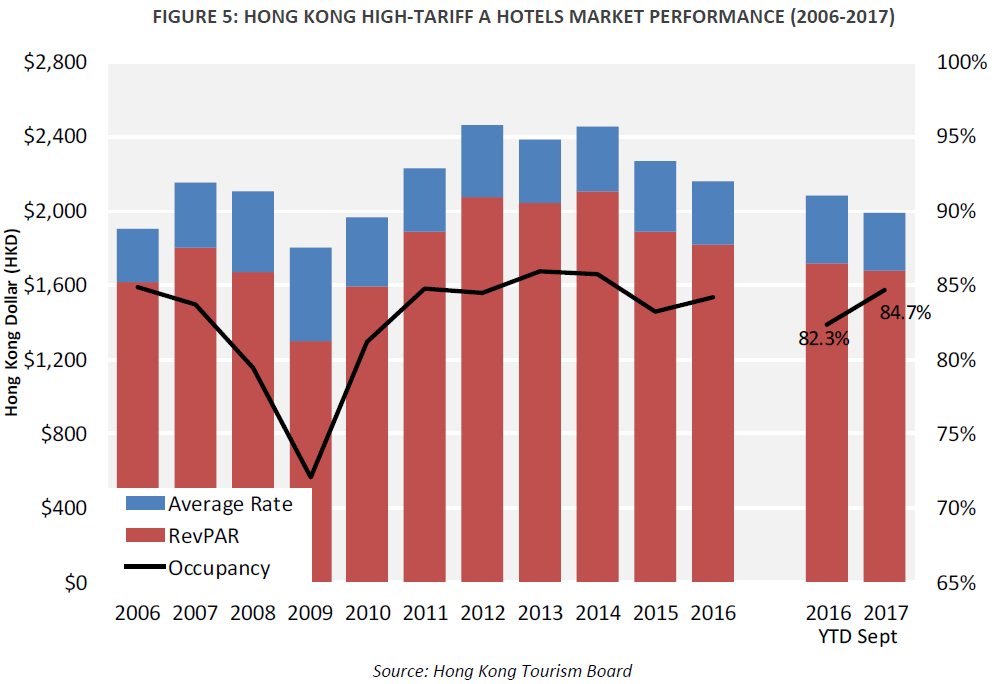 From 2006 to 2016, the supply of hotel rooms increased at a 10-year compound annual growth rate (CAGR) of 5.1%. Among the five categories, guesthouse registered the strongest CAGR of 8.5%, followed by High-Tariff A hotels with a CAGR of 5.3%.

Amid the gradual recovery in the tourism sector, Hong Kong’s hotel market supply continued to grow. As of September 2017, there were 273 hotels and 1,463 guesthouses in Hong Kong, housing a total of 90,291 rooms. This figure reflects solid growth in hotel supply of 4.2% compared to September 2016. In particular, High-Tariff A and High-Tariff B hotel rooms expanded at a year-on-year growth rate of 3.1% and 7.9% to approximately 18,600 and 30,000, respectively; they accounted for 20.6% and 33.2% of total hotel room inventory. Notable additions to supply during this period include Pentahotel in Tuen Mun with 298 guestrooms, iClub Hotel in To Kwa Wan with 340 guestrooms, Bridal Tea House in Hung Hom with 382 guestrooms, Kerry Hotel in Hung Hom with 546 guestrooms, and Disney Explorers Lodge in Lantau with 750 guestrooms.

In recent years, some noticeable trends occurring in the hotel supply market include converting industrial lands into hotels and redeveloping hotels into office buildings. With the expanding presence of Chinese companies in the city, commercial property values have appreciated rapidly prompting real estate owners to consider alternative uses for hotels. As new supply slows, conversion of existing hotels to offices, vertical retail or co-living concepts could potentially have a positive impact on the city’s hotel market performance. 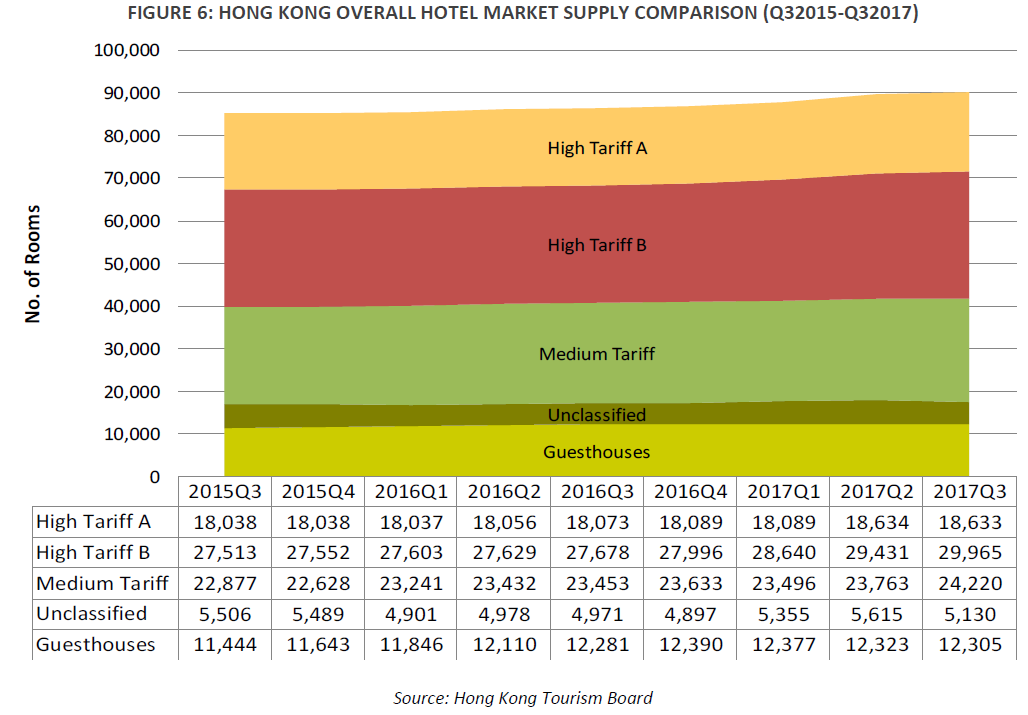 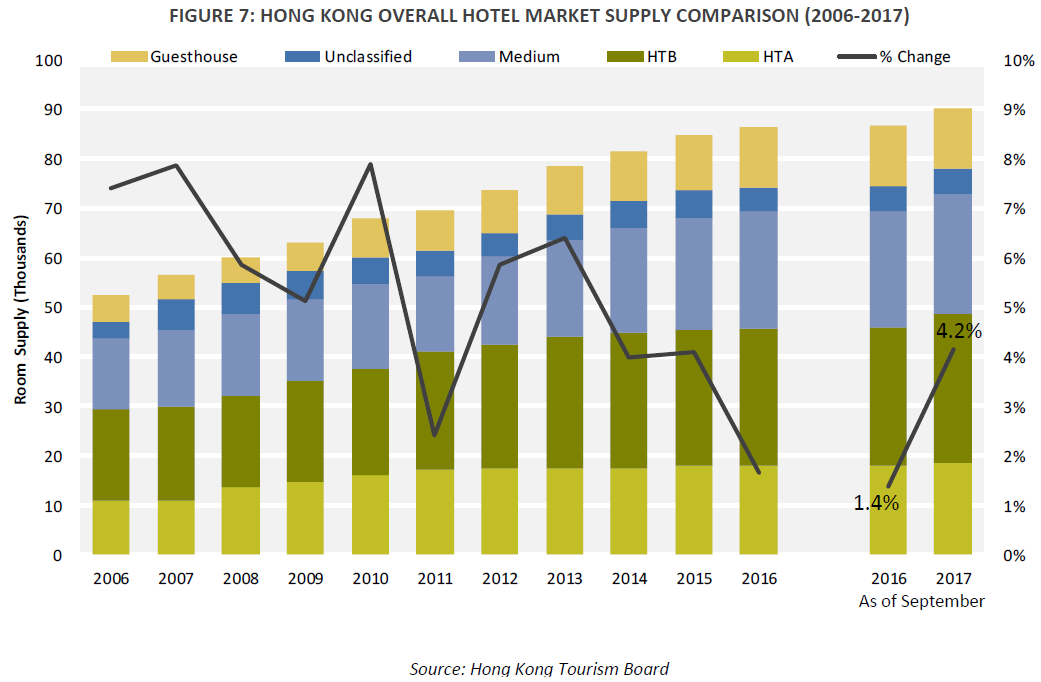 2015 and 2016 were challenging years for both the tourism and retail sectors in Hong Kong. While Hong Kong retail sales registered a remarkable compound annual growth rate of 54.3% from 2006 to 2016, this jump was mainly credited to the surge in mainland Chinese visitor arrivals. However, following the implementation of quantity restrictions on infant formula purchases, anti-corruption drive, political tensions and negative publicity about Hong Kong on the mainland, visitor arrivals slowed and turned the city’s retail sales negative, both in 2015 by 3.7% and 2016 by 8.1% (mainland Chinese visitor arrivals fell by 2.6% and 7.0% in 2015 and 2016). Specifically, the jewellery, watches and clocks, and valuable gifts (JWCG) category suffered a downturn of 26.6% in 2016.

Retail sales during the year-to-date through September 2017 period were lacklustre at a 0.9% growth. However, compared to the same period in 2016, which registered a 9.6% decline, the downward trend seems to have come to an end. Robust local consumption and improved inbound performance helped support retail sales performance in 2017.

As big-spending mainland Chinese shoppers flew elsewhere to buy luxury goods, more Hong Kong retail landlords attempted to cope with the falling number of mainland visitors by adjusting their tenant mix to increase the proportion of food and beverage or mass market brands. Additionally, international brands’ alignment strategy such as Chanel and Burberry lowered their prices in Hong Kong in order to encourage local consumption as well. Specifically in July, the celebrations for the 20th anniversary of Hong Kong’s return to Chinese rule created a positive impact on attracting more tourists to the city, as the total visitor arrivals in that month increased by 2.4% and mainland Chinese visitor arrivals by 3.7%. Luxury goods sales in July 2017 noticed a strong recovery from the previous year, as JWCG registered an increase of 13.3%, the biggest growth since almost four years ago in August 2013 at 19.9%. Looking ahead, the retail performance in Hong Kong is set to maintain moderate growth. 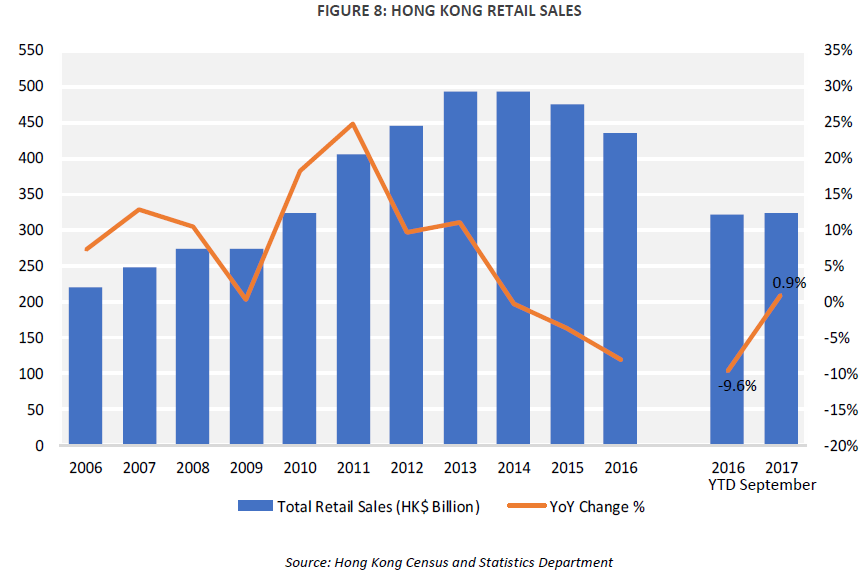 This market snapshot provides an overview of the Q32017 performance of the lodging industry in Hong Kong, in terms of demand and supply, and the retail sector performance. %%ViewCount%% Views Comments
Share:
Subscribe To Newsletter