The gateway city’s hotel market is amid a steady expansion and continues to present attractive investment opportunities.

St. Louis is poised to enter a post-recovery phase of economic development and expansion that should continue to support the recent growth of the region’s hotel market. Numerous proposed developments and business expansions are anticipated to pave the way for continued transient and extended-stay lodging demand growth. Meanwhile, the convention center is operating at new peak capacity. While the growth of hotel supply has begun to accelerate, it remains modest in comparison to most major markets across the country, and is expected to stay in check through the near term. As such, St. Louis is ripe with hotel investment opportunities, provided that buyers and developers exercise appropriate due diligence and market research to identify assets and locations that will provide fruitful returns.

A flurry of new construction projects was announced throughout the region in 2016, adding to many major projects already underway. These developments, and their location within the region, are highlighted in the following map. We have focused on office, industrial, and institutional projects, as well as sports and entertainment complexes, that are expected to have a direct impact on lodging demand. 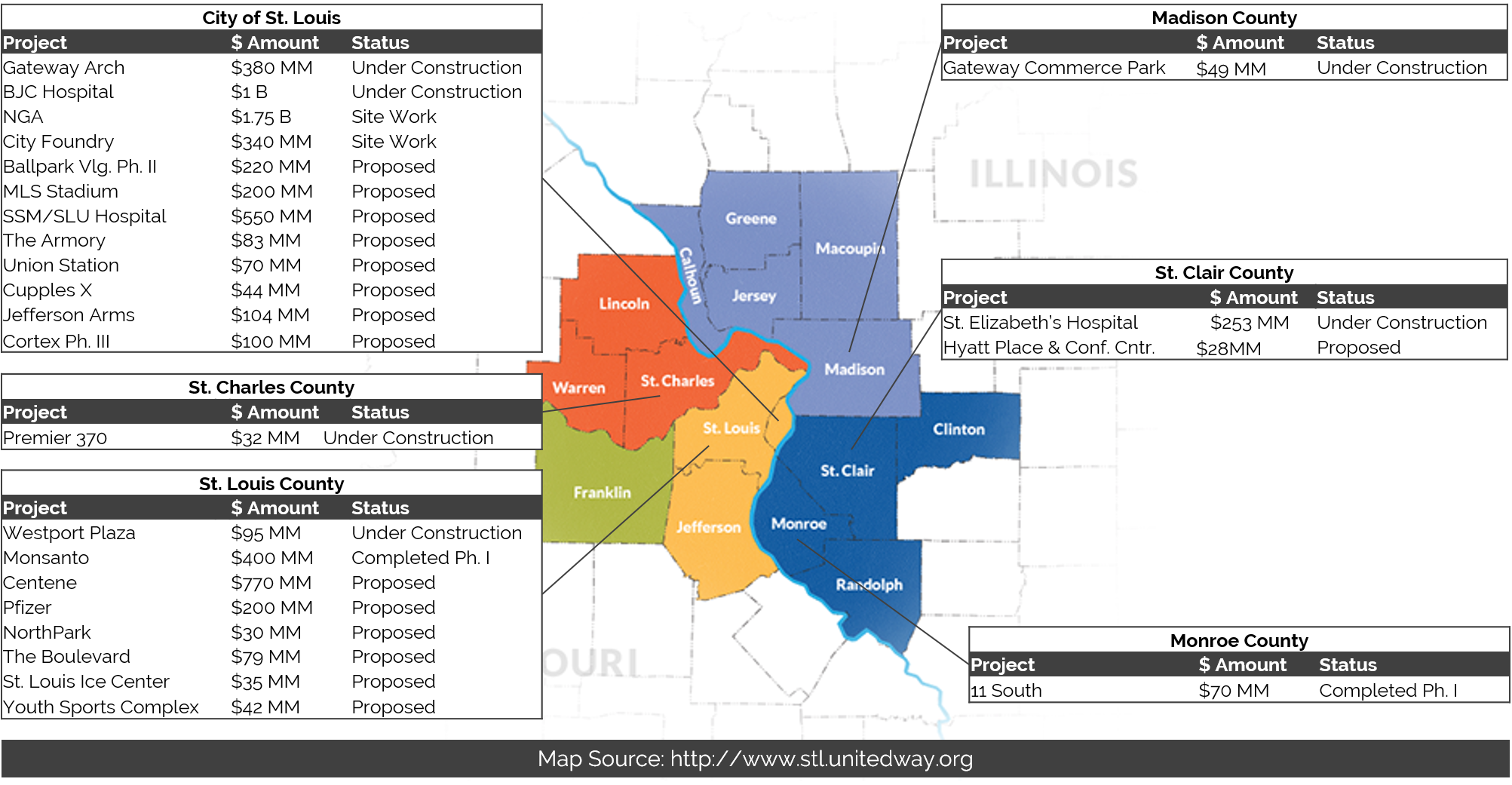 Despite the relocation of the St. Louis Rams following the 2015/16 NFL season, leisure demand has remained strong in the region and should continue to expand with significant investments in new leisure demand generators. The most prominent of these is the $380-million renovation of the Gateway Arch and the surrounding grounds. Through the removal of a parking garage and the construction of a pedestrian park over Interstate 44, the Arch grounds will be better integrated with the surrounding CBD when the project is completed in 2017.

A group of investors has pledged $240 million toward efforts to attract a new Major League Soccer (MLS) team to St. Louis. The plan includes the construction of a new $200-million stadium in the Downtown West neighborhood, which is contingent upon a public-private financing structure that has not yet been approved. Additionally, the owners of Union Station, situated directly east of the proposed stadium site, have proposed a $70-million redevelopment to revive the attraction. The owners have already renovated the existing hotel and installed new fire, light, and laser shows; plans include a 200-foot Ferris wheel and 75,000-square-foot aquarium.

Commercial demand in the City of St. Louis should be most directly affected by the construction of the new $1.75-billion western headquarters of the National Geospatial Intelligence Agency, as well as the continued growth of the Cortex Innovation Community, a regional hub of bioscience and technology research. In St. Louis County, hotel demand should be positively influenced by the expansion and renovation of Westport Plaza, which is centered on the construction of World Wide Technology’s new headquarters building. Monsanto continues to execute on a $400-million expansion of its Chesterfield Village Research Center, and Pfizer has announced plans for a new $200-million campus nearby. Furthermore, Centene Corporation is moving forward with a $770-million expansion of its Clayton headquarters campus, including 1.7 million square feet of new office space and an auditorium.

St. Louis enjoys a reputation as a relatively low-cost meeting destination, and convention activity helps provide a base of demand for downtown hotels, the region’s largest concentration of hotel rooms. The America's Center Convention Complex, which includes the St. Louis Executive Conference Center and The Dome at America’s Center, is the area's primary meeting venue, offering more than 500,000 square feet of prime exhibit space. The Dome at the America’s Center, which was formerly home to the St. Louis Rams, seats over 64,000; the facility is capable of hosting both conventions and large sporting events. Convention center statistics from 2008 through 2015 are illustrated below. According to officials with the St. Louis Convention & Visitor’s Commission, 2016 attendance at The America’s Center Convention Complex was slightly below the 2015 peak; however, the outlook for 2017 is stronger.

Source: America's Center Convention Complex
Each year, the Convention & Visitors’ Commission makes a seven-year projection of definite future bookings. These projections, which are for meeting, convention, and sporting event bookings throughout the region, allow us to compare the current meeting and group pipeline to prior years. As shown in the following chart, the pipeline as of 2016 is the largest it has been in the past ten years.

Lodging demand in the region has steadily expanded in recent years and will be spurred further by the construction and expansion of various lodging demand generators, as well as a strong base of convention activity. In recent years, the growth in the supply of hotel rooms has remained modest; however, as overall development activity ramps up, hotel development is expected to follow suit. The following map shows the locations of proposed hotels in the region; these include hotel projects that are under construction, seeking financing, in early development, or simply under consideration. We are currently tracking approximately 35 such projects that represent more than 4,000 rooms. We note that some of the more speculative and complex projects may take several years to come to fruition, if at all. 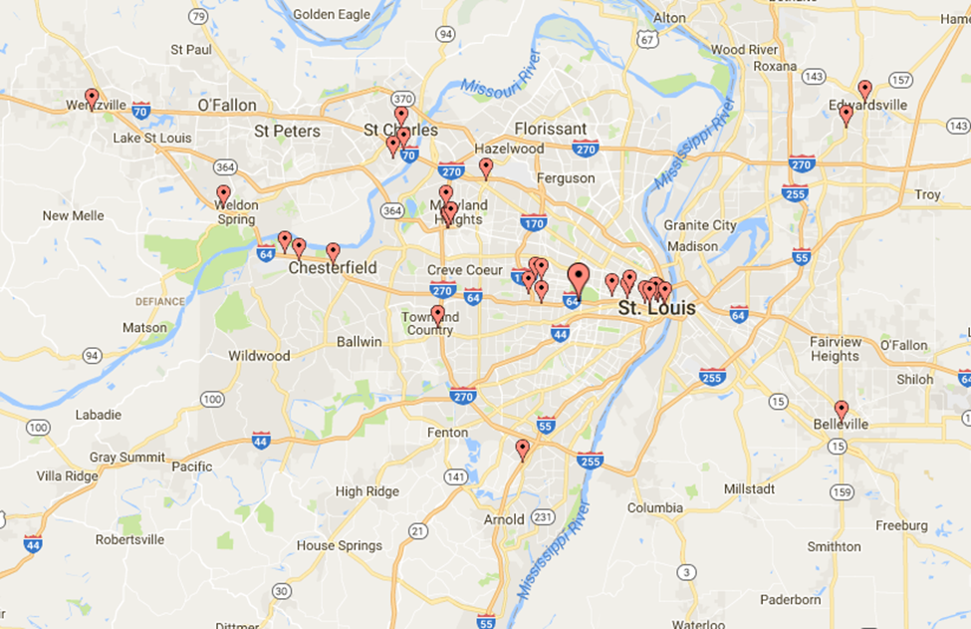 Many of the proposed hotel projects appear to be appropriately located in areas primed for further demand growth. Much of the new supply is concentrated along the Interstate 64 corridor in St. Louis and Clayton; this aligns with some of the region’s most impactful demand-side expansions, such as the Gateway Arch renovation and the proposed expansions of Centene Corporation’s headquarters. Elsewhere in the region, there is a cluster of new supply forming around Westport Plaza and along the Interstate 64 corridor in Chesterfield. There are smaller clusters in the growing suburban submarkets of St. Charles and Edwardsville, Illinois. Overall, the outlook for supply growth appears measured and in relative equilibrium with the anticipated expansion of demand.

Conclusion: The Intersection of Supply and Demand

Based on a review of the HVS database, occupancy in the region surpassed the pre-recession peak a few years ago, and has continued to grow. Occupancy increases have been less robust in recent years, giving way to more pronounced increases in average daily rate (ADR). The recent ADR growth has helped push revenue per available room (RevPAR) to unprecedented levels. As a robust rebound and recovery from the recession has given way to net new growth over historical levels, the pace of RevPAR growth has understandably slowed. While supply levels have begun to grow again, this growth has not, and is not expected to, come at the expense of continued RevPAR appreciation. Based on these trends, the St. Louis hotel market appears to be in the expansion stage of the real estate cycle, characterized by growing demand, increasing construction activity, relatively stable occupancy rates, and increasing average rates. 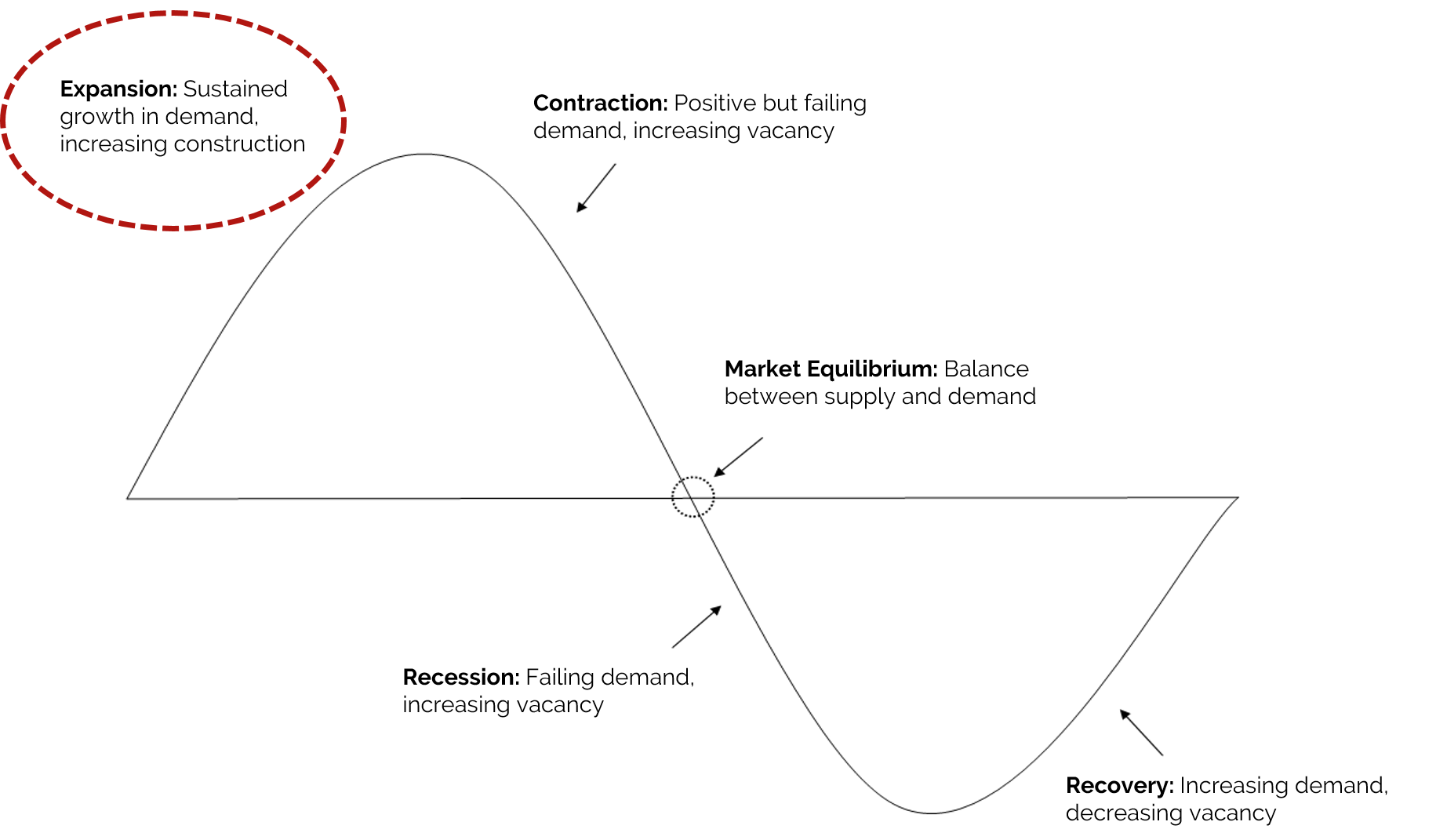 The St. Louis market should continue to present investors with attractive opportunities for investment in new construction and value-add acquisitions, albeit on a selective basis. In the current expansionary environment, investors should take care to exercise increased due diligence and research into the market conditions of individual submarkets, as well as the competitive and operational factors that will determine the upside potential of each opportunity.

Dan McCoy, MAI is the Managing Director and Senior Partner of the HVS St. Louis office. St. Louis is one of over 30 cities across North America where HVS has experts living and working, providing insights and solutions to clients. In the Midwest, HVS leaders are located in Chicago, Detroit, Minneapolis, Nashville, Cincinnati, and Omaha, in addition to St. Louis. Dan, a native of St. Louis, earned his bachelor's degree from Truman State University in Missouri and has front-line hotel experience with Hilton and Denali Park Resorts. Dan is a Designated Member of the Appraisal Institute (MAI) and a certified general appraiser in Missouri and surrounding states. Contact Dan at (970) 215-0620 or [email protected].