In Focus: Udaipur – An Oasis of Potential

The article focuses on the history of Udaipur and progress of its hotel market while providing a brief outlook of the future potential.

Located in the Girwa valley, amidst the desert of Rajasthan, stands the city of Udaipur. The once capital of the mighty Mewar Kingdom, Udaipur is now one of the most sought after leisure destinations India has to offer.  Aptly known as the “City of Lakes”, the scenic Lake Pichola and Fateh Sagar Lake are centres of most of the leisure activity in the city. The atmosphere of royalty can not only be sensed in the palaces and gardens of Udaipur, but by way of the luxury hospitality experience as well. This article focuses on the history and progress of the Udaipur hotel market in addition to a brief outlook of its future potential.

Known for its tourist destinations both domestically and internationally, Rajasthan offers a variety of leisure attractions. Encompassing mountains (Mount Abu), valleys (Udaipur), forests (Sariska National Park and Ranthambore National Park) and the desert (Jaipur, Jodhpur and Jaisalmer), the state has a unique blend of leisure locales (Ref Fig 1.). It is however, the rich heritage and culture shrouded by a sense of royalty, a specialty of the state, which attracts visitors from far and wide. 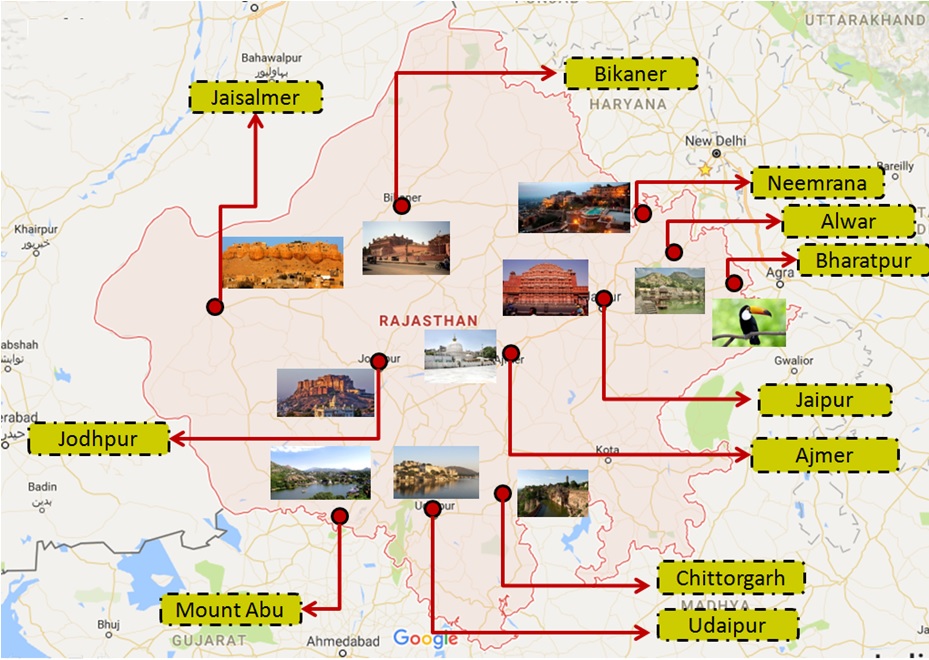 The year 1979 marked the beginning of a new chapter for the city of Udaipur with the opening of the Taj Lake Palace hotel. What began as a conversion of the Jag Niwas Palace, is today one of the most iconic hotels in India, if not the world. The trend of palace conversions into hotels continued, as the Shiv Niwas and Fateh Prakash were converted from sections of the City Palace Complex into palatial hotels. The emergence of tourism as a major economic boon began in the 1980s, but it’s growth was restricted due to inadequate infrastructure such as insufficient connectivity and erratic electricity supply. Lack of air-conditioning limited tourism to a select few months in the year, even as the city’s popularity among travellers continued to grow.

On the back of rising demand for the regal hospitality experience, the Trident and Oberoi Udaivilas made their entrances and modified the definition of timeless luxury hospitality not only for Udaipur, but for hotels across the subcontinent. Tourism, as a major economic sector for Udaipur, rose to prominence in the 1990s; and the city was recognised as one of the most niche hotel markets in India. Demand, still generated primarily by Individual Travellers and Leisure Groups of foreign origin helped hotels maintain high room rates. Furthermore, the idea of luxury hospitality amidst the royal setting, sparked by the giants of the Udaipur hotel market, lives on till date.1

FIGURE 2: A TIMELINE OF BRANDED HOTELS IN UDAIPUR

*Approximate number of rooms in the market

Between 2005 and 2010, the hotel industry expanded rapidly, although for the first time developments were not confined to the Luxury or Upscale positioning. While the Leela Palace, LaLit Laxmi Vilas and Radisson Blu (erstwhile Sheraton) added to the Luxury and Upscale segments, the Fateh Garh and Ramada Resort & Spa were among the first hotels to establish a Mid-Market segment in Udaipur.

Famed for its Luxury hotels, Udaipur (as a leisure market) welcomed  the masses with arms wide open for the first time. Furthermore, a steady growth in domestic demand was initiated owing to better connectivity and availability of hotels at lower price points. Udaipur  emerged as a destination for Group Leisure and Meeting and Events as well, since more hotels now had larger inventories and larger banqueting facilities at varying price points. 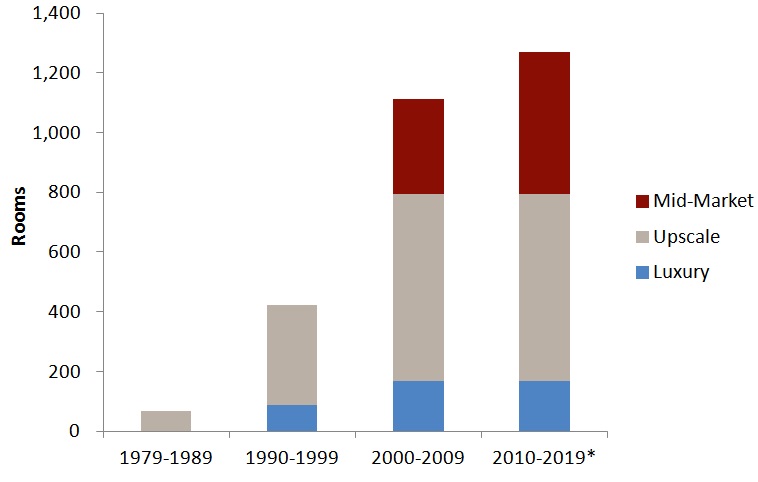 The last five years have witnessed additions to supply such as the Ananta Udaipur, Golden Tulip and Radisson, all of which are positioned in the Mid-Market segment. As compared to the Luxury and Upscale hotels in the city, the lower price offering of the Mid-Market hotels has encouraged visitation from a wider variety of clients primarily in the Individual Leisure Domestic, Group Leisure and Meeting and Events segments, thereby contributing to the overall growth in demand for the city.

The Udaipur hospitality market, traditionally reliant on the patronage of foreigners, has witnessed a slump in inbound leisure demand over the last three years. However, domestic leisure and group demand emanating primarily from Ahmedabad, Mumbai and Delhi NCR have not only compensated for the lower share of foreign demand but helped minimise seasonality as well, providing the market with a higher year-round demand pattern. Daily flights to Mumbai and Delhi, courtesy Indigo airlines, were inaugurated in November 2015 and are expected to support the already improving annual demand. 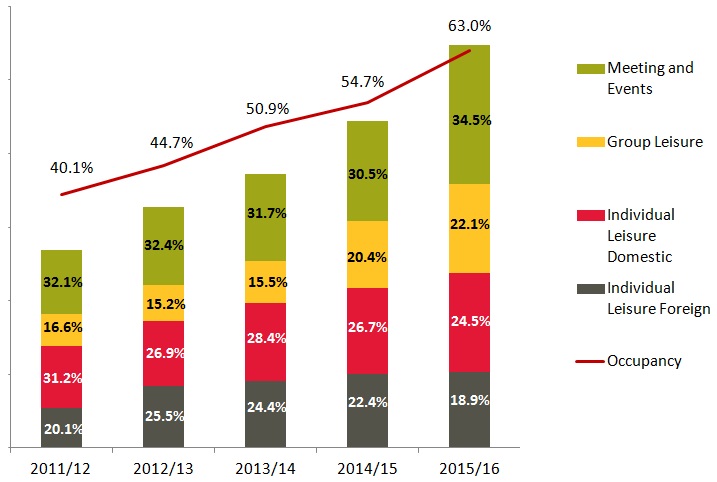 Moreover, the transition to a Group Leisure and Meetings and Events-focused market over the last five years is indicative of a flexible leisure market and its diminishing dependence on transient tourism as the prime source of demand. The Wedding segment (included in Meeting and Events) alone raises an average revenue of `60 lakhs-`3.5 crore per wedding for a two-night gala, which typically includes both rooms and food and beverage (F&B). Keeping in mind the elaborate wedding festivities expected of Udaipur hotels, F&B banquet rates command a noteworthy premium, with the banqueting Average Per Cover (APC) ranging between `1,200-7,000 per person.

The true strength of the market, however, lies in the average room rate (ARR). The top three Luxury hotels of the market – Taj Lake Palace, the Oberoi Udaivilas and Leela Palace – not only command the highest rates in the market but their ARRs are among the top 20 in the country.

Overall, Udaipur commands a higher ARR as compared to other leisure markets across India (Ref. Figure 6), and is significantly more than the country-wide average rate for five-star deluxe hotels.2 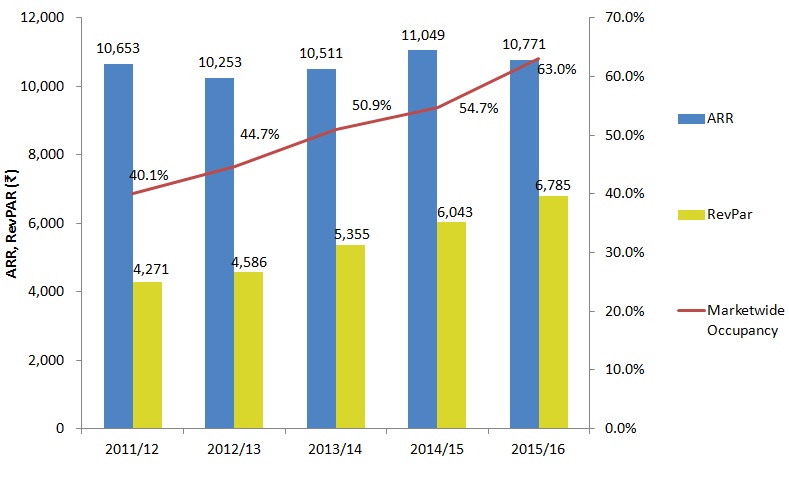 Fluctuation noted in the ARR over the last five years (Ref. Figure 5) may be attributed to the continuous addition of Mid-Market hotels at a lower price point as compared to their Luxury competitors. Despite the variation in ARR, marketwide room revenue has recorded a 15.6% compounded annual growth rate (CAGR) over the last five years. 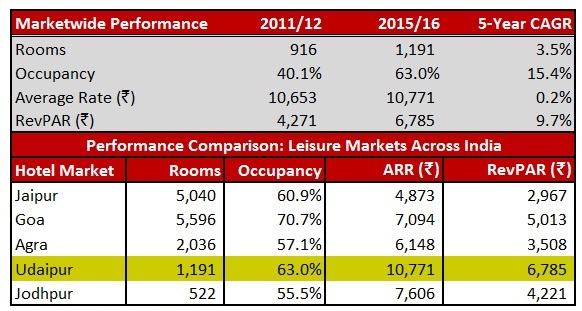 Furthermore, the ‘tag-team’ effect of a strong yet flexible ARR and growing occupancy has ensured growth in marketwide RevPAR, which having exhibited a stark upward trend from 2011/12 to 2015/16, is one of the highest in the country today.

The State Government’s “Resurgent Rajasthan” campaign has recognised tourism and hospitality as one of the focused sectors of investment for the state. Based on their forecasted growth in tourism, Rajasthan is likely to face a shortfall of approximately 36,000 hotel rooms by the year 2021. In addition to development of hotels, the government has recommended development of adventure sports activities, golf courses and convention centres while improving existing tourist circuits and monuments through Public-Private Partnership investment schemes.3

The government has emphasised the advancement of specific tourist destinations in the state. Udaipur, among other prominent cities, has been proposed as a centre of development. Establishment of a golf course, night-viewing of monuments to incorporate summer tourism, eco-tourism and enhancement of the Jaisamand Lake are some of the recommended projects by the state government for the city. On the basis of our own research we find that hotels in Udaipur are indeed reaping rewards.

The time for investment into hotels in Udaipur is ideal on account of market performance and demand trends, and the prevailing country-wide hospitality upcycle as well. The 2016 Hotels in India: Trends & Opportunities report indicates a similar outlook for leisure destinations across India, highlighting the need for a paradigm shift in realising their true potential – evident from our case presented on Udaipur.

A Glimpse of Tomorrow

The composition of the market, going forward, is likely to change as we anticipate the addition of approximately 800 rooms by 2020/21. Accounting for both new hotels and the expansion of existing ones, our research indicates that roughly 47% of future supply is positioned in the Upscale space with the remaining 53% contributing to the Mid-Market segment. Future supply also indicates that the once primarily Luxury and Upscale market is likely to be dominated by Upscale and Mid-Market hotels in the next five years, provided developments in the pipeline are completed as planned.

On the demand front, we foresee a surge in demand from the Group Leisure and Meeting and Events segments. Looking ahead, we are of the opinion that events, group leisure demand and weddings in particular will pave the way for a fruitful future. Hotels in the pipeline are likely to induce demand from these groups as well, bolstering demand and minimising the impact of supply.

As the Indian hotel industry enters an upcycle, we anticipate robust market performance for Udaipur. Taking into consideration the growing demand and limited future supply, hotels in Udaipur would be wise to take advantage of these profitable conditions and grow average rates.

As a hotel market that specialises in royal-themed, custom-tailored hospitality experiences, Udaipur is considered as one of the prime experiential destinations in the country. The market is currently registering robust demand, declining seasonality and healthy marketwide performance, all of which are indicative of the optimistic and lucrative hotel market conditions. HVS strongly believes that Udaipur has great potential and we hope that it can achieve greater heights on both national and global platforms.  There is great scope for further development of hotels in the city. Having forecast the need for advancing the hospitality industry in Rajasthan and pledging support to developers, the state government is certainly on the right track. The time for investment in hotels in Udaipur, ladies and gentlemen, is now.

The article focuses on the history of Udaipur and progress of its hotel market while providing a brief outlook of the future potential. %%ViewCount%% Views Comments
Share:
Subscribe To Newsletter