Located along north Florida’s Atlantic coast, Daytona Beach offers over 23 miles of beaches and a climate that calls to millions of tourists year-round, according to the Daytona Beach Area Convention and Visitors Bureau (DBACVB); the area has been a world-renowned vacation destination for over a century. Daytona Beach hosts seasonal NASCAR races and Bike Week, a motorcycle event that brings in approximately 500,000 people every March. The city is also home to the annual (Ladies Professional Golf Association) LPGA International and features two 18-hole courses and the LPGA headquarters. In addition to tourism, health care, retail, manufacturing, and education support the Daytona Beach economy.

The following HVS Market Pulse report lays out the foundations of Daytona Beach’s demand generators and a looks into the future of the local hotel market.

The second phase of the mixed-use development project, "One Daytona," is under construction across the street from the speedway and is slated for completion in 2017. The 181-acre site will feature a major entertainment complex with Bass Pro Shops and Cobb Theaters as anchors; it will include 1.1 million square feet of shopping, dining, hotel, theater, condominium, and office components. The complex, once complete, will reportedly create more than 4,000 jobs.

Given Daytona Beach’s vibrant public face of tourism, it may come as some surprise that Volusia County is home to more than 400 manufacturing firms. Major employers include Covidien, Boston Whaler, and Sparton, and new companies have entered and expanded within Volusia County in recent years. After investing significant capital to upgrade its existing facilities in 2009, AO Precision Manufacturing, a partner to the world’s leading aerospace and defense companies, expanded its operations on an adjacent site in 2011. Teledyne Oil & Gas opened a $4.5-million, 52,000-square-foot global research and development center adjacent to its existing headquarters in October 2013. In July 2015, World Class Distribution Inc. opened a 600,000-square-foot distribution center for the Trader Joe's grocery chain. The $56.5-million project hired 400 employees right out of the gate, with plans to employ some 1,000 workers in the near future. 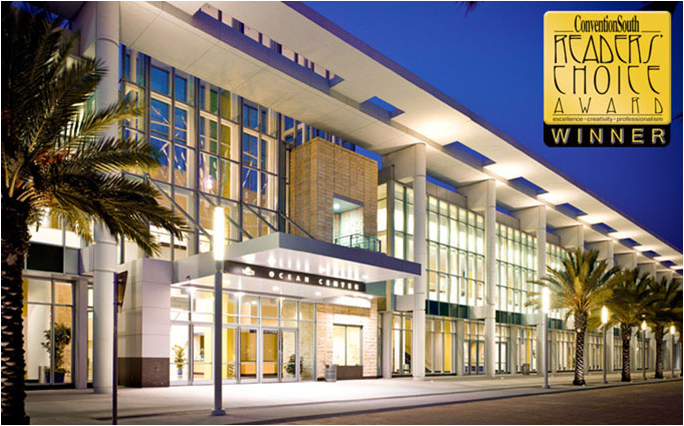 The annual number of events and attendees at Ocean Center declined from 2006/07 through 2008/09, in large part because of the renovation and expansion of the convention and exhibition facilities during that period. Event and delegate numbers grew significantly between fiscal 2009/10 and 2011/12. Growth slowed in fiscal 2012/13; however, according to the Daytona Beach Convention and Visitors Bureau, statistics for fiscal 2013/14 and 2014/15 illustrate lower attendance despite growth in total events. Several events, including the World Trampoline and Tumbling Championships, which ran for 17 days, were hosted at Ocean Center in 2014.

Looking forward, Shriners International has selected Ocean Center to host its annual convention, the Imperial Session, in 2017 and 2018, marking the first time in over 60 years that the organization will hold the event in the same location for two consecutive years. The five-day event is expected to draw approximately 20,000 attendees and have an estimated economic impact of $8 million each year.

Annual Events at Ocean Center on the Rise, while Attendance Declines in Recent Years 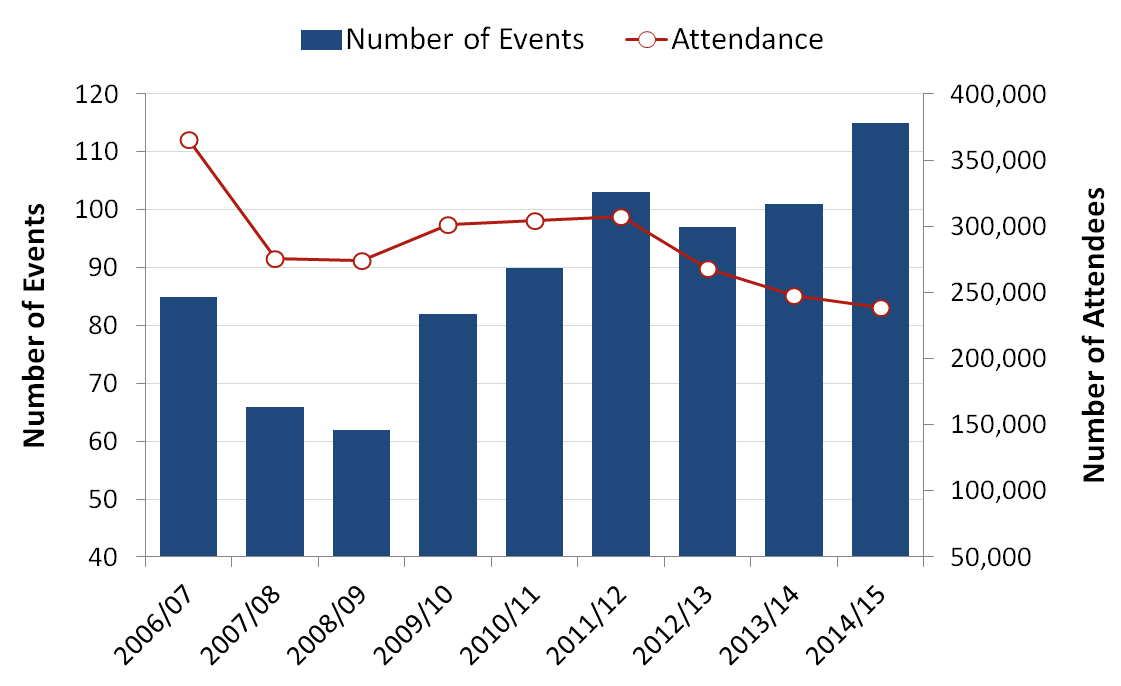 Of the 7,423 hotel rooms in the Daytona Beach market, approximately 47% belong to branded properties, with the remaining 53% operated independently. Of the 3,513 branded rooms, Hilton Worldwide hotels represent 37% of the market, while InterContinental Hotels Group (IHG) and Wyndham Worldwide each hold 15% of the market share. Best Western International, La Quinta, and Marriott International each represent a notable portion of the branded rooms in the market, ranging between 6% and 8% market share. 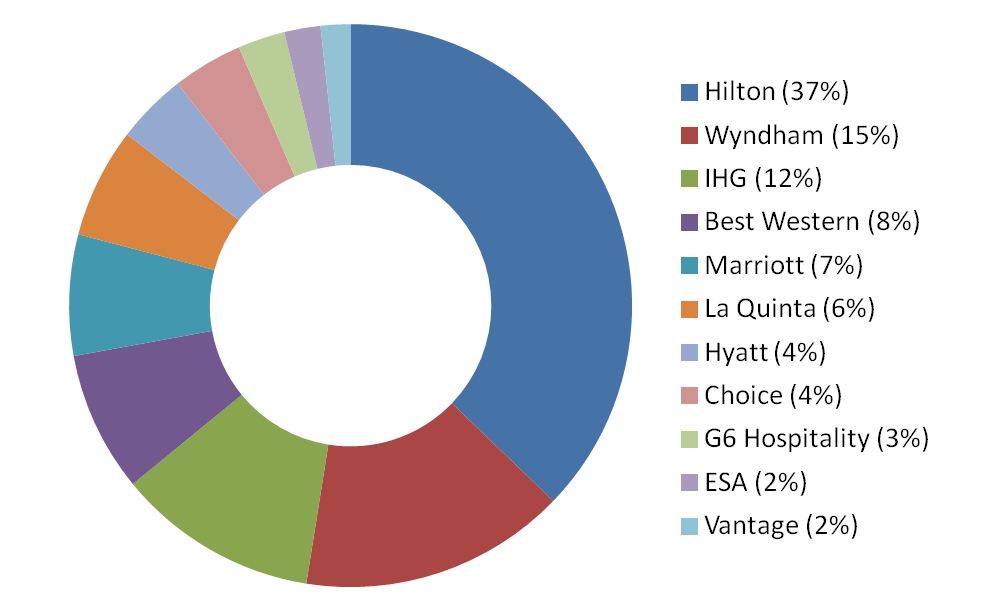 Leisure demand in Daytona Beach has rebounded in recent years, with the Daytona 500, Bike Week, and Spring Break attracting millions to the area each year. A new concert event, the Country 500, will be held at the Daytona International Speedway over Memorial Day weekend in 2016, generating additional tourism. Spring Break vacationers remain a cornerstone of leisure demand in Daytona, though the bulk of this subset of demand is geared toward economy and budget hotels. 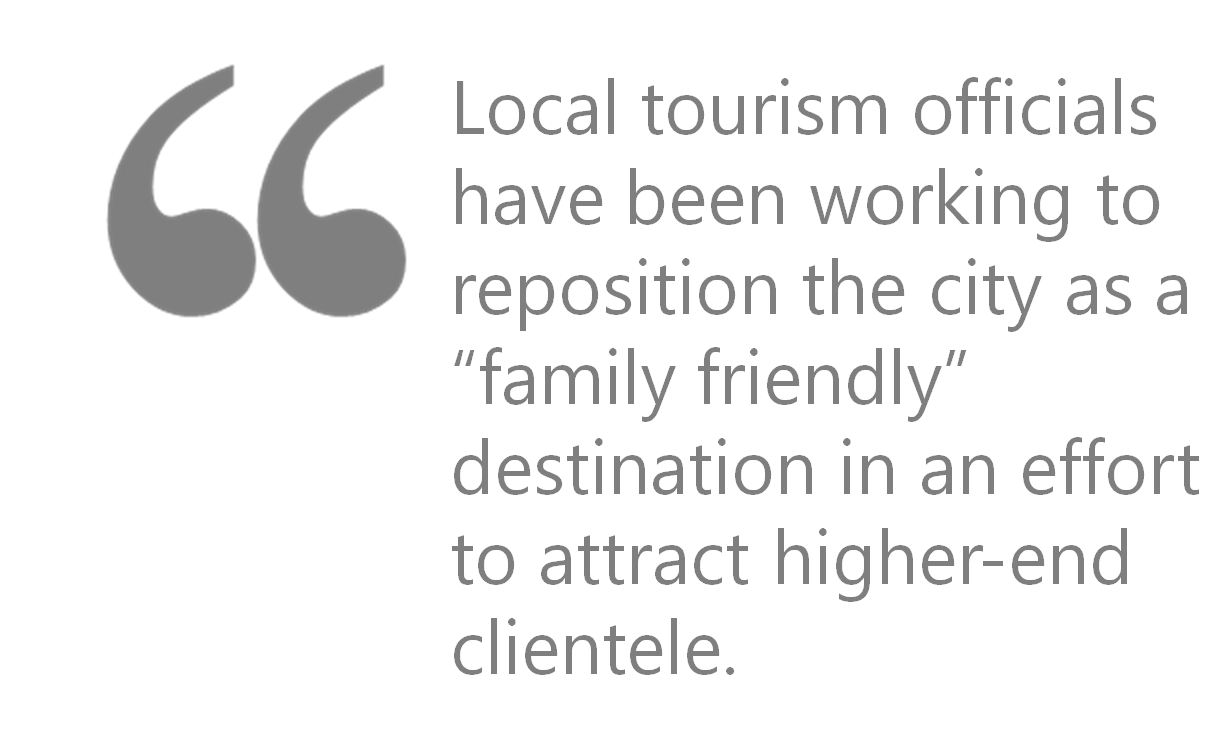 Local tourism officials have been working to reposition the city as a “family friendly” destination in aneffort to attract higher-end clientele. According to the DBACVB, travelers seeking an upper-upscale hotel option have previously gone away unaccommodated, and the market has lost these visitors to nearby destinations such as Orlando. With the addition of several upper-upscale hotels, the market should be able to capture some of this demand from nearby markets. We expect the leisure segment to illustrate moderate gains as discretionary spending increases and the quality of hotels in the market improves.

Meeting and group demand is primarily generated by Ocean Center, which booked $16 million in revenues in 2014 with the addition of several events. According to our market interviews, this positive trend continued in 2015 with the booking of some major athletic events. Daytona Beach will be the smallest city ever to host a Shriners convention, which typically draws between 15,000 and 20,000 Shriners and their families for a five-day program; as noted above, the Shriners have booked Ocean Center for back-to-back conventions in 2017 and 2018. Furthermore, the increase in hotel supply surrounding Ocean Center should support additional gains in this demand segment.

The area’s expansive manufacturing and healthcare facilities drive commercial demand in Daytona Beach. The recent expansions of Florida Hospital and the Daytona International Speedway have been major sources of commercial demand for the hotels in the surrounding area because of the increased number of visiting practitioners and construction workers. Additionally, a Florida Department of Transportation project on the Interstate 95 corridor has brought additional commercial demand to the market. Ongoing highway construction should support modest increases in commercial demand in the near term; however, upon the project's completion in 2018, this demand is expected to decline slightly.

Daytona Beach's treasure trove of year-round tourism has historically underwritten the area's overall economic strength. Tourism subsided during the recent recession, and numbers were further depressed by Hurricane Charley and local government’s efforts to reposition the market away from its infamous Spring Break image. The past two years have brought a revival, and the market continues to enjoy economic recovery that extends to commercial and meeting and group hotel demand.

Furthermore, the renovation and expansion of the Daytona International Speedway, the development of the adjacent entertainment complex, and the improving competitive standard of the area’s hotel inventory should further boost tourism to Daytona Beach, supporting an optimistic outlook on the local economy and hotel industry in the near term.