Traditionally associated with its manufacturing trade, Guadalajara’s enhanced international standing as recent host of the Pan Am Games and site of the upcoming Digital Creative City is generating hotel demand from broader channels.

Guadalajara, known variously as the second-most-populous city in Mexico, the cultural heart of the country, and the “Pearl of the West,” boasts one of Latin America’s most prosperous and fastest-growing economies. A corporate presence has been solidifying in Guadalajara for years, with the Prolongación America and Andares areas boasting the most recent developments and initiatives. Aftershocks of the global economic recession and the H1N1 influenza outbreak hit Guadalajara in 2009, but businesses—including hotels—have largely bounced back. Last year, the city hosted the international Pan American Games, and more far-reaching, transformative events are underway or on tap to bring tens of thousands of visitors to area hotels. The growing corporate presence, along with Guadalajara’s selection as Mexico’s Digital Creative City, are set to change the city’s standing in Mexico and Latin America over the next decade. The following article looks at the foundational elements of Guadalajara’s economy, as well as some potential catalysts for boosting hotel performance in the near future.

Pan American Games
The Pan American Games brought an inrush of activity to Guadalajara, not only as the games and ceremonies commenced in October of 2011, but in the years and months leading up. Guadalajara had been making preparations for the 2011 Pan American games since the city was selected as host in June of 2006. Originally budgeted at $250 million (USD) for new and improved city infrastructure in support of training, competition, and visitation related to the games, the expenses grew to three times that size for sporting venues alone. The city’s transportation array received a huge boost, with improvements to highway routes and a $120-million (USD) renovation of the airport.

Plans for new hotels of all service levels went into action almost immediately after the city’s selection as host for the Pan American Games, and more than 1,500 rooms opened between 2009 and September of 2011. Over 6,000 athletes from 42 countries participated in the games, with the largest international delegations from Brazil, Canada, Argentina, Cuba, and the U.S. Not including athletes, more than 148,900 visitors1 from outside of the Guadalajara metro area needed hotel rooms, and more than 340,000 room nights were generated over the length of the games. The games’ total economic impact on Guadalajara amounted to $2.8 billion pesos, or over $223 million U.S. dollars.

Technological Innovations
Like other major economic centers in Mexico, Guadalajara is highly integrated with the U.S. and Canada through the North American Free Trade Agreement (NAFTA). The ensuing flow of commerce since the mid-1990s has led to sustained economic expansion in Guadalajara, primarily in manufacturing, though more recently in information technology. The city is also known as Mexico’s “Silicon Valley” and is the country’s foremost software producer, as well as a leading producer of electronic and digital components. IT giants such as General Electric, IBM, Intel, Hitachi, HP, Siemens, Flextronics, Oracle, and Solectron have a presence in the area. These and other companies produce and distribute components for everything from computing and telecommunications to consumer, medical, and automobile electronics.

One of the major projects in preparation for the Pan American Games was the building of an “athlete villa” complex to house participants. An area of approximately 234 hectares (578 acres) within Guadalajara’s historic center and around Morelos Park was set aside for this purpose, but the villa project was subsequently relocated to another section of the city. This left the original area available for development and paved the way for Guadalajara’s Digital Creative City project. Supervised by the Massachusetts Institute of Technology, the Digital Creative City will comprise a cluster of companies focused on digital animation and video-game design, digital cinema and film production, virtual communications, digital sound and imaging, interactive design, and digital system engineering. Companies that have already shown interest include Time Warner, Sony, Disney, PIXAR, DreamWorks, and Electronic Arts.

Other successful “digital city” projects around the world include Digital Multimedia City (Seoul), Tech City (London), TwoFour54 (Abu Dhabi), and [email protected], Districte de la Innovació (Barcelona). At a total investment of over $10 billion, the Digital Creative City project is expected to generate more than 10,000 jobs in the market. The revolutionary project would give Guadalajara the advantage that it’s been seeking, which is to be more competitive with the corporate-oriented Mexico City and the industrial-oriented Monterrey.

A variety of participants are currently putting the Digital Creative City master plan into action. According to officials involved in the project, the configuration of office supply will comprise mid-rise office buildings categorized as Class A/A+ and B; however, the exact amount of office inventory that will result from the project has not been determined. In many mature U.S. office markets, the relationship between rentable office space and room nights generated can be as high as 16 room nights per 20 to 25 square meters of office space. HVS’s analysis of both mature and new, urban and suburban office markets within Mexico City, including Reforma, Santa Fe, Bosques de las Lomas, and Interlomas, shows that this relationship accounts for 4 to 5 room nights per 20 to 25 square meters of office space, and the same can be assumed for Guadalajara.2

While the exact amount of hotel demand generated by the Digital Creative City project per square meter of office space cannot yet be determined, we have estimated a range of demand that the project could generate within the Centro Histórico and Chapultepec submarkets. The following tables illustrate the current distribution of rentable office space in and around Guadalajara, and the potential room nights generated by the addition of 20,000 square meters of office space in the two submarkets. 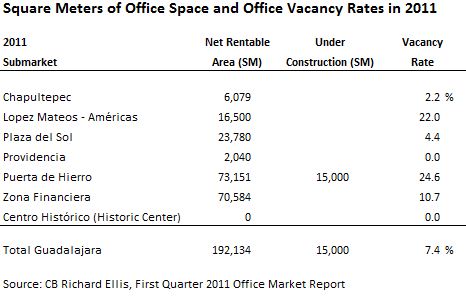 This scenario assumes that a new mid-rise office building in the area would be six stories tall, with each story comprising 1,000 square meters, and that the ground floor would be used for the reception area and retail space (vs. rentable office inventory); hence, a new mid-rise office building would bring 5,000 square meters of rentable office space to the local office inventory. With four such buildings, the Digital Creative City project’s addition to the office inventory would total 20,000 square meters. Based on the office to hotel demand ratio noted above, as this office inventory was phased in and absorbed, one could anticipate demand generation of approximately 4,121 occupied room nights. If the complex comprised eight buildings with the characteristics noted above, generated hotel demand could be estimated at 8,242 room nights, and so on.

While the configuration and size of rentable office space would likely vary from the parametric approach noted here, this analysis provides some insight into the impact the planned Digital Creative City complex would have on hotel demand in Guadalajara. The Centro Histórico submarket would likely see the greatest positive impact, as it does not currently offer Class A/A+ and B rentable office space. According to officials involved in the Digital Creative City project, the master plan will also include lodging developments, primarily focused on full-service and/or boutique-oriented hotel alternatives.

Hotels
The following table illustrates Guadalajara’s room supply and occupancy figures among one- to five-star hotels in 2009, 2010, and 2011.

Overall, hotel occupancy improved year-over-year from 2009 through 2011. Not surprisingly, hotel performance in Guadalajara reached record highs during the two weeks of the Pan American Games in October of 2011; however, oversupply has impacted both occupancy and rates in the greater market during shoulder and low seasons. Nonetheless, the games, coupled with commercial and group demand, especially that generated by Expo Guadalajara’s record-high attendance, contributed to occupancy increases in 2011. Hotel owners and managers report that average rates in Guadalajara have been impacted by the surge of hotel supply in 2009, 2010, and 2011, with some full-service and boutique hotels experiencing declines of up to 6%3, according to HVS estimates.

Rooms supply is anticipated to increase as the Digital Creative City project takes shape and to continue to grow over the next decade, especially within the full-service four- and five-star categories. Average rates in Guadalajara are also expected to climb as high-quality, national and international hotel brands gain new confidence in Guadalajara as Mexico’s Digital Creative City.

Conclusion
The importance of the Digital Creative City project cannot be overstated when it comes to the outlook for Guadalajara’s future, just as the importance of NAFTA belongs in any discussion about the city’s modern past. Securing the Pan American Games was a major coup for the city in 2011, and upcoming events on the world stage aim to capture even more attention, not to mention visitation. Guadalajara’s hotel industry is poised to reap major benefits from this activity across multiple economic sectors, an outlook further supported by anticipated domestic and foreign investments in the area once the Digital Creative City comes online. The debt crises in the U.S. and Europe over the past several years linger on, and the threat of another economic correction still looms. Still, Guadalajara’s businesses, including hotels, are making confident strides.

1 Guadalajara Chamber of Commerce, Pan Am Games Economic Impact Study
2 The higher ratio of room nights to office square meters in the U.S. vs. Mexico has to do primarily with the higher amount of corporate travel in the U.S., as well as the extent of travel to 5th and 6th tier cities, whereas corporate demand in Mexico is generated primarily by international corporate travelers to primary, secondary, and tertiary cities.
3 As a compounded decline over the 2009-2011 period

Traditionally associated with its manufacturing trade, Guadalajara’s enhanced international standing as recent host of the Pan Am Games and site of the upcoming Digital Creative City is generating hotel demand from broader channels. %%ViewCount%% Views 1 Comments
Share:
Subscribe To Newsletter